Rocks, guns, armor and TOP-100 of IndieDB Indie of the Year Awards.

Dear friends! First of all, we would like to thank everyone for your votes because Exoplanet: First Contact is one of 18 RPGs in TOP-100 of IndieDB Indie of the Year Awards. 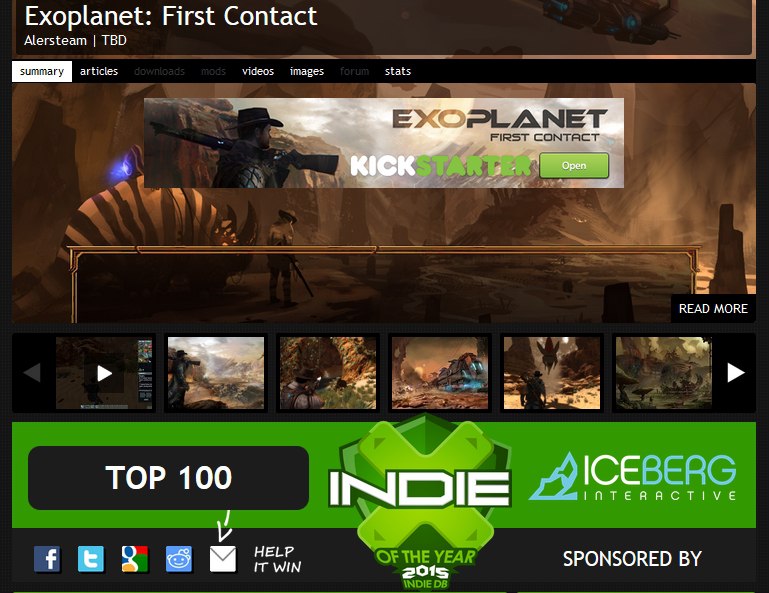 But now we need you to vote for us one more time if you are still in love with space western old-fashioned RPGs. There are 10 other RPG games among upcoming role playing games: some of them really great and at least one of them actually isn't RPG at all (somehow this is a sandbox game).

It is very important for us to spread the word and to get attention to Exoplanet, to show it to the world as a game with huge potential. We're not looking for a first or even fifth place but we would like to be a great upcoming RPG among the others RPGs in TOP-100. Thank you very much.

This update came up to be a bit long and a little late, since we wanted to reach a certain important milestone and show you the results of our hardworking art director and lead 3d artist, who were working on such important environment details like rocks and cliffs. 80% of K'Tharsis' surface is a rocky desert, and we wanted to build the first levels of our game in this particular biome, to set the player up for a western style at first, before throwing him into exotic alien landscapes. The results of our work are described in detail below, followed by first demonstration of the modular armor system and general ideas for weapon redesign. We're hoping that both players who know a thing or two about the process of game development and those who are more knowledgeable in this regard would find that kind of information interesting. Have a nice read!

K'Tharsis' rocks: on our method of landscape design and decoration

In our previous updates we've already talked about the process of creating a level and also showcased our heightmap editor that supports terrain patches with holes in them, which allows us to create a more complex geometry such as caves, overhangs and other types of advanced land patches for player to walk on. However, the current generation of gamers wouldn't be satisfied by a simple heightmapped terrain painted by a couple of different textures as it was done in years before 2006, since generic hills and valleys wouldn't look convincing even with the help of advanced terrain projection algorithms. Surely, we at Alersteam wouldn't want to create such simplistic pathetic excuses of levels. Our goal is to create locations that are fun to explore, that have a vertical aspect to them as opposed to plain old and boring runway strip level design, that literally screams "You've reached the end of the world" at you, when you hit its invisible borders. All Exoplanet’s locations will have natural boundaries that don't make the player feel as if he isn't allowed to go somewhere because of, ahem, reasons. 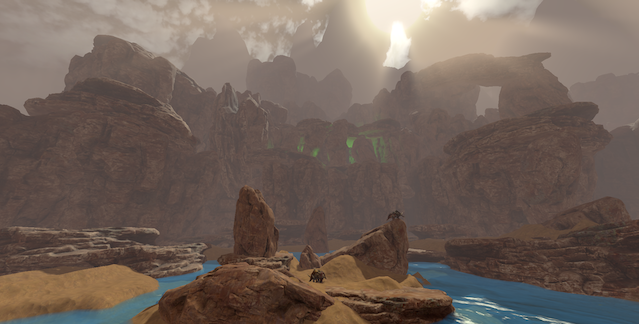 WIP: part of our location built with modular rocks and walls

But you can't really make an interesting level with soft hills made by heightmaps even with the help of generic rocks. When a level designer wants to create a more interesting terrain with valleys, ravines, uniquely shaped rock formations and whatnot, it's impractical to achieve this with engine level editor. This is where custom meshes come to the picture, where particular points of interest are created as unique meshes. When working with artificial levels, technical objects, various sorts of machinery etc a large number of different meshes could be created which are then assembled into a specific piece of machinery or a laboratory of some sort, not unlike LEGO. Assembled from simple pieces, in able hands it could be used to create stunning structures.

Most of the games which inspire us are using the same level creation process or some sort of a variation of it. In our case, it allows us to work mostly without relying on 3rd-party editors for shaping the complex landscape and our terrain geometry. We can just generate a heightmapped patch of a desired size (or several of them), mold it to our desire, cut out holes for caves and various unique locations (a cavern with openings in the stone ceiling for instance, or a cave system at a side of a canyon), and decorate the level with meshes, decals etc, all without leaving our editor. In theory, a modmaker would be able to open one of our existing levels, and be able to change the terrain, add/delete objects and have access to all of our assets right there in our editor, as well as the possibility to add their own assets, import textures, and even create completely new levels from scratch. 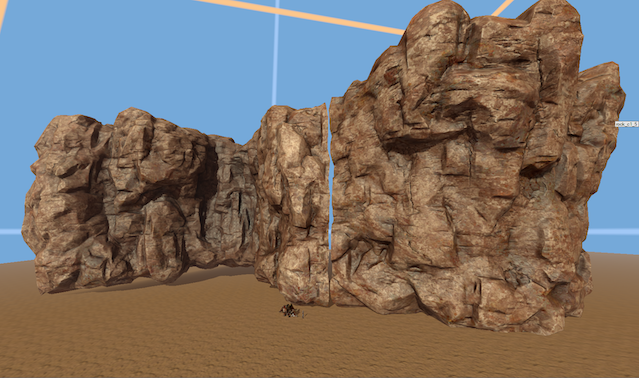 We've started by creating a couple of rockface drafts to help us decide on a final form and by working on a level prototype to find out the scale of assets and distances from which they should be visible without fidelity deterioration. First of all we've made some convex and concave walls for the level with a starting height of about 60m, since this is approximately the average height difference in our level’s terraces. The mesh set should contain at least 3 of those meshes for each of those big walls or cliff faces, if you will. They could be easily extended if needed.

Each of these meshes has a unique diffuse, normal and specular maps in 2048x2048 resolution. We could have used tileable textures of a lower resolution, but a unique texture looks better and emphasizes rock edges and overall relief. Despite the fact that modern PCs have a plenty of VRAM to handle large textures, we don't want to be too wasteful by making the resolution of our texture maps too large, since in this case the player would usually see these meshes from a distance. Natural barriers that the player would be able to come much more closely would be smaller in size and respectively with a larger visible texture fidelity. Additionally these huge U-and C-shaped walls are modeled as one-sided meshes to lower the polygon count in the scene (the player is not supposed to see their backside), though they are shaped in a way that makes it easier to combine them with each other and with the terrain without visual inconsistencies. 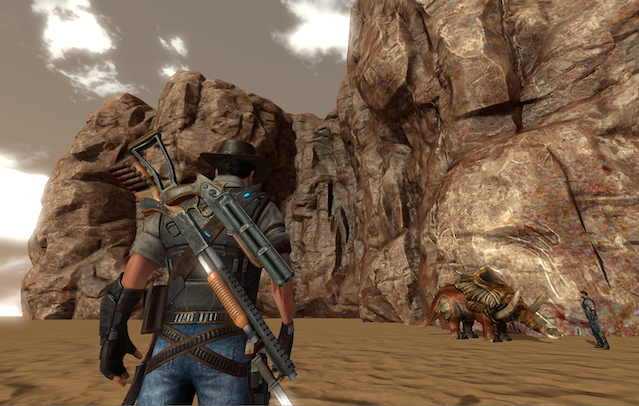 Flat rock formations are also needed for hiding horizontal seams and building ledges as well as decorating lower cliff faces. These ones are examples of the middle sized meshes, they are limited by 15m in height and from the player's point of view the texture is more detailed in terms of texel to screen pixel ratio. 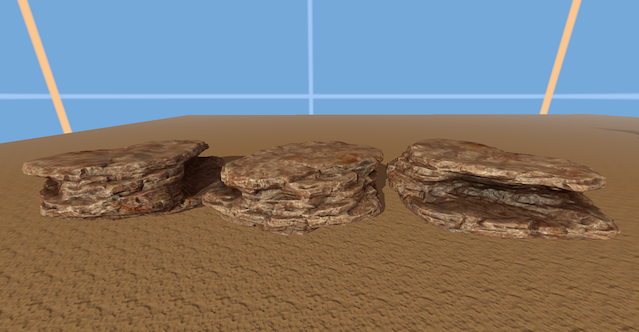 We've also thought about introducing some variation into such surfaces that look the same for example a protruding rock formation. That's why we're also making separate rock assets we call I-shaped rocks or simply I-rocks. They are also suited for a larger relief and are about 40m in height, which is of course also could be scaled up or down to some extent. I-rocks can help to decorate larger natural formations or work as standalone assets if needed. We're planning on making a whole set of such rocks to give our level designers and modders a higher degree of freedom, and more building blocks for their creative experiments. 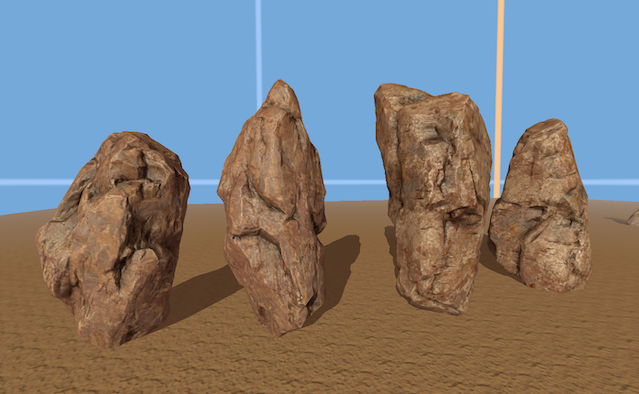 I-shaped rocks can be rotated to show different looking sides

It's also important to note that our rock texture doesn't have a particular direction. This was made deliberately, and allows us to rotate those assets any way we want. They don't have a visible "up" or "down" sides which makes it easier to fit them into any creative arrangement one might think of. This approach does have a downside of being more generic and less realistic, but in future, due to decals and lighting it won't be noticeable. We're also using a well-known detail texture technique, for those who like to check out cliff surface very closely. 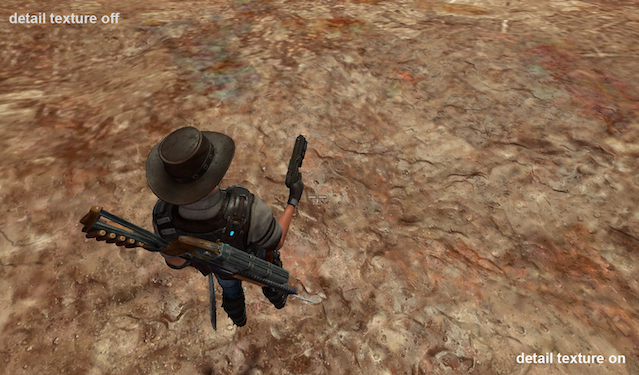 Detail texture applied to the large mesh: the difference is clearly visible

Needless to say, unique rock formations will have their own unique meshes, like natural bridges, peculiar obelisks, arcs etc, though those aren't a priority at the moment. At the final stage of building the level all seams should be well-hidden beneath smaller details like a bunch of smaller boulders and rock slides, broken cliff pieces, flora etc. This way we're trying to create a more naturally looking environment, where the annoying seams and transitions between traversable terrain and natural vertical boundaries are almost unnoticeable. 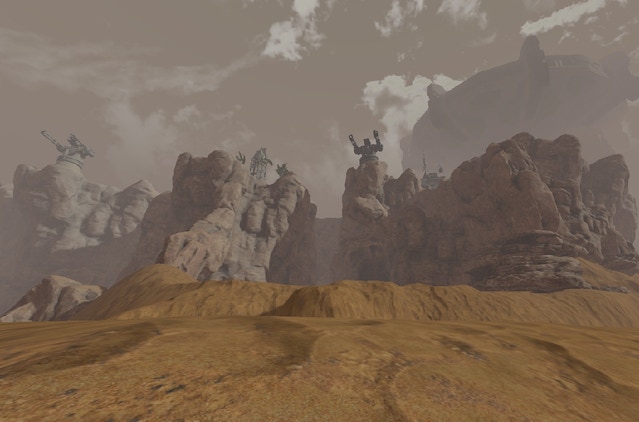 One of the priority tasks for our artists lately is weapon and armor redesign. We aren't satisfied with current models, which aren't always optimized for 3rd person view in respect of geometry and detail emphasis. A lot of things that look good from first person aren't even noticeable from 3rd person view, which means that armor and weapons need to be reworked, some of the details made larger and more noticeable, though without overdoing it to the point of a cartoonish look of course. 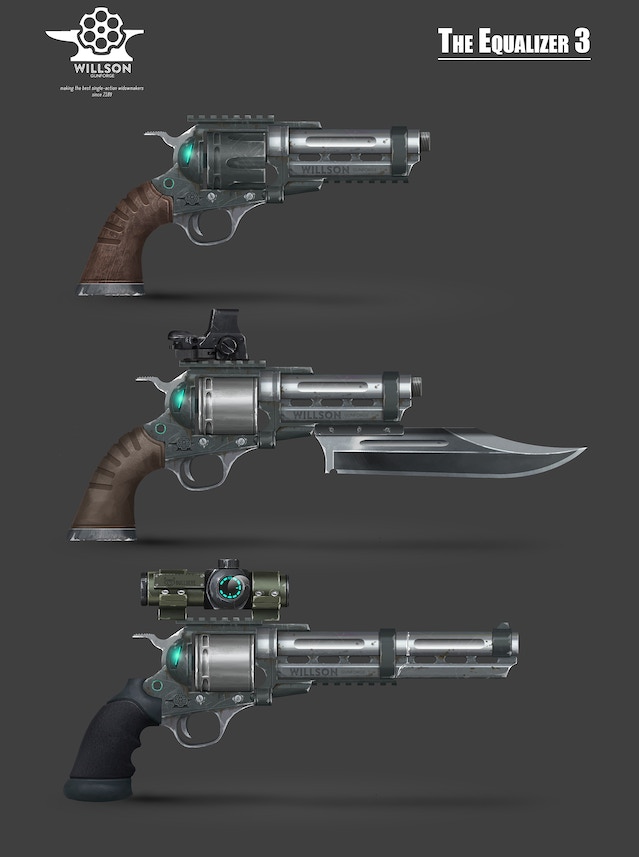 Attacked by humans, cyborgs, aborigines and other aliens? The Equalizer can always even the odds

Our art director Ivan tried to find a middle ground between western style and Sci-Fi decorations, to get a good-looking compromise between a bulky game-y style and realism. As a base for our first weapon we've taken a classic Colt 1873 (or Ruger Blackhawk as a more modern analogue).

In the world of Exoplanet, where the Terran metropole isn't exactly eager to supply the latest models and ammunition to its mining colonies, which could be used against the central administration in revolts, an ancient craft of custom small-scale arms production of some of the well-known and time-tested classics is revived. It makes sense to assume, that local craftsmen aren't going to be satisfied by merely replicating the old designs of single-action revolvers. Thus, Mr. Wilson equipped his Equalizer with a left swing out cylinder, and his sons added some of the more modern features, such as rails for additional gun attachments and a sensor cylinder lock button, which also indicates the presence of bullets in the chamber (glows red if one bullet left). We've made some of the details larger and more noticeable in the design, which doesn't make much sense in reality, but looks good in a video game.

We'd like to showcase some of the renders of modular armor. Currently this system is in active development, so that in the future we would be able to combine various animated large objects (in other words, flexible) such as pants and body armor as well as decorating them with rigid objects and accessories like hats, sunglasses, helms, bracers, backpacks and body armor gadgets. 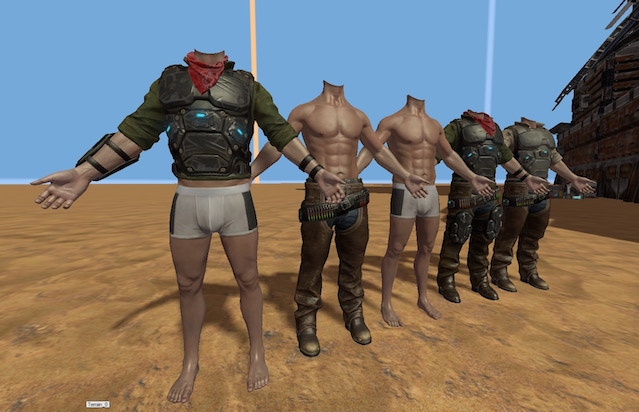 Modular light and medium bounty hunter armor. Parts can be combined with other sets 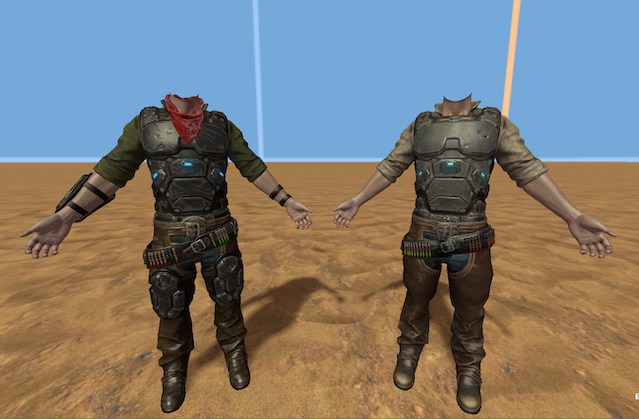 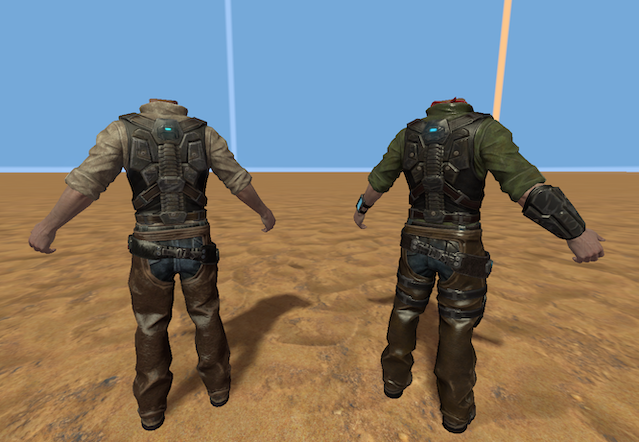 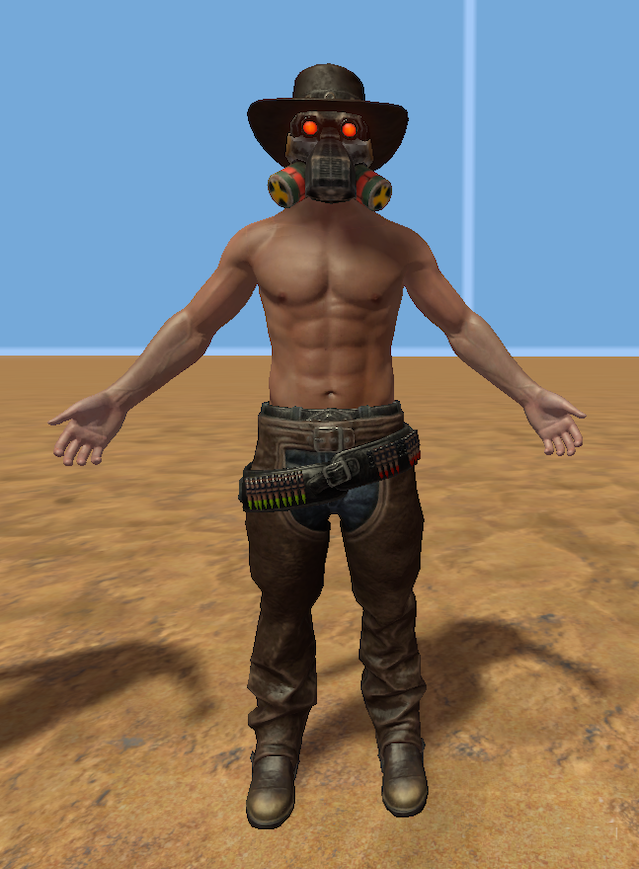 So don't be surprised if somewhere in K'Tharsis' plains you stumble upon a raider or a merc with provocatively naked chests, or if you take a resting bounty hunter by surprise, you might have the chance to check out his trendy Sci-Fi underwear.

Let's conclude the update on this amusing note, and thank our backers and players for their support of our development of Exoplanet. If you found it to your liking, don't forget to share this update with your followers on Kickstarter.com" target="_blank">Twitter and/or Facebook. Even though the spirit of holidays is already knocking on our doors, our team isn't going to abandon its duties. We'll see each other soon! 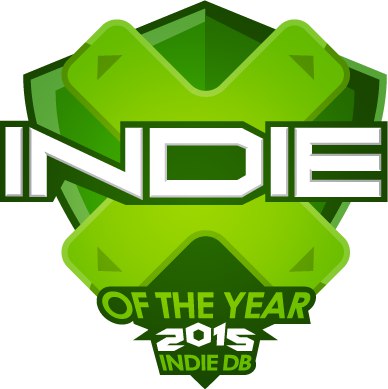