The long-overdue pathfinding update is finally out. It was a big one and took quite a while as it involved completely tearing out and replacing the pathfinding system.

This is purely a technical update, and adds no gameplay features. Sorry about that, but it now paves the way for some fun-filled updates coming up next.
This was a big overhaul, so new bugs may have been introduced. Pathfinding is not a pretty subject when you are working on a seamless game world.

The update should download automatically when you next start up the game, or via Desura.

-import squad to a new game now relocates your squad to the starting town.
-you can now set mouse horizontal/vertical speeds, use a negative number to invert the mouse control.
-Custom made launcher without any invalid options to choose.

-There is currently no character collision detection so they all stand in the same spot, I will add this back in asap.
-Splinting doesn't always work, I'm going to make it a separate action in the next update. 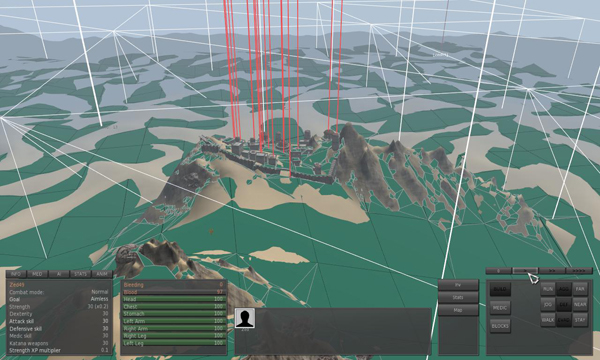 A debug screenshot of all the data thats needed in the background for the pathfinder.

PLANNED FOR NEXT TIME

-Next I'm going to start on purchaseable buildings, and using them for basic stuff like sleeping and storage.

Thought that debug was oceans... :(

oh so you ARE still alive :P

Just too let you know... I dont know if it is meant too be like this but desura didnt show an update but it updated when I started it from desura.

great, keep up the steem :-D

Awesome.
Look forward to the next update now :D