This update the bring a lot of new features to the game, like a new combat interface and an improved AI.

This is a new and important update and introduce new features and build the base for further improvement.

I worked hard on it and I'm happy with the result, this update brig a lot of new features:

I receive a lot of feedbacks regarding the combat interface, the previous one was unintuitive and confusing, that's why i changed it and take inspiration from other games

In the previous interface you have to press one of the action buttons and after chose a unit, this was confusing for the user because he try to select the unit first and after to issue a command, so in this update i remove the four giant action buttons, now when you select a unit the game will show a red border below it so you can always see wich unit are selected and will show also a command menu on the right side to issue commands to the unit

As you can see in this image the ally units have a blue colored base and enemy units have a red colored base, another problem was to identify units wich already use all they actions to solve this problem int htis update when units use all their possible action (move and attack) they will grey out

This update will introduce unwalkable obastacles (like walls) and some terrainsrequire more move point to some units to go through, like mountains for infantry and farm fields for cavalry, this will open new possible tactics to use in the battles. 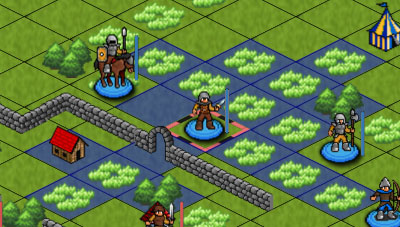 As you can see in this screen the unit can't walk through walls and other units, but ranged units can shoot arrow behind wall, with this new feature you can block the path with heavy meele units and fire with range units from a safe position.

The AI is now equipped with a new pathfinding system to choose the best route to engage the enemy and were also fixed bugs on the targeting system.

Were also introduced new options to choose when fighting the AI, like the map and the difficulty ( number of units to fight against)

Two new maps were introduced in this update, both of them with walls to try the new system

New features in the next updates

Now i'm going to list some new features i plan to add in the next updates: