The third alpha of Humans Must Prevail is coming, and with it a lot of polish and new units are included.

Posted by johnvillarzavatti on Oct 14th, 2013

Working on this game has been interesting because creativity can be satisfied fast. Unity and C# are great tools for game development and they provide a good set of tools to allow you code fast without much fuss. Granted, there are certain things that could be enhanced, but all in all it has proven that i was wrong all this years negating the usefulness of the tools.

This, coupled with the nights+weekends hours to develop the game, has resulted in an interesting roster of enemies that brings chaotic and fun gameplay to the game. Let me introduce them.

The non-human enemies are the bread of the game. The fill you but they don't necessarily are the main platter. 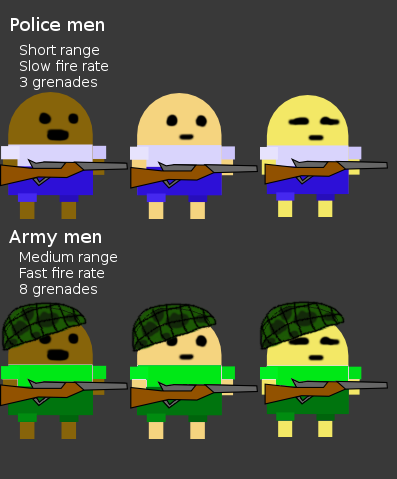 For now Humans Must Prevail knows only of three races, and there are two types of human enemies: Police men and Army Men.
The police men are usually slower and deal less damage to the monster with their primary weapon.
The secondary weapon (the grenade) deals massive damage but can be easily dodged because the hit sphere has been very limited. To close this entry here's the latest trailer for Humans Must Prevail, showing some of the third alpha features. Video Link. If you're reading this, know that i'm almost falling asleep here, so please, if you see any mistake in this post kindly point it out so i can get it corrected when i'm little more awake. ;-)