For some time now, we did not keep you updated of our advancement with Untold Universe. As a matter of fact, we are working on stuff we can not really show right now, but here are some news about the project.

During the last month, we worked a lot on making it to the first user tests of Untold Universe. Thus, we are implementing gameplay features such as ground fight and spaceship piloting, and are working a lot on the game servers. These features should be ready in a first version in around two weeks, but some other things were done and we would like to show them to you!

The most important choice we made lately was to switch from simple cubes to build our world to half-cubes, divided by two on the vertical axis. This being applied to every kind of cubes in the world, from dirt to metal. Why half cubes? Actually, for different reasons:

Here are some pictures of the result: 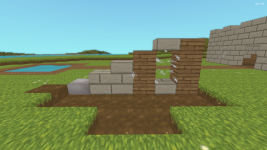 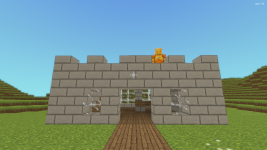 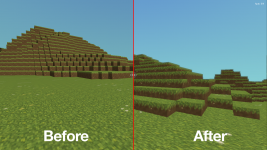 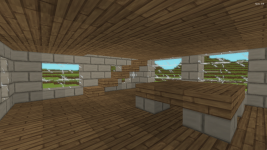 On these pictures, you can see two other new things, being the dummy model for players and some new ground building textures!

Of course the game still lets you drop plain cubes if you want. Also notice that the textures of some half cubes join when you put one on top of another. What do you think about this choice? Is it interesting or absolutely useless in your opinion?

Making the servers ready for deployment took us some time, mostly due to the work we did on security (around users account) and the implementation of the new gameplay features. Now they are almost ready, and we hope to come back to you soon with some actual in-game footages !

No, they aren't "slabs". These are HALF-CUBES!!! Pretty nice choice for all those problems with building :D

Slabs are too mainstream ;) Thank you!

Behold minecraft but only with half cubes