In March I concentrated on play-testing three puzzles. Two that had improvements I wanted to test, and one I hadn't widely tested at all. I also had fun integrating a new puzzle and a minigame.

I ran another playtest session at the end of March, and have been fixing the issues that came up, as well as integrating two new puzzles ready for the next round. The good news is that each time I revisit a puzzle the changes get smaller and more targeted. I'm also excited about testing out some of the later puzzles that haven't been played much because the stages leading up to them have been broken.

Notes from the Playtest

In March I concentrated on testing three puzzles. Two that had improvements I wanted to test, and one I hadn't widely tested at all.

In the last development blog I wrote about how I redesigned the original single-player activity to make it two player, but how there were a number of bugs and fitting the pieces together wasn't as obvious as I'd hoped. To fix this I made the pieces automatically clip together, even when they weren't in the correct place on the table. I also made changes to the way I signalled the map had been successfully put together, putting a light-bulb on the side to match the other puzzles. 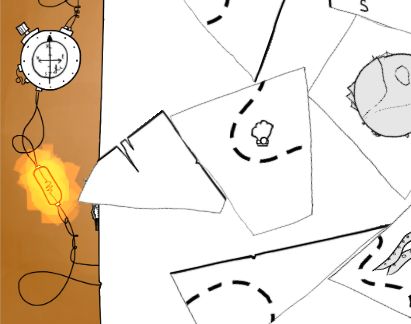 These changes helped greatly in the playtest, and there are only minor tweaks needed before I'll be able to call the puzzle complete. The minor tweaks include making the borders thicker to help differentiate the edge pieces from the centre pieces, and putting pieces of tape, staples, and other graphical elements on the paper to show when pieces have snapped together.

The idea behind this puzzle is straightforward, but it has been difficult to find a design that is two player and still intuitive. In this month's playtest I tried out the second iteration of the two-player version, and while it was an improvement (players could solve it), it was still a disaster (most people completed it by accident). 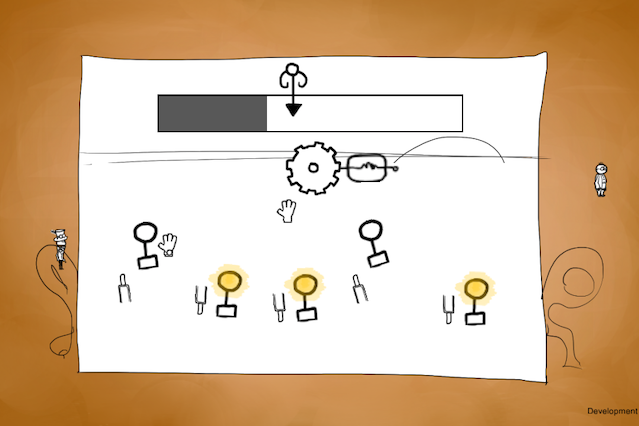 This month I took everything I'd learnt from the previous versions and modified the puzzle so that it should be harder to solve by accident, but easier to learn and more intuitive to see what's happening. I'll be paying close attention to this in the next round of testing.

I included this activity in a build two months ago, but it was broken so badly that nobody could play it. This time around it was playable, and some people even managed to finish it! The idea works well, but it still needs more polish to be fun and fit into the game. 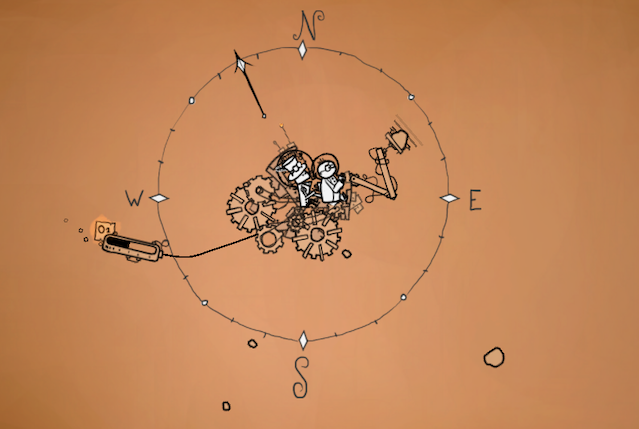 The main changes I made this month were making the vehicle easier to control, improving the navigation markers, and making the extendible arm longer and easier to use, so that the second player has more of a role.

This month I also worked on integrating a new puzzle and a minigame, so that they're ready to playtest. You might recognize the ink splatters from very early screenshots of the game. I re-designed the artwork, added animations, and wrote the relevant prompts and dialogue. 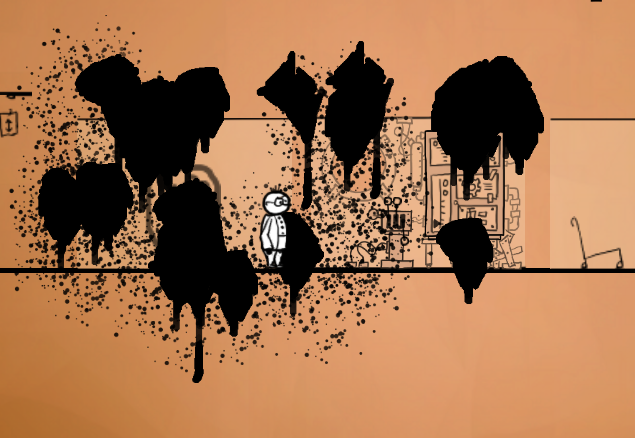 Part of this minigame also involves a net, which I had great fun animating.

And to finish up with, here's a screenshot of the 'controls' puzzle. Half of the fun is hopefully exploring and discovering how it all works.

Like last month, I'll continue working on feedback from the play sessions, as well as getting new puzzles ready for testing. With my progress over the last month, there are only two new puzzles to finish up the whole story arc! My goal is to finish one of them next month, and spend the rest of the time working on bugs and improvements.