That's right, we have decided to divide the game into two games. Don't worry, we're going to explain everything for you :) Let's go !

Welcome aboard the Omnia Express n°4, your monthly rendez-vous about the progress of Pankapu!

We hope you’re doing great! The game’s production is going very well. And today, we have a big announcement to make about the definitive format of the Pankapu games…

Don’t worry, we won’t have you wait any longer: let’s go aboard the Omnia Express!

Indeed, you’ve read that right, we’ve made the decision to divide the game into two games, or rather, two seasons

This will then allow us to start the console export (we know you’re waiting for them! ;)) right at the end of season 1.

Concretely, what will be the content of these 2 games?

Originally, Pankapu was supposed to be a four-episode game. Now, Pankapu is 2 games (or 2 stand-alones), with 2 episodes for each game.

By definition, “two standalones”, actually stand alone (Thanks, Sherlock!), that is to say that they can work individually. However, in our case, you’ll be able to transfer your data from the first game to the second game. And more importantly, story will have a continuity. 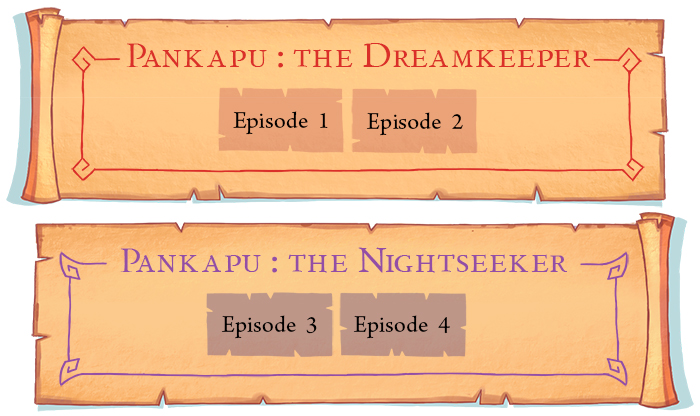 The core of the game then won’t be changed, the story will be more consequent and divided into two parts. The only thing that’s going to change is that each season will have its own ending, However, there will be a continuity between the two games.

Concretely, for the backers, this won’t change anything. The backers will then receive the 4 episodes (so, the two games) as it was planned

Why choosing to create two games instead of one?

Given the fact that we’ll have two games instead of one, this means that a console release could be brought forward. Indeed, the episodic format is hard to adapt on consoles for an indie game.

This separation is then very good news for the backers, for it will allow a quicker console release.

Those who want Pankapu on consoles will then be able to get the game earlier than planned. As for the titles, those will be full of meaning, and this separation will be very justified by the scenario (Shh, we can’t tell you any more about it for now :)).

That’s all for today, and feel free to ask if you have any question,

See you soon in the world of dream!

Today we want to present you the project of our friends from Aurora Studio:

Ilios: Betrayal of Gods is a game crossing over Beat’em all and Platformer, taking place in a world of Greek mythology stylized with Steampunk elements. A game that pays tribute to all our references : Bayonetta, Megaman, Castlevania and of course Saint Seiya!

Big fan of Capcom's Strider franchise... This game has a similar gameplay mechanic... which is awesome!!! Will be looking forward to more updates!

Wow, thanks for the compliment! Strider is not one of our inspirations, but it's such a great game that we're taking that as a compliment! :)

I'd assume this means you have to buy both episodes separately. I was thinking this would be pricable at 20 dollars or so, but I don't know what to think now.

You will have to buy both games separately indeed. And it will indeed by 20$ for two games/4 episodes (so 10$ for each game :))