In which tutorialisation is improved; the introduction to translation is reworked; the translation UI is polished; combat effects are touched-up or reworked; the prologue sees more traversal changes; and level-models can now be loaded from multiple files.

This week's screenshot shows a new means of accessing the game's tutorial-texts: 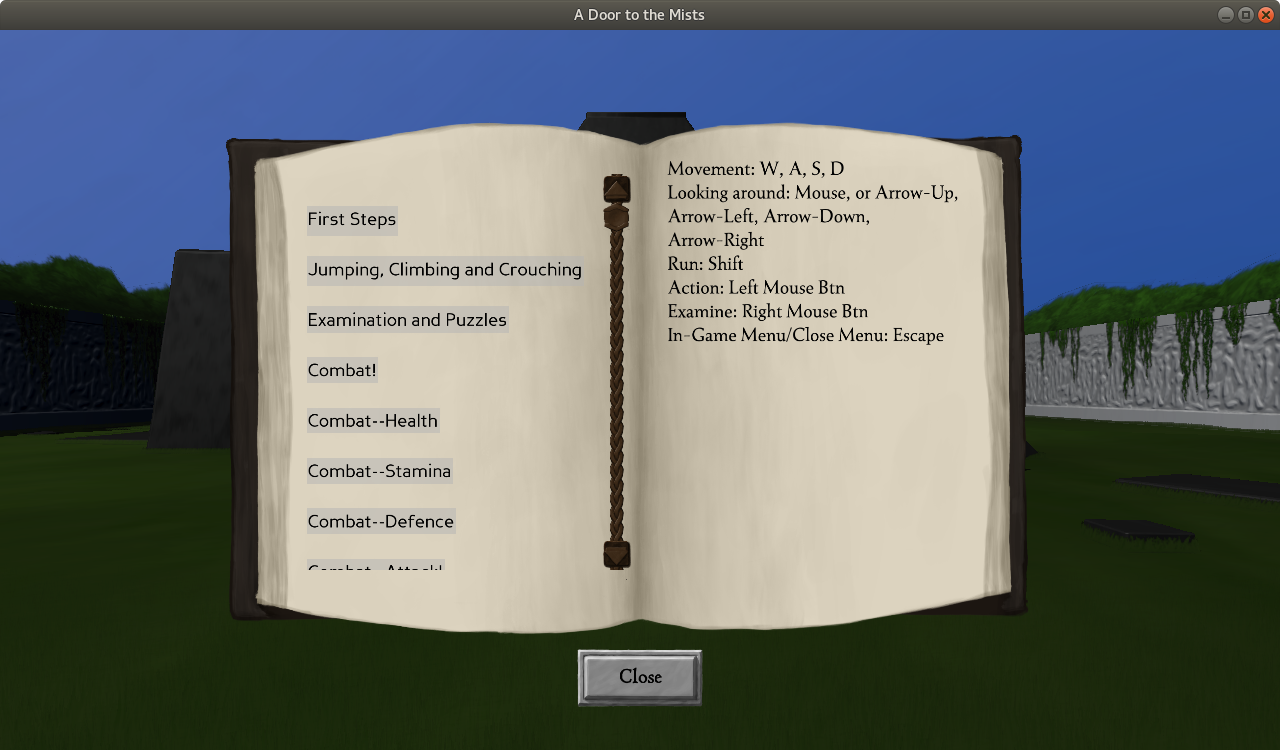 Quite a bit was done in the week just past! As a result, let me try to somewhat breeze through the various changes made, lest this post run overly long:

To start with, I've been working on the tutorialisation of A Door to the Mists. In particular, I discovered via demo-feedback that it was quite easy to accidentally skip or prevent various tutorials, resulting in the player missing whatever such tutorials were teaching.

Broadly speaking, I've been addressing this in two ways:

First, I've been adding some nuance to the conditions that dismiss tutorial-text. For example, the "jumping and climbing" tutorial was previously dismissed simply by leaving its trigger. Instead, it is now only fully dismissed when the player has reached a given height and climbed at least once.

In this, the combat tutorials are still a work-in-progress: it's possible for the player to interfere with some of them by repeatedly attacking, and I haven't yet settled on how to deal with that.

And second, I've added what's shown in the screenshot above: a "book" accessible from the in-game menu, and which holds all of the tutorial-text (barring some prompts and the "combat tutorial over" text).

Demo feedback showed that what I previously had was a little clunky: The first lexicon-book (which extends the player's word-root list) will likely be found before the first main-path translation puzzle (with only an easily-missed optional puzzle before). As a result, the purpose of the book can be a little opaque, and that first main-path puzzle, using then the extended lexicon, is perhaps a bit much for a first encounter with the mechanic.

So, after some deliberation, this is what I've done: I've reworked the starting set of word-roots to fit the first main-path translation. This new set doesn't work with the preceding optional puzzle, so I've removed that one. And finally, the lexicon-book has been moved to a location deeper in the level, well after the first main-path puzzle. Indeed, it appears late enough that players might encounter a translation that requires its word-roots before finding it, perhaps underscoring its purpose.

I've also touched-up the UI for translation a bit: First, I've caused the buttons that hold the current translation to be hidden when not in use, so that they don't appear to be targets for word-roots. And second, I've highlighted the words themselves to hopefully encourage seeing them as active parts of the puzzle. 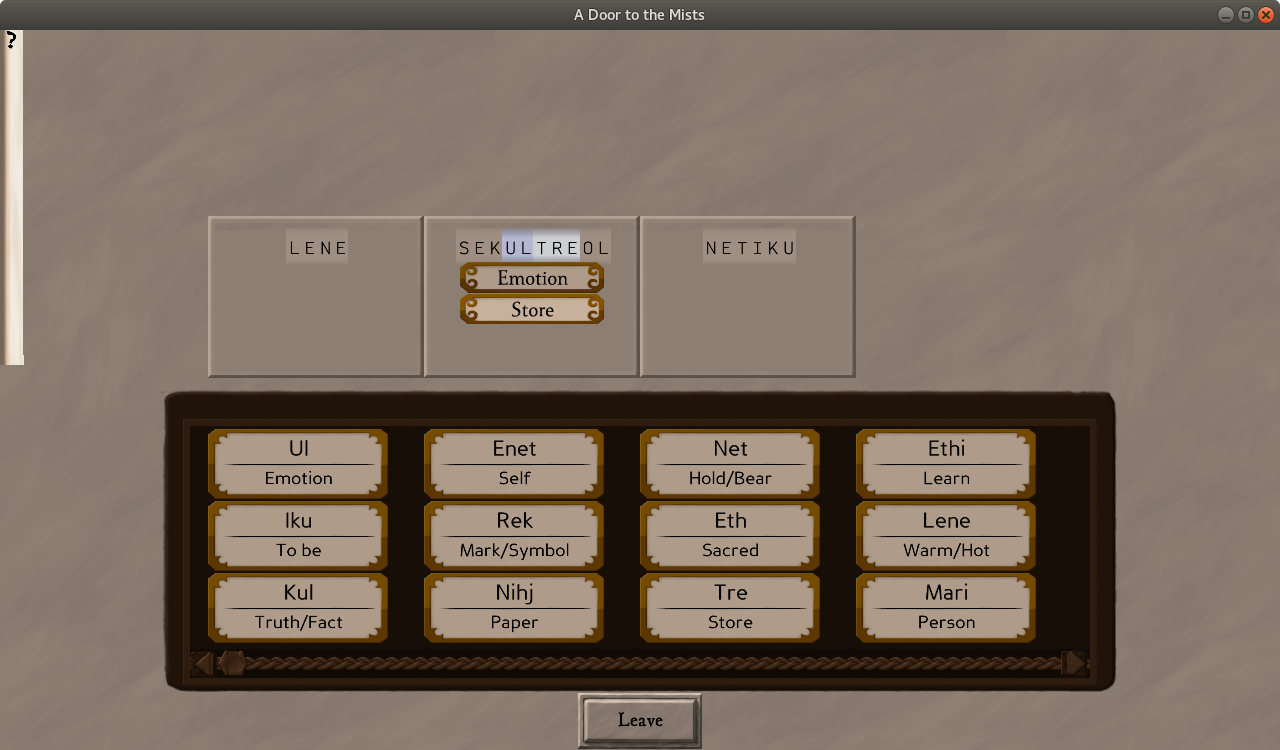 Another element on which I had feedback was the combat mechanic; it was felt that it called for a bit more "juice", and that some of the sounds weren't working for it.

I've thus reworked some of those sounds, and furthermore switched them from using 3D positional audio--which can dull sounds with distance--to 2D audio--which should play more-closely to their intended volume. As audio-positioning isn't terribly important in the combat mechanic, I feel, I don't think that a great deal is lost in the switch to 2D audio.

I've also increased the size, and in one case the number, of "blood"-particles produced by the current enemies when hit.

You may recall that I previously made some changes to the prologue-level's traversal. Well, in the week just past I made further such changes, polishing that traversal to (hopefully) be easier and more-intuitive. 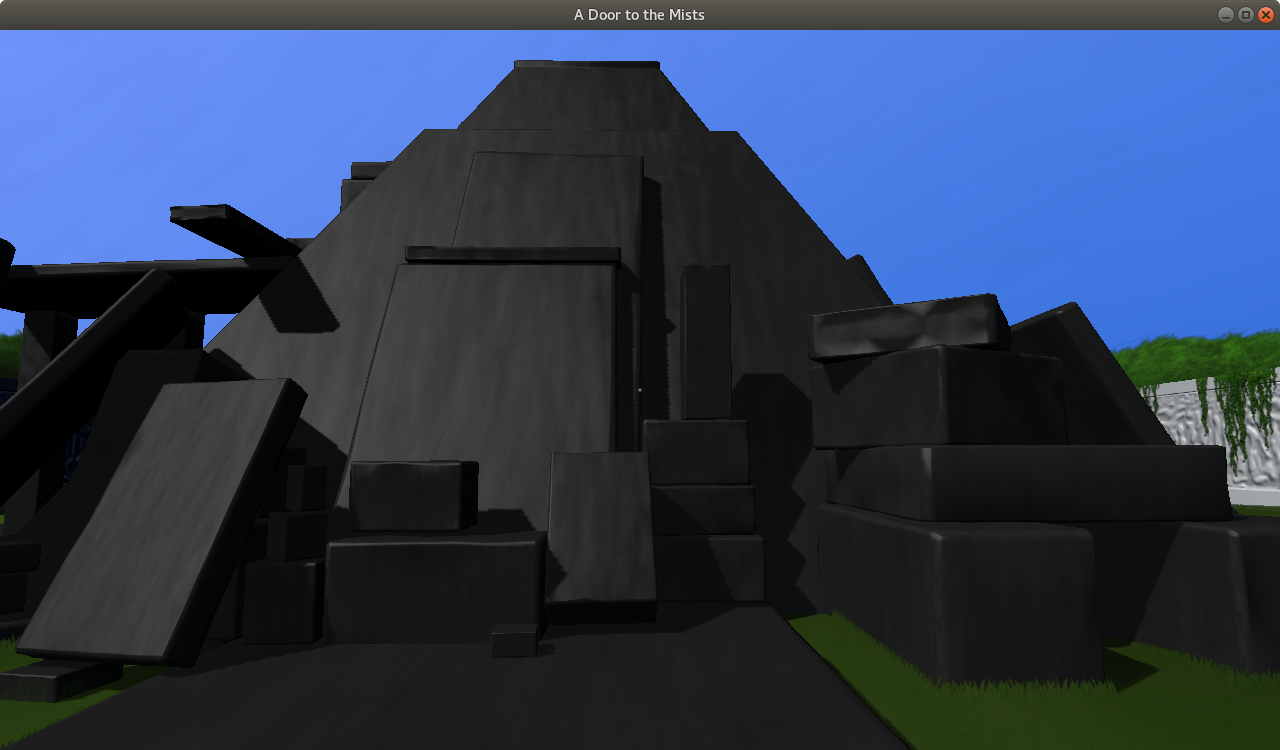 And in working on the prologue level, I was glad to discover that there are in fact now multiple routes up to the second part of the level's traversal-challenge. Not only might that render the traversal a little easier for new players by virtue of giving them more opportunities to find a way up, but it also fits nicely with the game's intended design. ^_^

On the technical side, I've added a feature that will likely be near-invisible to players, but that may hopefully be a great boon to me: the ability to load level-models in parts.

You see, the level-model files for A Door to the Mists can get... rather large. As a result, the process of exporting them from Blender and importing them into the game can... take a while. Hours, in fact, for the largest thus far.

Splitting the levels into parts, however, allows me to export-and-import only the relevant section or sections of a level, dramatically reducing the duration of the process. Furthermore, since the system doesn't have to deal with handling a single massive chunk of data all at once, even exporting-and-importing an entire level takes nowhere near as long! (And better yet, doesn't lock up the computer while in the process.)

I was a little nervous about the coding side of this--but I'm glad to say that it actually turned out to be much easier than I'd feared!

The Blender side proved tricker: Manually selecting level-elements for each export would be just asking for mistakes. Blender does provides layers with which to sort things--but only twenty, and the third level already uses all of those.

In the end, however, I discovered a neat add-on called "Super Grouper" that seems to solve the problem!

And indeed, I've already used this new feature to provide a simple escape from a previously-nigh-inescapable alley in the third level, and the process seems to work well. ^_^

Aside from all the above, a number of other changes were made that don't seem worth detailing: sounds for the player sliding down a slope; a bit of blue backlighting in combat; a new animation for a mummy-enemy; and various others beside.

One that might be worth briefly mentioning is that I've brightened the sunlight. Here's a comparison of old vs. new, with the older, dimmer lighting on the left: 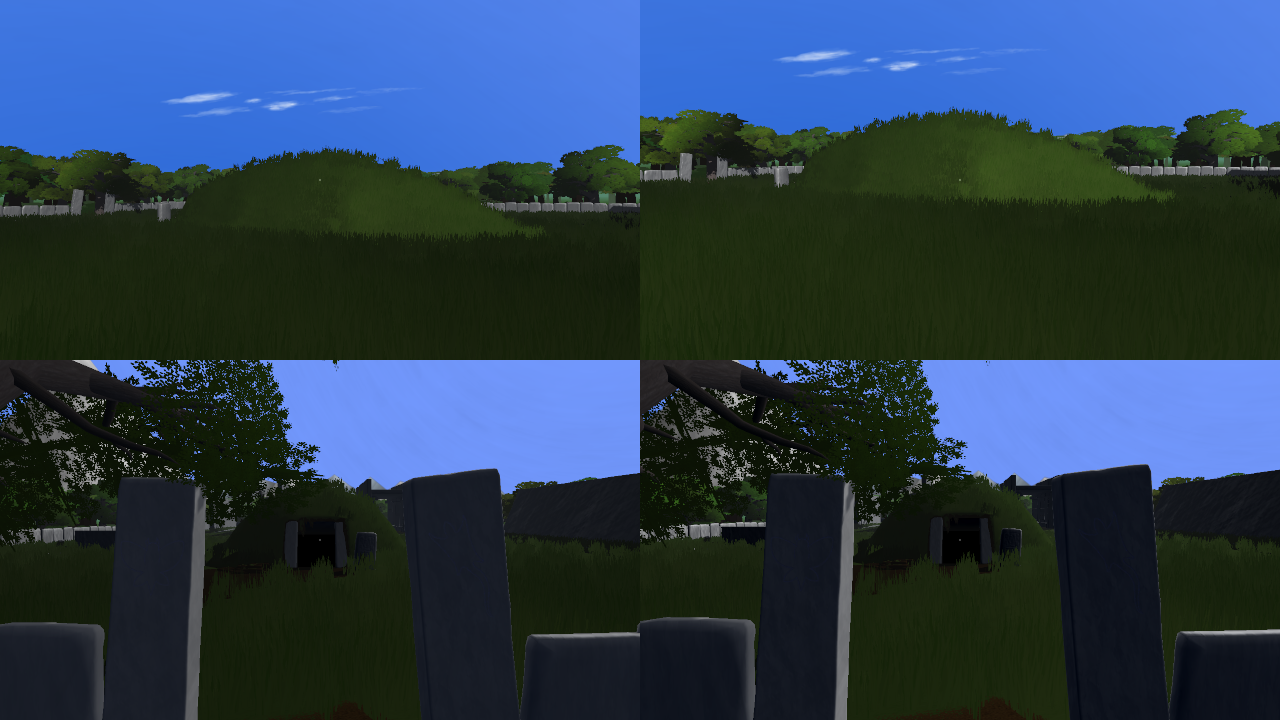