Turnover has been updated to v1.0.740. This is a major update that affects nearly all aspects of the game, introducing difficulty modes, new & improved mechanics, and more. 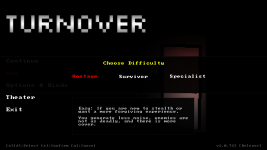 Survivor is NORMAL difficulty and is Turnover's intended level of challenge.

Hostage is EASY difficulty. In Hostage, numerous variables are relaxed to give the player a more forgiving experience. In addition, certain levels have a little more cover to help the player stay out of sight.

Specialist is HARD difficulty. Specialist is the same as Survivor, except there are no perks and the drawing of vision cones is disabled.

While Turnover is meant to be challenging, the introduction of Hostage mode will take some of the edge off of the hardcore nature of the game. If Survivor is a little too unforgiving for you, then Hostage should be right up your alley.

In conjunction with the new difficulty modes, the core game has been balanced. The aim here was not to make Turnover easier per se, but to rectify the more frustrating elements and to give the player more of a fighting chance. The balance comes in the form of more cover, improved mechanics & AI, and other assorted changes.

In regards to binds, the Dismiss bind has been removed and controls have been modified to make greater use of Interact and Use.

When controlling Clea, she will now slide on walls when navigating against them. The should remedy any collision problems related to sticking. Movement should now be much friendlier.

It is now possible to throw/use pickup objects without having to stop and aim. When you press Attack, Clea will throw her currently held object in the direction she is facing, with a stiff accuracy penalty. This should be helpful if you need to make a snap judgment when it comes to using pickups.

Don't forget, accuracy increases when aiming as the reticle tightens. So, it is usually still preferable to stop and aim.

When disabling a Security Server, instead of an animation playing with a timed disable, you will now be prompted to enter a server password sequence. The sequence mini-game is as simple as pressing the displayed binds in sequence. This serves to give more control to the player. It's worth noting that server interaction with worker-locked servers remains unchanged.

Many bugs have been fixed in regards to general AI. Enemies should now act in a more consistent manner, especially when it comes to spotting and searching. Also, most instances of snap-looking have been replaced with turn-to-look, so things are a more natural.

A new Sentinel patrol mechanic has been added: Suspicion. As usual, noises and spotted projectiles will alert guards, but now they will take a slower, more cautious approach to investigation. This helps balance out the different alert modes that enemies use. 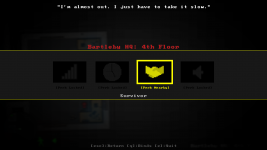 Turnover's pause screen has been redesigned, relaying more information to you. It will let you now if you are on a floor that has an unlockable perk.