Character Development of the main villains of Chameleon Swing: the crocodile and the eagle.

Carrying on from our last blog post, we have our main hero character, Camil Chameleon swinging from tree to tree in the Madagascan rainforest. Now we need to add an obstacle or create a conflict (like writing a story!) But what?

At first we did a search for Fossa's, remembering them from 'Madagascar' the animated movie but someone mentioned that crocodiles are indigenous to Madagascar. So we decided on a crocodile. A Nile Crocodile to be exact! Apparently they ride the ocean’s currents to cross the channel to Madagascar (just like those surfer turtles in Finding Nemo).

Early inspiration for the crocodile came from Egyptian mythology: 'Ammit' who had a crocodile head, a lion's body and a hippo's backside. From scruffy biro sketches I constructed the image of Ammit in 'Poker Night', a concept for my animation, 'Blood Money': Deep in the underworld Osiris and Anubis play poker with people's souls while Ammit sleeps. (Ammit sleeping with his Z's influenced the sleeping crocodile game over screen for Chameleon Swing). 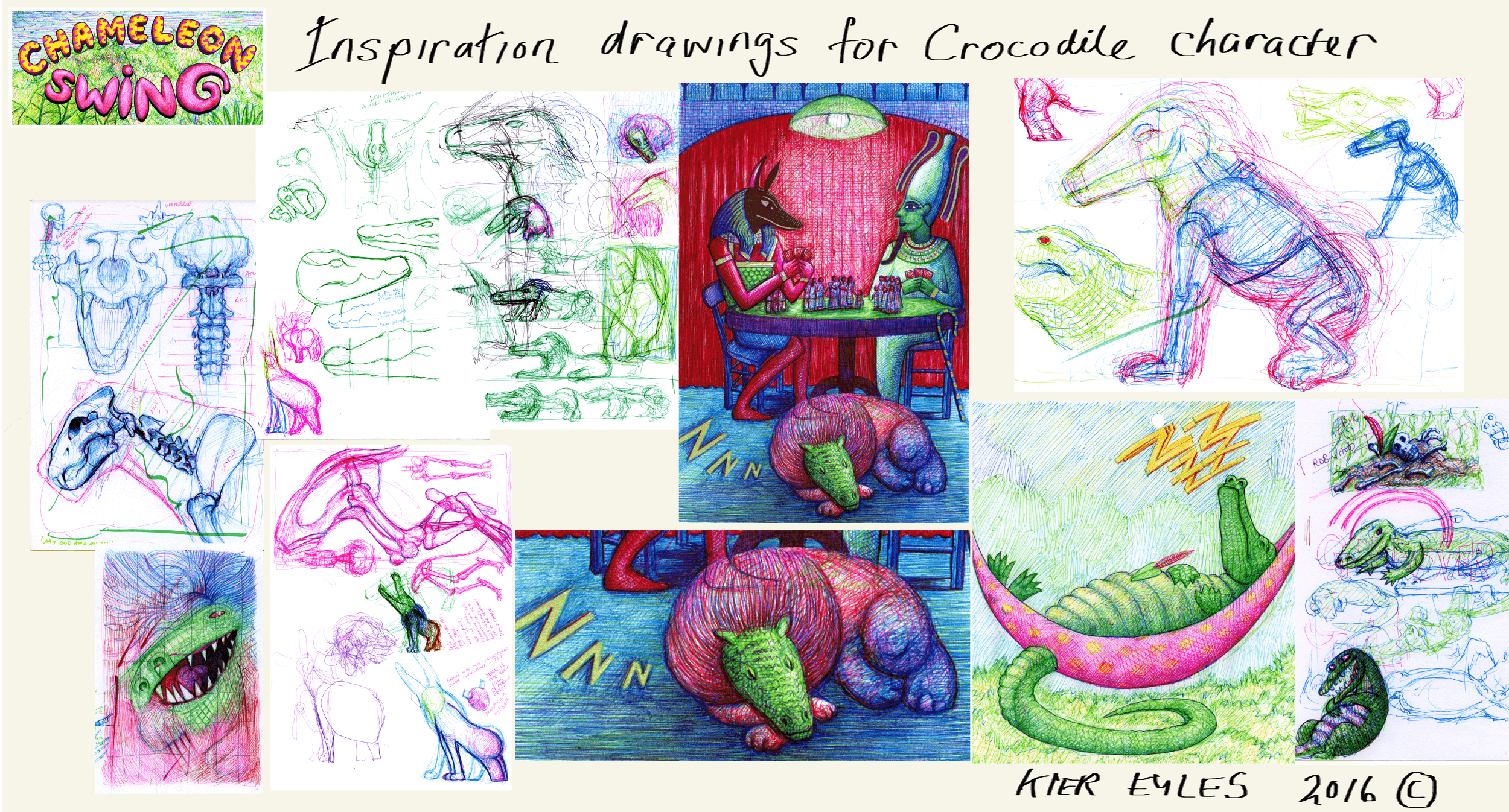 All these references were instrumental for the crocodile character.

Still I had to find a character that could appeal to children in a cute way: A big broad trap jaw smile, like mine, and a cheeky grin; changing those serpent slit eyes to more Bambi-like eyes, which are more appealing (Disney did all the testing, why reinvent the wheel?); and add green square scales for that extra sinister factor that I biro’d in a character before. The crocodile flat on the ground is still a dangerous beast, but subconsciously I wanted the crocodile to stand when he attacks the chameleon with a SNAP! Swallowing his food whole like a dinosaur-morphed-duck eating bread in a pond. 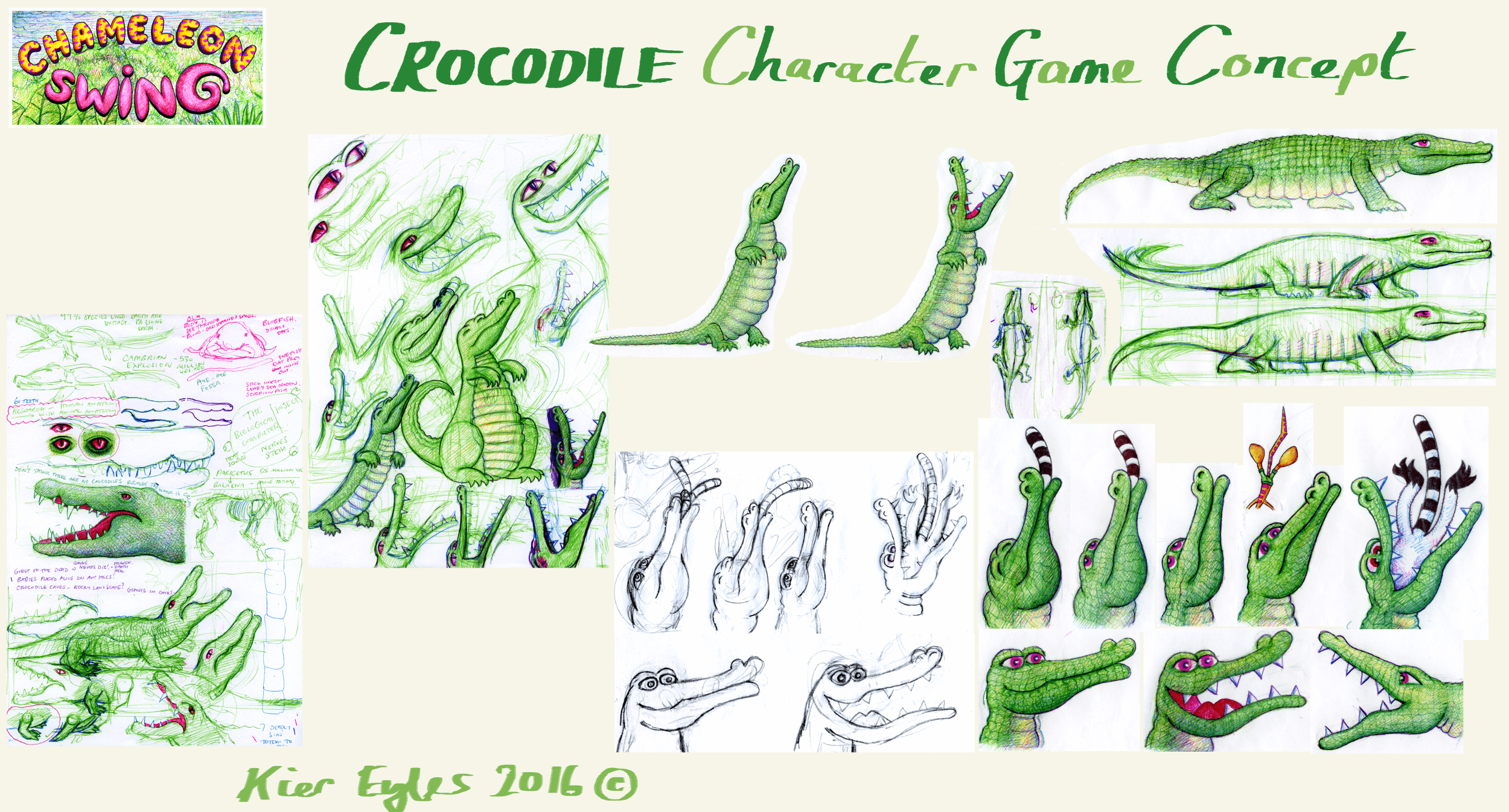 How would this character move or be animated in the game?

Just look at Youtube of course! I watched lots of walk cycles and motion studies – I didn’t know that some species of alligator can even gallop across the water!

Since we are developing a game, we want to it keep it simple – less drawings, less complexity, but it still needs to look great. The croc moves fast through the grass flat on his belly and then pounces up, hoping to snatch the chameleon from his flight. If successful he finishes with a gulp and a cheerful “ahhh”, grinning with glee. On the odd occasion the chameleon might be lucky enough to be above a lemur, so the croc instead eats the lemur whole, sucking his tail up like spaghetti. The sequence was fun to do and reminds me of Disney's romantic spaghetti scene in 'Lady and the Tramp'. 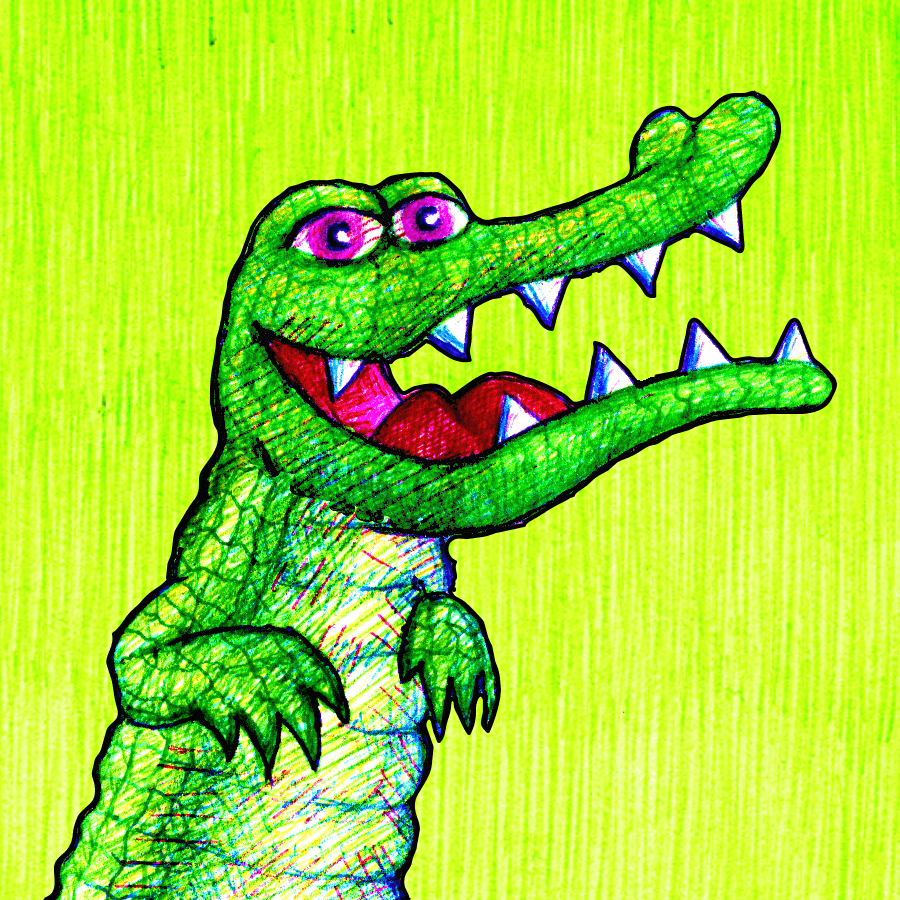 We have the antagonist and the greedy crocodile, but we needed another villain. We decided on an eagle as the secondary villain in the game to patrol the sky and add another level of difficulty.

Uncertain what the eagle would look like, I started putting biro to paper with very – should I say – crude results. I returned to my references of golden eagles and hawks in flight, the old faithful YouTube and Google gave me the main ingredients for the animation keys. I searched for eagles and Madagascar. And result! The Madagascan Fish Eagle – so why not use that? After referencing the Madagascan Fish Eagle I learnt that they have very distinct features, like the hooked beak, which I exaggerated to shape the eagles caricature. 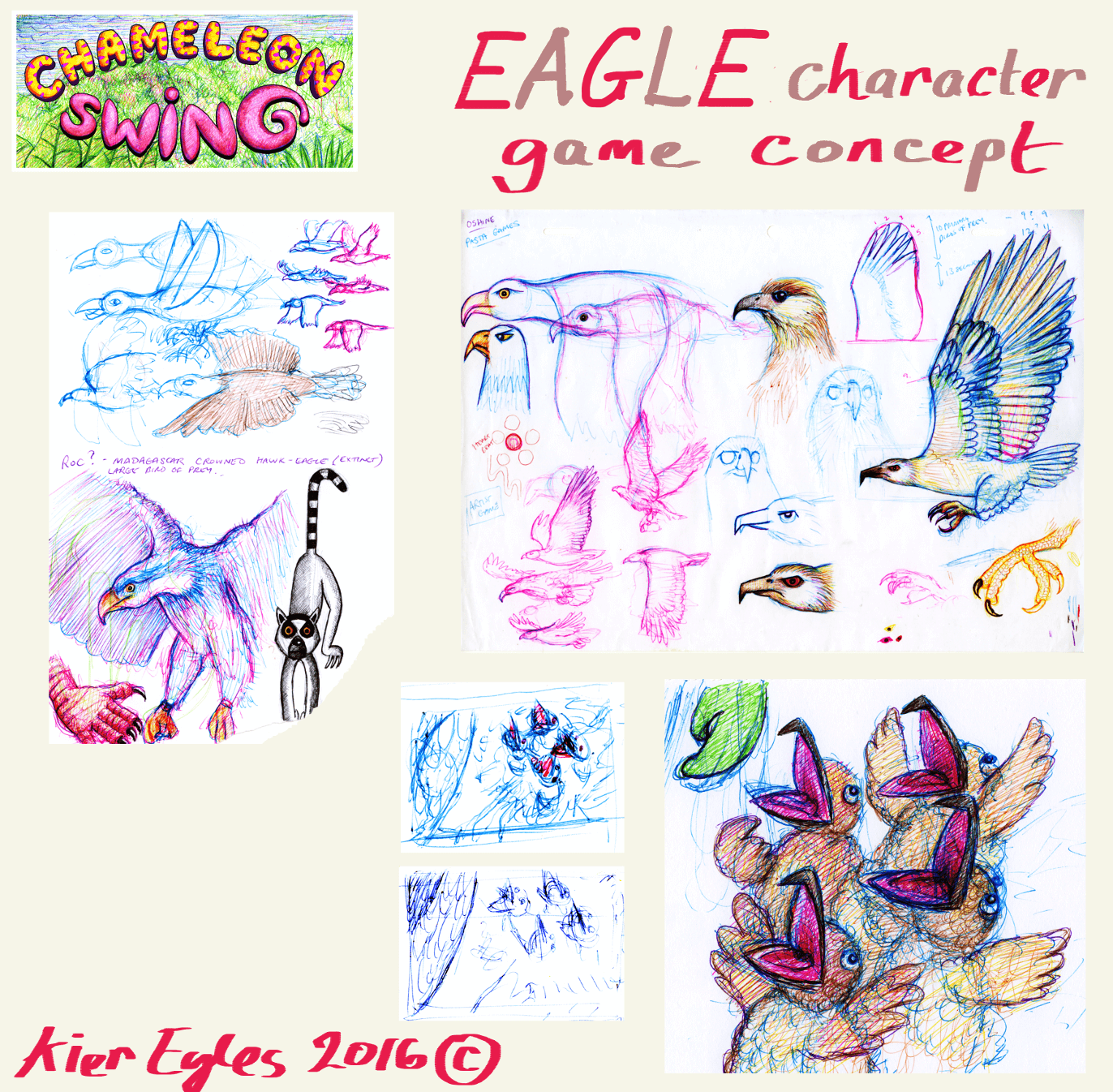 After penciling many sketches and ample biro colouring, the main poses were complete – we compiled a sprite sheet to be used in Gamemaker (Note: we also ramped up the colour levels and messed around with brightness and saturation in Gimp to make those biro scans really pop in the game.)

We had a vanilla bird flight cycle, but it had little engagement with the Chameleon. So new poses needed to be created of the eagle dive bombing to snatch away Camill.

After we received some interesting feedback from EGXRezzed, we needed the eagle to be visible for a while so the player could react in time to the dive bomb attack. We now have the Eagle flapping, hovering in the air and swooping down to attack – fingers crossed that's all the drawings finished.

Look out for more concept art posts from Kier in the near future!