It is the holiday season and I have quite the present for you: another free release of TripleA. It has been about 4 more months since the last release, and this one is has a long list of improvements to it as well. Lots of new features, but the one you'll notice right away is sound. That's right, we now have sound effects, lots of them!

I am proud to present another 4 months of effort into improving and expanding TripleA, by releasing to you the newest stable version 1.6.1.4

1. Support for new and totally different Map Skins.
This includes a skin I made for Global 1940 that looks just like ABattlemap!

2. A new Map Creator is being included with TripleA.
The map maker now has a full tutorial for how to make a Map Skin, along with improved instructions for each step of the way.

3. Added a new "Tab" to the right side of the screen, called Objectives Tab.
The objectives tab will display all National Objectives and other condition based things. You will have to update your maps to see the feature, and not all maps have the text file that displays this tab (though it is easy to make the text file for it, so bug the map maker if your favorite map doesn't have it).

4. New keyboard shortcuts:
Press "I" to show a popup containing info on whatever unit or territory your mouse is currently hovering over.
Press "N" during combat-move or non-combat-move phases to cycle to the next territory containing units that have movement left (you should never have to forget about that Russian submarine now!).
Press "WASD" or the Arrow Keys, to move around the map.

5. Added support for "UPnP" (universal plug and play) on Routers.
This means that if your router supports UPNP, triplea will automatically do port forwarding for you (online games).
Should make it a lot easier to host games live online.

6. Support for custom Sounds, and tons of new Sounds added!
Sounds can now be customized per map, so that you can have horses galloping for blitzing a territory in Napoleonic Empires, and tank movements for blitzing a territory in any ww2 game.
A ton more "sound locations" added, meaning more places for sounds to be played. And a lot more sounds added to the engine (like sounds for air battles, etc).


I'm pretty excited about this update, especially the new sounds.
Remember to support TripleA if you enjoy playing on it. Out donation page is here:
Sourceforge.net 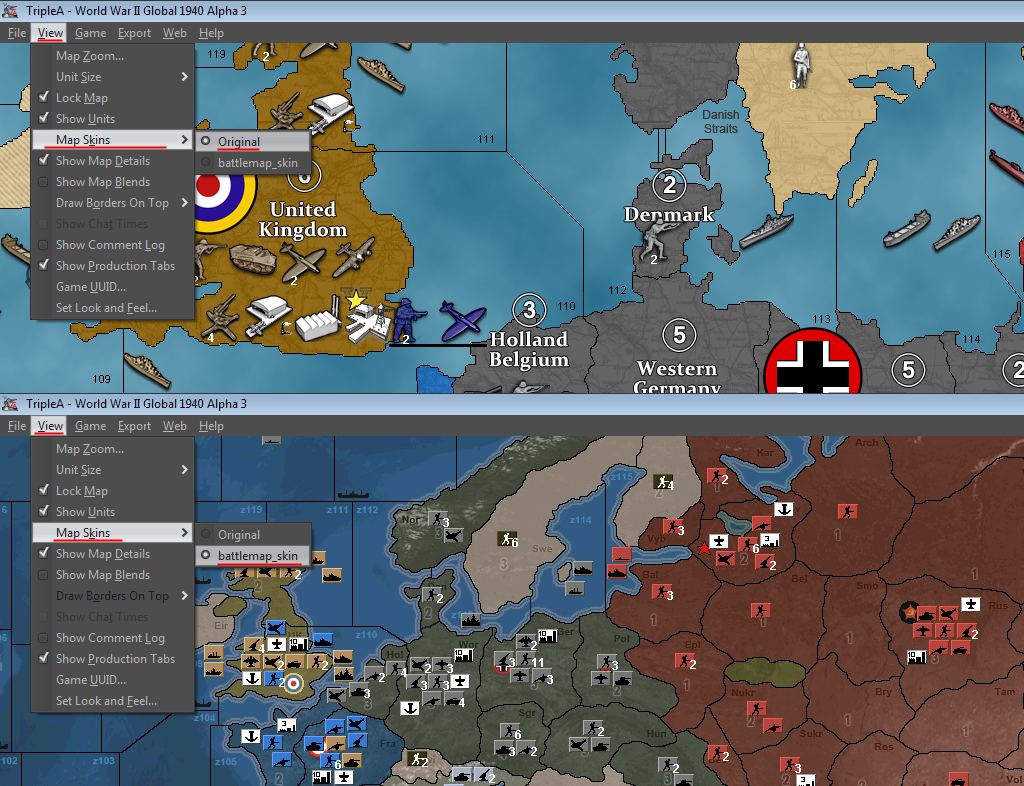 It will only show you which skins you have downloaded, so you must download skins for this to work. They are downloaded the same way as new maps are. (See this link for a video of how to download a map: Indiedb.com )


The second picture attached below shows off 3 things:
1. The new Map Skin for ABattleMap style Axis and Allies Global 1940 2nd Edition online on TripleA.
2. The new Objectives tab (visible on the right side) showing you which objectives are currently met, etc.
3. The new "Info" popup. My mouse was over the Infantry in Somaliland, so the popup is showing info about infantry, and about Somaliland. 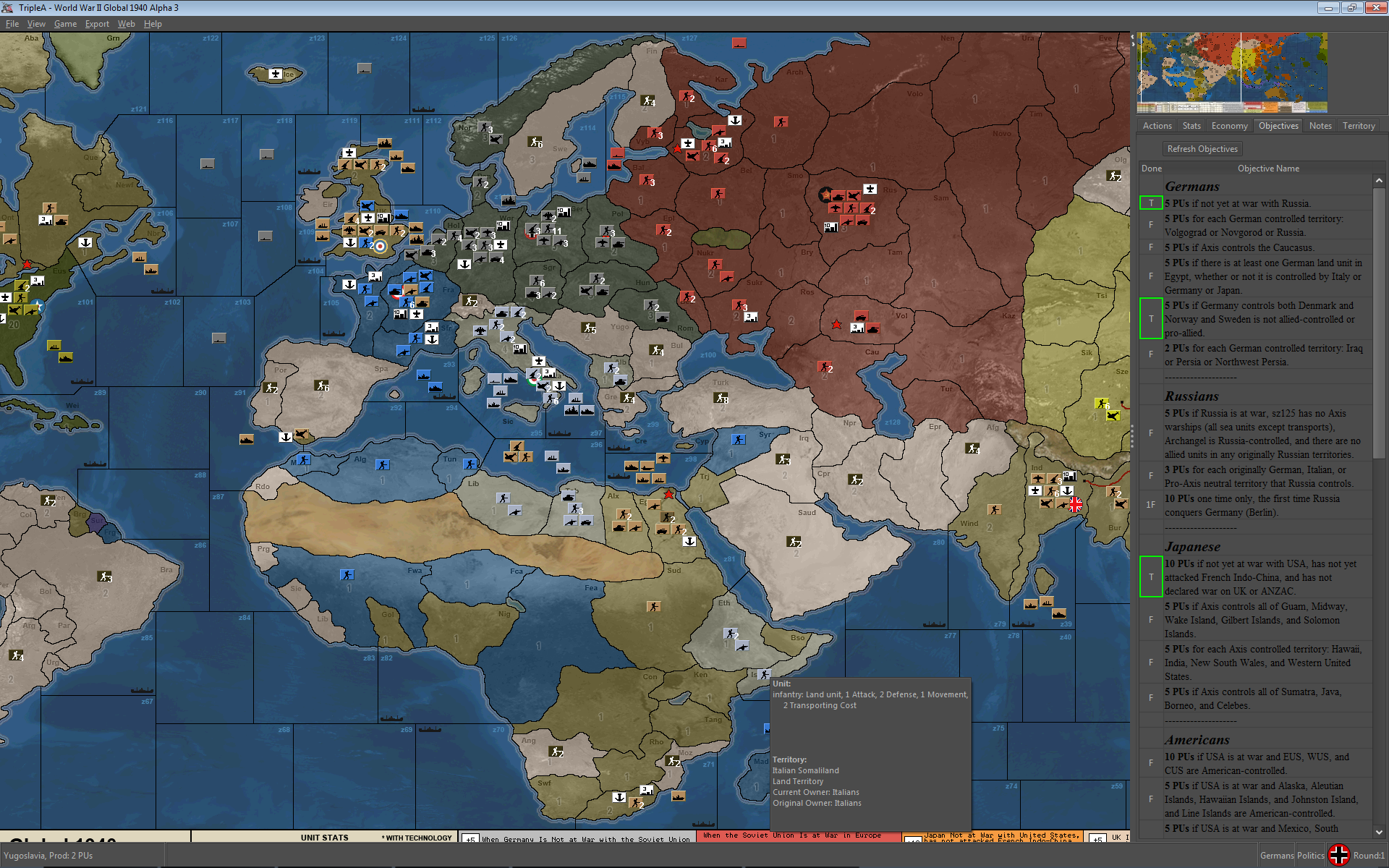 Mabye the makers of this game should buy a world atlas... or download google earth

Why, exactly? The map looks decent enough for the purpose. Even if the scale's a bit skewed.

Well that was needlessly obtuse.

I agree, the map doesn't give any point of geopolitical correctness in any era.

Yeah, whatever excuse they give for this - it's SLOPPY!

Hope you aren't shooting the messenger here. The "Battlemap Skin" you see pictured above is a direct and exact copy of the ABattleMap map for the same game (and yes, it is that skewed/distorted). Our users requested that we make this skin, since many of them are ABattlemap players who miss the look of it. The ABattlemap's map is itself inspired by the board for the boardgame of Global 1940, which is also very skewed and distorted. So if anyone is to blame, it would be the people who drew those maps.
As described above, this battlemap skin is a "second skin" that can be optionally enabled by downloading it. The "first skin" (the default one) is much prettier in my eyes, and not so distorted (although europe was made larger to accommodate all the action that takes place there), although I would say it is still a little skewed. You can view the first skin here: Media.indiedb.com

If that still bugs you, then take a look at the map for Anniversary Edition, which is by far my favorite map of the world. The map was hand drawn by one of our members and it is very close to what you expect the world to look like. You can see the that map here: Media.indiedb.com

The map is a copy of the one used for ABattleMap's Axis & Allies Global 1940. It is an alternative skin, not the main one. I agree it is a bit/very skewed, but even the board game's map itself is fairly skewed.

heh would hate to see Australia on this map lol

Nice.
First Dominion 3 debiut, now TripleA update. It looks like it is good time for turned based strategies.