A look at the design and decision process for our Travel Gameplay.

After returning from gamescom, for which we polished the combat gameplay, we decided to turn our attention to the travel gameplay.

With the convention behind us I finally had some breathing room to take a good look at that topic. And since our goals have changed quite a bit from the original prototype (all for the better), that unfortunately meant that we’ve moved into unexplored territory. So it was time to iterate. And iterate I did, to exhaustion. 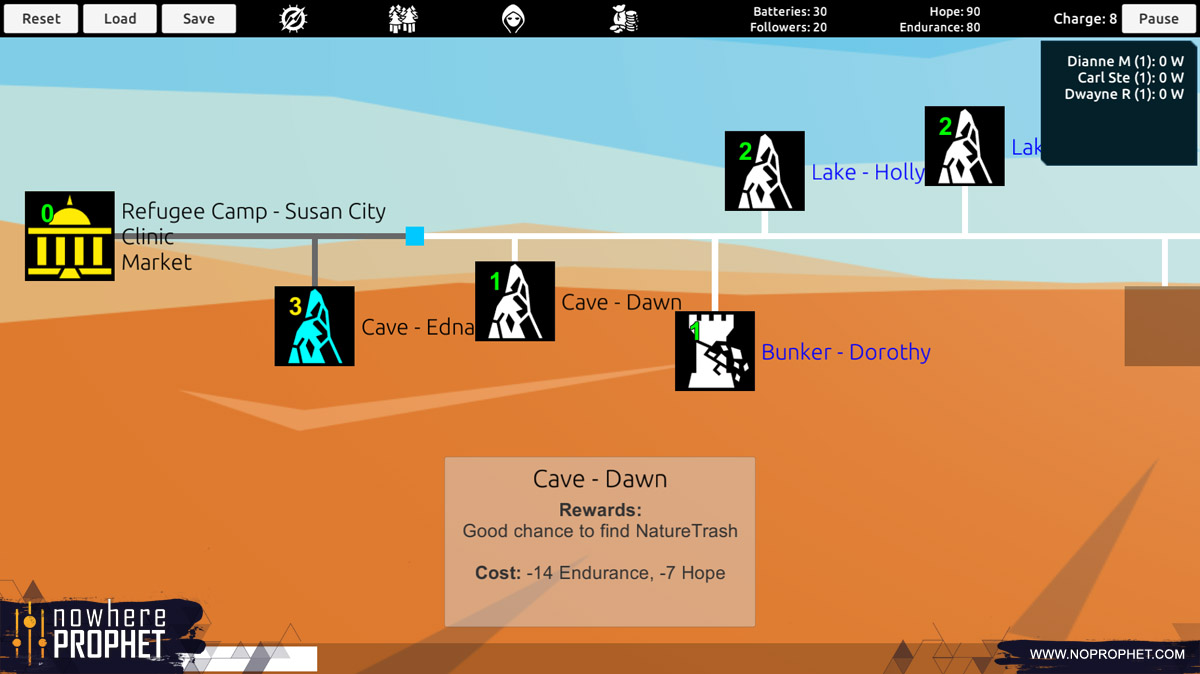 My first idea was something very abstract and simplified, to not distract too much from the combat gameplay, which is the core of Nowhere Prophet. Unfortunately the kind of decisions it brought about were not interesting enough, and the presentation and flow did not make you feel like you were travelling through a world. 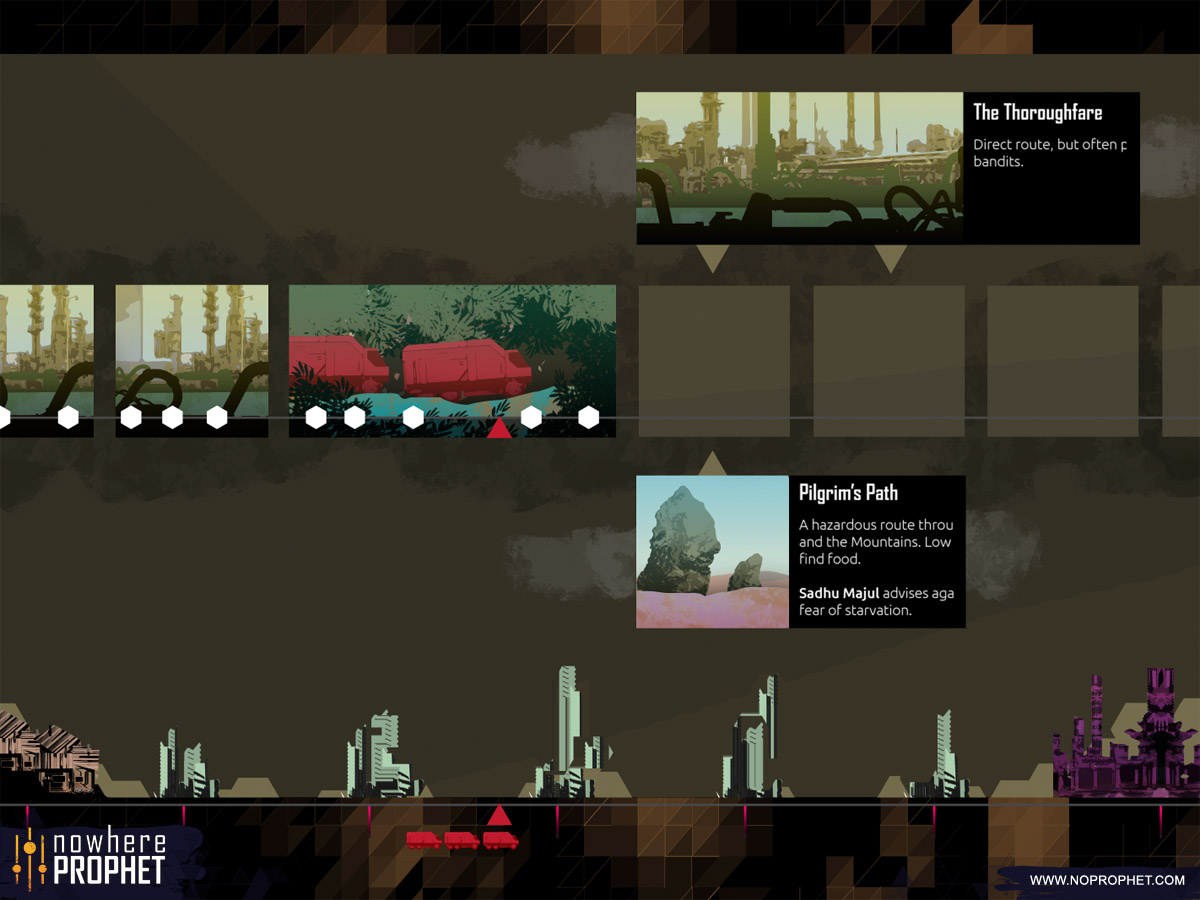 After playing around with that for a while we decided to take a step back and try something different again. This time something card-based, where the different cards represents the trails that are available to you on your trek. This felt a lot more like travelling and the decisions and interaction was nice, but we still weren’t completely happy with it.

One of the main issues of our travel systems iterations up to that point were that they felt too abstract. To the player, neither the world, nor the convoy felt real. There was no sense of travel. So how can you create that feeling?

So for our next iteration we spent some time looking at the issue and here’s our thoughts and results: 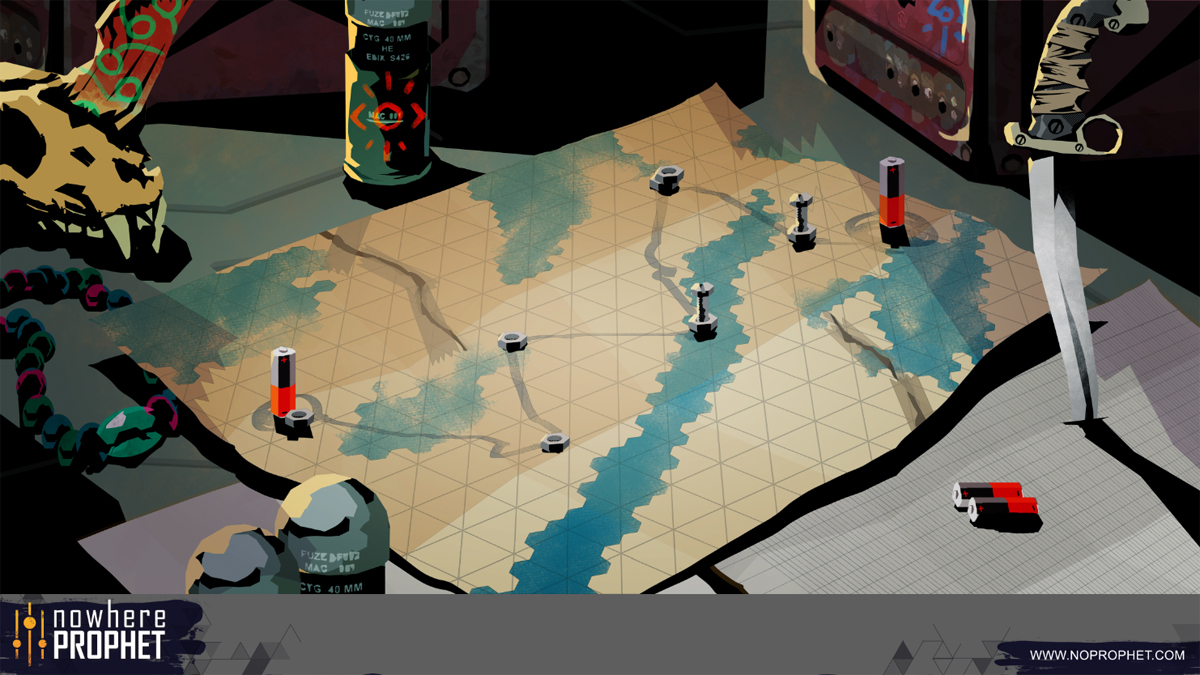 One very obvious way is to add a map, this allows you to show your position in context to the world. By simply moving a dot along a line across the map, you understand that you’re travelling. On the other hand this makes decisions on the road a lot more abstract. Since you're at a very high scale, decisions also need to happen on that level, and not every 2 pixels of movement on the map.

Also building the right map for our game is not that easy: Since the locations and events of your journey are randomly generated, we couldn’t show a detailed map with lots of terrain features without breaking our budget. And on the other hand it would be weird to see a mountain on the map while you’re walking through a forest. So finding the right level of abstraction was key for us.

Another issue was the actual style of the map. Since we’re trying to build a very unique storyworld (sci-fi meets post-apocalypse meets non-western culture), the map needed to reflect that. The first instinct was to use a sort of simple sci-fi map display. This makes it easy to get away without showing terrain details, but that did not communicate the world well. So instead we decided on this large-scale map of the area with littered gadgets to detail the world. 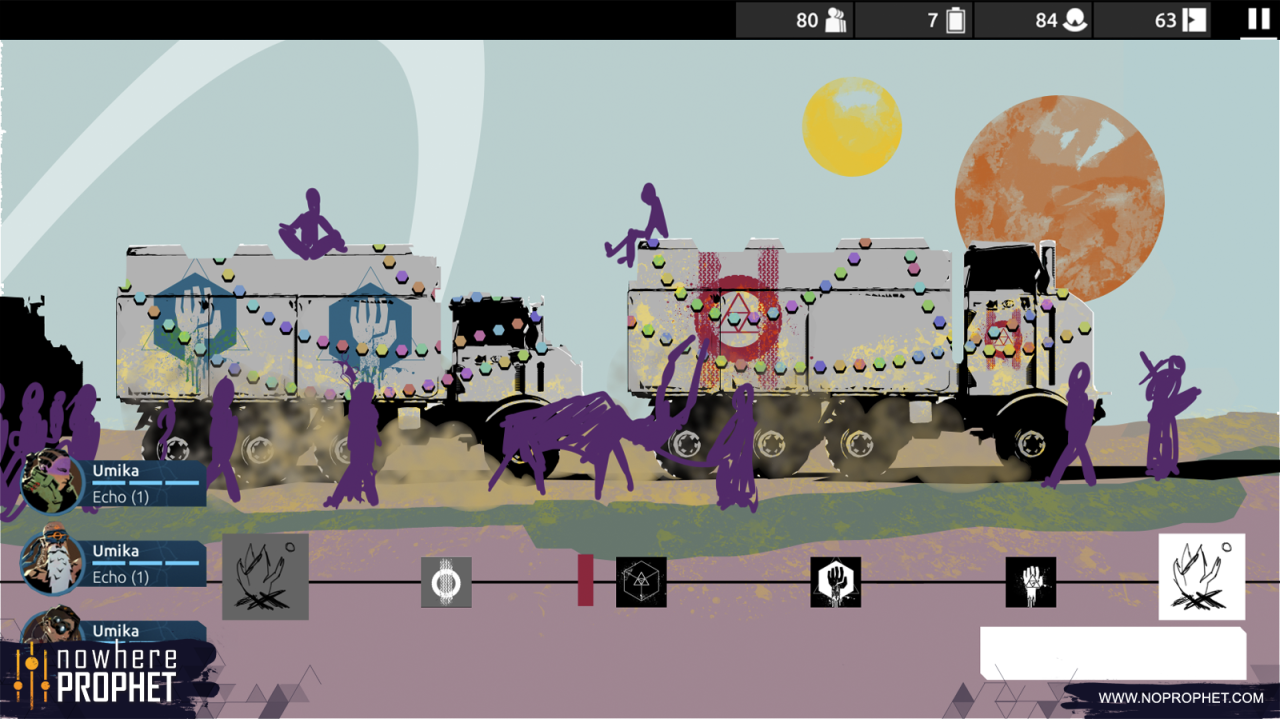 Another method to make it feel like you’re actually travelling is to make the journey take up a chunk of time. This can be easily done by showing a connecting line between point A and point B and then slowly filling that up. So, basically this.

However while that worked on the map we had, it didn’t solve our issue of making the convoy more present. To that end we took a little page out of Banner Saga’s notebook and decided a sort of side-view for the travelling convoy is a good way to go. Above you can see an early sketch of that view. We’re still trying to find the right view and scale.

On one hand it should represent your convoy’s current state and your current surroundings, on the other hand it may not be too expensive to create. The smaller the scale the easier it is to get away with simplification, but the less personal it becomes. 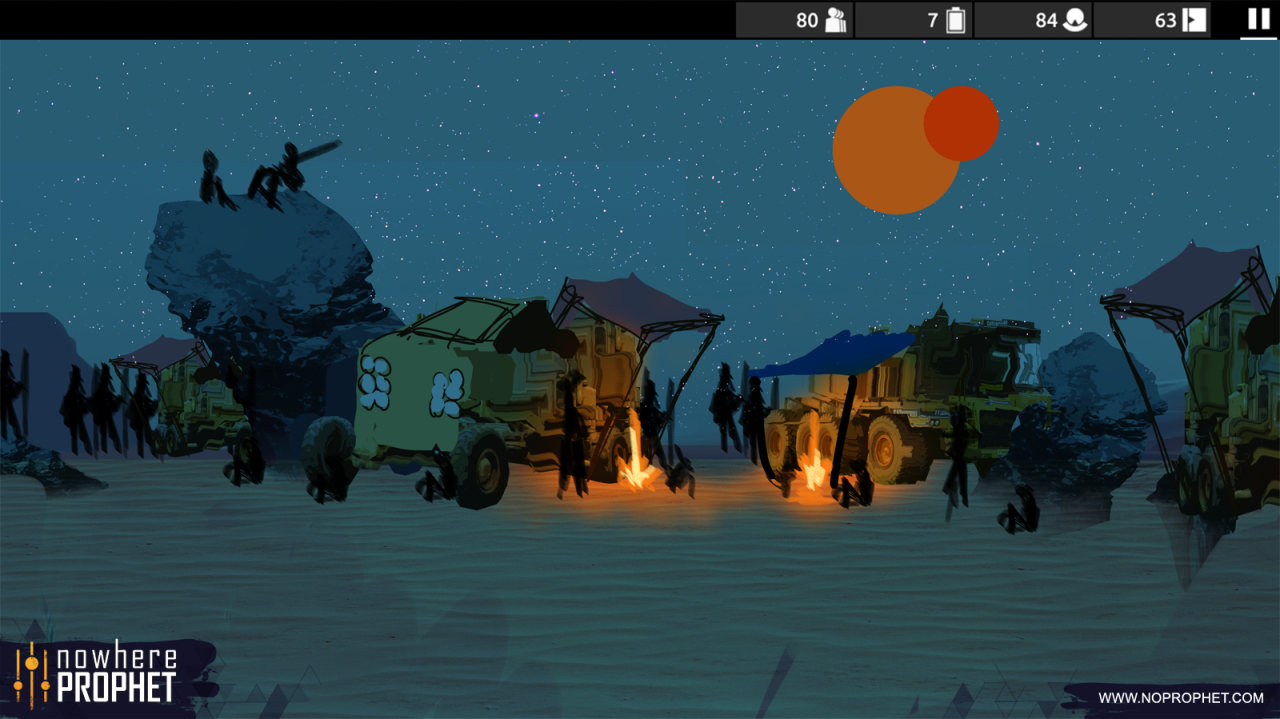 And the last change we are looking at is to provide a view into the convoy, when you’re not travelling. We simply added this very early camp sketch to the flow of screens and limited the player’s team management to the moments when they were camping. And suddenly we found out that we had created a very smooth travel rhythm.

So here’s our thoughts, after many iterations and discarded screen concepts. What do you think, how can you make video game travel real?