In which a trailer is made; said trailer has a mist-like transition for text; said transition uses Perlin noise generated by Panda; level two sees some minor fixes; and the side-project continues, and may have a video soon.

This week's screenshot shows a still from a new trailer: 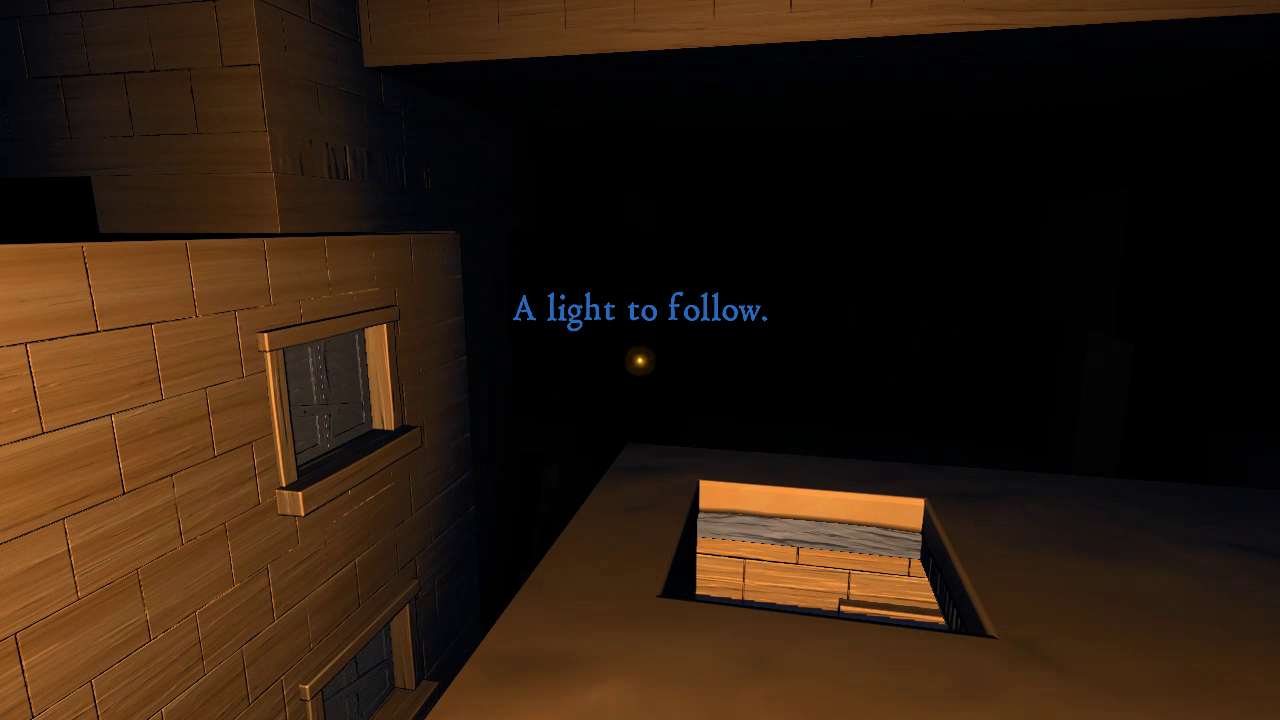 The week just past was one primarily of trailer-making, touch-ups, polish, and a bit of bug-fixing:

To start with, I have a new trailer made for A Door to the Mists! It's a short "mood trailer", not depicting gameplay but rather establishing a feeling and motivation. Specifically, it shows a flight through level two, heading for the distant light of that level, accompanied by royalty-free music from Kevin MacLeod's "Incompetech" website.

The trailer is complete, I believe, but has yet to be released--for that I intend to wait until closer to the demo's release!

As part of the trailer, lines of text appear and are replaced in sequence. And I didn't want that text to simply fade out--I wanted it to evanesce raggedly like mist. It seemed to me that I could achieve such an effect via 3D Perlin noise--but how to go about generating that?

Blender and GIMP could generate 2D Perlin noise, but I found no easy way of making 3D noise. (And furthermore, I had some difficulty in using Blender's Perlin noise--at least in part, I daresay, to my unfamiliarity with its shader-node system.)

The possibility remained to generate 3D noise myself in code; I've done so before, as I recall. It wasn't a terribly appealing option, but it was an option.

Then, on the off-chance, I searched the Panda3D forums--and it turns out that Panda has Perlin noise classes! Including a 3D version! Okay, it doesn't seem to handle multiple octaves by itself, and it has some unexplained parameters, but those were nothing insurmountable.

Rendering out the noise thus generated took a little time, but I feel that it was worth it--I'm quite happy with the transition that it enabled. ^_^

Moving away from the trailer, level two saw some minor fixes in the week just past: I discovered some curbs that lacked rear geometry, and had a wall with a misaligned texture. Thankfully, both of these proved very quick and easy to fix!

And otherwise, I made a variety of small touch-ups, polishings, and bug-fixes that don't seem worth detailing here: editing to some of the writing; adjusting the colour of some text; implementing a GUI fix given by a Panda3D dev; and so on.

As to the "wandering visual-novel" side-project, it recently acquired nearly-fully-functional doors, and can now load much of the editor's work into the main game. Indeed, I'm hoping to soon upload a short video of the process as it stands, so look for that being posted on YouTube and Twitter soon!