Its a shock to make your first IOS build in 4 months and see it run at 60-80fps without any tweaking.. But what to do,go for a silky smooth experience, or ramp it down to 30 fps and save the players.battery time.

So today was a shocking day, after developing for several months on my new nexus 7(2013) and being used to averaging 60-100fps, I decided to spend a few hours doing the annoying task of making a new IOS build.

As the only device I had handy was an old Ipad 2, I was shocked to see framerates around 60fps , peaking at 80 fps, not much below the android quadcore. Now the build I was testing was the latest build which is only missing final combat audio, the new special abilities and the cutscene/dialogue system. 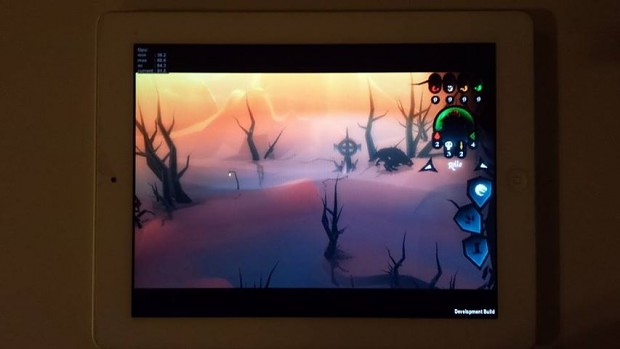 So its safe to assume perfomance will drop a bit, but not a lot. But it brings a dillema, what to do with 60fps. We're talking a RTS here, so 60fps is excessive, although it feels soooo smooth.

The main choices are.
1. keep it at 60 fps, and present 60fps gaming on a mobile device, but it will drain as much battery power as any other hi-performance mobile game, which is usually very annoying. (it 'll run through my nexus's power in less than 2 hours)
2. cap it at 30fps, and have a nice stable framerate, but it won't tax your battery as much. (no idea on the actual gains, but it will be less than 50%, probably 25-30 % less drain, perhaps someone with more hardware knowledge can chip in here)
3. add some stuff, more objects, more units on screen , anti-aliasing etc etc.

Now the top two can be made user controlled, (in a settings menu), but the bottom one, will definetly tax your device more, and once level design/campaign design starts there's no going back on the unit-cap.

So what's your general feel, worth improving visuals and gameplay, or cap it and save some battery time?

Here's a new video of the latest gameplay. (running in the sandbox level, as per usual)

Don't mind the fps here, its recorded from pc, and it just detonates the fps

So currently I've found a great voice actor do most of the voice acting and narration. That means hopefully the game will be fully voiced soon. Also the general music and audio is coming along nicely.

The final game-play coding to be implemented are , the special abilities. These come down to the following abilities a unit might gain in combat and that can be deployed as part of the player's strategy.

The last part of development before beta will be the dialogue system, which will feature animated portraits and narration by Oberon himself. And like mentioned voice recording is underway. Once that's done I'll start working on the first campaign and placeholder cut scenes. So the end is insight, and a Christmas release is probably in the stars..

I think it's best to leave the choise to the user, he should decide about whether to cap or not. As for the third point: Maybe using an option, that controlls whether to use AA and a level of detail slider. Eg.: When set to low then the game doesn't display things like bushes or at least just a few of them, and when the lod is set higher it starts displaying more details. Haven't done that in unity yet but maybe layers are usefull.

That's a good idea, but that means the unit cap will remain where it is. (12 units for the player, and 12 for the AI).

But a settings menu would be a good idea. I wonder If you can turn AA of and on from code.. I'm guessing you'd need to restart the app..

The choice btw battery life and impression of the game? Choose the impression.
I've watched your video with alpha build - the graphics is so Soft & Smooth (TM) =) It's a ridiculous crime to cut the framerate to 30 fps. No way - 60 only.