Another week, another show! We're back from Lisboa Games Week Videogames, boardgames, cosplay, e-sports, conferences and even robot construction. 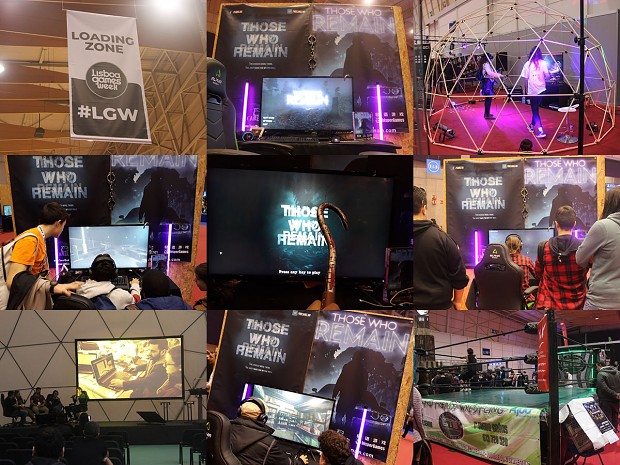 The last quarter of the year is always very active in term of tech / gamedev events in Portugal.
This was especially true this year, with MOCHE XL Games World taking place on 14th to 17th November and Lisboa Games Week on 21th to 23th November.
Anyone who’s exhibited before knows how this kind of show can be exhausting. Exhibiting in two shows right next to the other is really exhausting.
But we have a saying here in Portugal: “Quem corre por gosto não se cansa” meaning something like “Who runs by passion doesn’t get tired”.
So of course that we couldn’t miss the chance to go to Lisboa Games Week too.

Good thing we didn’t!
We were on the “Loading Zone” area, where all the game devs were stationed. Some studios were only exhibiting, while some others were also running for the “Gamenest Awards” with their games.
We were only exhibiting and showing Those Who Remain (possibly) for the last time in an event in Portugal before release.
A lot of folks were coming in to check out the progress of the game and asking about the release date.
We can’t say how happy we are with the crowd’s excitement around the game.

The “Gamenest Awards” winners were given the chance to participate in a major event in Europe, where they’ll have the chance to pitch their projects to potential investors or publishers.

Those Who Remain Adventure
Related Engines