New version of Those Magnificent Men available for download. This version adds race selection and more tech. You can chose between Human, Vampire, Werewolf, Merman or Shaddow Person, each offering different bonuses and penalties. There are also more guns, engines and tech available in the hangar.

You can now play the game as one of 5 races:

Each race offers differing bonuses and penalties as shown in the screenie below: 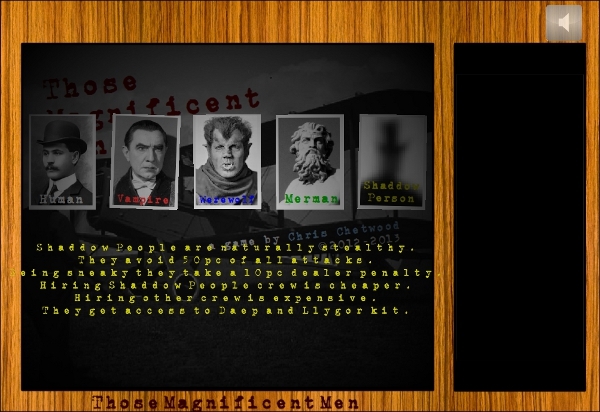 Guns guns guns!
All the gun media has been improved and 5 new guns have been added, with more on the wa

y!
The pic below shows the variation in gun-style, some of which are locked to the race you play the game as.

Other improvements include a new smoke system that looks a bit better as shown in the game-over screen below. 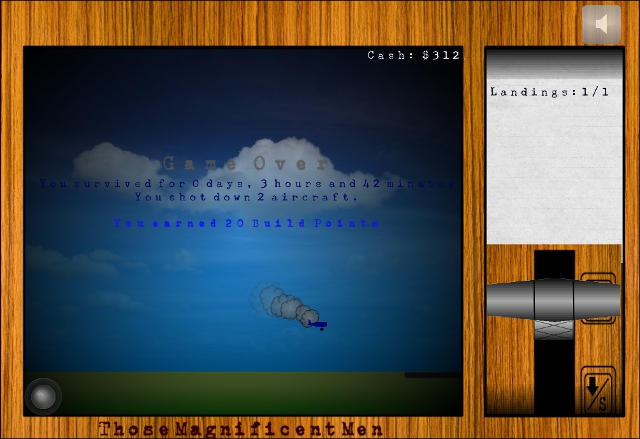 The full change log for r007
# ALL SHINY & NEW
- You can now chose the race you wish to play as:
* Humans
- They are generally hatred by everyone. Hiring non-human crew is more expensive and they have no access to special upgrades. They have no bonuses, but they have no penalties either.
* Vampires
- They love the night and hate the day. They get a 5% speed bonus from 1900 to 0700, but suffer a 5% speed penalty from 0700 to 1900. Hiring vampire crew is cheaper, but hiring werewolf crew is more expensive. Vampires get access to Batham and Schorlus unique equipment.
* Werewolves
- They are nocturnal, getting a 50% damage reduction bonus between 1900 and 0700, but they suffer a 50% damage penalty from 0700 to 1900. Hiring werewolf crew is cheaper, but hiring vampire crew is more expensive. Werewolves get access to Lycan and Munch unique equipment.
* Mermen
- They are not natural flyers and suffer a permanent 5% speed penalty. They do, however, get a 25% cargo bonus. Hiring mermen crew is cheaper, but there is no penalty for hiring crew of other races. Shaddow People also get access to Aquane and Nepthine unique equipment.
* Shaddow People
- They are naturally stealthy. They avoid half as likely to be attacked, but being sneaky means they are distructed and they take a 10% dealer penalty. Hiring Shaddow People crew is cheaper, but hiring other crew is expensive. Shaddow People also get access to Daep and Llygor unique equipment.
- Landings is the most difficult part of flying so now you can practice via the practice landings button.- Added two-touch dragging (same as right-click dragging) to enable maximum stock/part selection when using the touch-screen.
- Upgrade stats now pop-up when hovering over them.
- Random jobs will appear with a star - if these jobs are completed a random special upgrade will be unlocked and made available in the hangar.