This week introducing some exceptional players and top players tracked during our ….

In this weeks Community News we announce the "exceptional" player so far in Campaign #165. Click the Read on link below to see who it is. We then present to you a soldiers short story on the defense of "any town" WWII Online. And Finally, 18th Anniversary Awards are being sent out! Read the full article below...

This weeks player award for exceptional activity so far in Campaign #165 goes to: GRETNINE

This player scores as Top Killer so far in this campaign with a whopping 668 kills. Over 200 kills more than the next competitor. Gretnine accomplished 668 kills in 242 sorties giving him a 4.54 kill/death ratio. Add to that, Gretnine holds the top two slots for Top Kills in a Sortie. On June 27th he achieved 54 kills on a single mission with a Somua and later the same the day he wiped out 44 more in a Matilda. Those two sorties hold the number one and two slots! Congrats to Gretnine for outstanding play. As you can see he is his own force to be reckoned with!

A Soldiers Story for the battle of "any town" in WWII Online!

Coms were spotty as the 2 Allied tanks rolled up on the objective—in this case a position along an enemy likely avenue of approach. The veteran tankers were hyper-aware of how much danger they were in. The garrison supplies were getting to a critical point, thus they had moved to the objective in A13s. Being seen would start the clock on being killed. Luckily a couple of friendly Infantry also made the trip. Hopefully they would be effective in calling out targets, and keeping sappers away from the 2 tanks. ‘232 moving west!’ was the first call. 2 shots rang out, (one from each A13), and the 232 exploded. No need to reposition the tanks signaled each other, as there was little chance the 232 had seen us before expiring. ‘PzIII moving west!’ That call came from one of the Infantry. ‘No vis!’ the 2nd tank alerted the 1st. 1 shot rang out, and the PzIII stopped. Now smoking, the 2nd A13 was now able to get a visual, and 2 more shots rang out, resulting in one less PzIII. Still no need to reposition, as again, the enemy tank had died before being able to return fire.
One of the friendly Infantry, a sniper, fired once, dropping an enemy Infantry. Based on the timing, the 2nd A13 decided to move to a secondary firing position. The other A13 decided not to move, as he was far enough out that it was still pretty unlikely that he’d been seen and/or marked.
‘Opel!’ The Opel was dispatched with an HE round from the 1st A13. ‘HT audio!’ was followed quickly with ‘He is towing a pak!’ The first A13 said he’d handle the HT, leaving the Pak for the 2nd A13. Both targets destroyed in short order. Still no need existed to reposition either tank. ‘Infantry coming this way!’ Now the friendly Infantry became very important to the success of the mission. Maybe the Opel had managed to set an FMS before being dispatched. Both enemy Infantry were cut down by the friendly sniper, and a veteran with an SMG. The first A13 reported that ‘the odds are good I’ve been marked/seen now, but my position is good enough where I’m just not going to move’.
Back in the town that was under attack, the last depot was recapped, liberating the town. ‘No ET EWS’ meant that our efforts along the likely avenue of approach were having a positive effect. ‘PzIII south of the west road!’ The first A13 reported having no visual. The second A13 swung his turret to the right, and there the PzIII was, some 500M away, flanking south of the 2nd A13’s position. A shot rang out, and a 2lb AP round hit the enemy tank, tracking it. The 2nd shot put the PzIII’s main gun out of action, and the 3rd blew the turret off.
‘No EWS!’ was quickly followed up with the announcement that the enemy had recalled the attack on the town. ‘We were down to rifles, lol!’ someone in town reported, as the A13s, sniper, and SMG returned to town. A successful mission. - CinC Augetout.

This year, we decided to track player sorties during our Anniversary events (June 6th through June 9th) and issue awards for the top and runner up players. Great battles were had, and many RAT lives were sacrificed (grrr!). An internal CRS bounty has been laid on kdped02's head

To claim your award, contact CHIMM via WWII Online Forums, or email CHIMM@corneredrats.comwith your home address,not a P.O. Box address. I reply to all communications with further instructions and/or package tracking numbersas they are sent out. 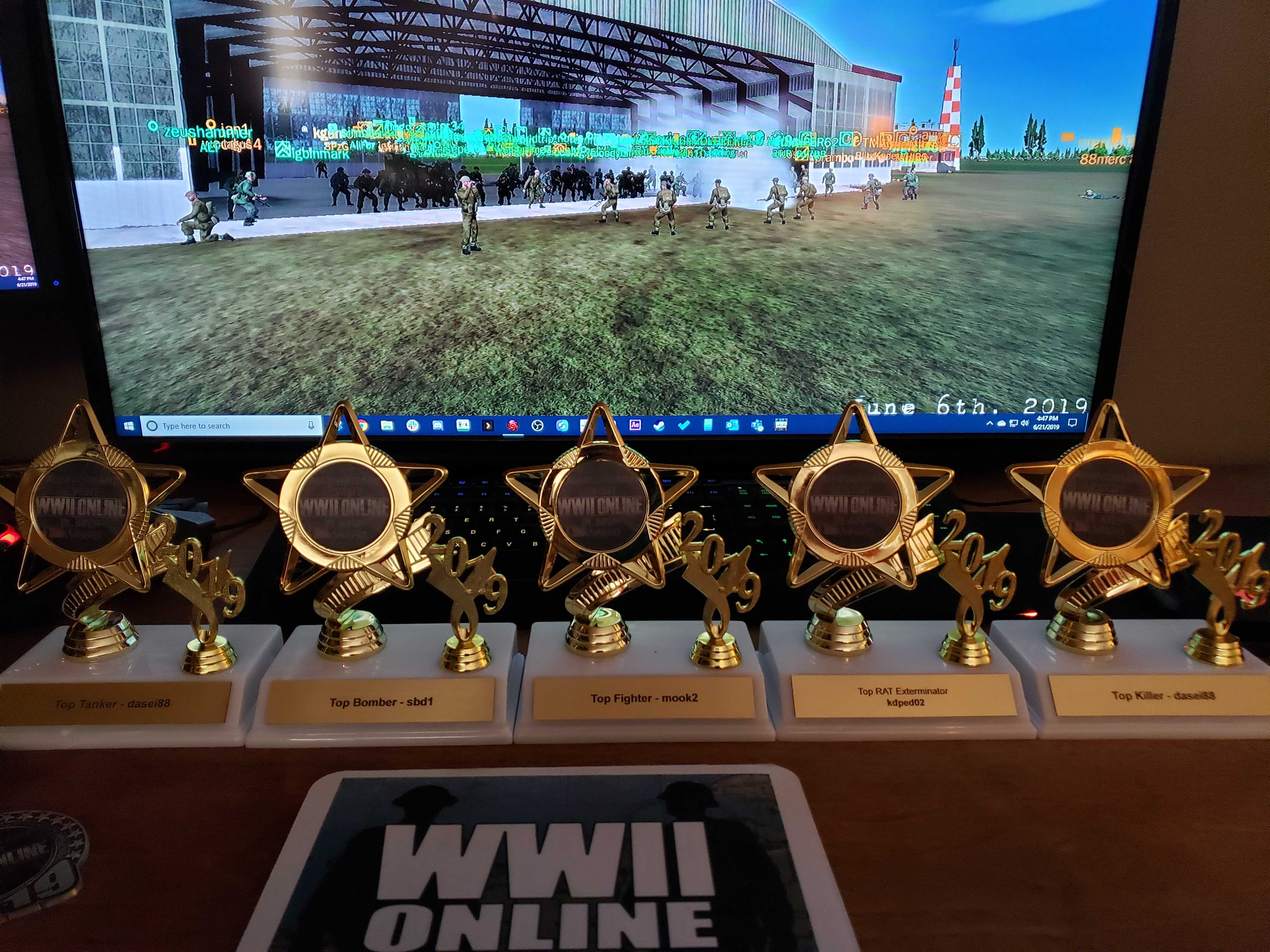 Runner Up Medals to be distributed: 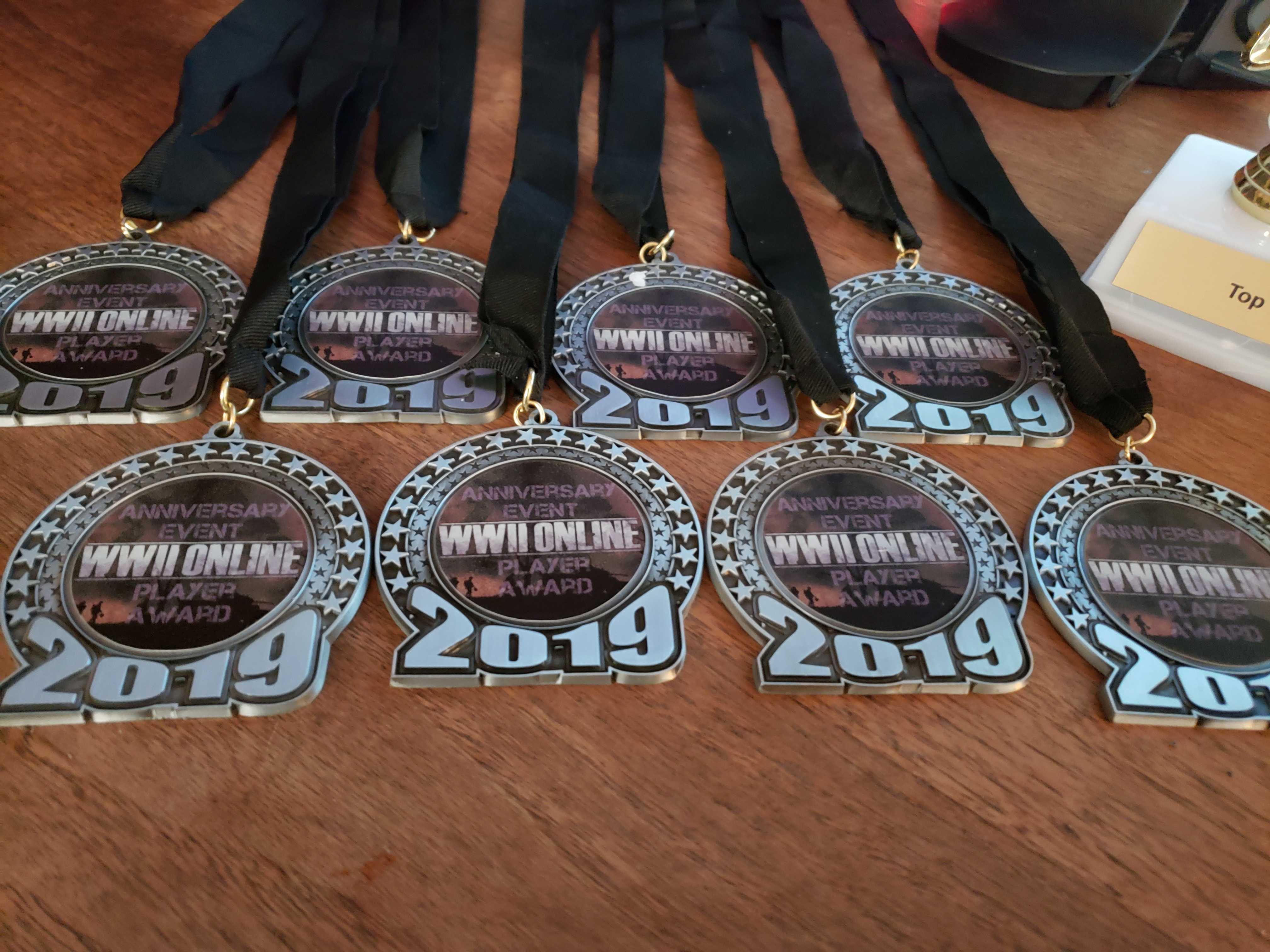 Onlyhalf of the players have responded so far. As of this article I am still waiting forinformation from the following players: