Posted by NumantianGames on Apr 2nd, 2019 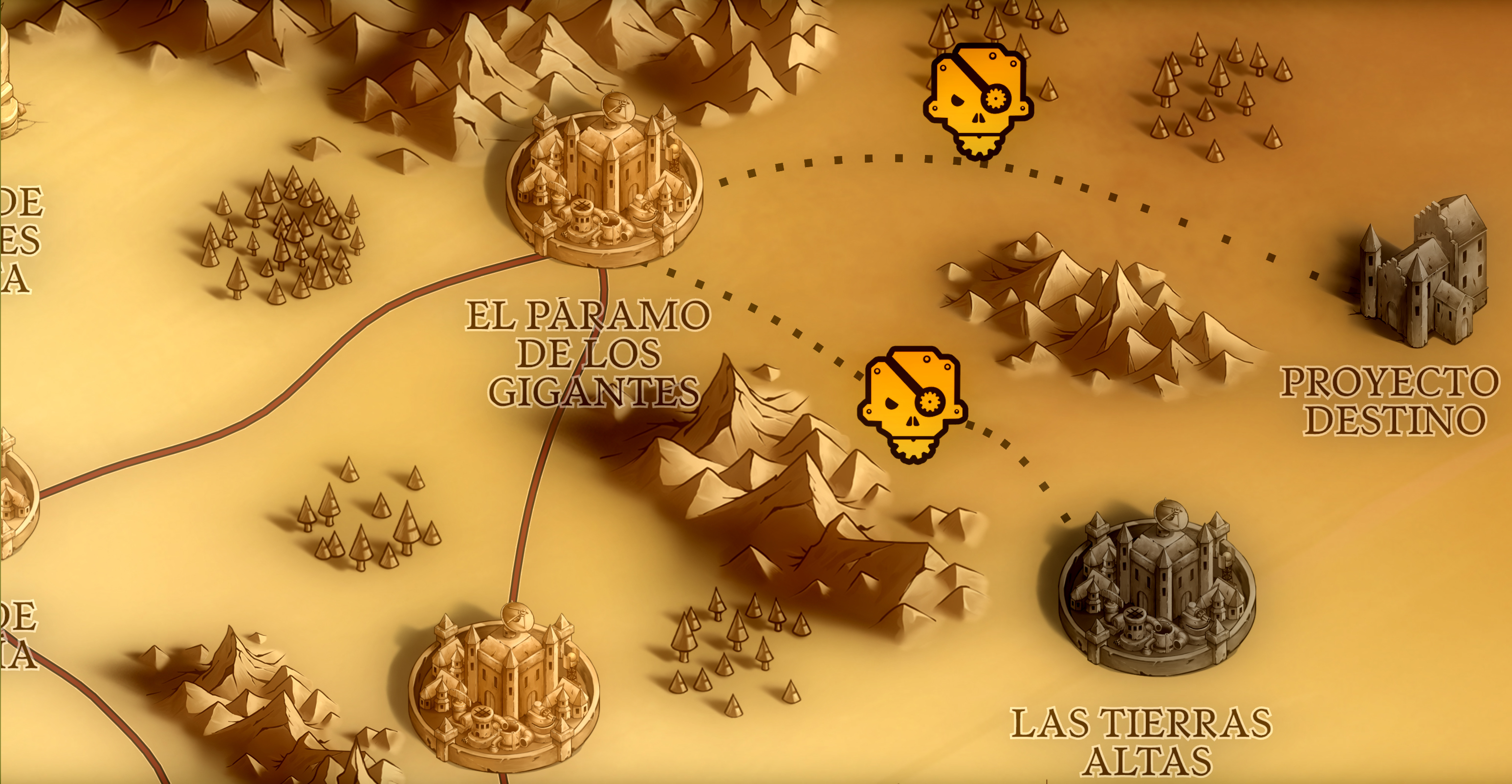 Greetings!
Today we’ll talk about the World Map and some other elements about the upcoming Campaign Mode of They Are Billions.

The World Map
If you followed the development of our last game, the RPG Lords of Xulima, you should know that we love World Maps. They’re a great way to put the player directly into the context of the game while showing their progress. Every game should have one!

In They Are Billions, we’ve taken the integration of World Map with the game even further. For an RTS game, having a world map where you can design your own strategy is a must. As the World Map is unveiled as you progress in the Campaign we will just show a few pieces to not spoil anything. Also, sorry about they are still in Spanish.

Some words about the game setting: They Are Billions is set in the 23rd Century, two hundred years after civilization has collapsed from the pandemic that turned billions of humans into hungry, infected savages. In this lethal world, there’s just one city left standing, Empire City. Built by Empire Leader Quintus Crane, it has prospered and grown inside a huge meteor-impact crater. The Great Crater border serves as a massive natural barrier allowing humans to live safely from the infected.

Quintus wants to expand the Empire outside the Great Crater. Your role in the game, as a young general chosen by Quintus, is to command the reconquest of the wild territories where the infected roam free. And this is where the game starts. You have no knowledge of the world other than what you unveil by progressing in the campaign. In the first mission, called "The Hidden Valley", you’ll have to build the first colony using only the most rudimentary technology (tents, rangers and hunters).

Once a mission is successfully completed, the surrounding parts of the world map will then be revealed, granting you access to more missions.

After the first mission, you’ll have several options to choose from. Select a mission to see all the info: description, goals, rewards... Also the level (difficulty) of the mission will be displayed with red skulls, ranging from 1 (easiest) to 5 (hardest). The level of development of your colony (what technologies you have chosen to research), and your play style, will also impact the difficulty of the missions. Use all this info wisely to choose your next target in order to progress in the campaign.

Some missions are blocked by swarms of infected as you can see in the first screenshot. You’ll need to obliterate them before you can continue on that path. We’ll tell you more about the Swarm Attack Missions and the Empire Army in the next update.

There won't be missions be scripted such us "create exactly three units of this type; build seven structures in this place price; rescue four snipers that are in this position and then destroy this damn town while such a character is directed to... and if you do not do exactly that, the mission will fail... ". No thanks. That takes away the player's freedom, going against They Are Billions’ spirit. The campaign will be similar to the survival mode but on a grander scale. Of course each mission will have objectives, but they’ll be more like "Build a colony of 10,000 settlers on the "Poisonous Swamp", or "Get rid of all the Frozen Lake Giants". How you achieve that goal will be left entirely up to you.

It’s true that tactical missions will rely more on narrative and ambiance because they’re more about exploration. You’ll be able to roam freely inside the abandoned human strongholds where they take place.

What about Tutorials?
At Numantian, we’ve never been big fans of game tutorials, especially when the tutorial is external to the game. We prefer the game to be as self-explanatory as possible, with all the necessary help integrated into the interface, becoming easily visible just by moving the mouse. We like to learn through experimentation and exploration instead of following a step-by-step guide. What could be more boring?! Having said that, the survival mode is quite brutal for inexperienced RTS players. That’s why, during the campaign, some game management basic-information messages will appear at the beginning. We’ll keep them to a minimum, so they won’t become a nuisance to the experienced players.

Campaign Score, Permadeath and difficulty
Another often controversial subject of They Are Billions is the Permadeath system that makes it more similar to rogue-like games. We’ve always thought this was the right way to go because it works perfectly for this type of game. It enhances the tension and fear that the colony will succumb to the infection. This way, the game is experienced much more realistically. Recording and loading would ruin the game experience because your decisions while playing in permadeath have real risks and consequences while if you are allowed to reload the game, your actions don't carry risk anymore as you can go back in time, so to speak, and redo it in another way.

The campaign has 50 missions, which total 40-60 hours of play. Obviously the permadeath system won’t apply to the whole campaign. It’d be tragic to have to start again after playing for 40 hours! :)
During the campaign, the permadeath system works as usual. You can exit the game and continue the same mission when you want, but you can’t reload an old game. If you fail the mission you’ll return to the campaign map and decide whether to start the same mission again or start a different one to gain some improvements by developing the research tree.
But be aware that this doesn’t mean that you can repeat the mission over and over again without consequence...

The campaign score, which will be equal to the sum of the scores of all completed missions, will be displayed in the campaign dashboard. Each mission has a maximum score based on the chosen difficulty chosen, and that you will earn when you successfully complete the mission. Watch out because each time you fail a mission, 10% of that score will be permanently deducted until you reach a minimum of 10% of the original score. By doing this, we’ll reward you for finishing each mission with the least possible attempts, and we’ll avoid metagaming situations like, “I start the mission and explore everything and with that information I start the mission again.”

Regarding the difficulty, we’ve implemented quite an original and effective system. Instead of selecting the difficulty level at the beginning of the campaign, and not being able to change it again, you can set it at any time from the campaign dashboard. That difficulty (accessible, challenging, brutal...) will only affect the mission you are about to play and, of course, the mission score (the score factor). This way, if a certain mission is too hard, you can always make it easier, but at the cost of losing victory points.

Unlike in the Survival mode, a mission score will only depend on its level and the selected difficulty, and not on the number of settlers, wonders, or lost units ... This is because we prefer not to encourage artificial game strategies devised only to increase the score. If you want to raise your score, select a higher difficulty level.

We believe this to be the fairest system. Focusing the game on getting the highest campaign score will encourage you to play with greater challenges, and also to replay the campaign at more difficult levels to reach a higher score that, by the way, we’ll publish on the Global Campaign Leaderboard. Game on!

We’re 100% focused on finishing the campaign so it can be released as soon as possible. If all goes according to plan, that will be June 2019. The gameplay will unquestionably be finished by then, as it’s almost at 75% right now, but other elements like the video cinematic, voices, translations, or other stuff may take us longer than expected.

Therefore, we’ve decided not to add new content to the survival mode until the full game with the campaign is released. Working on the campaign modifies everything in the game, while updating new content for the survival uses a lot the development resources, and we firmly believe that most players prefer to have the campaign sooner than having an updated Survival but with a more delayed Campaign.

Having said that, the exciting news is that with the big launch of the campaign, the survival mode will be updated with two more themes and features like new units and structures. If will be finally the 1.0 version!

Of course we’ll continue updating the game to fix bugs and other issues. And while you patiently wait, you can play the more than one thousand custom levels already available in the workshop. Indeed, the editor came much earlier than what we’d planned precisely to give more content to the players while giving us enough time to develop the campaign.

And that's all folks! In the next update we will talk more about the campaign and the swarm attack missions.