In the latest They Are Billions update we discuss the Trains, Research System, and an update to the map editor.

Greetings!
Today we would like to tell you a bit more about some of the upcoming features of the Campaign: The Train and the Research System.

During The Campaign you will mostly have to deal with reconquering a big territory currently occupied by the infected. In this future world there is just one city standing: Empire City, where most remaining humans live. At the beginning of the game, the Emperor commands you with the task to expand the empire throughout the infected territory. You’ll have to build colonies that will be connected by a railway network.

In the campaign, the train will always play a role in the colony-type missions. In these maps the Command Center will be located next to the railway tracks that will run across the map.

The train convoy will arrive at the colony once a day with a payload of colonists from Empire City to populate the colony. Therefore, in the Campaign, houses will initially be empty and "disabled" until the colonist arrive. 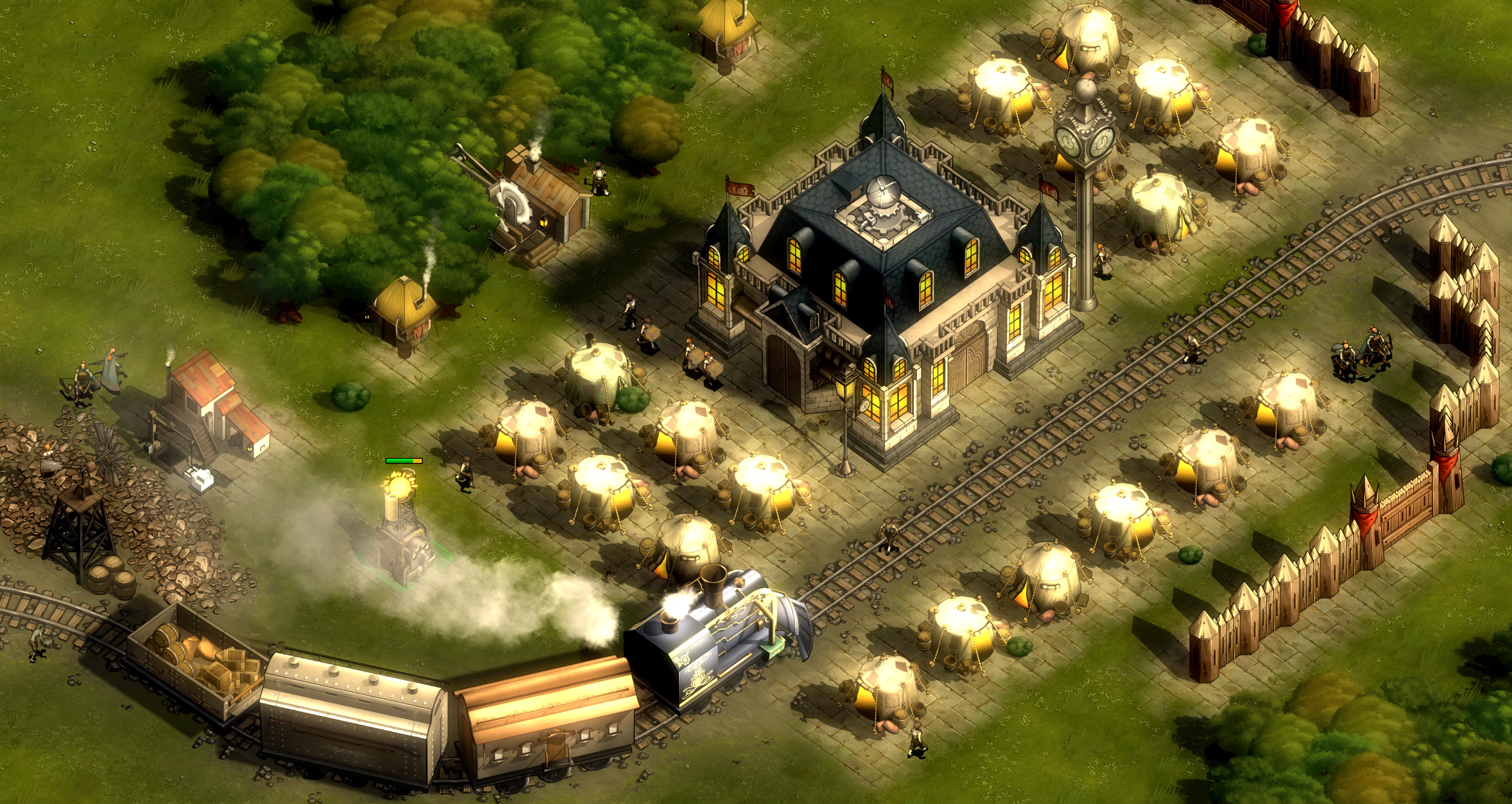 As well as adding realism and coherence with the game story and the style (steampunk), the train enhances the gameplay mechanism:

Structures cannot be built on top railway tracks:
That's something obvious of course, but it presents a new challenge to both expanding and protecting the colony. Colonies will always have those open gaps for the infected to sneak in. Make sure you place your units and towers to defend them well.

The train can destroy the infected:
The train will destroy all infected units that cross paths with it! But don't worry, your units cannot be harmed. They will just be pulled apart and let the train pass. This feature can be used to your advantage.

The Train won't come to the colony while it is attacked by a swarm:
So the train will delay its arrival the next day.

Colonists just arrive to the colony once a day:
So you should take this into account when deciding when to build houses, or other buildings.

You can upgrade the train by researching specific perks in the Research Tree:
So when it comes to the colony it will bring not just colonists, but also resources and gold.

During the campaign you will have access to the Research Laboratory in between missions. There you can use the Research Points you have won by finishing missions, or found while exploring the Old Fortresses.

The Research system will have a really big impact on the gameplay. Consider that in the beginning of the Campaign you’ll start with a very low level of technology that will allow you just to build these elements: Tent, Wood Wall / Gate, Mill, Tesla Tower, Quarry, Sawmill, Fisherman and Hunter Cottages and the Ranger. And by contrast, at the end you may finish with highly sophisticated units and buildings that will allow you to develop much more powerful colonies than the current ones in the Survival Mode.

The Research Tree has more than 90 research perks. Some of them will allow the unlocking of new buildings or units. Others consist on upgrades for buildings / units, or general improvements for your colony. There will be a great variety of them, so every player can have a unique experience while deciding how to evolve their colony. It won't be possible to research all the perks in the tree, so make sure your research strategy matches your playing style!
But don't worry too much about whether you are choosing the right perks. The missions will be very open and can be played in different ways. As in the Survival mode, you will need to adapt your colony for every challenge. But also, you will always have several missions available so you can decide to play them in the order that better fits your technology level.

Here you have a preview image, sorry about it being in Spanish, we will translate the Campaign when is fully completed.

By the way, the current mayors system of the Survival Mode won't be available for the Campaign as their bonus and features interferes with the Research System that will be much more complex and deep and leave the Mayors system just for Survival and Custom Maps.

We have just updated the version, fixed some reported bugs and also added a few more elements, taken from the campaign, to enrich your custom levels gameplay and narrative.

You can place signs in the map to show more information (names, warnings...) about regions of different parts of the map. They are activated by units (with right click as any other interactive element).

Multi-purpose Machines: The Communicator and the Transmitter

You can place these machines in the map and set an script that will be executed when a unit interact with the machine (right click). These elements are useful when you need to trigger an event in an specific moment (instead of automatic events), and when a unit reaches that point in the map.
For example, you can now create more tactical maps where the player must reach and activate those landmarks to win the game.

And that's all for now. In the next update we will talk about the World Map and Missions!