Here is some information about the world of Kalandria, where the action in Noverat takes place. Also includes a short story.

Posted by TheMasquerader on Mar 6th, 2013

Dominated by four autonomous cities and their trade roads, Kalandria is a land of great diversity. To the north, the landscape is barren and rocky, and the Petrified Waste with its stone traps holds many dangers to the unwary traveler. It is where the hunchbacked Gheonoi live. They are excellent scavengers, and are renown for taking anything of significance they might find.

To the north-east lies the Whisperer Forest or the Land of Eternal Autumn, an island separated from the mainland by the Twin Rivers. It is covered with dense forestry that no longer grows nor dies, but rests in a perpetual autumn. The inhabitants of this land are the Whisperers, distant cousins of the Gheonoi and Men. They are tall, pale skinned and graceful, their bodies covered with swirling tattoos. The Whisperers themselves are eternal as their forest, and they're said to posses some of the mistgrace spells taught to the by the Shapers. 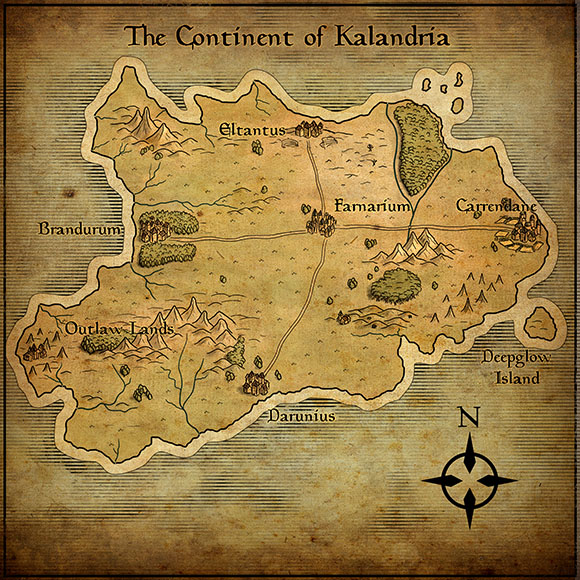 The western region of Kalandria is wild and rugged. The thickly wooded land around Brandurum has resulted in a deep culture of woodwork and lumbering taking root in the settlement. To the south west, the landscape hardly has any resources to exploit and has become the home of bandits and thieves. It is said they have even built themselves a city, hidden in the mountains.

The eastern side of Kalandria is under the influence of Carrendane, the elected capital city, an epicentre of technology and cultural development. Among the most important imports of the city are ores, tools, and weapons from the Iron Mounds, a cluster of mineral-rich hills to the south-east of Kalandria. The hills are littered with mines, prospecting sites and their accompanying townships. It is here, in the Iron Mounds, more specifically in the settlement of Valleon, that the story of Noverat begins.

The Last Caravan (A Noverat Story)

It is evening in the Iron Mounds. The small mining town of Valleon sits beneath a starless sky, the constellations smothered by the billowing clouds of dust that rise from the numerous iron mines nearby. Jay'Dan, the town blacksmith, has left his work at the forge to join the crowd has gathered in the town square. After months of waiting for a caravan, one has finally made its way into Valleon. But the men are ragged, apparently their journey has been very difficult. One of them, an elderly man by the name of Dakkal, a seasoned merchant and the leader of the caravan, begins to tell their story.

"We've set out from Elantus loaded with statues sculpted from the finest stone in the quarries there. We were a large group, paid many mercenaries to guard the caravan. But we still stayed away from the Petrified Waste, afraid of those damned stone traps. Didn't want my men turned to stone, had enough statues to carry already.
Despite that, we still ran into to trouble with the Gheonoi. Those sneaky beasts came to steal from us during the night. We weren't carrying many shinnies with us, knowing how they like to collect 'em. So they must've gotten angry and wrecked some of our carriages. Took us a whole day to repair 'em. But thank the Shapers, we made it safely to Farnarium!"

The old man paused to drink some water. His mention of the Shapers made some of the townfolk shuffle uncomfortably. Most of the knowledge about the Shapers was long forgotten, and while most decent folk ignored the ancient religion, there were still those who believed the Shapers would one day return to Kalandria. But even though noone could remember why the Shapers had left, people were afraid and would rather not be reminded of them.
The old man cleared his throat and resume his story.

"We didn't received the welcome we expected in Farnarium - the Great Trade Post has fallen into disorder. Merchants there were fearful and spoke of more and more bandits raiding caravans, mindlessly destroying the carriages and killing men. Who knows what madness has befallen those brutes in the Outlaw Lands."

"But alas, we were able to trade our goods for spices and silk from Carrendane, and quickly left Farnarium to head to the Iron Mounds. Luckily we didn't encounter any bandits on our way to the mountain pass at the White Peaks, but what found there has greatly troubled us. Both the trade post and the village near it had been looted by bandits. But there were no bodies. We didn't know what to make of it, so afraid the attackers might return we moved on, entering the Tenebrous Woodlands."

"Now I'll tell ya, I've been through that old and dense forest enough times in my life. But now... now there was a strange chill about that place, got me to the bones, it did... We camped there for the night, but none of us could sleep. We heard voices, whispers coming from them ancient ruins among the trees... Then deep in the night, the statues from the shrines that litter the woods... I swear, it's as if they had come to life! We dared not move in our makeshift beds. We were almost afraid to breathe... Something, I tell ya, was lurking in them darkest of shadows. Not a beast after our flesh, no, this was something that would consume our very soul..."

All was still around the small camp fire in Valleon. Even the wind had stopped blowing. Not even a breeze. Jay'Dan watched the men from the caravan. They were pale, with haunted eyes. What had really happened to them out there? He eventually met the old leader's gaze and held it. Was that the light playing tricks on him or had the man's eyes turned purple for a moment? And was that a shadow of a smile of his withered face? A wicked unsettling smile that was.

No, it couldn't be. Jay'Dan shook his head. It had been a long day at the forge and all this talk of strange happenings must have clouded his mind. So he spoke, breaking the uncomfortable silence that had fallen over the small gathering.

"It is late now and you are tired after your journey. Eat and rest. We'll speak more of this tomorrow."

They all began to make preparations for the night, and Jay'Dan left them to return to his forge. In his mind, the image of that wicked smile was spinning over and over again...