The Whipper is a spiritual successor to 1991's Super Castlevania IV. It's not a 100% recreation of Castlevania 4's mechanics. Some things are the same, but others are tweaked or completely overhauled. I've also added some mechanics that didn't exist in Supervania. This article presents you with this week's development which has led to the complete development of the tutorial stage. Now that this level is done, I can start developing Stage 1 of the game.

Posted by TsarRepublicGames on Apr 16th, 2019

The previous blog showcased the graphical development of the tutorial stage, but a few things remained:

The enemy is now a bird and no longer a plain circle. The animation consists of only 2 images - a wing and a body. I deform the images using Unity's animation system. This way I don't import multiple frames and the game's file size stays small. I also change the speed of animation through code, so it will speed it up when the bird is damaged or has to move around.

Here you can see the animation speed up when hit.

Less noticeably, the animation speeds up when trying to keep up with the player.

Most noticeable when using the continuous attack.

Feathers fall with each hit. Just like the leaves, you can destroy the feathers with the continuous attack.

In death, the bird doesn't disappear. It just get's torn apart and you can still interact with the remains. In game development this is knows as permanence. With the regular attack, the remains stretch out briefly and generate more feathers. With the continuous attack, you can lift the remains in the air and throw them around.

In the video below you can hear the audio of the level. There's birds singing and an ambient melody.

white fluff on the left, mud on the right 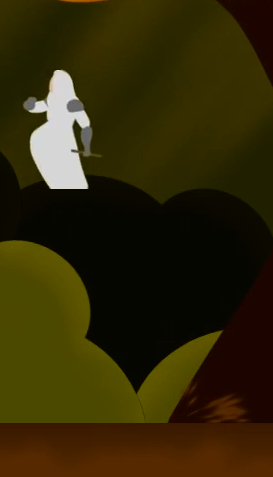 This is all I was able to do this week.

One of the main things I want to achieve with the presentation of the game is to have beautiful environments, but then have gameplay which contrasts that beauty with it's brutality. Don't get me wrong - I won't go overboard with this. There won't be anything too gross in the game. Just a little visible blood and dismemberment, that's all.

Anyway, I've uploaded a new build which you can play with the complete tutorial stage: