Post news RSS The Week of the Wooden Figurine

In which a wooden figurine is detailed--a process that proves difficult; more pottery is added to level two; an editor-bug is fixed; a "dripping water" effect is work-in-progress; and the "general text" font is replaced.

This week's screenshot shows an update to a recently-added collectible, found in level two: 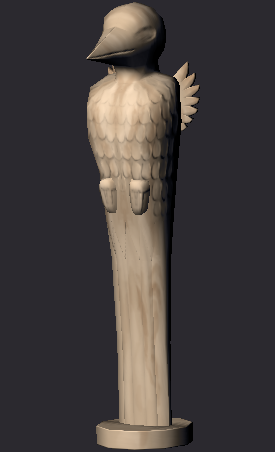 That collectible took up most of the week, as I recall! Even so, a few other things did get done, too:

To start with, the collectible. I mentioned this item in a previous blog-post, I believe: a small wooden figurine that previously was just examinable, now promoted to becoming a collectible. In the week just past, then, I reworked it for close-range viewing.

The geometry had only minor changes: a few more vertices here, adjustments there, and so on. Likewise, the texture-map was fairly straightforward--albeit with the unusual fact of my painting it in the Blender (my choice of 3D modelling software), rather than in GIMP (my choice of image-editor).

It was the normal-map that really caused trouble.

My usual process for creating normal-maps involves painting a greyscale height-map in GIMP, converting that to a normal-map via a plugin, and then going over the result with the smudge tool. And I did make headway in doing so for this model.

But I found that the feathers that line the figurine's body, in particular their slope from end to base, proved tricky to capture in a height-map.

So instead, I turned to 3D sculpting in Blender: I modelled the feathers in a high-poly mesh, then baked that as a normal map that could be incorporated into the previously-painted normal-map image.

I'm not terribly familiar with 3D sculpting; I've experimented with it before, but only a little. Thus there was a fair bit of fumbling and a number of false-starts and mistakes. But I persisted, and found in the end that it seemed worked rather better for this model than the height-map approach.

On the image-editor side, I also discovered the rather neat "Warp Transform" tool in GIMP. This allowed me to "nudge" bits of texture around, and thus to make adjustments on the image-side.

And between sculpting and "warp transforming", I achieved results that, if not perfect, proved satisfactory at least, I believe!

(That painted height-map didn't go entirely to waste, by the way: I used it to displace the high-poly mesh before sculpting, giving me a base to work from.)

As I said, a few things other than the figurine did get done in the week just past: I added more bits of pottery around level two; fixed a bug in my particle editor; and started work on a "water-drip" to include in level two.

But perhaps more salient than those is that I've changed the "general text" font that I'm using in the game.

A Door to the Mists employs three fonts: a "monospace" font for the translation minigame; a "fancy" font for titles, labels, and the like; and the aforementioned "general text" font, for pretty much everything else.

"Everything else" here includes a lot: descriptions, thoughts, conversations, lore-entries, and so on. Thus, with the "general text" font serving so much reading, it seems important to me that it be easily-legible at its intended size.

And alas, for a while now I've been unsatisfied with the legibility of the font that I had been using. While not terrible, perhaps, there were some aspects of it that I felt didn't read well.

So, in the week just past I searched for and selected a new font. (And funnily enough, it turned out to come from the same font-author as the previous one.)

Here is a comparison of the old font with the new; the former is marked with an hourglass-icon, and the latter with a clock-icon. 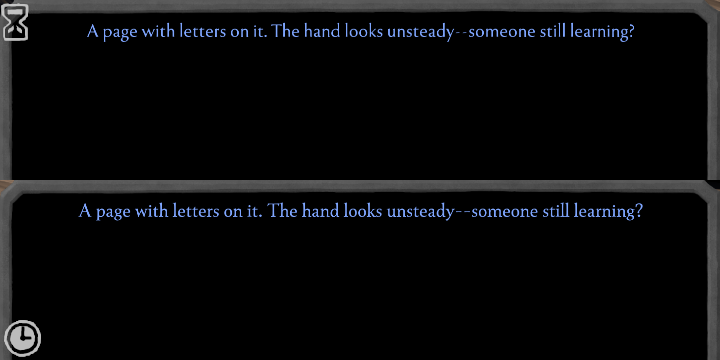 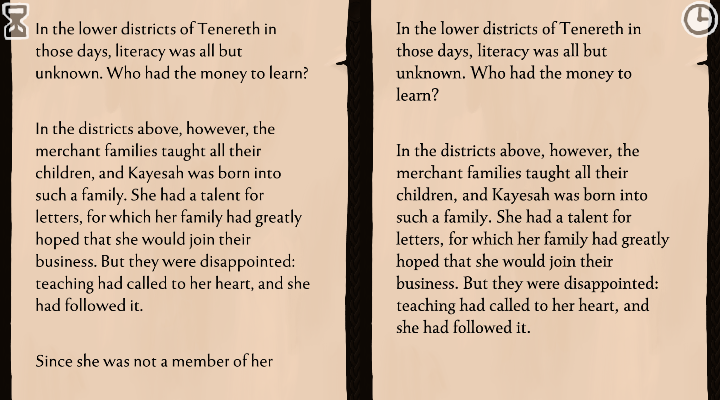 (If you're interested in the font, it's "Seshat", by Sora Sagano. (Dotcolon.net))