This week, we’ve been working on many things.

• in continuing work towards the end-goal in the Water Cave, I’ve added trim to the base of walls within the Dungeon, along with improving the UVs.

• there’s now 2-handed attack animations! No more swinging a claymore with one hand, in other words. I’ve animated both side & overhead attacks, including a power attack for each as well (all WIP). More animations to come!

• clouds have been revamped. In messing around with particle systems and their shader, they now have more depth to their appearance and look better. Don’t you agree? (Before & after)

Next up, Jon with audio and programming:

• you can now store items that save and load in the Homestead’s goody chest. As it is saved in the scene data, all players will have access to the chest and its contents.

• audio vocal adjustments when wearing a closed-helmet. Your vocals will sound muffled with some reverb as if actually wearing a helmet. 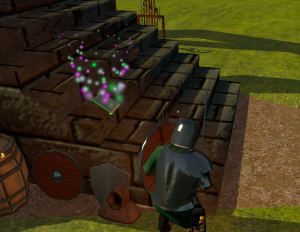 Through the console, any gameObject present in the current scene can be selected. Once selected, various commands can be input into the console to affect the selected gameObject.

• we are now using a new fps calculator courtesy of Jasper Flick. If you are interested, here’s the link: Catlikecoding.com

• we have also put in the most exciting feature yet, the preliminary credits menu! We can now give credit where it’s due.

• Jon has also continued working on the functionality of switches.

Last of all, notable bug fixes: