When i started working to this game it was evident that one of the main topics would be the world design. I wanted it to be something big, to explore and to get lost in. Some obvious sources of inspiration were the old NES and Master System titles that shaped the concept of "metroidvania" platform adventure: Simon's Quest, Lord of the Sword, Metroid.. but i wanted it to be with a different pace and timing. While many of those games show come complex "indoor" exploration, with dungeons, buildings, and very short or limited outside sections, i wanted just the opposite: large environments,
interleaved paths, to create a huge overworld. 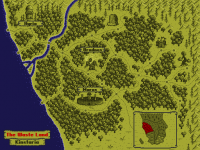 map of Kinstaria, one of the 7 realms.

Kinstaria, a wooden area where the game starts. There's a big city in it, though, and it stretches to the western sea.

Yunnia, the southern swamp area: haunted houses, villages, and a big city on the coast where ships leave to Kono island.

Shangar, the desert of south-east. Small villages and oasis in a sea of sand. Careful while exploring the ancient ruins!

Harvan, where high mountains separate the west from the east, this is the door to the northern realm.

Brinnar, the northern realm, once an independent land, separated by high walls, covered in snow all year long.

Indar: where Halos, the realm capitol is, a vast land with towns, castles..

All these areas have their own visual style, peculiar enemies and a separate map, and are made of dozens of interleaved levels that can be walked around freely.
Some secrets ( upgrades, weapons) await to be found, so make sure to talk to the villagers to find informations.

Unlike many "metroidvania" games that seem to be open world, but are actually quite linear, with forced paths and sequential bosses, this game has a truly open approach. This means more freedom but also be careful: you'll also have to be prepared to some troublesome encounters!