This article covers the game's "dynamic mode", which will be featured in the upcoming, free 08/08/19 demo.

In just a few days (08/08/19, specifically) we're going to release the next free demo for our game. Its focus will be on the "dynamic mode", while the story mode demo is scheduled for a later date. Before you ask: no, we don't have a date yet, although we do aim for it to be released before the end of this year. In this article I will explain what the dynamic mode is and also give a short rundown on what's on the horizon for UW after 08/08.

Unconventional Warfare will have two game modes: The story mode and the dynamic mode. The former should be pretty self-explanatory. It's a more linear experience that focuses on telling a story. While our author works on the story, which will be an important aspect of the final game, we do realize that we can get more mileage out of the gameplay mechanics outside of that. The purpose of the dynamic mode is to do exactly that. Instead of a story, you get a randomly generated game that makes use of the same gameplay mechanics.
Just in case you wonder why we didn't call it "free mode", which would have been a more conventional name for that sort of thing. As it turns out, my boss had to clear up the misconception that the "free mode" would be a free trial version of the game and decided that we better find another name for it. The obvious second choice would have been "sandbox mode", but sandbox is well-defined genre that's quite different from what we're going for. So dynamic mode it is.

The dynamic mode is heavily inspired by the indie game hit Faster Than Light, but it does have some substantial differences. I'll walk you through the similarities and differences to show you what to expect on 08/08.

Let's start with the map. Just like in FTL, it's a graph. This means that instead of being able to move freely, you can only move to the neighboring nodes of the node you're currently at. This movement is turn-based. While you're at a node, managing your squad, making a decision about where to go next or whatever the case may be, the game is paused. 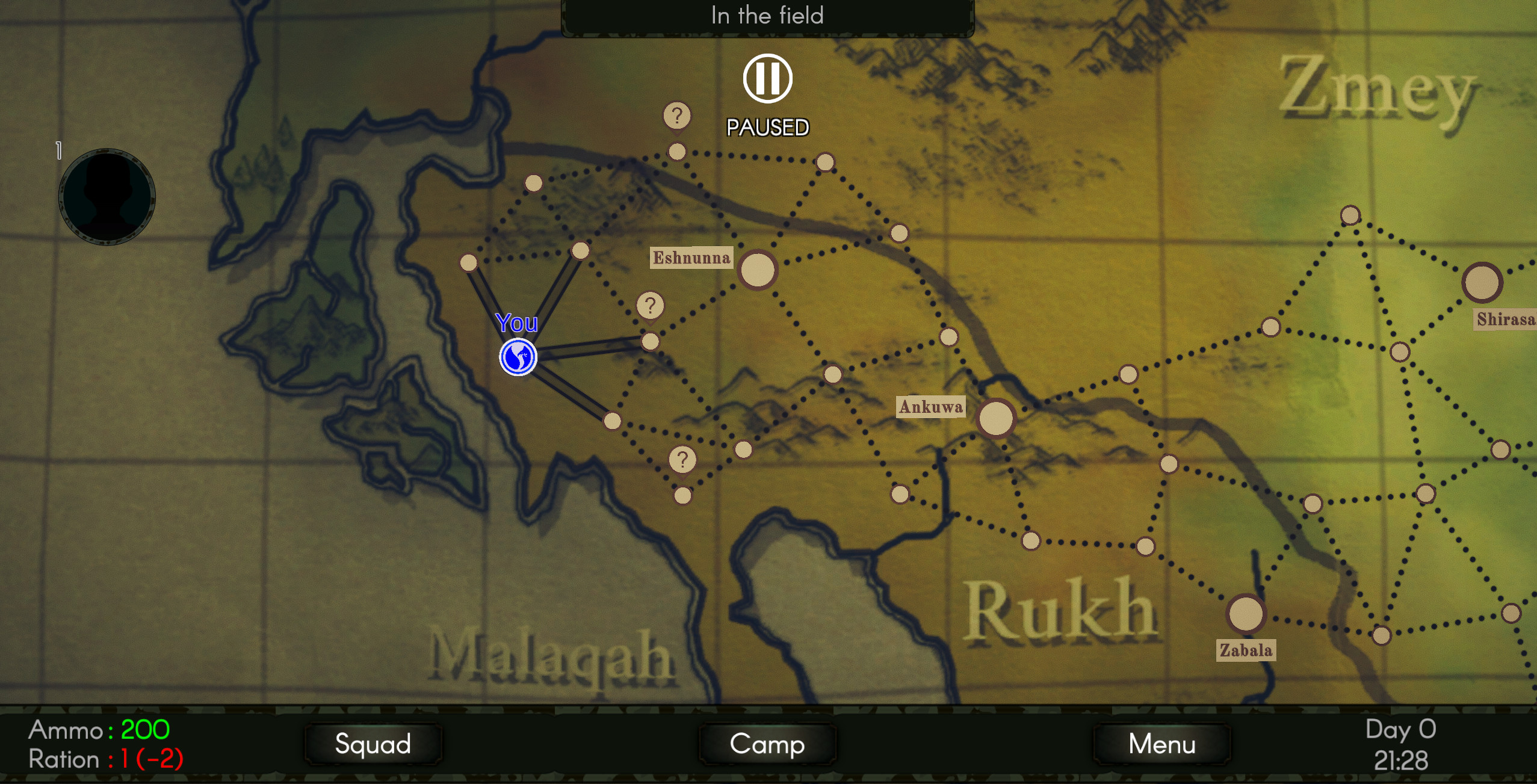 You move between nodes by right clicking on one of your neighbors. The game will unpause, your squad will then move and some amount of time will pass. This will cost rations, which I'll explain in greater detail later in this article. When you arrive at your destination, a number of things might happen. Nothing, an enemy encounter or a random event. If nothing happens, you're free to manage your squad, move on or camp. If you encounter enemies, you will have to defeat them first. Random events function much like they do in FTL. You get a textbox explaining what is going on and have to make a choice.

Note the [6 Rations] part. This means that picking that option will cost you 6 rations. If you don't have enough, the option won't be available. The events are categorized in three tiers, with T1 events being the easiest. The further you get away from your starting locations, the more the events you'll encounter will shift towards T2 and finally T3 ones. Thus far, UW looks like a FTL clone in a different setting. The first major aspect that differentiates UW from FTL comes when we zoom out. 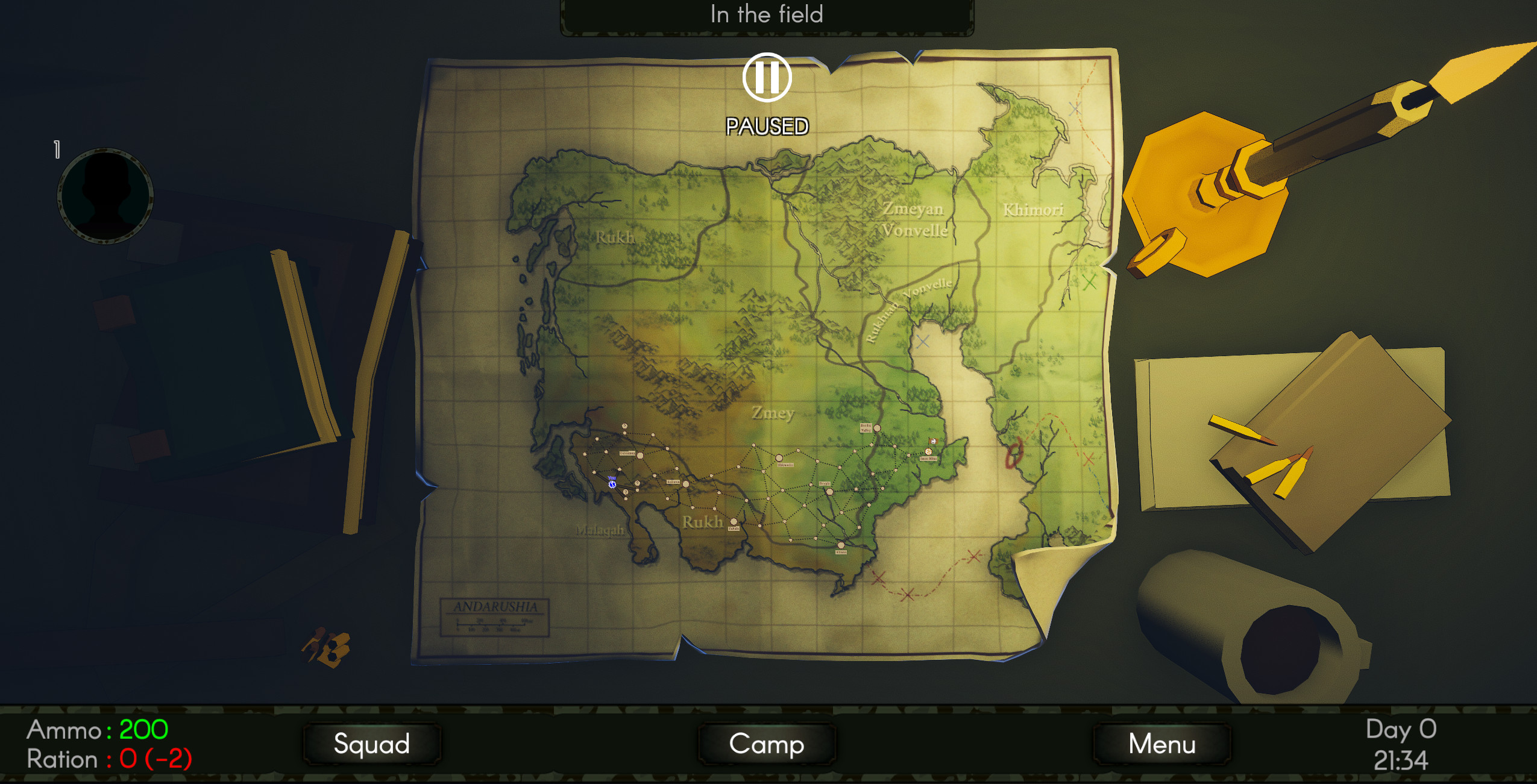 Whereas FTL has a set of separate, small maps (sectors), UW gives you one big map to play with. On it, you'll be able to choose your path freely, you'll be able to explore the world, complete quests in any order and build up your squad for the final showdown. The map consists of major and minor nodes. Major nodes denote important places (e.g. cities) for which the levels are hand-made. They are separated by minor nodes. Camping and combat on minor nodes happens on procedurally generated levels. Since hand-crafting the major levels takes time, the demo will only feature a few of them. You can see the strip of nodes you'll be able to play on in the screenshot above. In total, the demo map already contains more nodes than FTL does. Now imagine that entire map filled with roughly the same density. That's what we're ultimately aiming for.

You start at the left end of the graph, while your target is at the Imon Mine on the far right. Your goal is to reach and defeat the enemy there, but you'll have to build up your squad on your way there. To help you get started, you start with three quests already marked on your map. 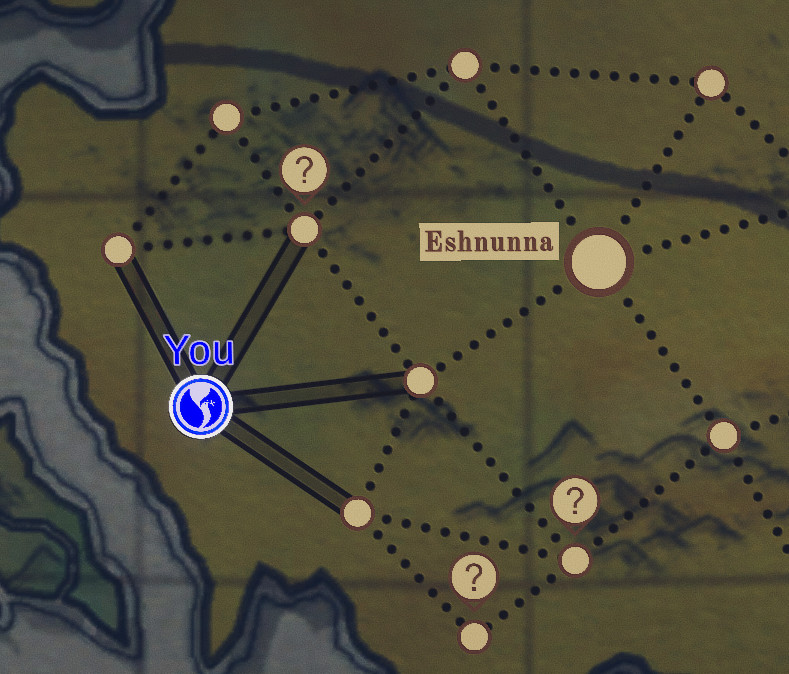 Similar to FTL, you have to strike the correct balance between exploring as much as you can and hurrying up. Your actions don't go unnoticed and after a while, the enemy will dispatch pursuers to deal with you. These start at the major nodes on the left side of the map and spread out from there. 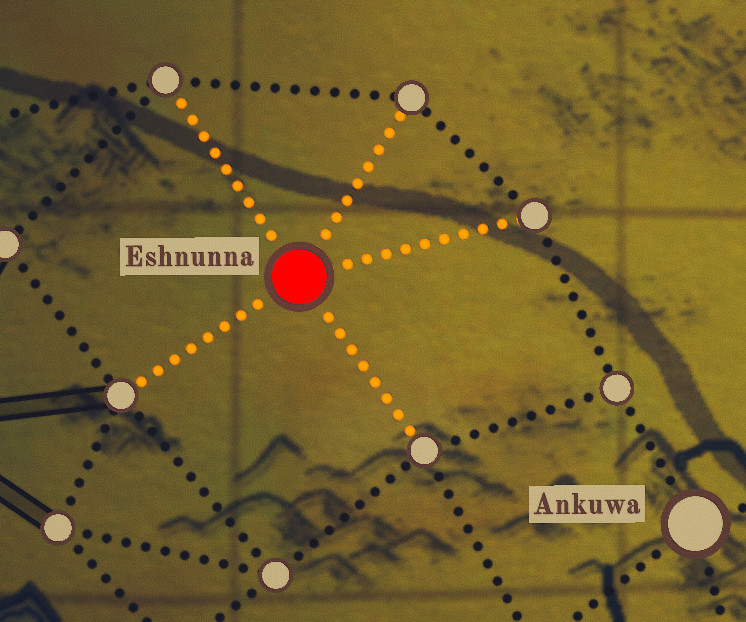 Their spread rate depends on the number of neighboring nodes. On the screenshot above, Eshnunna is connected to five nodes that are not yet occupied by the enemy. This means it'll take five turns to occupy them. Nodes go from normal, to orange and finally to red. Orange and red nodes have a 100% enemy encounter probability, with the latter having more intense combat. If a node would already have an enemy encounter, it will get amplified. This means that it's important that you keep moving right. Not only do they spread relentlessly, over time they will also be dispatched from multiple cities.

Each turn costs rations. Rations can be obtained through traders, looting and quests. In the squad menu, you can adjust the rationing of the individual units. The more rations you give your units, the stronger they get. However, you need to be careful with your resources. As your squad grows in size, the amount of rations you need per turn could get quite high, if you choose to be very generous with them. For now, you won't starve and will just have to deal with debuffs.

Lastly there are the enemy convoys. When the game starts, a few enemy convoys are spawned somewhere in the middle of the map. They will slowly move towards your target. Each convoy that makes it, will reinforce the enemy forces in the last battle. Those convoys are hidden at first, but can be revealed by completing quests. You can then intercept them and stop them in their tracks. Just beware that they are guarded and that they might merge on their way, which will make you fight both convoys at once. This will be either extremely convenient or difficult, depending on how well-equipped you are.

Since we wanted to release the demo on this deadline no matter what, there are certain things that won't make the cut. I'll give a brief overview over those that are on the immediate horizon for us, the things we'll be working on right after we release the demo.