Part 2 of the Grapple Knight redesign development story leading up to Supanova 2012.

First and foremost, we switched our priority to the PC platform. This was because if we truly wanted to invoke that sense of nostalgia, players needed to feel it with a controller in their hands (or keyboard if that's how you rolled back then). Additionally, it gave us some breathing room if we were ever to make changes that could potentially complicate the game on the mobile platform. In a nutshell, we wanted freedom to make the game we wanted without platform and core gameplay fighting for design priority.

If you go over to the games page and play [Dev Build 0.1.5.1] and compare it to our [Supanova Build] you may notice a few things. Besides a few obvious things like new animations on our hero, the level look and feel as well as quality of life tweaks to the hero's movement have been had. We wanted the game to be much faster and more fluid, whilst giving the players tighter control over their actions. The overarching theme of the game is: momentum action platformer.

The idea of a momentum combo platformer, funnily enough, was something we had decided on midway through overhauling the game. We had stumbled across a bug with the ramps, where when you landed from a flinging surface (green surface), or jumped directly onto a ramp, you could "bounce" off the surfaces like a trampoline and boost yourself across distances greater than a normal running jump could take you. The satisfaction of landing these jumps correctly and the feeling of forward movement felt really good. So we decided that was the direction we wanted, but of course, seeing how it is currently a bug, we'd have to fix up the bug and then implement it as an actual feature.

A) Regular Jump; B) Ramp enhanced Jump; C) Momentum used to bounce without utilising the Grapple Surfaces to get to the other side.

The level design was changed to accommodate for our Supanova Build. We wanted to try to eliminate hard blocks as much as possible and implement ramps to allow for more forward movement. Singular grapple points were removed entirely, making way for grapple surfaces instead. This was meant to aid in faster movement where precision was not as heavily reliant on players hitting these key points which can cause frustration. The hero's movement was quickened, allowing players to traverse the levels much more fluently, the knights jump code was also changed to respond to how long the jump button was pressed, again, giving players tighter control. 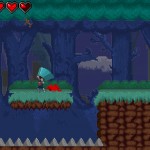 The next point was something we were going to change regardless of a redesign or not, enemy health... enemies were reduced to take less hits... A LOT less. Like holy moly, what were we even thinking having enemies that took A BILLION hits to die? While we were in the act of bringing down the HP of enemies we also wanted to add in big visual alerts on enemy attacks. This enabled players to easily read when an enemy was about to strike from a safe enough distance to react.
Which brings me to my next point - combat. People who got to meet us personally and played the newer updated version got the down-low on the combo system. Essentially what we wanted to do with the implementation of the system was reward players for being able to maintain their combo hit numbers through attacking enemies and grappling throughout the level. Whilst the demo doesn't flesh it out completely, the system will reward players for reaching certain combo number milestones by awarding buffs and effects that allow you to continue doing what you have been doing to ramp up your combo, but being able to do it better.

Where do we go from here?
The game turned from this slow, clunky build into something faster, more action packed and with a clear defined goal in mind: momentum combo platformer. I want to share a piece of info on what we're doing with the combo system now that we've had time to really think about it.
The general explanation I'd give to you guys who sat down to play test our game at live events is that as you hit these combo milestones and we reward you with powers. You may have heard me saying things like;

"When you hit the 20 hit milestone for example, you would get faster movement speed and longer range on your attacks,"

After Supanova, we started talking about how we could develop this further, to add a meta to the game. This would give the players more options to play the game as it came, rather than stagnating the same actions over and over again. So we developed upon the combo system further, whereby the player now has the option to pick and choose the kind of powers they would acquire as they climbed up the combo ladder. This means that as we build the level we have to start strategically placing "perks" for players to find. As players find and collect these perks in a sort of perk pool they can place individual powers into a combo meter set to Tier 1, 2, and 3 - similar to how fighting games work off their Super Meter. 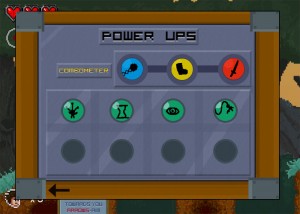 So there it is, our experience into redesigning Grapple Knight as you see it now. We're really happy with the results and if Supanova and iFest were any indication, so do you guys. I'd really like to extend a big thank you to everyone who validated our decision to do this. Also, thanks to everyone who took the time to read through this entire article, I know it was probably a long read for you guys and I hope you got some good insight. Having you guys read through all of this means a lot!