I started scribbling down my first notes and ideas about the Battle of the Atlantic concept on a cold wet September night last year while on ‘guard duty' down the family farm. My ideas evolved around a series of strategy games from the early 90s called ‘Great Naval Battles' which is my favourite strategy game of all time. So much so I still have a Pentium486 knocking around so I can play it if I get the urge. Add to it more modern inspiration like that from the excellent Silent Hunter Series (we

I started scribbling down my first notes and ideas about the Battle of the Atlantic concept on a cold wet September night last year while on ‘guard duty' down the family farm. My ideas evolved around a series of strategy games from the early 90s called ‘Great Naval Battles' which is my favourite strategy game of all time. So much so I still have a Pentium486 knocking around so I can play it if I get the urge. Add to it more modern inspiration like that from the excellent Silent Hunter Series (well once modded by the awesome community anyway!) ,the superb Flight Simulators by Maddox and C1 Company and the Total War Series by Creative Assembly then, if you know any of these games, you should start to realise the vision I have for my project.

The first step, as with any project is to write a design document which provides an overview and reminders about the main aspects of the game, what your audience is, what your aims are, how your project is different and How the main game mechanics will combine and ultimately work together to give a good gaming experience for the end user. I thought the design document was quite easy but found out that if you do it properly, it really isn't.

I used Marco Roy's Template which I came across on Moddb (I can't find the link to it now, but a slide show can be seen here Slideshare.net) and although there is still chunks missing from my design doc ive managed to cover most of the elements Marco gets at in his template. After a couple of months of writing I had a GDD that spans over 80 pages , includes UI Mock-ups, lists the main game mechanics and there effects on the gameplay and the main game features.

While writing the GDD, I started the next obvious step, Research. Now there are several facets the blanket of research comes under. The first is general research on your game idea, is there any competition from mainstream game companies with similar projects in the works? The answer here, as of writing, is no. How about Indie/Mod Teams? Again this is generally No, but there are afew naval strategy projects knocking about if you decide to search for them.

Next Question Is whether there is a market for your game at all. I have two emotions on this point. Im making it because I want to, as you will discover In a future post. This for me is a hobby project, it will take a hell of a long time to come together, but its something im doing in my spare time and enjoy doing. That being said. Its always nice to make money from your project, especially one as ambitious and large as my vision and having posted on various Naval forums, there is certainly a vibe that people would pay to play a game like the one I have in mind. As said previously the Silent Hunter Community is pretty hard-core and despite being given some shockingly broken games to start with, from a mainstream developer. The community has worked together to turn them into rugged diamonds and I would hope that my project would create that same kind of community vibe.

The final Facet of Research, in this case, is of course Historical research and to me this is vital and will be the lynch pin to pull my game above any main stream game that may happen to come out that is similar. In the last Year ive read more books than I think I have done at any previous time in my life. Ive stock piled about 15-20 books on the subject of the Battle of the Atlantic, Weapons and data.Ill no doubt make a future post going back over some of them as I want to go through them again and annotate items of interest.
But to name afew books I have in my collection:-

I recently received ‘I Survived Convoy PQ17' which is next on my reading list after ive Finished ‘The Twelve Caesars' which profiles the 12 men that Ruled Rome after the collapse of the republic. I love my History :).

This started off difficult but then as you will discover was quite a simple choice in the end.
The biggest issue I face on this project, is that im not a programmer, im primarily an artist and designer who has worked in the software industry in the past. My primary aim, at the time was to get some ground work done, either artistically and/or some basic programming to show intent and try and get a small team formed to work on my vision, maybe dangle a small sum of money to increase my ability to persuade. Once I get a programmer to work with we can talk engines to use and switch if need be.

My first choices were Orge and Torque, Id had experience of Torque at my old job afew years earlier and was pretty familiar with it. But after some simple prototyping it became clear it was nowhere near up to doing what I needed to do it. Also visually it was way behind the competition and as the saying goes, graphics don't make a game, but as an artist, sadly I am a sucker for something that looks decent visually. Ogre though is visually more up to date and flexible than torque, I simply couldn't get my head around the programming.

So with no team, no engine and an ambitious design document, 8 months ago this project was looking dead in the water.

I then tried Unity and suddenly things perked up. The amount of projects that use it and variations between those projects show its versatility is unmatched. It has rave reviews which dare put it side by side with the likes of Epic's and Crytek's masterworks. It is also free and in the grand scheme of things, cheap if you want to upgrade and go pro. Its community is very active and helpful.
I got replies to my dumb arse questions within about a day and soon I was thumbling around with
the Unity Engine and Monodevelopment combination.

After a couple of days of thumbling it became clear I was way off the mark to produce the goods. So I went through many tutorials and particularly enjoyed working through Burgzerg Arcades's Superb Hack and Slash Tutorial series for several weeks to improve my knowledge and know-how.

Having worked through about two thirds of the BurgZerg tutorials I went back to my own project and armed with my new found genius started to actually pull some basic elements together and in this time I found a programmer to work with, Who instantly disappeared again, but not because of the project, or me, he got himself a pro job about 2 weeks after joining me, but in that time had done enough to give me a basis to work off.

This was all about 6 months ago, Since then Unity Tech has been pushing the Unity Asset Store which now has so many good things available that Unity is now a truly fun engine to work with. I have a bunch of 3rd party tools and extensions which have been invaluable to my progress and although theres still those occasional bad times when I feel overwhelmed and think my project is too ambitious Im sticking at it and generally am grinding through the problems one by one. Im now feeling satisfied with progress, which some months ago would never have been and am optimistic that, though there will be some rocky patches ahead, there is also some good times on the horizon as well.

And yes Ill post more info about those tools and extensions that have been so helpful to me at a later date.....:) Im sorry this is quite along post but I thought it would give you some insight into my thinking behind the project im working on. I will try and make some kind of post every week,so watch this page to stay up to date with my ramblings and progress on Battle of the Atlantic.

If you have an questions drop me a line and ill try and answer them and slowly build up an FAQ page. 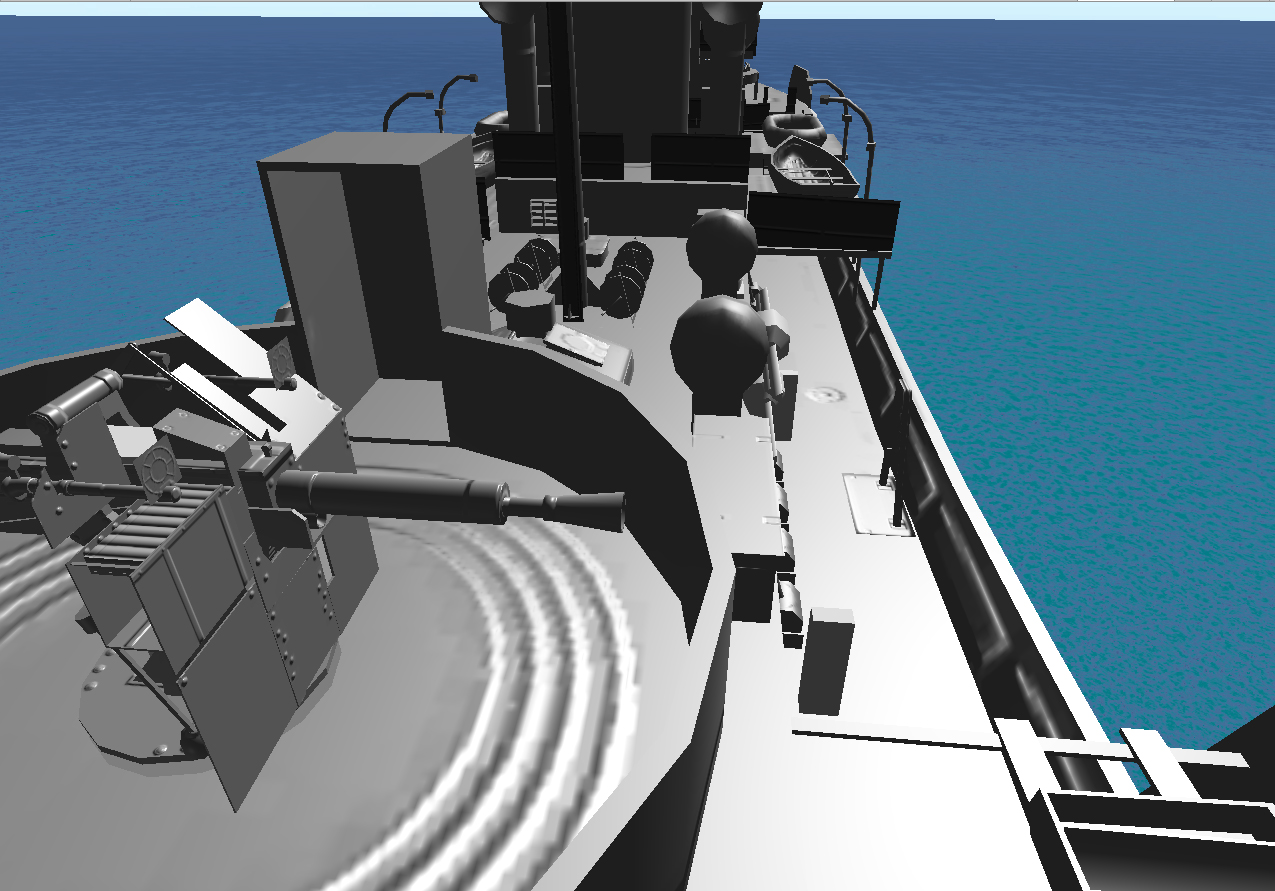 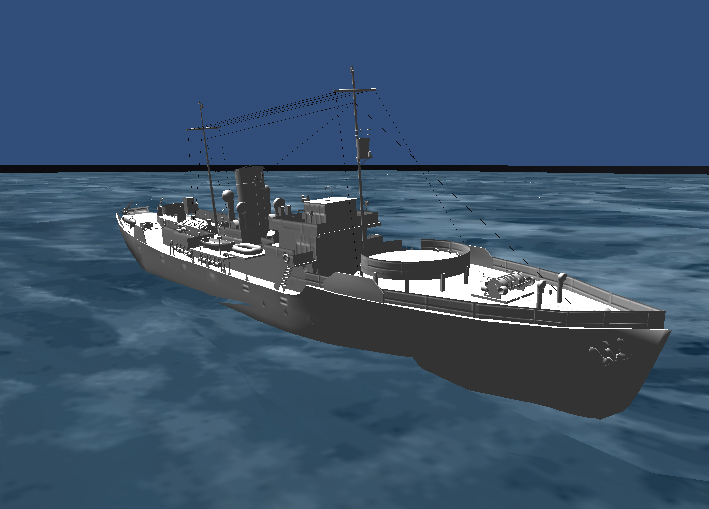 My first efforts from several months back trying to get my models into the Unity Engine.