Post news RSS The State of Gas Powered Games and why indie?

In this news post I will be going into depth on why Gas powered Games is going indie, What indie means to Gas Powered Games, the first ever in game screenshot from wild man, the state of Gas Powered Games and what happens to wild man if the Kick starter does not fund.

For those of you who are aware gas powered games is trying to fund Wild Man - An large open world Action RPG/RTS hybrid. They currently do not have enough money to fund the full development of wild man on their own. So they took to kick starter. In order to make the full game they need 1.1 million in order to do so. The game is planned to be fully mod able with the project mercury tool set(Total Conversions/addons, new worlds, just to name a few) and they are going to be licensing out the Mercury tool set for those interested in making games.

Interview with Chris Roberts and Chris Taylor on Super Joystiq.


So what does it mean to Gas Powered Games to be indie?
It means that they can connect with their customers (or as Chris Taylor calls us investors) better than ever before! For example diplomacy was not going to be in wild man - Now it is being looked at being a core feature (Diplomacy with other warlords, tribes, etc.) Just because someone spoke up!

It also means financial freedom from the publishers who take 20% of your earnings and demand that all the money that you borrowed from development of your game be paid back. Which means no revenue for the developer. 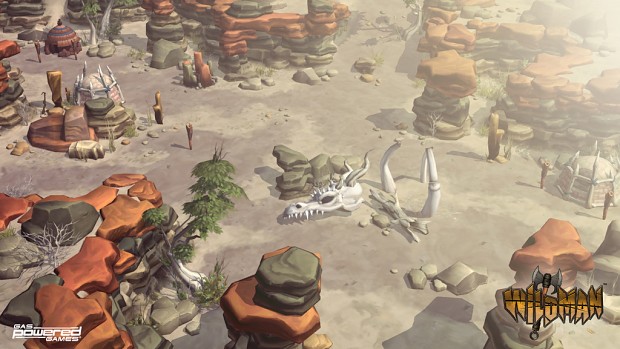 In closing - I hope that you back Gas powered games Kick starter. It can be found here.

Also do not forget to check out the Twitch.TV Stream at 5PM Pacific Standard time for free Swag giveaways and to get your questions answered about GPG.

I owe it to Chris to back this project for the many hours of entertainment he gave me with dungeon siege. This should be a great game.

Hey Guest! (Sorry I do not know your username)

But thank you for backing.

Backed it today. I realized in hindsight how many hours his previous games have given me and I heard him talk on Joystiq. It's totally worth it to see what he can deliver.

Hey Guest! Thanks for backing it means so much to us both the GPG team and the Backers (I am a backer BTW)

So will there be different eras in Wildman like in Empire Earth (up to the far future) or will it focus around the Stone Age (up to the Iron Age for example)?

However, I like your concept so far and it's definitely worth a look.

I hope they actually make a plausable ww1 age (If they go for the "era's through time") With trench warfare and all that :3

They are planing to go up to at least to the year 1500. So Early gun powder weapons and Very refined swords, Axes, and Bows.

However they are releasing a modkit called project mercury!

So if you want you can add trench warfare into the game! You can add Machine gun nests. On top of that you can make a whole new world with the toolset!

Personally I love the idea of World War One in a Action RPG RTS hybrid game.

There are not eras per say but there is technology that you can steal, trade, discover. You do not Research tech like in age of empires or Empire earth. You Discover it in the overland adventure, yo take it from defeated boss monsters, other warlords, merchants, etc.

Sounds promising. Can't wait to see the this in action.

I've backed it, really hoping this one gets funded!

Glad to see you on board for this wild ride.

We should have more concept art up soon and gameplay by next week. The Gas powered Games crew is really pushing really hard.

BTW I am sending you a PM.

Backed! Would back the project alone but the fact that its Gas Powered just double sealed the deal. Good Luck!

They have very easy to use mod tools as well!

What I find interesting about your concept is that dinosaurs seem to be included in the evolutionary run as same as the humans are (https://www.indiedb.com/games/wildman/images/jungle-concept-with-dinosaurs#imagebox). This reminds me of the theories of some scientists, who believe that some dinosaurs would have been in the role in which humans are today if they had survived.

We should be getting more concept art soon. Maybe a female counterpart to wildman? *Hint* *Hint*

How do we know this money will not just go to pay their debts? I like their games, but companies in difficulty do desperate things in my experience.

If it can be shown this cannot go toward debt then I would maybe fund this.

They are currently Debt free. Which is why they are able to fund this on the cash reserves that they have. Atleast as far as I am aware.

They need some major PR coverage. ASAP as far as I am aware.