Our cargo ship has an opportunity to be destroyed!
The ship is undermined by two torpedoes, in screenshots you can see consequences of
hits of the first torpedo and the second - a fatal torpedo. 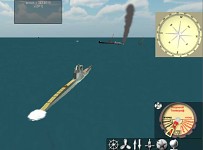 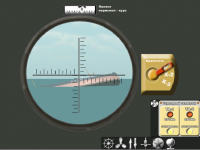 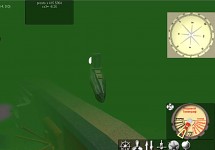 I will tell about the principles of destruction. Each object has health volume. Each shell, mine or torpedo has the level of a loss. The ship can be destroyed a gun, a torpedo or collision. If the ship small, to it is enough one torpedo but if it didn't drown, it isn't necessary to spend one more torpedo, it is enough to finish of it two shells from a gun. With mines all also. Having been undermined on a mine, the ship to death needs to sneeze only, on it such ship will be destroyed even if it is simple to crash into it. On the submarine the situation repeats if the player подоровался on a mine, turn, even one shell of small caliber will suffice for its elimination.