The Battle of the Great Plains is now part of the full game. There's also a small update to the demo.

I've finished writing and scripting the seventh major battle of the game: the Battle of the Great Plains (Campi Magni).

Now that I'm working on part eight, the second campaign involving the Roman invasion of the Carthaginian mainland in Africa is almost done: all that remains, as far as pitched battles are concerned, is the final showdown with Hannibal at Zama. This campaign introduces a lot more random events and encounters, even when "collecting" supplies in villages and settlements on foraging missions, and I will add a few more over the next few days.

If instead you choose to retire, you will get 200 bonus points for surviving two campaigns and live happily thereafter. Time to face the game with a new, different character.

The new version includes some cosmetic changes. For example, the plumes on a couple of helmets have been modified for the sake of historical accuracy. 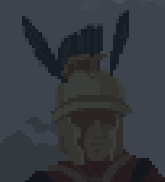 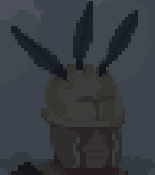 Also, as promised in a previous article, the sword indicator used to represent the chance of success of a combat action has been replaced with a more intuitive thumbs-up/down icon.

In the picture above, the chance to hit the opponent's leg (H) is significantly below 50%, but since he wears no armor on his legs, the chance to bypass the armor (A) is 100%. All these indicators are explained in tooltips for each action and more details can be found inside the in-game combat manual.

The way overtraining can affect your character's Morale has been changed a little. Basically, there are three types of exercise: javelin, melee and workouts. If you avoid focusing too much on one of them, it should help reduce the risk of Morale loss. Nothing prevents you from ignoring the loss and focusing on your favorite practice. You should find out what works best for you.

Finally, there's a new small random event that can happen during the game sections covered by the demo.

The full changelog is here, on the official website.