Plans for the future, including Greenlight, Kickstarter, and closed beta!

As many of you may have noticed, we have been quiet on the front lately. The reason for the silence is that we are preparing for three major events; Greenlight, Kickstarter, and a closed beta! All of this requires a lot of effort on our end, including a trailer for the above. The plan moving forward is:

Steam Greenlight: We will be adding our game on Greenlight! Any and all votes to help us get on steam would be greatly appreciated. Steamcommunity.com

Kickstarter: Around the same time Greenlight goes live, our Kickstarter should go as live as well. We are hoping to raise ~$7000 to pay not only for our wonderful musician, Chris
(http://www.chrischristodoulou.com/), but to pay for a newer version of GM in order to provide mac support. All details will be coming soon. This leads into..

Closed Beta: Our last update, Alpha 0.29.2.2, is our last official open alpha. Thank you so much for all the fans who helped test and shape our game into the way it is today. The plans going forward for the game is to transition into closed beta, which access can be purchased through our kickstarter along with a key to the final release.

Many of you probably have lots of questions on your mind, so here are a few answers;
Q: Why move the game into closed beta?
A: While the feedback we get is wonderful, we must move ahead in our process to release the game. Because we are indie developers, we don't have the funding that other major companies do to pay for programs and music. As much as we would love to keep open alpha going (really!), we have to advance our game forward if we want the best game possible.

Q: Are you going to release any more public builds?
A: The same time the Kickstarter and Greenlight goes live, we will be releasing a final build, Risk of Rain Demo, for free. This build doubles not only as the last public release, but as a demo version for people who are unfamiliar with our game and would like to try it out. The demo fixes the bugs from the alpha, along with a few new features, like unlockable items and semi-random levels.

Q: How do I get into the closed beta?
A: For closed beta access, simply support our kickstarter! The price is not set in stone, but it will be around the same price as the final release cost, and WILL include a key for when the game comes out! The current plan is to host the closed beta on Desura, but again nothing is set in stone.

Q: What is in the closed beta?
A: The closed beta, compared to the demo, will contain many many more items, levels, classes, and various other updates as we develop them.

Q: What are the rewards for Kickstarting?
A: Contributions to the kickstarter will come with a guaranteed key of the game on release. While higher tiers are still in process, it will surely include things like designing your own items, enemies, bosses, and classes!

Q: Where can I get the demo?
A: Here!
We truly hope that you continue in the adventure of developing our game. As first time developers, we are learning as we go along, and our game has been more successful then we could have ever dreamed. Thank you so much to all our fans on AGDG, indiedb, tumblr, Twitter, and other websites worldwide. This has been amazing so far, and we hope you stay with us on the road ahead. 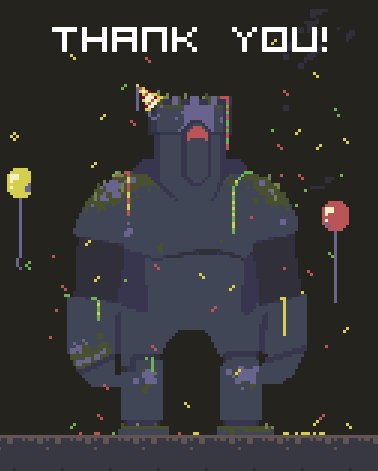 As we said at one point, online multiplayer would require revamping of the entire game from the grounds-up :(

The closest we would have is co-op multiplayer on one computer, using two gamepads/gamepad and a keyboard

That's too bad, it would be an awesome game if it had multiplayer between steam.
Maybe RoR 2?

Well, in this case, try to do it up to 4 players, there is a lot of people with big screens and lots of Gamepads :) (i'm one of them)

So 0.29.2.2 IS the demo, or there will be one last free/public release that is the demo? Cause I'm playing 0.29.2.2 and I don't think I have unlockables (or I haven't unlocked anything in more then 5 hours of playtime...).
Anyway, can't wait to see the final version!

You definitely got a kickstarter supporter! Can't wait to see this game grow up into something great!