Public alpha version 0.7.0 has been released and the price for full version has been cut by 40%! Direct downloads are available for Windows and Linux and the release has been uploaded to Desura.

The previous 0.6.0 release didn't go as smoothly as it should. Quite a few Windows users had problems with game starting up. Most issues were already resolved in 0.6.1 quick fix release, but the bug squashing continues in this release.

In future please report problems and bugs to support forums where they are much easier for others to find than in comments on news posts or downloads.

This is mostly a bug fix release and it's a little light on new features. The most notable change is that all configuration, user-created levels and logs are now stored in OS user directory. This allows the game to be installed in read-only location (e.g. system directory) and keeps the user data safe during updates.

Note: Be sure to backup any levels you have created before upgrading to this version through Desura. After the upgrade you can just copy the level files into levels -directory in user data directory (see readme.txt for details) and they will be safe in future upgrades. 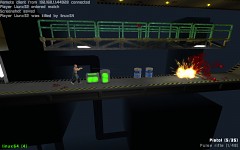 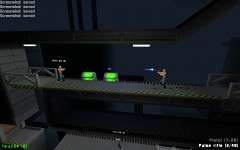 I have to agree with people saying that 5.99 EUR is quite steep price for an unfinished game. That's why I decided to cut the price while the game is in alpha stage. The Platform Shooter is now available at 40% discount off the final version price! The discount applies to both product keys for direct downloads and purchases on Desura.