Three weeks, two game conferences and and a nerd fest. Okhlos was in each one of them in one way or another, here is how it went.

Posted by SebastianGioseffi on Nov 5th, 2013

For the last three weeks we have been "on the road" with Okhlos, doing a little show and tell / playstesting session at a local nerd fest known as Toronjapalooza, giving a talk about the history of CoffeePoweredMachine and independent game development at Buenos Aires' largest tech exposition, Tecnópolis, and finally some more playtesting at the EVA 2013 (Argentina's Videogames Expo). They have been extremely busy and tiresome days but also very fun and exciting. And they were also the first time we showed Okhlos outside our offices. And we learned a lot.

The first day at Toronjapalooza not many people played the game but most of the ones who did were kids. The youngest one was a four-year-old and the oldest ones were around twelve. We have designed Okhlos as a game that we (basically hardcore gamers with two or three decades of gaming on our backs) would like to play, and we never thought about how someone so young would approach the game, so those were uncharted territories. In addition to this the test level we had put together was ludicrously difficult to beat (mostly my fault, I tend to do that, sorry) so I was fearing an epic disaster. It wasn't. Instead what happened was that the kids started playing the game in a different way that we had anticipated. The youngest one took to exploring, ignoring all the enemies, the hazards, just walking through the map, focusing on going through obstacles and asking the names of the trees (we had a larch). Others started a small competition to see who could get the largest mob. And one of them not only managed to complete the whole level, but when he found out that that was the only level we had made so far, he went on and finished the level again, beating Apollo's godly ass a second time. 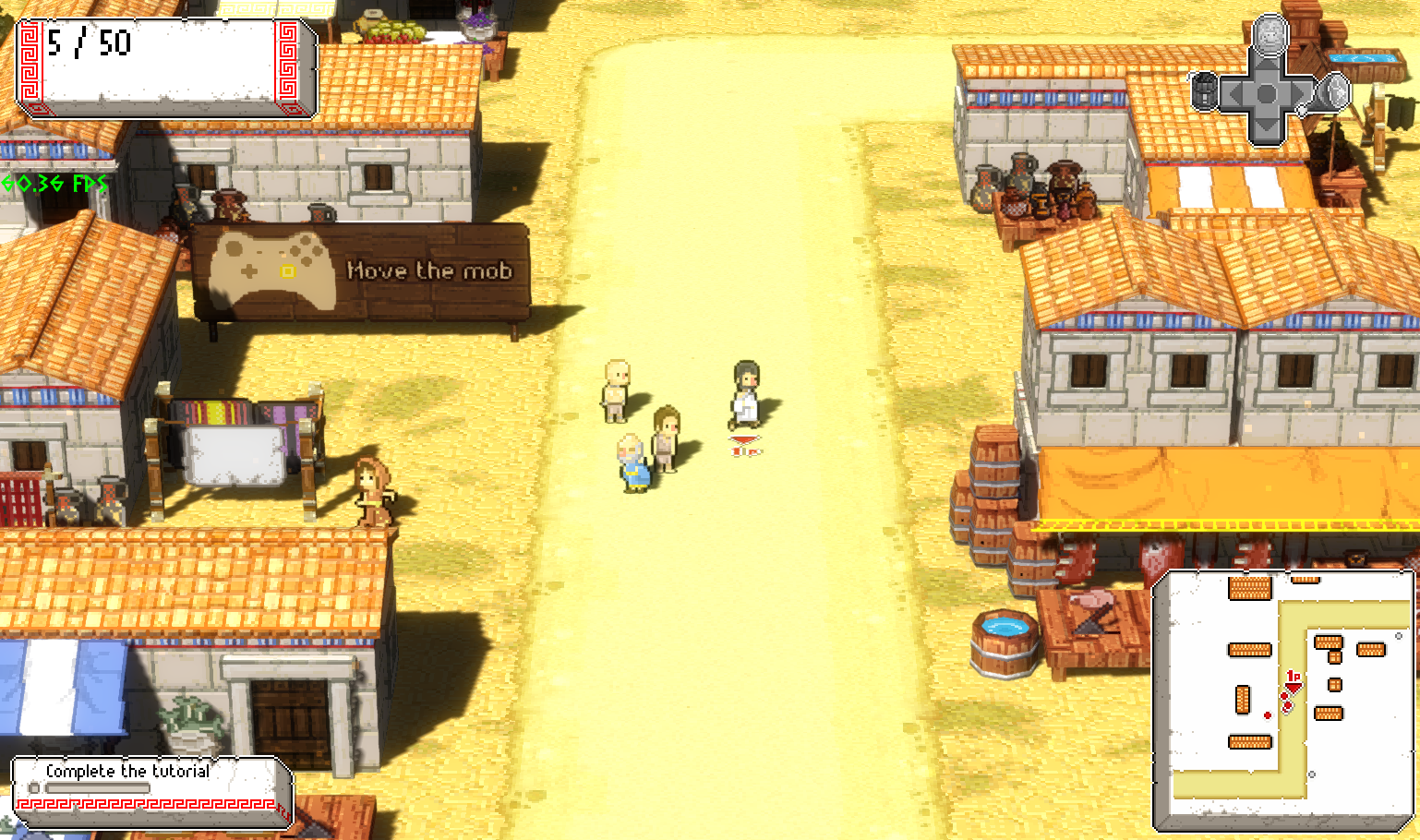 (Click to enlarge the picture. We put this sentence in every picture you can enlarge and still you dont get it? If it has a little hand, it's clickeable!)

The second stop in our tour was Tecnópolis, where we presented a talk entitled something like Making Games for your Boss, for the Audience or for Yourself: the History of CoffeePoweredMachine. I say we, but It was actually Roque who gave the talk (I just sat the there with José Luis while Roque spoke and cheered him on). But we did spent quite some time working on the content of the talk, trying to put down into words (and slides) what we have learned the past few years working on our jobs in the industry, on our previous game Gravity Fleet and now on our beloved Okhlos. The talk may not have the greatest talk ever but it was a first experience and good one at that. It was also a chance to show a little of the game to more people and we even got actual people asking actual questions after the talk! In case you really want to know how the talk went out, it's up on YouTube. And it has ENGLISH SUBTITLES! Spanish subtitles also, but I think you don't care about that:

Another great thing about that week was the conference that took place during that time. On the main stage there were speakers like Zach Gage, Nathan Vella, Ron Carmel and Tim Schaffer and we had a chance to chat with them, to tell them what we were doing, asking their advice and simply hanging around these cool people. It was amazing.This photo is from the party that took place the friday after the talks: Twitter.com 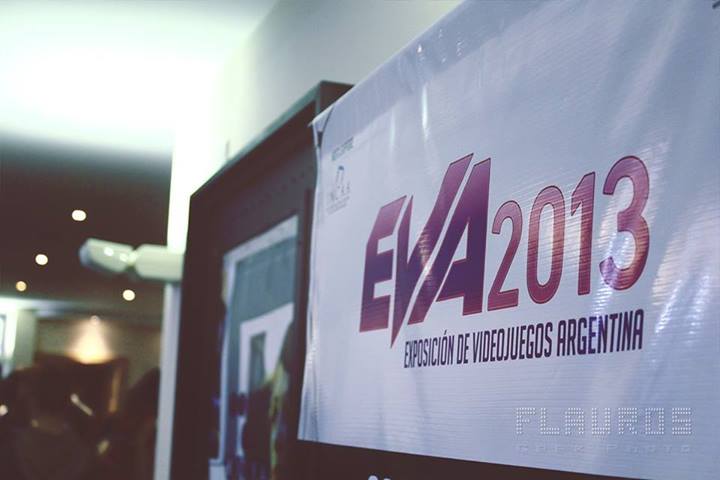 And after that came the EVA, were we sat down with a notebook and a controller and showed the game to the people around, which was mostly fellow game developers and hardcore gamers. Everyone we met was very enthusiastic and we got quite a lot feedback from just a couple of hours of playtesting. The feedback was very useful, especially since it came mostly from people with game development experience and knew how to pinpoint specific issues, but at the same time we approached the playtesting with something that Ron Carmel had remarked in the talk he had given last week. We focused on how people played the game, on why did they do some things differently from what we would do. Why they would see things about the game in a different way than us. Sometimes the feedback they gave us shed some light on this, sometimes it was about completely different things, but we tried to keep our focus on that. 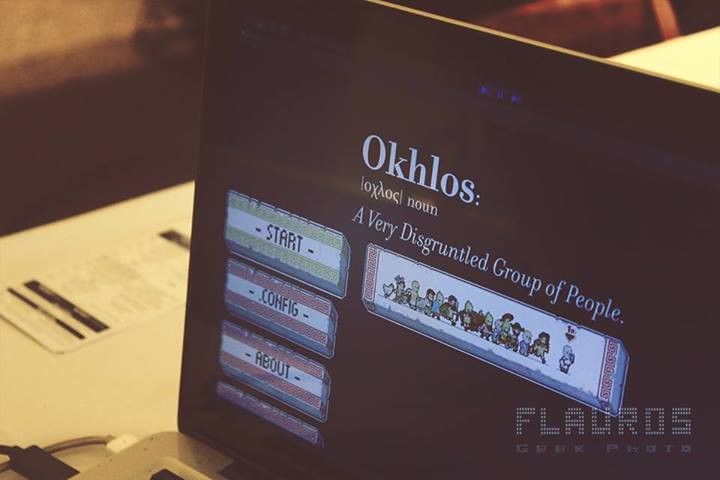 (Yet another awesome photo by Flauros Geek Photo)

One thing I discovered that was pretty interesting in this regard was seeing how a person who has just played the explains the game to another. Let's say Joe sits down a plays for a while until Lady Marie Von Teslette comes around, then Joe tries to tell her what the game is about and how you play it. I realized that paying attention to what Joe says is a good way to see which things made the most impact on him, which things seemed more important to him. In addition to that Lady Marie Von Teslette gets to approach the game in yet a different way, that is not either Roque or me trying almost desperately (and almost futilely) to tell her how awesome, interesting and special the game is, nor is it just the game on in itself. It is a bit closer to having a friend tell you about a game or reading something in a blog, which how most people end up coming into contact with a game.

And lastly, another thing I realized these last weeks, perhaps the most important thing, is that it's great to watch people play your game, have fun, get excited about it. It makes it all worthwhile.