Nuggets are certainly the most fragile and whacky creatures on Mother Planet. They’re awfully similar to humans, in regards to their dominance over the natural world, but apparent inability to preserve the planet or themselves.

Nuggets are certainly the most fragile and whacky creatures on Mother Planet. They’re awfully similar to humans, in regards to their dominance over the natural world, but apparent inability to preserve the planet or themselves. They’re not a very clever or logical bunch, despite whatever amazing gadgets they come up with. That’s why you’re here. Without your guidance, they can be somewhat of a loose cannon. However, thanks to our latest (and upcoming) updates, they will require far less micromanagement than before! Now you can focus on other, more interesting godly duties, instead of the usual babysitting.

In our next few updates, we’ll be introducing those major Nugget AI improvements we’ve been threatening those simpletons with since last month. We’ll finally put that large cranial cavity of theirs to better use. As you know, we want to make Nuggets as self-sustaining as possible. Right now, you have a few tools that allow you to control them directly by changing their priorities. The reason we initially incorporated these tools was because the AI was simply not advanced enough to make its own decisions. Let’s all pretend that it was due to the low intelligence associated with the Stone Age population, though. Agreed?

We already have a more advanced AI system in testing that ensures you will have to do far fewer boring tasks. In today's update, we’re going to cover what you can expect to see in the upcoming patches. Please keep in mind that this is quite a challenging process and we’ll be needing your feedback and bug reports on our forums here.

The primary focus at this moment is to ensure that the most menial of tasks are automated, which implies an AI overhaul for resource collection, construction, job assignment, and reproduction. From now on, the Nuggets will understand their needs better and act accordingly. Most of a Nugget’s day-to-day activities will have a weighting. This way, the Nuggets will be able to prioritize their actions. For example, food collection is more important than wood collection. We’ll also be teaching them a few fundamental points about logic, such as ‘collecting food may not be all that important if your stashes are all filled to the brim!’

NOTE: All data are presented below is subject to change and acts as a placeholder at this time. Please feel free to leave feedback.

Up until now, the Priority Panel has been the primary way in which to engage with the Nuggets and assign jobs. The update will ensure that available Nuggets on the planet will be assigned to tasks by the system without players needing to explicitly assign them. When a player places a building on the planet, the Nuggets will automatically prioritize that building for construction and take on the necessary roles to get that job done.

After researching the Stash building type, a player will be able to build Stashes for each resource type. Nuggets will try to fill a stash when they’re out of tasks to perform.

After researching the Distribution Center, a player will be able to place a building that will manage resources saved in stashes. Any Nugget assigned to a Distribution Center will take on the role of the Courier. Due to their higher carrying capacity and a slightly faster travel speed; Couriers will take on the job of delivering resources for under-construction building, while the regular Nuggets (Laborers) will work on constructing the building. If there are not enough resources in the stash/storage, or if there simply are no Couriers, Nuggets that were chosen for construction duty will instead begin collecting resources for themselves.

Players can place as many Blueprints as they want, since we are removing the need to reserve resources for constructions.

A maximum of 3 Nuggets can work on one building at a time. If you have more than 3 Nuggets available to start construction, Nugget number 4 will be assigned to the next building in the queue.

Every Nugget needs a hut in which to live. A male Nugget’s main priority when they reach adulthood is to build a hut for their family. Sure, females could do this too, but they’re clever enough to let the men have their macho moment and live out their DIY fantasies. The system will prioritize this task over any other non-vital tasks. Nuggets rest and mate in their own huts. This means that if there isn’t a hut assigned to a family, the Nuggets can die from cold temperatures or pass out where they are standing when they’re tired.

Constructor’s Huts essentially supply tools to Nuggets (turning them into ‘Engineers’). When a Nugget is assigned (by the player, or automatically) to the Constructor’s Hut, they gain tools which increase their construction ‘strength’, allowing them to build faster. Nuggets can build without the constructor hut tools, but they will not have the advantage of the greater building ‘strength’ and will thus work much slower.

Players can control how many resources they want by placing storage area/warehouses around the Epicenter. When idle Nuggets see storage areas with available capacity for additional resources, they will try to keep them full.

When a Nugget who is currently constructing a building loses their stamina and decides to go rest, another Nugget can take their place. Instead of continuing to chop trees, or whatever their less-critical task was, they will be assigned by the system to the building that just lost a worker.

Pro Nuggets are educated Nuggets, such as scientists, engineers, astronomers, and etc. Any regular Nugget can become a Pro Nugget. Schools are where regular Nuggets get their education and profession. The player can inspire Nuggets to go to School, or Nuggets will go to school themselves if there is demand from Key Buildings.

This system will lower the amount of micromanagement that will come with having more than 20 Nuggets on the planet. Players will no longer need to worry about assigning or reassigning Nuggets to do certain tasks. Our goal is to make it flow naturally.

Food: If the Epicenter’s food supply is at low level, the Nuggets will prioritize gathering food over anything else. Each Nugget will also exhibit different symptoms when starvation sets in, which is dependent on their stats.

HIGH PRIORITY Repair. If there are Buildings in a Weak or Bad condition Nuggets will repair them.

MEDIUM PRIORITY
Construction: If there are blueprints placed around the Epicenter, Nuggets will try to build it before performing any tasks in Lower Priority.

LOW PRIORITY
Resource Collection: If there is enough capacity to save extra resources, Nuggets will collect them and store them in the Stash/ appropriate storage area.

The laborer is the basic Nugget Class. Each Nugget starts as a Laborer until the system assigns them to another, more important task. Laborers can participate in the Key Building construction process. If there are available Engineers, Laborers will be occupied with a different task.

Duties: Faster resource delivery from point A to point B 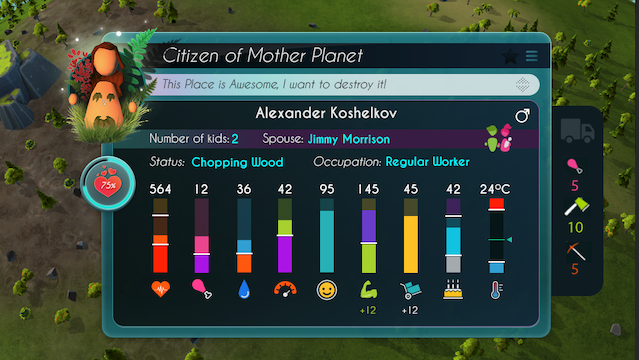 Nuggets go eat after their Hunger reaches a certain level. There are a few Hunger levels that affect a Nugget’s decision and tasks. Some key buildings can slow hunger depletion - ie: Cooked food is more filling than raw food.

Similar to food, the Nuggets will leave to drink water from wells when their Thirst hits a certain level. Some key buildings can slow thirst depletion.

Stamina decreases faster when the Nuggets are assigned to tasks. When Nuggets are idle, Stamina depletes much slower. Stamina can recover by resting in residential buildings (ie: huts). Stamina can also be recovered at a faster rate in Key Buildings such as Community Bath.

Happiness decreases at a slower rate than other needs. It is harder to recover if it’s lost in large chunks. Happiness is a little different from other needs, since it can be affected by events, such as a death in the family, bad pollution levels, or the Creator’s actions.

Keep in mind that this is all still a work in progress. We decided to share our vision with you early to get your feedback and suggestions. Please leave a comment below, or join the conversation on our forums. Also, feel free to share this with your friends and see what they have to say about it. Your opinion and feedback is extremely important, and we would like to thank you all for being so proactive and helpful. You’re shaping The Universim for the better.

How is combat going to go down?