It's been a hectic few months and a lot's been going down - here's the latest update with She Dreams Elsewhere, including past and recent events, latest press coverage (including The New York Times!), battle system and visual updates, and more!

Sup y’all! Long time, no see, yeah? My apologies for the relative silence, it’s been an insane past few months and I’ve yet to fully get myself fully caught up with everything, but I figured I’d update ya on what’s been going on. So what’s new?

Well, I’ve been doing a lot of traveling and showing off lately, and to be frank, ya boi is exhausted from all of it. There’s also been a metric ton of press and positive coverage in the past few months; so before I go onto the new stuff, I just wanna do a quick recap: 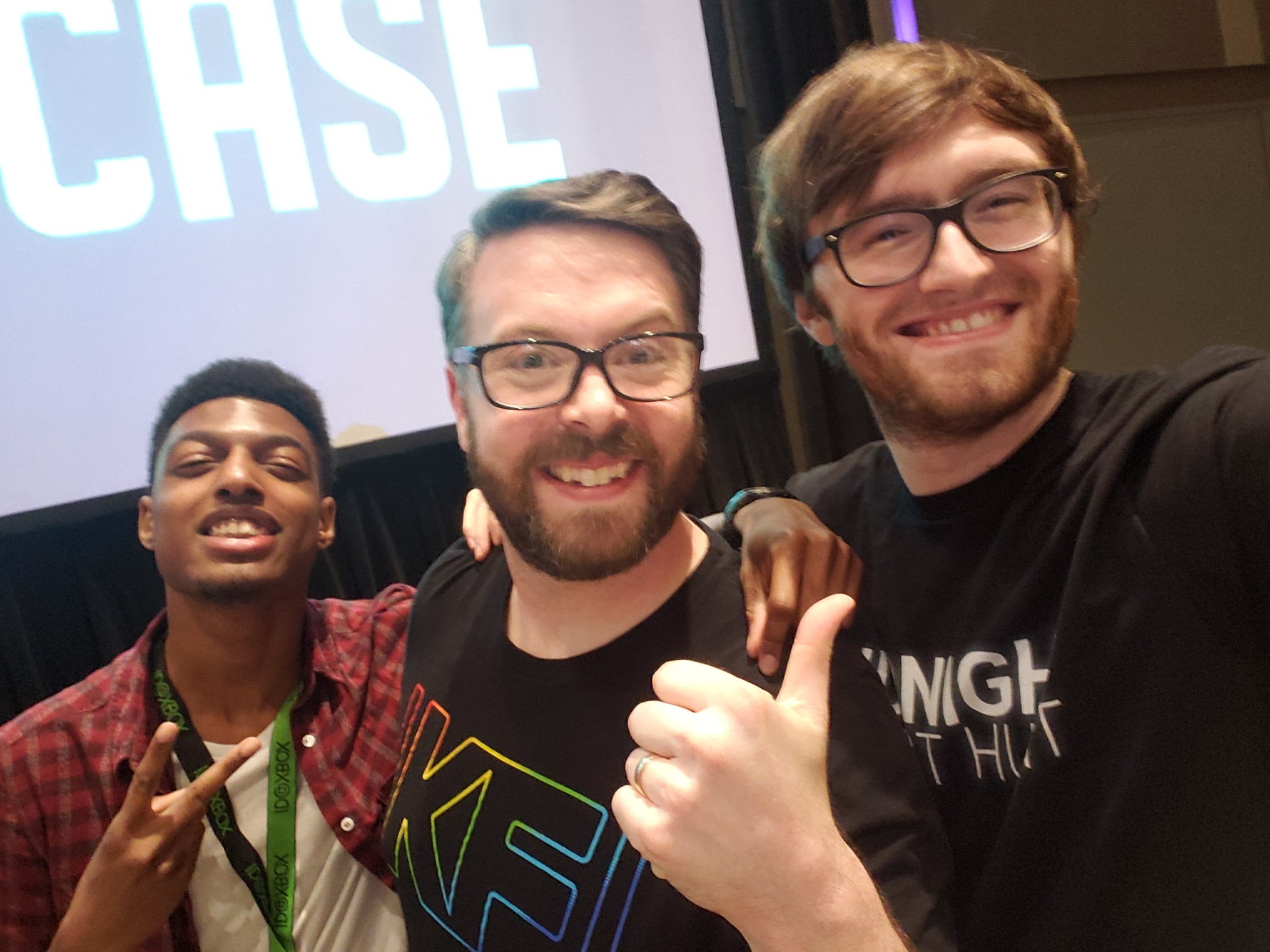 Much love to all the amazing developers, press, gamers, and new friends that I’ve met at all these events! I really can’t gush enough about how great it was to connect with all of you; it’s always such a fun time and a huge morale boost, so thank you for all the love and support. With that being said, it’s really weird and discomforting getting all this attention… Don’t get me wrong, I’m really appreciative of all of it and I’ve had a blast, but at the same time… this game isn’t even out yet, y’know? I’ve barely shown off the actual fuck shit I’ve got in store, and to have this many eyes on me regardless? It’s unreal, and honestly I’ve been feeling really down because of it lately. I dunno, I feel like I should be happier, but I feel more pressured and stressed than ever to actually deliver on everyone’s expectations. I suppose the best I can do is just keep my head down and continue doing what I’ve been doing, but that pesky little voice in the back of my head never goes away, y’know?

Imposter syndrome. Ya love to see it. Anyway, so how’s the actual game coming along?

As many of you know (or could clearly guess), the game won’t be making its previously announced 2019 release date. It just needs a bit more time in the oven for a variety of different reasons, including actual development, porting, marketing, yada yada… The good news is that I have an actual release date settled and that development has been progressing well, so please look forward to playing the full game in 2020! I promise y’all it’ll be worth the wait.

In the meantime, I’ve started a new Discord channel for the game, so come on in and hang out with us! It’s meant to be a chill spot for casual conversation, updates on the game and opportunities to test out the battle system! I know a lot of people have way too many Discord channels (myself included, like lmao who are you people.png), so it’s totally cool to join and forget if you’d like - I’ll only ping you for the really big announcements, promise.

With that being said, it has been kinda weird lately. Despite a lot of great and exciting opportunities coming up, I’ve had remarkably little time to work on the game itself in the past few weeks. Most of October was spent organizing, analyzing, and doing a bunch of actual “business-y” housekeeping that needed to be done. “But why now?”, you might be asking yourself. Well… due to a very exciting partnership that’s come about, I basically needed to get my shit together to make sure all my ducks were in a row before it could be fully executed. But now everything’s nice and tidy, so expect to hear about said partnership soon!

Keeping on with the whole “business” theme, I’m very excited (and scared) to announce that I’ll be officially self-publishing She Dreams Elsewhere. I’m sure that sounds pretty obvious, seeing that I haven’t really said anything about publishers online or in-person, but truth be told, it’s something that I’ve been going back and forth on for the past few months. I’ve had several offers and seriously considered it, but in the end, I decided that I could keep trucking on solo and be just fine… especially when I did things myself that I said I needed a publisher for. It’s funny how life works out that way, no? Many thanks to all my friends and fellow developers who have given me advice on this; it certainly wasn’t an easy decision to make. It’ll be a bit more challenging keeping it solo, sure, but I’m confident with how things will turn out in the end, especially with all the help I’ve gotten now and in the future. Plus, I’ve always been a more “do-it-yourself” type of person, so it just felt natural, y’know?

With most of the business headaches out of the way, the next few months will be focused fully on continuing development. I’m really happy with how things are turning out, as things are truly starting to settle in. Story-wise, I finally did the thing I really should’ve done a long time ago, which was to send out the full outline to other people to get feedback before playtesting whole levels. (Developer protip: Don’t be an idiot like me - do this as soon as possible. The joys of solo dev, amirite?) It’s still pretty rough and it’s got a bunch of kinks to work out, but so far it’s been getting really positive feedback, and I’m excited to have it in players’ hands as soon as possible.

I gotta say, writing for video games is tough. (Surprise!) Writing dialogue itself is much more natural for me, but when it comes to structure and figuring out the little details of a story, I tend to get hung up on those. It’s definitely an intense process, and some days are easier and more productive than others, to say the least. It doesn’t help that I started development of the game after writing/directing two (shitty) feature films, which require two very different writing processes.

To put it simply, when you’re writing (and ESPECIALLY editing) a film, you can see the story right in front of you. Even without stuff like sound, color grading, visual effects, etc, the movie is essentially there. But with games, when so much of the experience relies on how the game actually feels - the mechanics, sound, aesthetics, controls - and those elements aren’t complete yet? It’s hard to get a grip on things, especially with a game of this size and only me and my lonesome developing it. I also have a hard time showing off unfinished writing, so that was another personal roadblock. Call it perfectionism, call it cowardly… either way, I’m glad I’ve got more eyes on the full story, even if it isn’t how the actual experience will be… well, experienced. 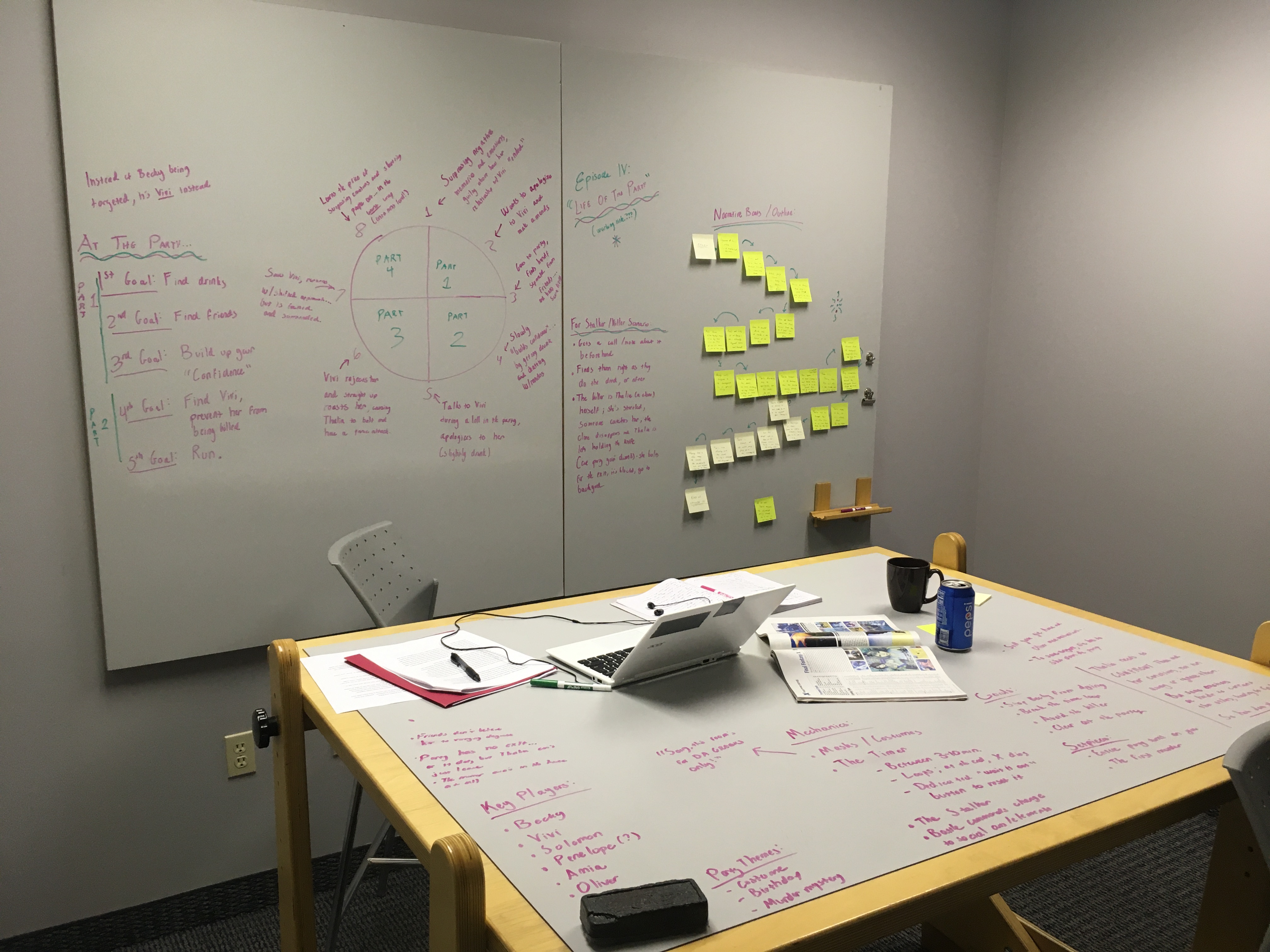 I’ve also been doing some playing around with the battle system. Previously, enemies needed to have their weakness hit twice to be stunned for a turn, but to be honest, I never really liked how it felt, especially in the later hours of the game. I’m experimenting to have it function a bit more like Octopath Traveler, where instead of two hits, it simply varies per enemy, with the baseline being one hit, and bosses and stronger enemies naturally needing more. There’s also multiple ways to hit an enemy’s weakness too, such as using character’s weapons, similar to the Fire Emblem series.

With that being said, the game’s still a bit too easy for my liking. I’m not intending it to kick the player’s ass constantly, but as it stands now, it’s too much of a cakewalk if you really know what you’re doing. Part of the problem is that the player simply has too much power, with not enough counters for the enemies to use against you besides dealing a buttload of damage. The “Charm” system does allow for some opportunities like that, though. I’ll do a more in-depth post about how it works another time, but essentially Charms allow you to equip new skills and passive abilities on a party member, including elemental affinities. (If you’ve played them, they’re a bit similar to how “Abilities” in Kingdom Hearts and “Badges” in Paper Mario work) With those elemental charms, they allow you to add and boost a skillset of a certain element… while also making you weak (and therefore, able to be stunned) by the opposite element. 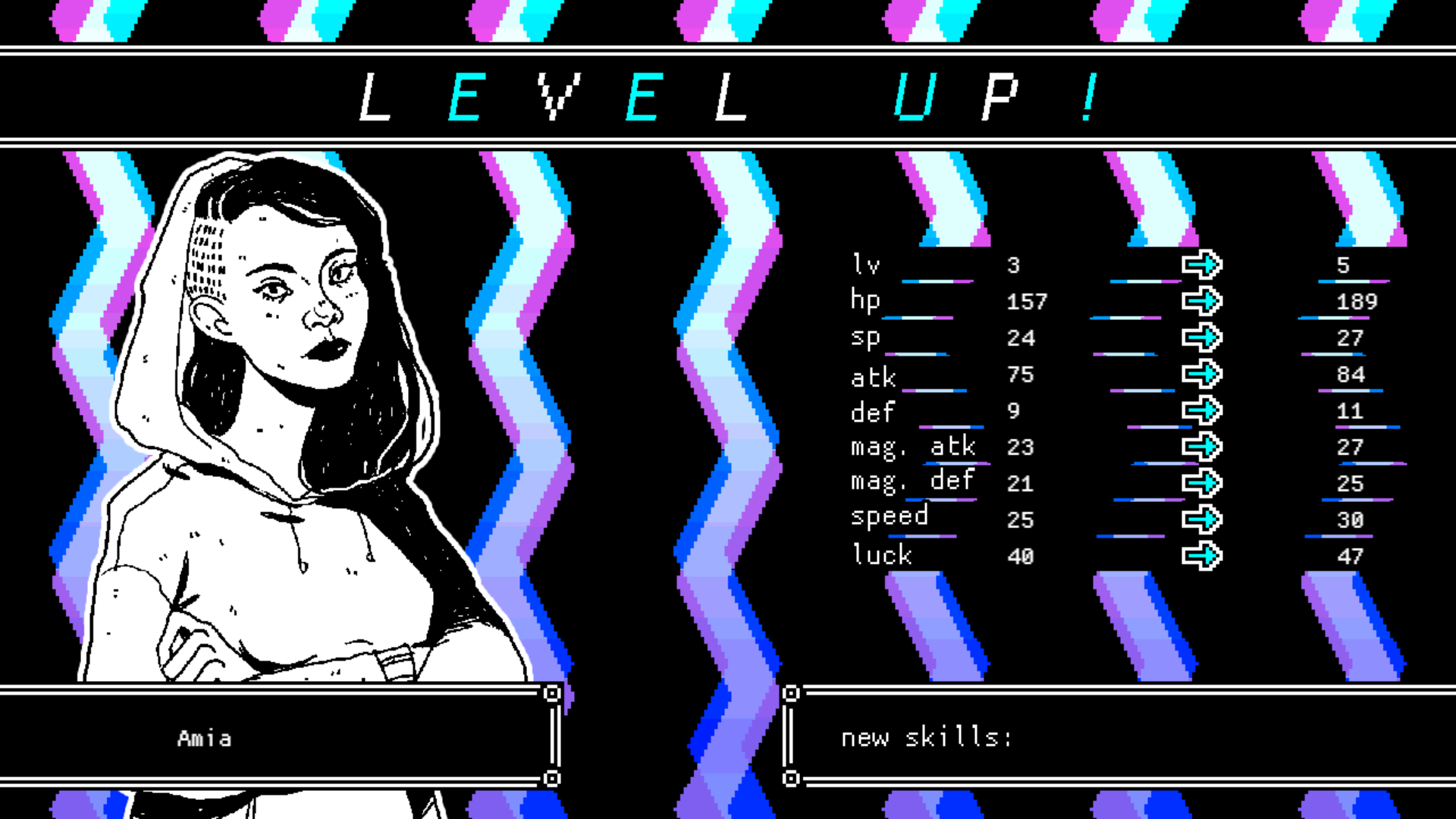 I’m still playing around with it, so I’ll keep you guys updated on how it all works. One of my other tasks for this month is to reduce the damage numbers all around so that it’s a bit easier to read at first sight (ex. Starting out with 30 HP as opposed to 150, Link Attacks doing 100 HP of damage instead of in the thousands, etc.) I plan on putting out a whole video showcasing the battle mechanics in the near future, so be on the lookout for that. In the meantime, if you have any suggestions or questions, feel free to shoot em my way.

I’ve also done some visual enhancements, making things more energetic as well as visually stimulating. Limit Attacks (most likely to be renamed) now have anime-like cut-in animations, critical hits have a bit of chromatic aberration to really sell the effect, defending now comes with a wave-like effect if you’re attacked, and HUD elements overall have had some touchups done for improved consistency. I’m really pleased with the result so far, and seeing it on crisp 4K monitors is just beautiful.

These visual improvements, as well as the “one weakness hit” change, will all be playable at Xbox’s X019 event in London, England this weekend! I won’t be there in person, but if you’re attending, definitely do stop by and enjoy yourselves. (And take pics too!) There’s also going to be a special announcement during the event, so be on the lookout for that - I’ll share the news on my end here as well.

The game is also playable during this week’s MIX Brasil Festival of Diversity from Nov. 13 to the 20th, so to all my Brazillian fans, much love to you all and I hope you enjoy! There’s many more exciting showcases coming up, each one having something brand new to share, so please stay tuned for those announcements. 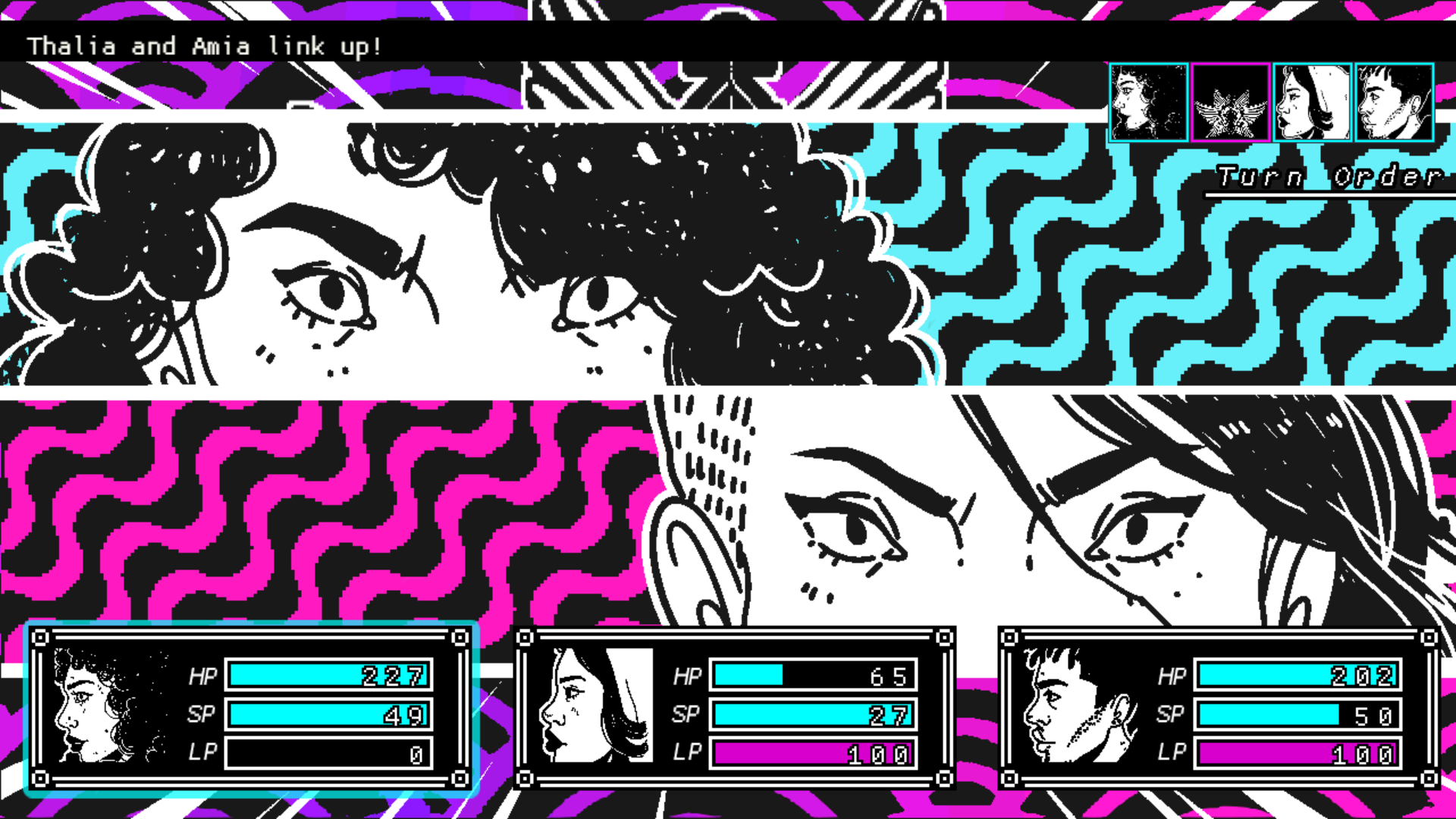 Well, that about wraps up this update! The one-year anniversary of the original demo release is coming up, so I plan on putting out a post-mortem of its results, seeing how there’s the constant debate of “are demos still effective” and whatnot. As the decade comes to a close, I’ve also realized I’m coming up on a full ten years of being involved in game dev… jeez, where did the time go? Got some nostalgic stuffed planned for that as well, so y’know… prepare to reminiscence/cringe a bit. (Also, it’s my birthday at the very end of this month. Just, y’know, FYI. Call me Taylor cause I’ll be feeling 22, boiiiiiii)

Before I go, just wanted to do the usual roundup of “Things Davionne Has Played and/or Watched That He Wants to Shout Into the Void About”:

Anyway, that’ll be it for now! I’ll be back later this week with the whole X019 announcement thingy, plus more exciting news in the weeks to come. In the meantime, be sure to follow She Dreams Elsewhere via social media (Twitter, Instagram, YouTube and Discord) and if you haven’t already, be sure to give it a lil’ wishlist on Steam. Helps out a lot, y’know?