Post news RSS The Next Evolution of Our Dialogue System

Our next demo will showcase the last iteration of our dialogue system. There have been significant changes made to it since our previous build.

My name is Tyler, and I’m the story writer for Luckless Seven. I wrote the story and dialogue for the demo we released with our Kickstarter in June 2015, and I became a permanent fixture on the Deckpoint Studio team in August. I’m responsible for constructing the Luckless Seven story, which importantly includes writing all of the dialogue and dialogue choices.

Before accepting my position on the Deckpoint Studio team, I studied English at the Ohio State University. Though my English coursework covered extensive territory, I concluded my studies with an undergraduate thesis on video game narratives and rhetoric, which united my formal education in English studies with my passion for video games.

When I began working on the game in June, the Luckless Seven dialogue system offered players choices fitting into five categories: Control, Dismissive, Empathetic, Intimidate, and Charming. Over the course of the game, the player’s choices would be tracked, and, ultimately, dialogue choices in each category would have point thresholds that meant that players could only select options in the categories they had heavily invested in. 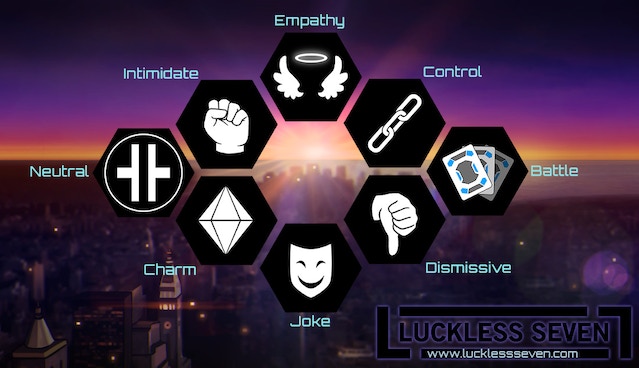 The multiple categories of our original dialogue system

When I was working on the story and dialogue for the Kickstarter demo, I ran into a number of problems with this system. As someone with a Bachelor’s degree in English, I objected to the grammatical inconsistency of the system. (Seriously, are we using nouns, adjectives, or verbs for these categories? Let’s be consistent!) But this was a surface-level problem.

An emotional dialogue scene from the Luckless Seven Kickstarter Demo

A mock-up of a player's potential choice distribution

But the most serious problems with the established system arose when we asked ourselves two questions. First, what was the outcome of the player’s participation in our dialogue choice system? Because our system rewarded investing into only one or two personality types, all of the player’s choices culminated in fewer options later on in the game. Second, what are we trying to incentivize with this system that intends to act as the player’s interaction with a realistic coming-of-age story? Rewarding the player for primarily choosing one or two categories was, in story terms, incentivizing the creation of a one-dimensional Mark.

In our original system, players might have chosen dialogue options that

rewarded their statistical goals over a more honest role-playing experience.

We decided that we didn’t like either of these answers. We didn’t think that choices should lead to fewer choices, and we wanted players to choose how Mark would approach situations on a case-by-case basis. If we were to fulfill our promise of “an interactive coming of age story for you to control,” we knew we would have to make changes.

So, I moved ahead with a plan to alter the system. I drafted and iterated on different ideas that would resolve the system’s grammatical inconsistency and emphasis on methods of persuasion. But, no matter which combination of five dialogue/personality categories I tried, I continued to run into the core issue: our system enforced a one-dimensional player character.

In response to this stubborn problem, we took decisive action: we removed the personality scoring system. Instead of the player’s dialogue choices being coded as one of five categories which accrued points and indicated the type of character the player had made out of Mark, we decided to work in a more open system. No more classifying Mark’s choices into a handful of set categories. No more reducing our protagonist to a one-dimensional character. 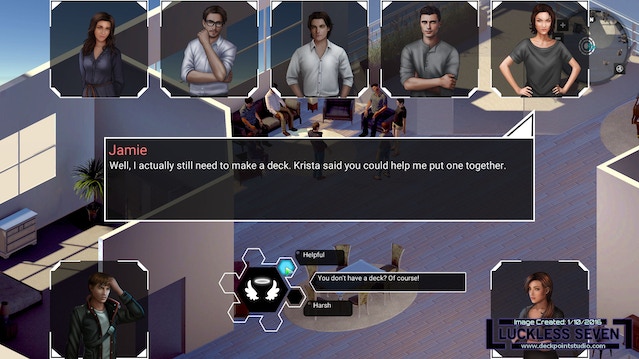 Our dialogue system reaches its full potential with the entire cast of Luckless Seven's main characters. 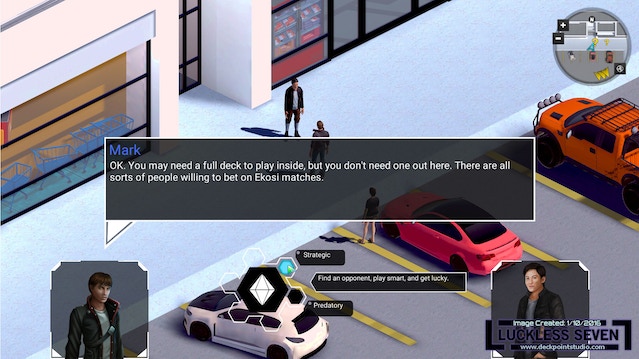 No longer are Mark's choices classified into five personality types.

Now, I’m working outside of those categories. Dialogue options are only restricted by the narrative situation and my creativity. We’re creating specific data points and checks to track and enforce consequences for decisions from the beginning to the end of Mark's journey.

The benefits of our decision to update the dialogue system are numerous. By allowing me to work outside of the restrictive five categories, I can make sure that all of our dialogue options are appropriate, natural responses to the scenario, rather than awkward categorizations meant to support the personality scoring system. This freedom has allowed me to focus on creating non-coded, difficult narrative situations. Now, players will be approached with multiple ethically-complicated choices where no one answer is the “right” one.

I hope I’ve made the problems of our prior system and the benefits of our decision to make a change clear. I look forward to bringing you an exciting, fun story filled with engaging and difficult choices, small and large.

Thank you for reading, and let us know what you think! Our experience at OGDE brought us a wealth of insightful feedback, and we’re always eager to receive more. Feel encouraged to leave your thoughts on Luckless Seven’s new dialogue system in a comment below!