Post news RSS The New Chapter: About Steam, Demo and Others - Roadwarden Devlog

As you may know, pretty much the entire development of the game, aside of music, was in my hands. Thankfully, the game now has a publisher. Assemble Entertainment has set up the game’s store page on Steam, including trailer, logo and other visuals. It saved me a lot of time, and I’m grateful that I can focus on preparing the game for its release.

Posted by MoralAnxietyStudio on Dec 9th, 2019

Roadwarden is an illustrated text-based RPG in which you explore and change a hostile, grim realm. It combines mechanics of RPGs, adventure games and Visual Novels, and since there’s a lot to talk about, let’s jump right into it.

1. You can now wishlist Roadwarden on Steam

As you may know, pretty much the entire development of the game, aside of music, was in my hands. Thankfully, the game now has a publisher. Assemble Entertainment (here you can get in touch with them) has set up the game’s store page on Steam, including trailer, logo and other visuals. It saved me a lot of time, and I’m grateful that I can focus on preparing the game for its release.

2. The new version of the demo for Windows, Linux and Macs is now ready 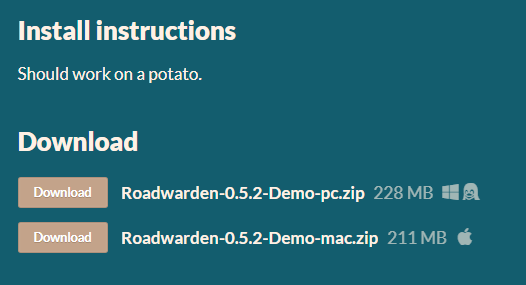 Here are some highlights of the introduced changes:

The demo can be downloaded from Itch.io.

Pleas note that the demo does not present everything that’s already prepared in the main game. There’s a whole bunch of new stuff to play around, but let’s keep it for the future release. : )

Oh, and Soundcloud is there as well! A couple of the game’s original tracks are already available, more will come later on! 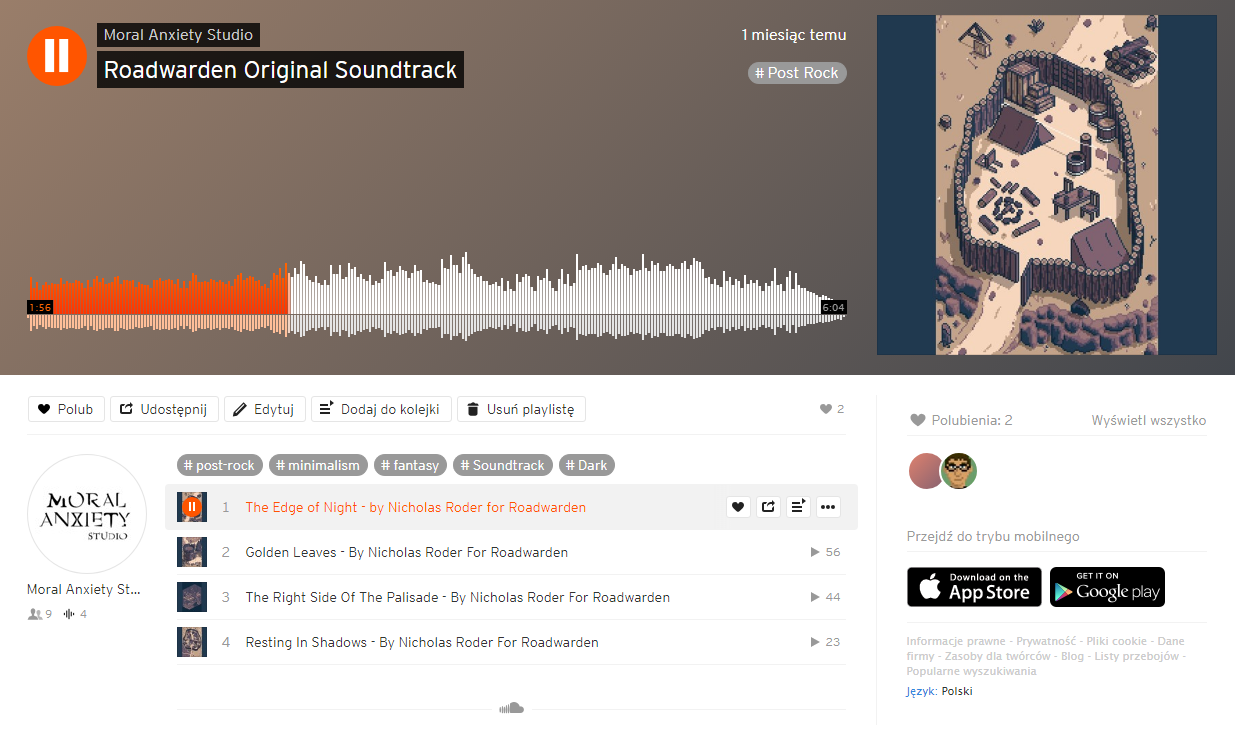 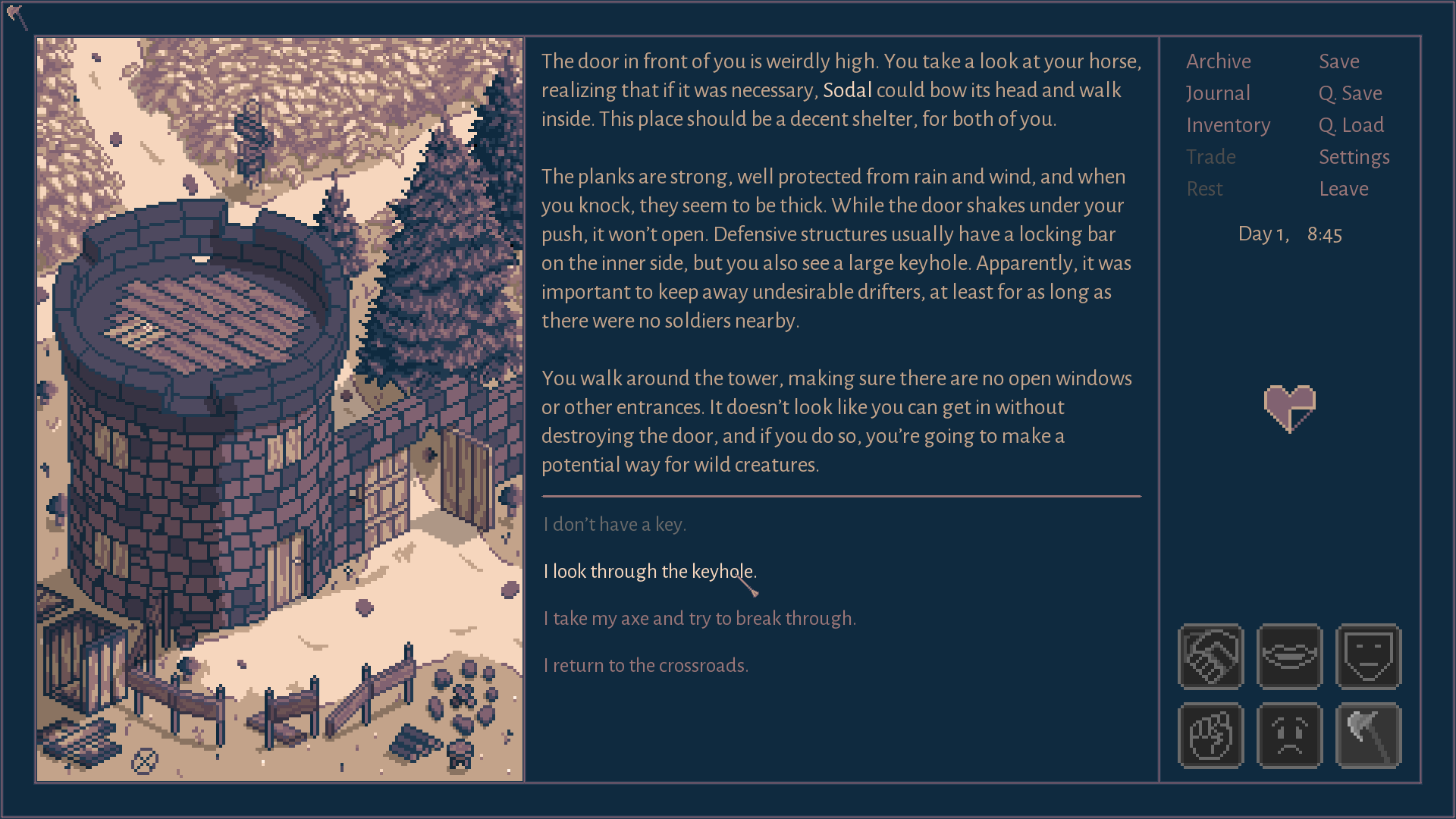 The narration and the player’s choices are now separated by a conveniently placed horizontal line. For me, it was always clear which text was which since they are in two different colors. However I’ve received a lot of opinions from very different people who barely see any difference between them.

One of those people has helped me realize that their color blindness is playing a significant role in this case, and it’s very important to me that every person who plays Roadwarden has a pleasant time. Having a convenient interface is a key to achieve that, so if any of you have an additional feedback, please go ahead. 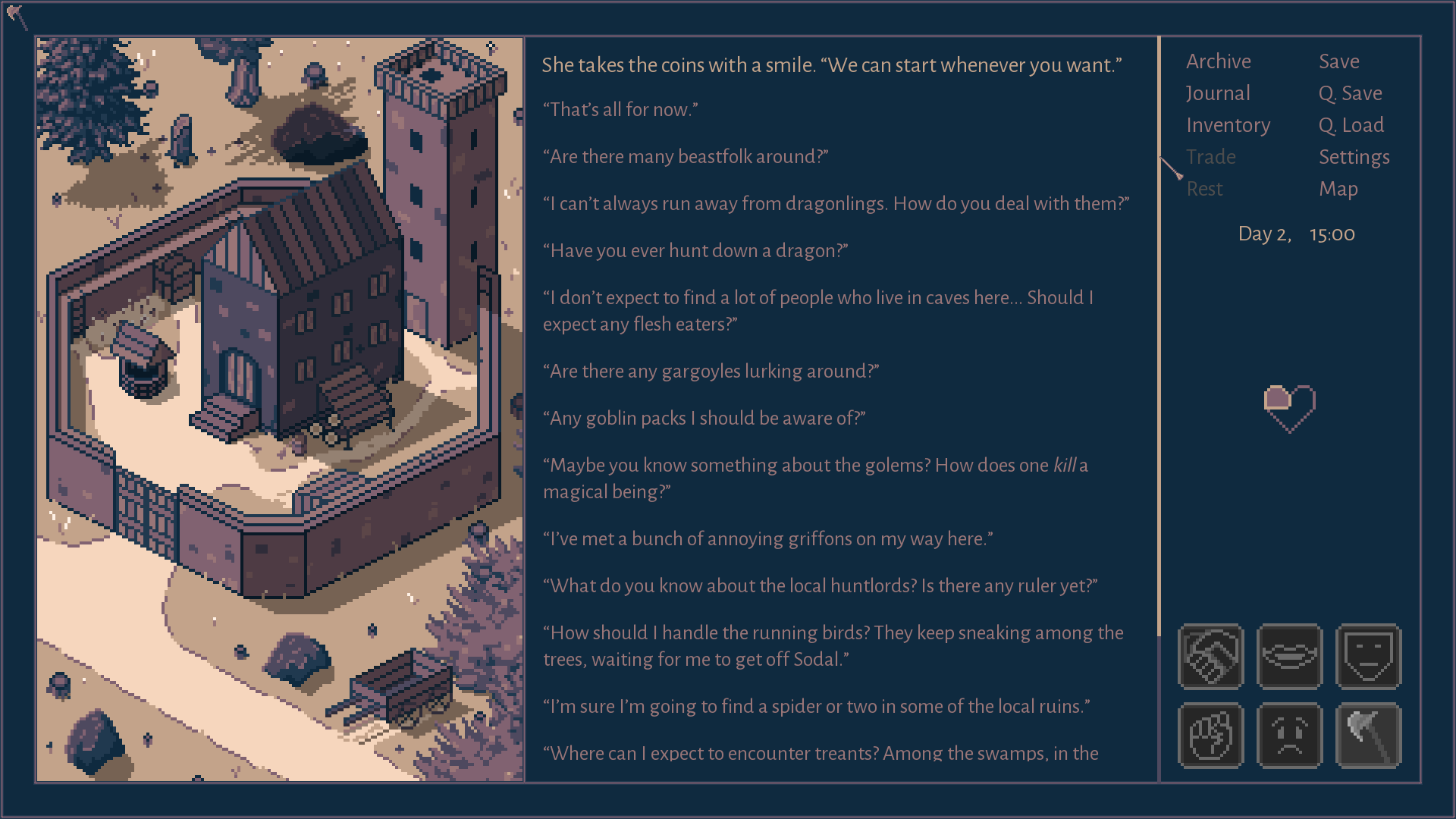 My plan was to avoid any sort of text scrolling to keep it “elegant”, but as the development went on, I’ve realized this limitation will sometimes get out of control, even making some of the content *less* interesting, not more. Also, having the scrolling option available will prevent some weird bugs in cases there’s more text than it should be.

There are only a couple of places where the scrolling is actually needed, let’s say... 1% of all the in-game text boxes. When the scrolling bar won’t be required, it won’t be seen at all, so I think it’s a great addition to the interface.

6. On the new inventory menu 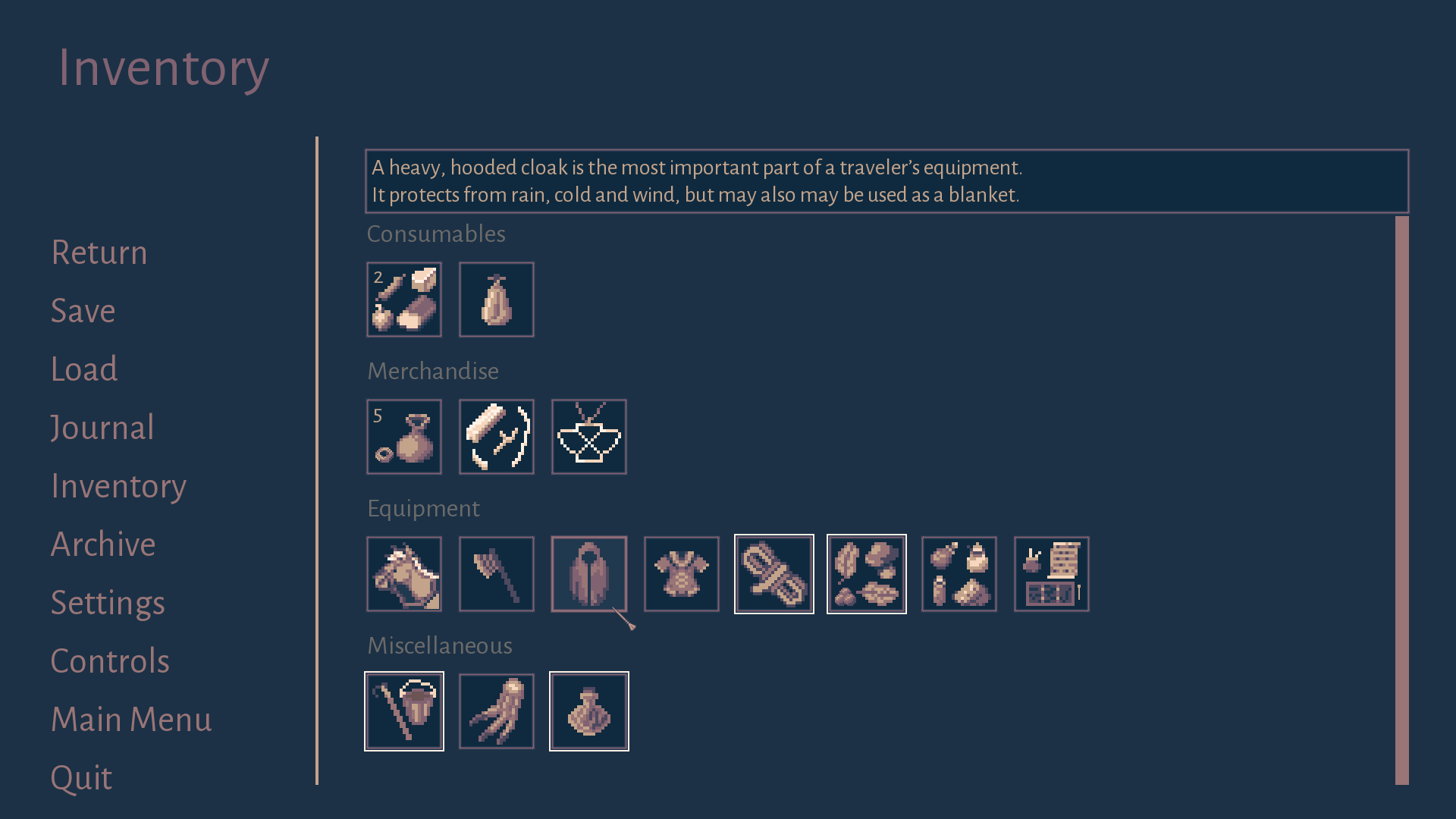 The inventory menu was completely redesigned. It looks better, it’s more responsive, and the new inventory “categories” make it less messy when you carry a whole bunch of items at once, you picker. 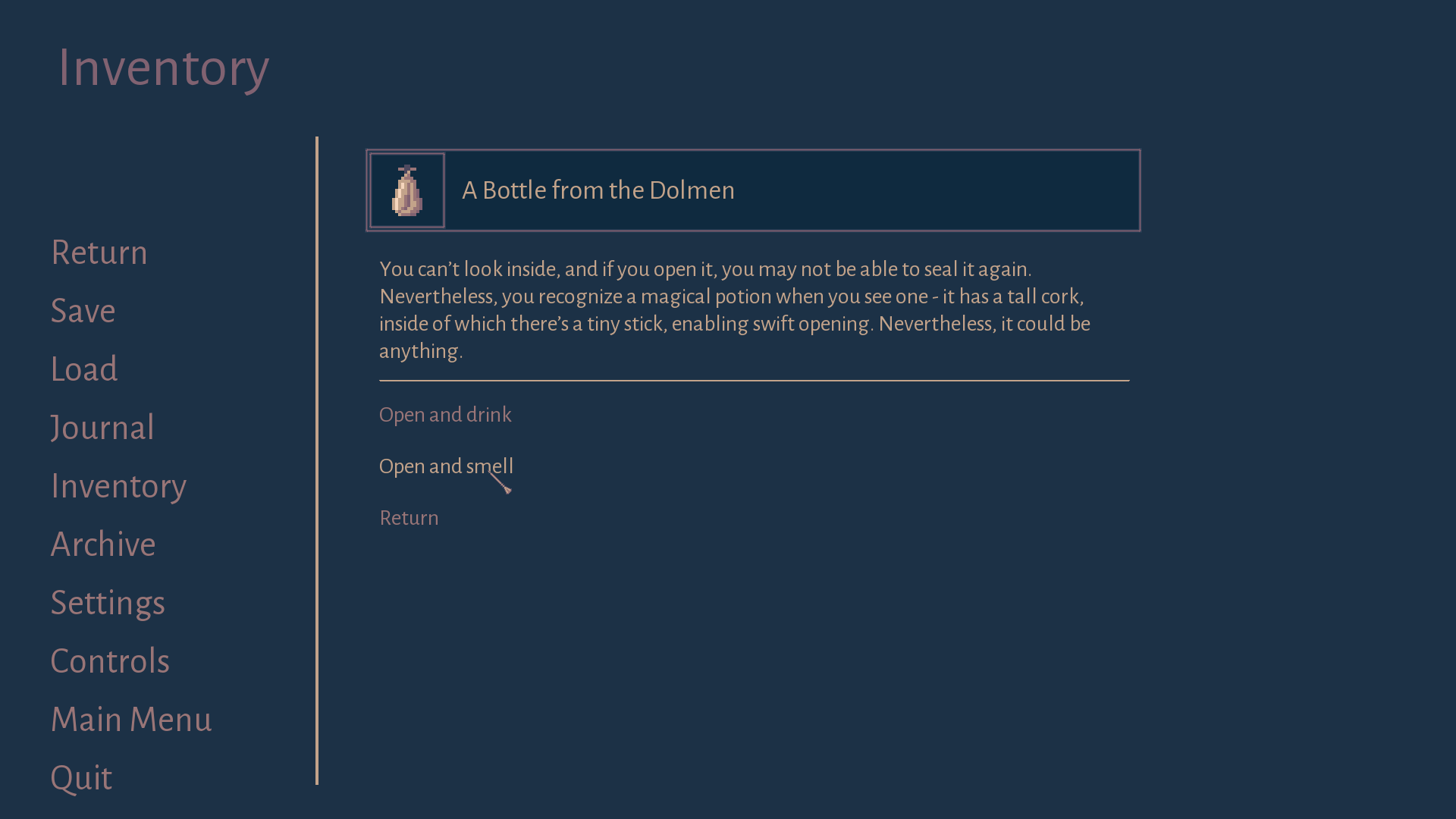 Thanks to this new setup, using items is much less messy, more consistent. Even if the equipment is temporary disabled (for example - in the middle of an action screen), the player can still read the item descriptions. 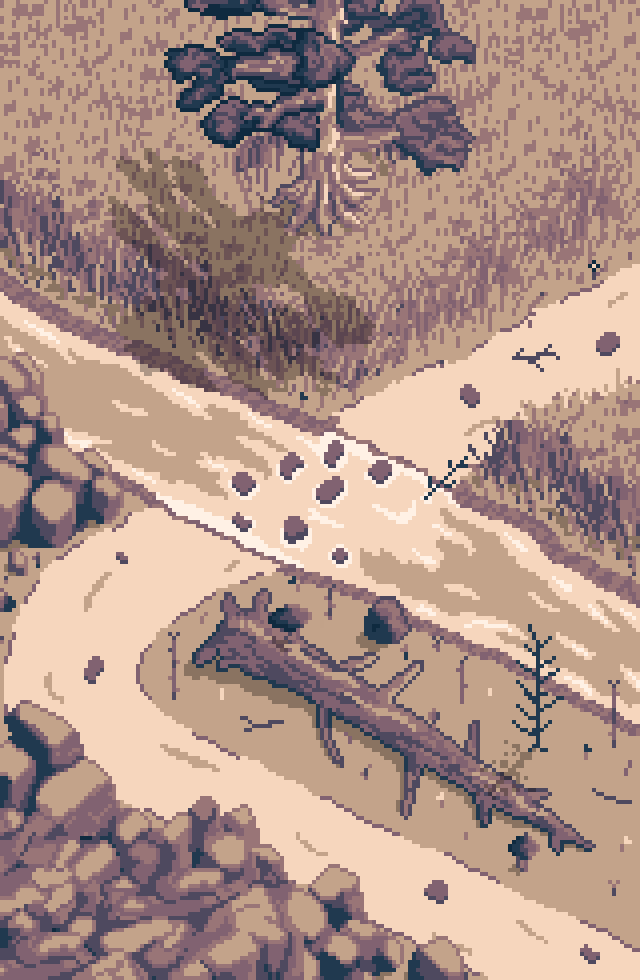 Traveling to a new place usually involves a paragraph or two that describes your journey, and those descriptions are now much more in-tone with the rest of the game. Previously, they were very short and limited to a pop-up window which had stuck out like a sore thumb. 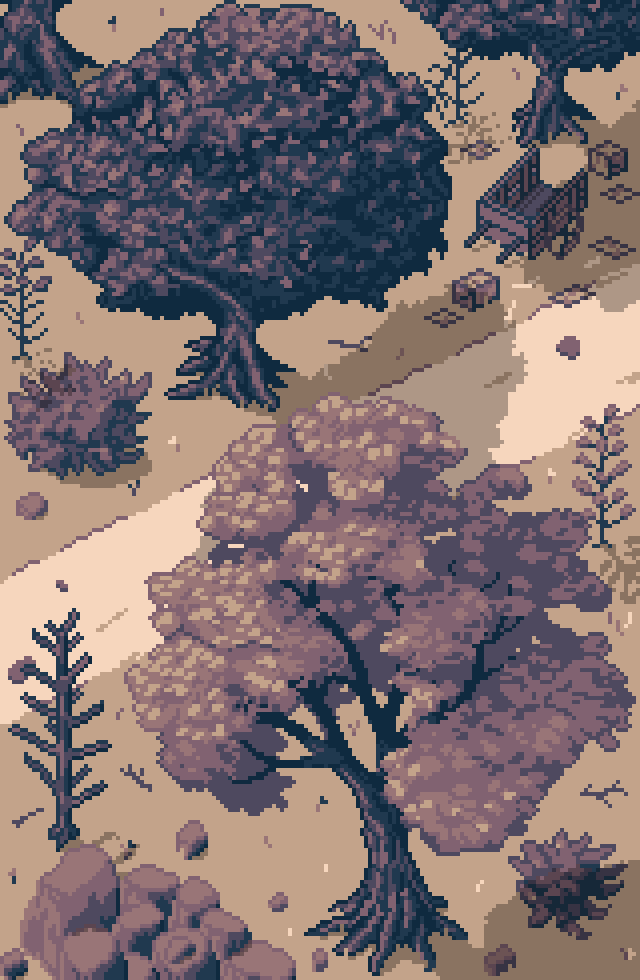 Now they use the same interface and illustrations as the rest of the game, what provides a much smoother experience.

8. Why the devlogs are less frequent 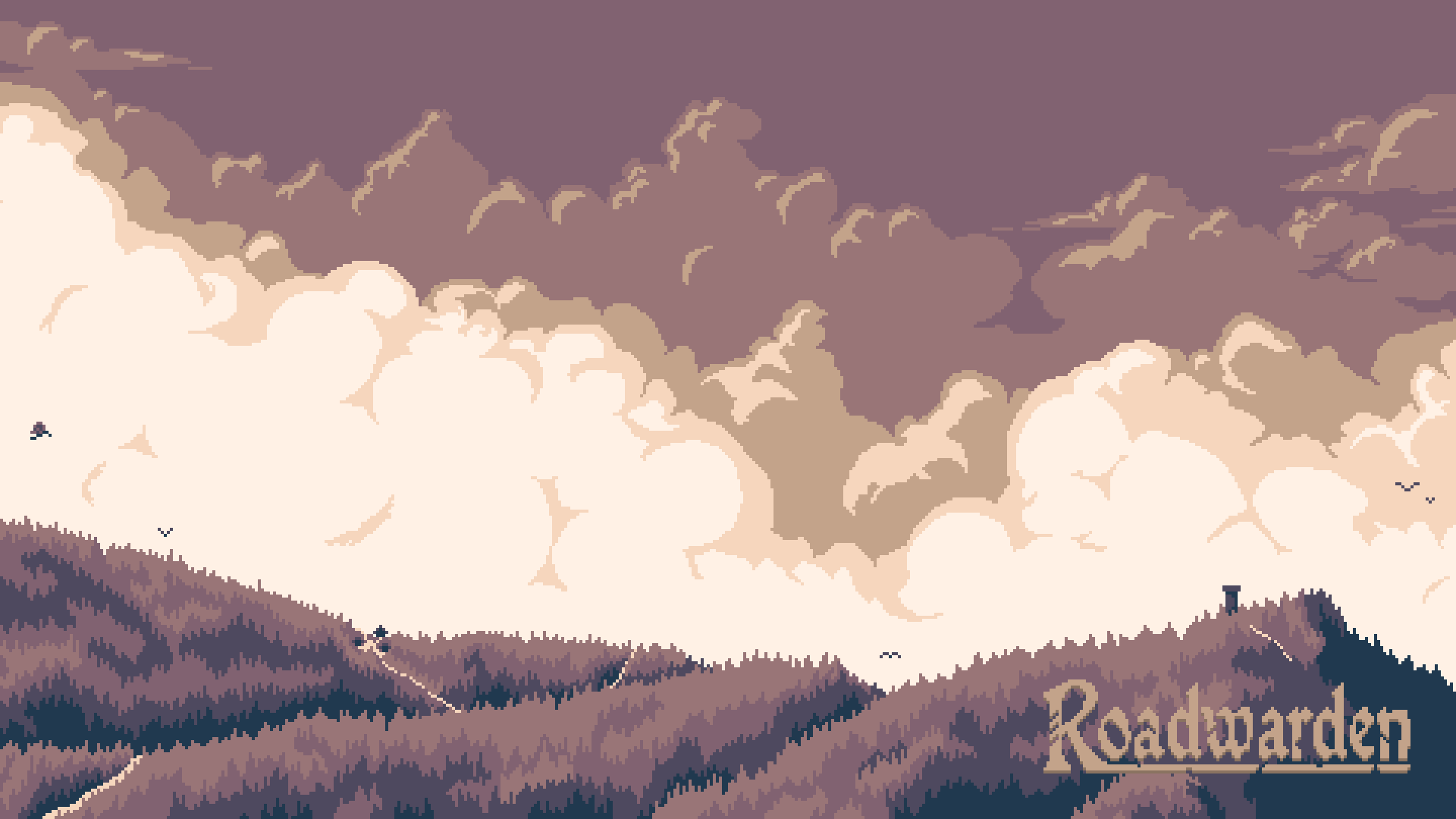 Almost four months has passed since the last devlog. The break was unfortunate, but necessary. I’ve landed in a hospital in September, what resulted in significant changes in my lifestyle. I had to give up on some of my activities. Devlogs, for example, take a lot of time, and it’s better if I focus on developing the game instead.

I’ve recently read some of the scenes that I wrote down right when I returned to work at the end of September. It’s like reading a letter from someone who has had a fever. I understand the ideas, but everything is a complete mess. There’s still a LOT of work to do.

The devlogs won’t be shared every weak, but I hope to publish one at least once a month. I hope to stay in touch with you. : )

Thank you for taking a look at this devlog, for your support and kindness. Remember, you can also find me on Twitter and Facebook, and the game has a Steam page on which you can add it to your wishlist. Have a great day!