A summary of how we planned to do the music, how it actually went and what we learned. Prepare for a music extravaganza!

Posted by SpellingPhailer on Apr 2nd, 2012

Hi there! Once again, it's Pontus here. As the course that this game was originally being developed for has officially ended (Don't worry, development will still continue on the game), we thought it was a good idea to give you some "Making of..." post, that pretty much is about how we did what we did, what inspirations we had and how it turned out in the end. As I am the lead composer, I will start with a MUSIC EXTRAVAGANZA! Whohooooo! 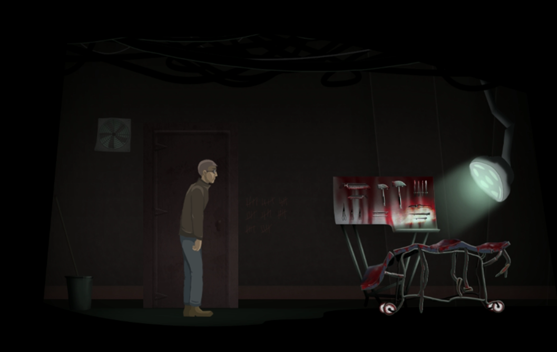 First of all, for all you newcomers out there, let me explain what this game is about: A Lamentable Sighting of Distortion is a storydriven platformgame that resloves around Mathew, a psychologically ruined Vietnam veteran who's flickering mind is torturing him with regret of what he did in the war.

With a story like this, it's not too hard to see the designers vision of the game. What he wanted was pretty much a game with a very heavy and psychological story, with graphics that reflected the twisted state of mathews mind. As for our department, he wanted the same feeling that the music and sounddesign in older vietnam movies, such as Apocalypse Now and Full Metal Jacket, gave. He also wanted us to make the music sound like it was from that period, rather than giving the music a high-fidelity modern sound.

This, of course, gave us a few challenges to overcome:

We had to focus on atmosphere rather than on making a catchy tune.
Like the classic vietnam movies, the musc had to be very ambient and fit into the background. We had to give a lot of focus on making sure that the music never ruined the feeling of the game, but rather empowered it.

We had to use many sound effects and few melodies.
Yet again, like the classic vietnam movies, we had to create many songs by rather making unsettling sounds and noises rather than relying on instruments and thier melodic use. This creates a much more uncomfortable feeling for the listener, and keeps him/her on his/her toes.

We had to recreate an "older" sound.
As this game was to take place in the mind of an vietnam veteran, we wanted to make the music resemble the style used in the late 60's and early 70's. This ment doing some research on what amplifiers and effects that were used during that period, and also to see what style and genres that were popular during that time.

We had to create a ton of dissonance.
When you're working on a game that is about someones psychological fall, you need to make sure that you use a lot of dissonance, in order for the player to always feel unsure and tense. When you start using harmonies, the player will feel more comfortable and will start to relax, wich is something you'll want to avoid in a game like this.

Of course, we had more challenges than these, but these were the major ones that applied to pretty much every song that we created during this project. 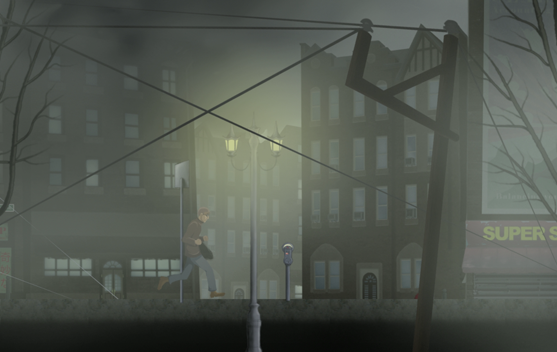 A screenshot from the second level of the game.

So what did we end up with? Well, pretty much a blend of Pink Floyd, Ennio Morricone and John Carpenter (Remember that all songs may or may not be altered with in the future!):

This was the first song we made. That means that this song also set the standard for the feel of the rest of the songs, and so also, the rest of the game. This means that this song, except for also having to fit the level, first of all had go get the right sound. This sound would later be used as a base for the other songs, so that the songs, even though they're different, would have the same basic feel to them, so you knew that these songs came for the same game.

This resulted in me spending the first day of this project on working in Logic Pro with the Pedal Board plugin and Amp Designer plugin to creata a good 70's sound for the guitars. This, of course, took awhile ta get right, and by the end of the evening I'd come up with a good preset that I could use for the rest of the songs.

Now, for the song itself, we focused on making a slightly psychedelic (but not too psychedelic, as this level was the most "normal" level in the game), and also give it a very lonely feel, reflecting the loneliness of the main character. Also, as me and my composer partner Eric are big movie fans, and also giant Ennio Morricone fans, we felt that the lonely feeling, blended with the old-school distortion worked perfectly with a lonely harmonica.

In this song, we also started a trend that we kept with many other of our songs: Effect breaks. These breaks were created to strengthen the atmosphere of the level and make the feeling that we were trying to convey much stronger.

This was the second song we made for the game, but also this song was made with the mindset that this song was going to be something like a theme for the game (it didn't turn out that way in the end, but when composing this, we didn't know this). At the same time, we knew that this level was going to be a bit more psychedelic than the first level, but still not super psychedelic.

This means that our first, and greatest, challenge with this song was making an iconic song (as it was suppose to be a theme song), whiles making it psychedelic. This is hard because psychedelic has a tendency to be "random" and dissonant, whiles theme songs have a tendency to be melodic and catchy, so that the listener will remember it and relate the song to the medium that it's written for.

So, we were a bit stuck. After being so used to make very harmonic tunes for theme songs, this wasn't very easy for us. However, after making a few songs that didn't really fit the bill, and after listen a whole lot to Pink Floyd, we came up with something that changed key every other beat, and that had a vey psychedelic feel, but will still managed to keep it catchy.

Also, we also had to create an action filled ending, as the level was suppose to have a bossfight at the end (yet another thing that had to be left out of the game), and so we made the song go a completely different direct after a while. As you will hear as well with this song, there's rain in the background. This is something that we're working on getting in that level, but as of right now, that has been put on hold.

Now, this level was without a doubt the song that took the longest time to make. The reason for this was because of one simple reason that has struck so many developers in the past and will continue to strick people in the future: Bad communication.

Our communication problem was not so much about us not talking enough with each other (we spoke to our lead designer multiple times a day), but rather about us misinterpreting what our designer ment. What he wanted us to do was a classic piano piece à la Halloween or The Exorcist, but we thought he wanted a classical piano piece. This lead to us creating two songs that didn't fit the level at all, and not until the third try, after we've understood just exactly what our designer ment, did we make something worth while.

So what did we come up with? Well, we got heavily inspired by John Carpenter, the director and composer for movies like Halloween and Escape from New York, and took a piano sample, made the attack and release much longer, but a huge and revert reverb on it, and also modulated it a ton. This gave it a feel of a classic piano piece gone wrong, wich was exactly what our designer wanted.

We also put a huge effect break in the later half of the song, wich is pretty much just a gigantic rumble of unpleasant tones, created by a couple of modulated pianos being hammered on. As a matter of a fact, this entire song is made with the same piano sample, but with different effects on each track.

This level is... Messed up. This level is pretty much the reason why this game is shortened to "LSD", and we had to make music that reflected this. This song was also one of the last levels in the game, and so we decided to use this as an opportunity to make reflections to earlier songs. This lead to the song becoming pretty much an ensemble of reversed, modulated and in general messed up parts of our earlier songs, playing on top of a foundation of psychedelic and strange melodies.

Because of this being such a strange song, there is not really that much more to say about it - It's 100% feeling and 100% strange, so I guess without further ado, here's the song:

So... yeah, that was a mouthful. But, now it's done and all that, and I hope you enjoyed it! Until next time, this is Pontus, signing out.

Very well written article and great music! As a composer myself (currently for Chernobyl), I was surprised when I read that the third song was made using only one sample in various different ways.

Also, as a composer who uses Logic Pro, did you record a live guitar, use an instrument library's, or what? A good electric guitar sound can be hard to create, props to the wonderful work!

Yeah, we only used live recorded guitar. Basicly, we used live instruments as often as we could, as we knew that if we used too many samples, the music would sound plastic, and that would affect the whole feeling of the game.

One song that unfortuneately still uses samples is the City song for it's drums. We are going to record live drums sometime in the near future, but for know we'll have to go with what we've got.