The process of coming up with and programming the game over a three-hour game jam. Starting out at Cluedo and ending up at The Thing.

In Zurich, there’s a regular gamedev get-together called Gamespace usually hosted by my friend Dragica. And the most common format is a micro-game-jam, where we pick a theme in some fashion and then spend three hours alone or in small teams putting something together. Having so little time does wonders for focusing the mind.

Last time around, we used story cubes, dice with little evocative icons on each side. I rolled my dice, and one of them came up with a footstep outline, which set off some kind of vague idea for making a game where footsteps mattered. The other two dice I rolled showed a butterfly net and some kind of temple, and so my initial thoughts went into the direction of catching museum thieves. Unable to think of a satisfying mechanic for this, I briefly considered making a murder mystery game, Cluedo with footsteps. 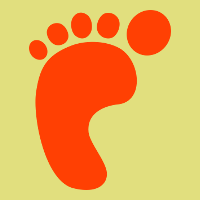 That also failed to resolve into a coherent design, and so I decided to just start coding something that let you leave footsteps and take it from there. I set up a grid of tiles with a “has footsteps” flag. For rendering, I picked two colours from the standard airships palette, red and skin, and drew this grid. Next, I added a position for the player’s avatar and arrow controls that let you wander around and leave footsteps.

I quite liked this kind of desolate wandering feel where it was just you and your footsteps. I went back to the murder mystery concept: perhaps something like Werewolf, where there’s a number of cabins in a summer camp, and you wake up each morning to see some footsteps between some of the cabins, and had to use this information to figure out who was murdering whom. That sounded potentially interesting, but I knew I didn’t have the time to figure out and code up some really clever system of behaviours and logical clues for players to work through.

But this image was wonderfully threatening: You wake up every morning and see the footsteps. It also made me think of The Thing, or its (excellent) source novella Who Goes There?, in the way there was some horrible threat that was impossible to observe directly. So there was some kind of monster, leaving footsteps for you to discover. You could never see the monster, but you could see it making progress. And you were isolated with no means of escape. Stranded in a cabin in a snowy forest clearing, you would wake up each morning and observe that the monster had dared a little closer, had lost a bit of its fear of civilization.

So I started creating this snowy clearing, making some really simple graphics out of pixel art: trees, your cabin, some fireplaces and firewood. I added an axe for you to pick up so you could make more firewood and light more fires.

Then I wrote the “AI” for the creature. Each night, it would spawn in one of the corners and try to make its way towards the cabin. But it only had a limited movement budget, and nearby fire - and to a much lesser degree, all other civilisational things like piles of wood and unlit fireplaces - increased the movement cost. You can see this in the visualization below. Each tile has a dot in its centre indicating the movement cost. Lighter dots mean higher costs, which is why there’s a halo of white dots around the two lit fires. 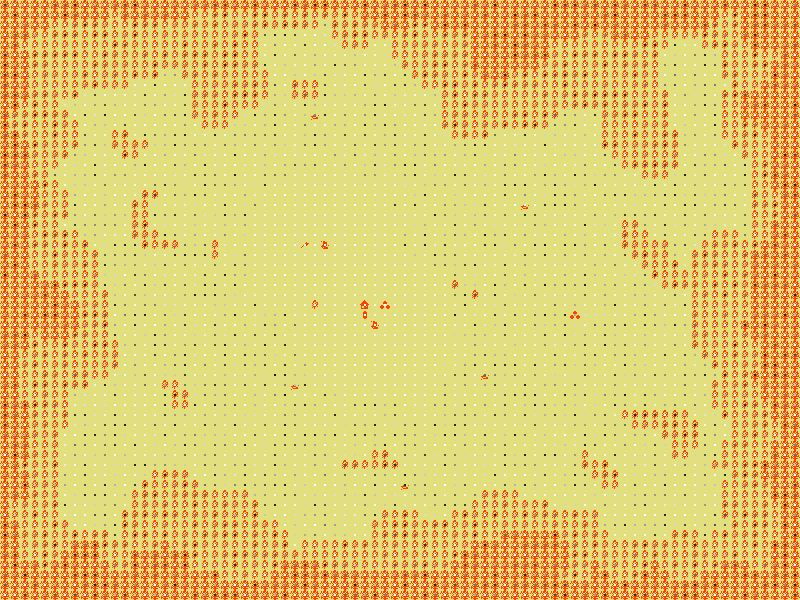 The creature would find the path from its starting point that got it closest to the cabin within its movement budget, a “gradient descent” effect. You can see this gradient in the next illustration, which is a kind of contour map centered on the cabin. You can see that with the fire in the top left, the contours rise more quickly, as walking within the radius of the fire would be more expensive. 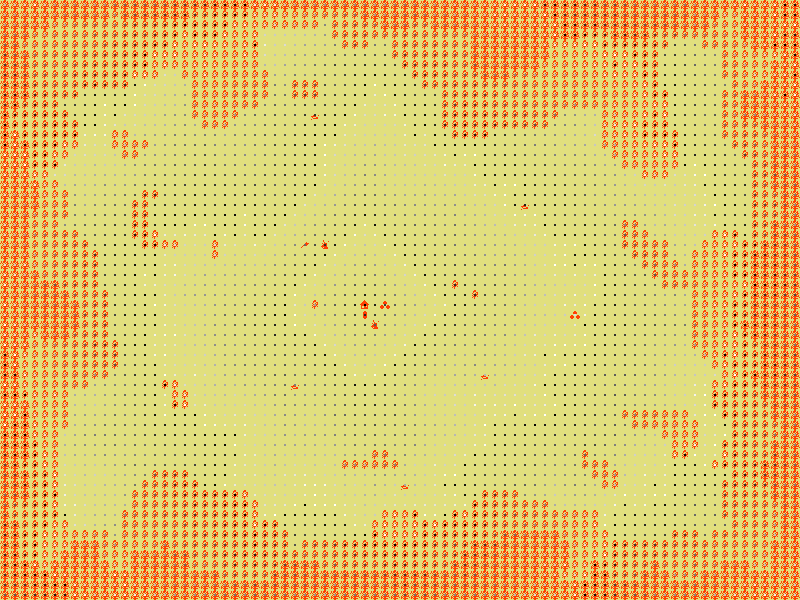 This meant the monster would seek a path towards the cabin that would avoid fires. Fire could be used to repel the creature, but each night its movement budget increased.

As it is, there is no way to win the game. This is partially intentional to reinforce the horror, and partly just because I didn’t have time for coming up with or implementing an interesting win condition. I did spend about an hour the day after the game jam adding some more messages and fixing minor bugs before making the game available for download. Still, I spent less than five hours on it in total.

Now the question is whether I want to extend it. I’ve got some ideas: you could stay up during the night, using a burning piece of wood from a fireplace as a very temporary torch. You might find other useful tools, or fencing. There could be a shed out near the woods containing some stuff or giving you a temporary place to hide. Perhaps I can come up with an interesting and subtle way for you to escape or survive.

One thing is certain, though: you will never see the monster itself, only footsteps, and traces, and perhaps eyes glinting in the light of your torch.

You wake up every morning and see the footsteps. Turn Based Strategy
Related Engines