Set of features explained for 'The Hunt for Slenderman'.

An interactive colored text game with background images and 3D models.
Many of you might remember old but classic games like Zork, an interactive text-based adventure game. It was one of the first games ever developed. The game I'm developing, however, is going to be more than just a text based game. Each line of text in the game will be colored depending on a certain event. As your character speaks, his/her dialogue will be in a different color than the dialogue expressed by the NPC. The game will also load different images and 3D models based on the certain events. Imagine you're in an area where Slender man is hunting you. The game will load a 3D model of slender in the background just behind the text and he will do certain things and you will see it in the background. Read at the very bottom of this news post for more info about this kind of feature. 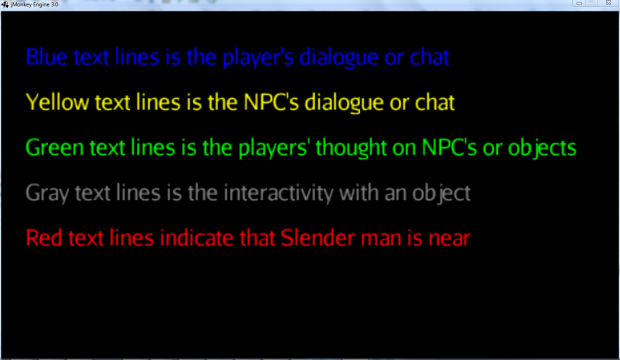 Image demonstrates that each event has a different colored text.

Learn more about Slender man and why he is abducting children.
Slender man is probably one of the most popular monster's or entities of all time. We all know that Slender man is a tall monster with the appearance of a person even though he has no facial features. We all know he catches children and anyone unfortunate to set foot in his forests. But what really happens to them afterwards, does he kill them? Does he keep them for his own, making his own personal army of possessed beings? Well, its time to find out as this game expresses everything that has been recorded in the Wiki pages, as well as my own recorded info.

Travel different nations and uncover the secrets.
For centuries, people have written stories or poems about a tall man that catches children. In countries like Germany, names like 'Der Ritter (The Knight)' and 'Der Großmann (Der Grossman/The Tall man)' has some sort of resemblance to the Slender man. In this game, you will have the opportunity to travel to different nations and uncover the truth about the Slender man and if he has any connection to those names.

Choose your own path in this text-based game.
You will have choices in this game, each choice you make will have an impact. Each choice you make will allow you to experience the game a little bit different from the other choices. Some choices will not have such a big impact to the game and the others will have such a big impact that you will either survive or die. It's your choice but be cautious, many of the choices out there might even bring slender man closer to you...

Come face to face with the Slender man himself and try to escape his grasp.
In certain areas, you will have to face Slender man himself. You will notice that he appears in the background and you will have to make the right choice every time to get away from him. Each right choice you make, he moves further away from you until he is at some point that he can't reach you anymore and you will progress further into the game. For every wrong choice you will make he will come closer to you, if you keep choosing the wrong choices he will draw ever closer until he has you into his grasp. Then you will have to restart from the last save in the game. 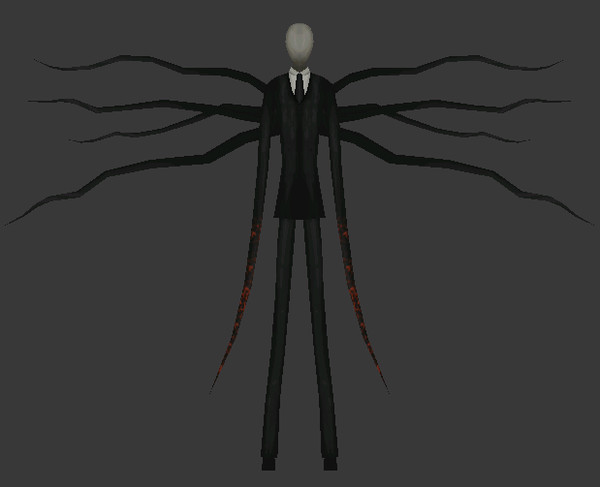 The Slender man model that will appear in certain times in the game.

Each feature explained above will be included into the game. If you have any thoughts or ideas, don't hesitate and post it in the comment box. I'm still not sure when I will release this game as the development is progressing slowly but I will post the date soon. To every slender fan out there, enjoy the rest of your day.