Another AI update with major progress on castles and those who occupy them, other developments, and bug fixes!

Posted by UltimaRatioRegum on Apr 12th, 2016

Well, I wound up taking two days off work and three more days working from home, but I’ve mostly recovered from my recent chest infection through the combination of rest, food, and copious amounts of medicine. This was originally going to be the penultimate AI entry, but having lost over a week in total from this bloody thing, we’ll see how that actually plays out. In the last fortnight, when not hacking and coughing, I’ve been working on finishing off the remaining NPC AI needed to put out the playtesting release in the near future. I worked on castles which were a lot of fun to do all the AI for, most of which is already working really well due to the ability to reuse their code from elsewhere; on making sure merchants, priests and guards in other contexts (i.e. not just cities) all worked correctly, on getting monks and abbots to behave correctly, and on fixing another huge volume of bugs. At this point it’s just castles and monasteries that need finishing, and these are my main tasks for the coming week (assuming, of course, no other illnesses that confine me to bed…). Read on!

Castles have proved to be a very enjoyable break from the rest of this hell – most of their NPCs never leave the building, their schedules are relatively simple, and they’re just so different and aesthetically pleasing that I’ve found this process all rather pleasant. At the moment almost everything seems to work, though there are some tricky things I’ve had to catch where I’d written code for a particular NPC class, forgetting that they could sometimes spawn in castles as well as elsewhere. One example was servants, who in upper-class housing and mansions automatically always sleep in the basement, but in castles actually live on the ground floor (if present); in castles it is only slaves (if present) who sleep below ground. I had to go through quite a bit of code and make sure that the game checked whether servants were in castles or mansions before directing them. The same applied to a few other NPCs, like guards that both sleep and work inside (unique) and so forth. Similarly, I also found that I needed to add in a special line of code for NPCs trying to do inside schedule targets in castles that checked they coud actually path to the target they’d chosen. This might seem obvious and surprising that I hadn’t put it in before, but previously all upper floors of buildings had only one large connected space (even if some of it had permission requirements), so one could always be sure an NPC could path from X to Y on a floor; by contrast, castle upper floors can have parts of turrets and towers that are disconnected from the main floor, and thereby impossible to path to from certain areas, and so NPCs now always check the path they’ve chosen can actually be walked, instead of relying on the game to never generate/choose an unwalkable path. As I say, this was the case until now, but it isn’t any more! Here’s me approaching a castle with some soldiers (‘5’) and guards (‘g’) outside, showing that this is a nation with a standing army:

Here are a few gifs and images from inside a castle (I’ve been using one particular civilization for all my testing, hence the universal silver/grey colour). First we have a throne room with a lot of knights (‘2’). This is a stratocracy, so the ruler’s throne (the yellow symbol in the middle, which will soon have its own unique generation system) has an unusually large amount of high-ranking protection. 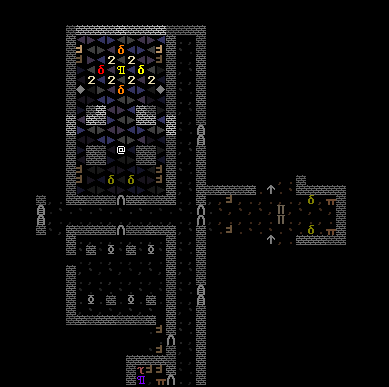 The quarters of some soldiers, with various soldiers sleeping off-duty whilst their duplicates guard the castle outside (soldiers appear in castles in nations with standing armies). 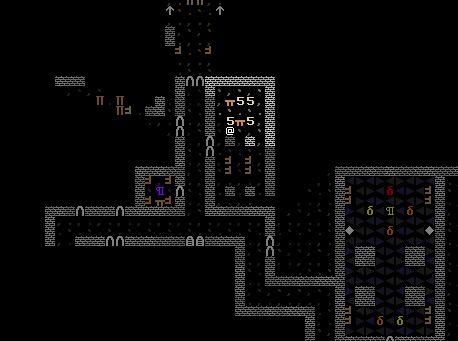 Some priests (very slowly) meandering in their respective chapels in a castle for a nation with religious freedom as its ideology; whereas priests in normal churches are programmed to wander around and look at altars and desks and statues and whatever, these folks use the same body of code as chieftains or prisoners or mercenaries, i.e. wandering around within particular confines (since it would be rather odd to have them looking at the altars of others!).

And here we have a servant on the ground floor going about their day, going up one of the towers at the edges/corners (depending on the layout) of the castle and cleaning one of the chairs on the upper floor; on that floor we also find a guard (‘g’) and a knight (‘2’) sleeping. Somewhere their equivalents will be on

Here’s a monetary cache. This nation has a free trade economic policy, so they have a cache of coinage from a range of other nations in the castle – or, y’know, they will very shortly once I implement currencies. For now though, if you see two guards like this – that’s what they’re guarding. Alternatively, another policy (protectionism, I think) leads to a castle having a large cache of domestic coinage instead, and these are mutually exclusive policies, so there will only ever be one, or neither. 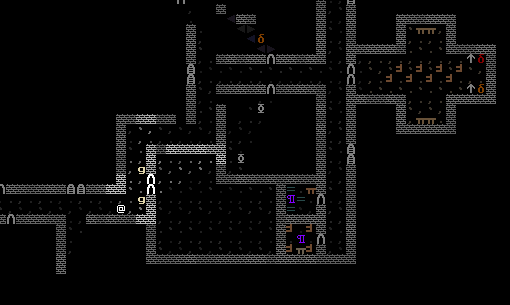 Merchants, Priests and Innkeeps in Towns

Merchants and priests all work correctly in towns. I had a momentary bit of panic as I realized that I’d only tested priests and merchants in cities, and although the code shouldwork in towns just as well… there was always a chance it wouldn’t, since various things are stored in different ways in towns and cities. Nevertheless, a little bit of experimentation confirmed that everything was working fine there. Here are two shops in a town near the above castle:

Wow. Monks and monasteries. What a nightmare. This is taking so much longer than anticipated – the complexity comes from having multiple buildings on one map, all of which might or might not be spawned, and the presence of tasks that take NPCs from one into the other… and various other things besides. Therefore, I have taken the decision to actually massively simplify them as spawning NPCs from this release. Their schedules are just too damned complicated ordinarily and need too much moving between buildings, acting outside buildings, blah blah… it’s all trivial to handle when the player is on the map grid, but when the player is elsewhere, or they’re present and they’ve spawned some buildings in the monastery complex but not others… urgh, what a nightmare. Therefore, for this release, despite the lovely gif of farming monks from a few weeks ago, monks will actually stay completely indoors. They will awaken, get up, do some work throughout the day, then turn back in. For 0.9 I’ll return here and get them tending to their vegetable gardens and visiting the religious building in their complex, but not just yet.

Another fortnight with loads of new bugs discovered and dealt with.

Firstly, we had a bug with categories of NPC who all sleep on the same floor, in the same building, and go to their bed at roughly the same time. If two were targeting the same bed, they would not register it as an inaccessible bed since nobody was on that bed YET, so they would both go there, the person to get there first would claim the bed, and the latter would just stand next to the bed, desperately pining for the bed they could no longer have. Some new lines of code now detect if someone has just stepped onto the bed you’re going after, and NPCs now change directions appropriately; in a future release I’ll have NPCs actually claim specific beds, since right now they only go to general beds – servants will go to any servant bed in their mansion, priests will go to any priest bed in a cathedral, and so forth…

I then ran into a bug that took about four hours to resolve, whereby in a tiny subset of possible religious buildings, priests couldn’t figure out what to do. This took a disappointingly long time to diagnose, especially since it was a block of time that I’d marked out for making sure monasteries worked correctly, but in the end I sorted it out. It happened in religious buildings that contained pools and only a tiny number of chairs/tables, or contained only prayer mats without chairs around tables in the building. These are both pretty rare subsets, but basically the code for choosing locations for humans and priests to meander to weren’t correctly handling pools (they should just gaze into the pool, like the gif below) and weren’t handling prayer mats, since they are stored separately from “chairs”. This is now all sorted, and I think this should work fine for any and all religious buildings.

And here’s a rather nice gif of a matching prayer mat, clothing, and altar, just since I happened to be in a religious building with a pleasing level of colour-coordination:

Then ran into a rather strange bug, whereby people who work in buildings they don’t sleep in, and did everything from their work day before then going to bed and reaching their home away from the player’s observation, would fail to spawn when you then spawned their map grid and went into their home. This one was puzzling, since I’m sure this worked before… but on the other hand, there are so many permutations of saving/loading and whatnot that it may well have been a particular variation I’d missed on my first sweep a few weeks ago. Either way, it all works now!

Castle AI finished, Monk/Abbot AI definitely functioning correctly, any remaining tweaking required to put out the playtesting release, and… who knows, I might even start working on the conversation window?!?! But let’s not get ahead of ourselves (for once)…