Time to take a look back at when, where and how it all began, and where we are today!

Since I recently finished writing the script for the visual novel half of the game, I think it's fitting I take a step back and look over the story of the game itself, from its conception to its actual form. It's something I went over in a few posts on tumblr or TIGsource already, but I hope it's worth gathering in one place, and in one big comprehensive article. So let's start!

In March 2013, I began work on a series of illustrations titled "Videogame Heroines ABC", simply as a means to practice stylistic representation. After I went through 26 characters, I thought of making a follow-up, another ABC series, except this time based on imaginary pitches - games I'd invent specifically as a base for each illustration. This was the illustration for letter H: 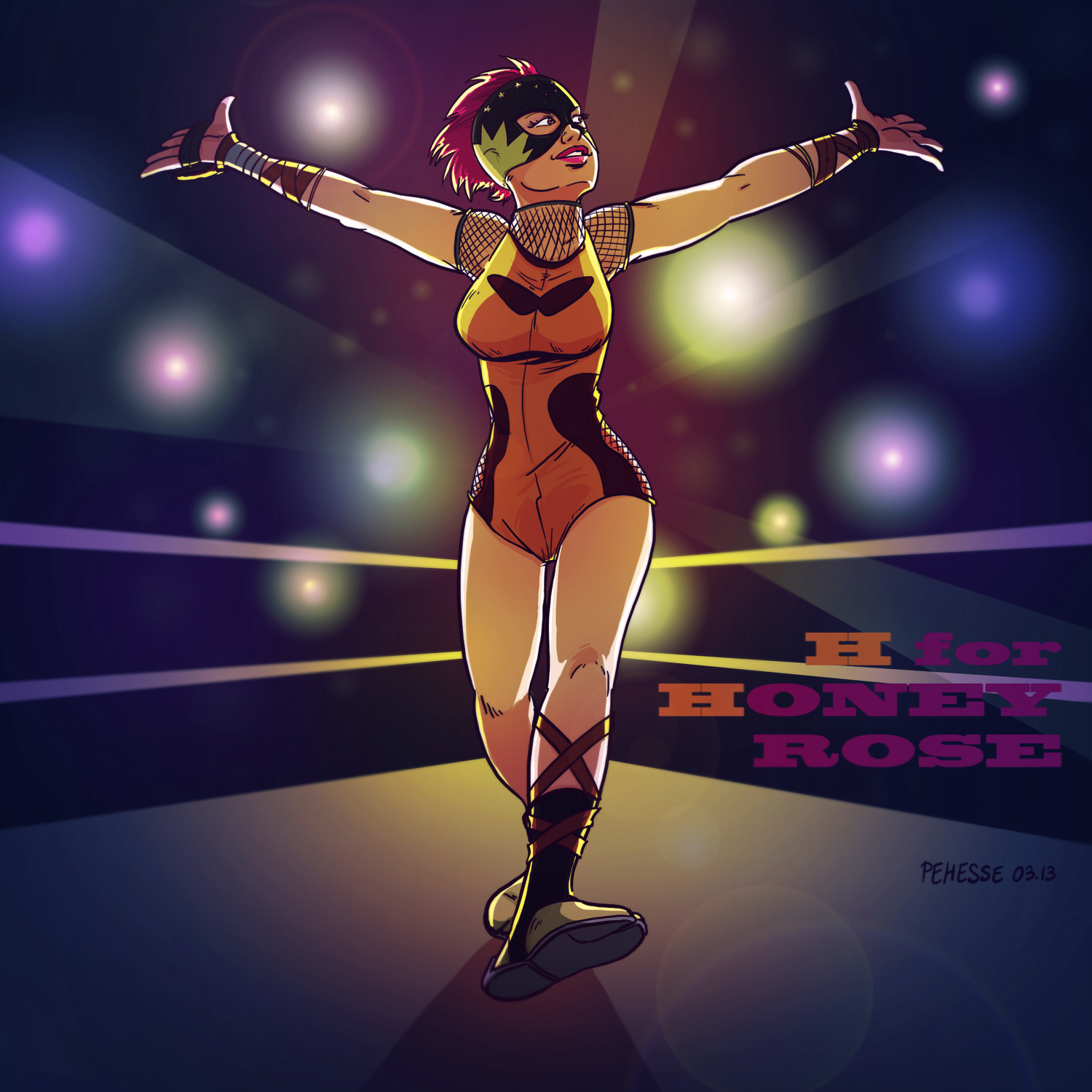 The associated pitch was: "“Honey Rose” is the defined alias of the player character in the game with the same name. Albeit a normal high school student during the day, Honey takes on her true colors at nightfall in lucha libre competitions. The game is an exercice in balance - will the player focus on their daily life, their nightly rising star persona, or try to find a balance between the growing demands of the two? Will they let some of the people they meet on either side know of their situation?"

I went on to finish the series, and started work on a couple of independant games, but the thought of this series lingered, as I rather liked some of the pitches and I thought some of them might actually be feasible as a solo effort. In truth, I had begun preparation work on another project, based around the letter V for a character named Vea, starring in a sci-fi adventure titled "the Farthest Reaches". I quickly ran into time constraints, however, as it was too hard to develop this solo project along with the other titles I was working on, and scale issues, as the game would require massive amounts of 2D character animation, and I had close to no experience with that at the time.

Meanwhile, a dedicated supporter and friend found interest in the ABC series as well, and eventually commissioned me to develop one of the pitches further through another illustration. We decided on Honey, and went to design additional characters that could be her opponents, were her game to become reality someday. The design constraint, as I recall, was simply color themed, and led to these: 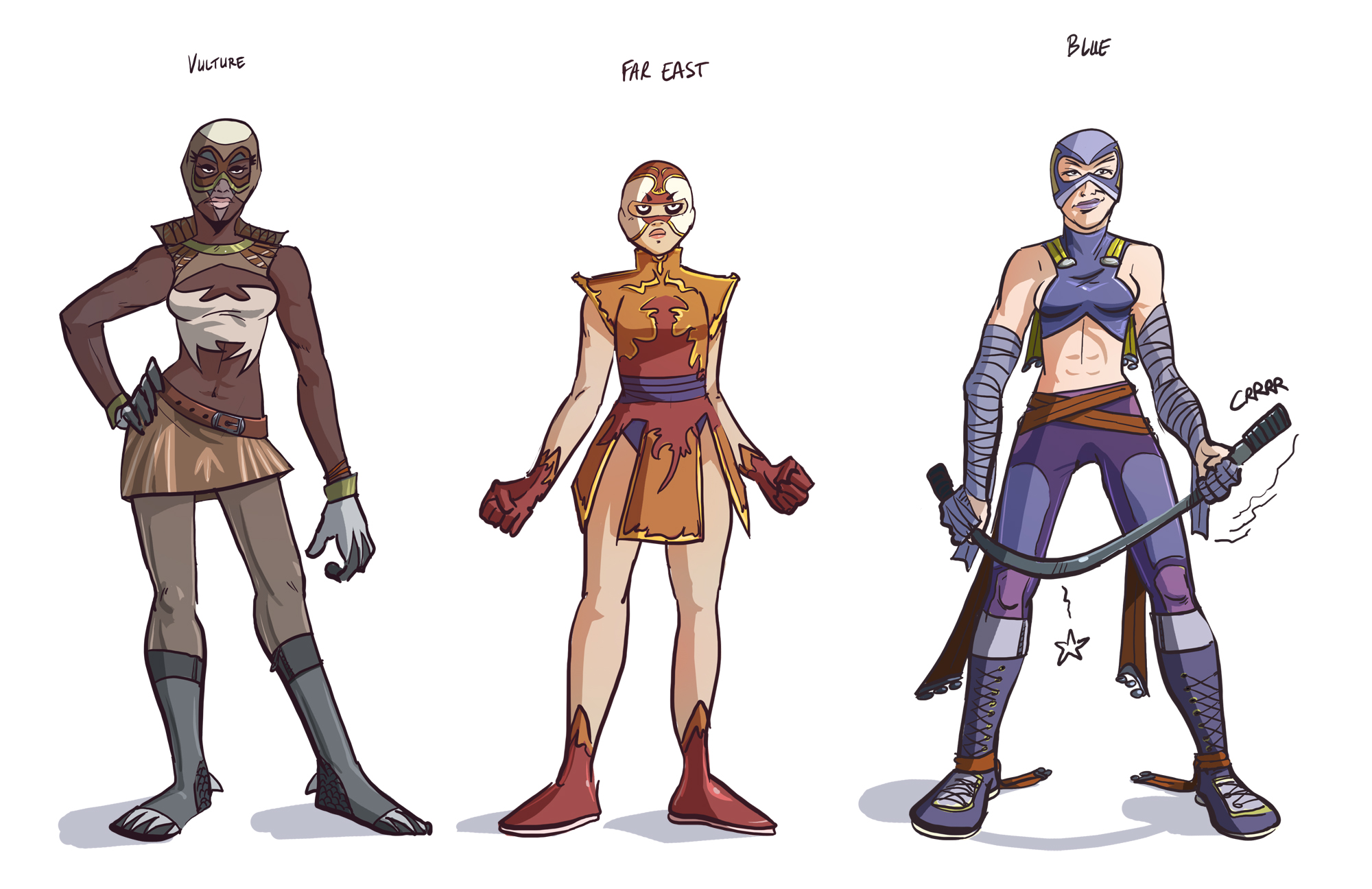 Though none of them were characters yet, we thought these base designs were fun enough to keep developing through illustrations, like this: 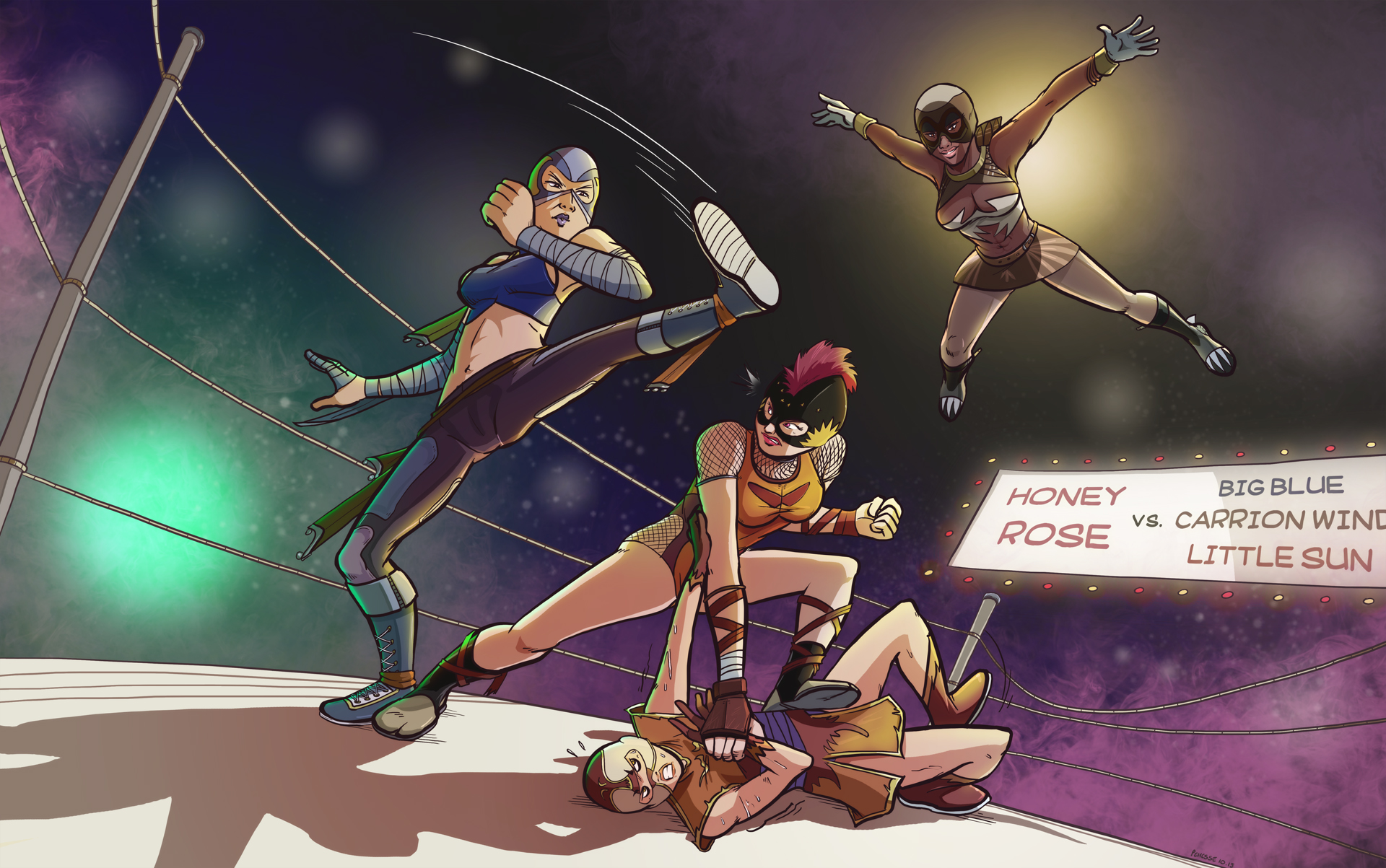 At the same time, my work on the other projects was coming to an end, and I thought it'd be the perfect opportunity to start developing a small prototype using these characters and illustrations as a base. The aim was to get a 2D beat'em all prototype up and running, to practice making 2D character animation, and use the experience to eventually start building the other game, Farthest Reaches. Work on the prototype started on November 24th, 2013, and looked like this by the end of the day: 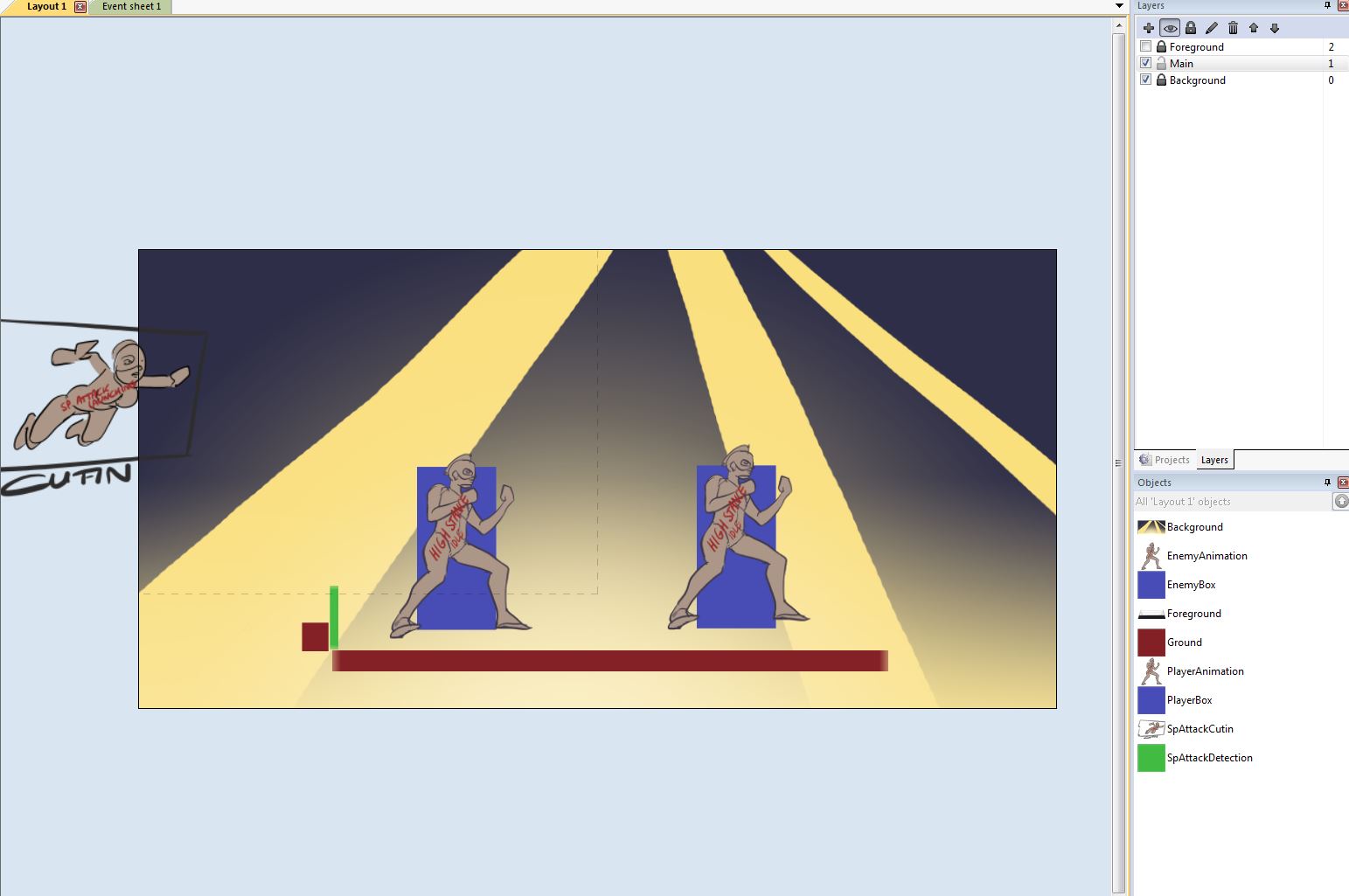 Since work was going so fast and so well, I thought to prototype the visual novel segment as well, just to see if it was possible. This was meant as yet another test before Farthest Reaches, which was to be dialog heavy. 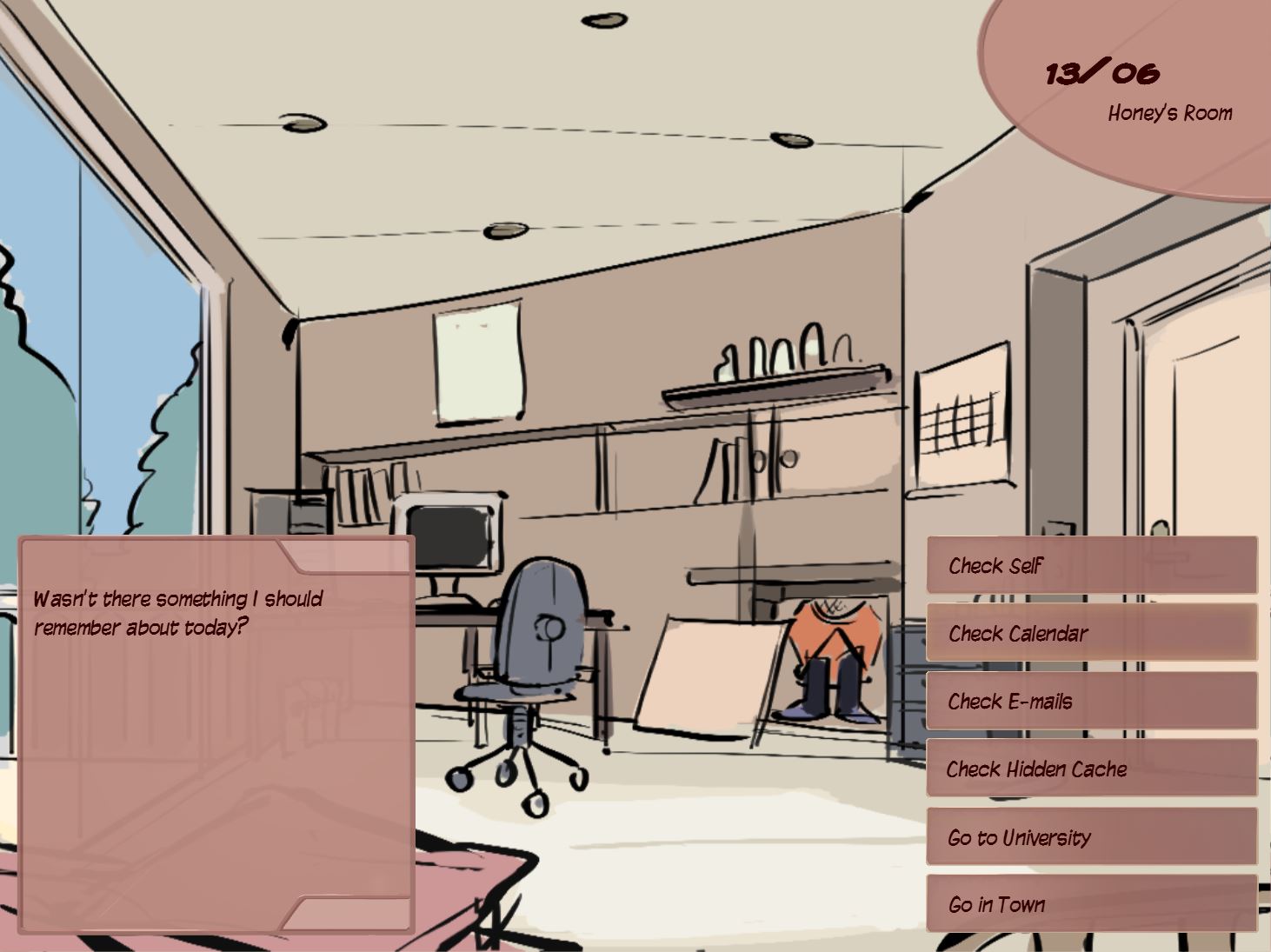 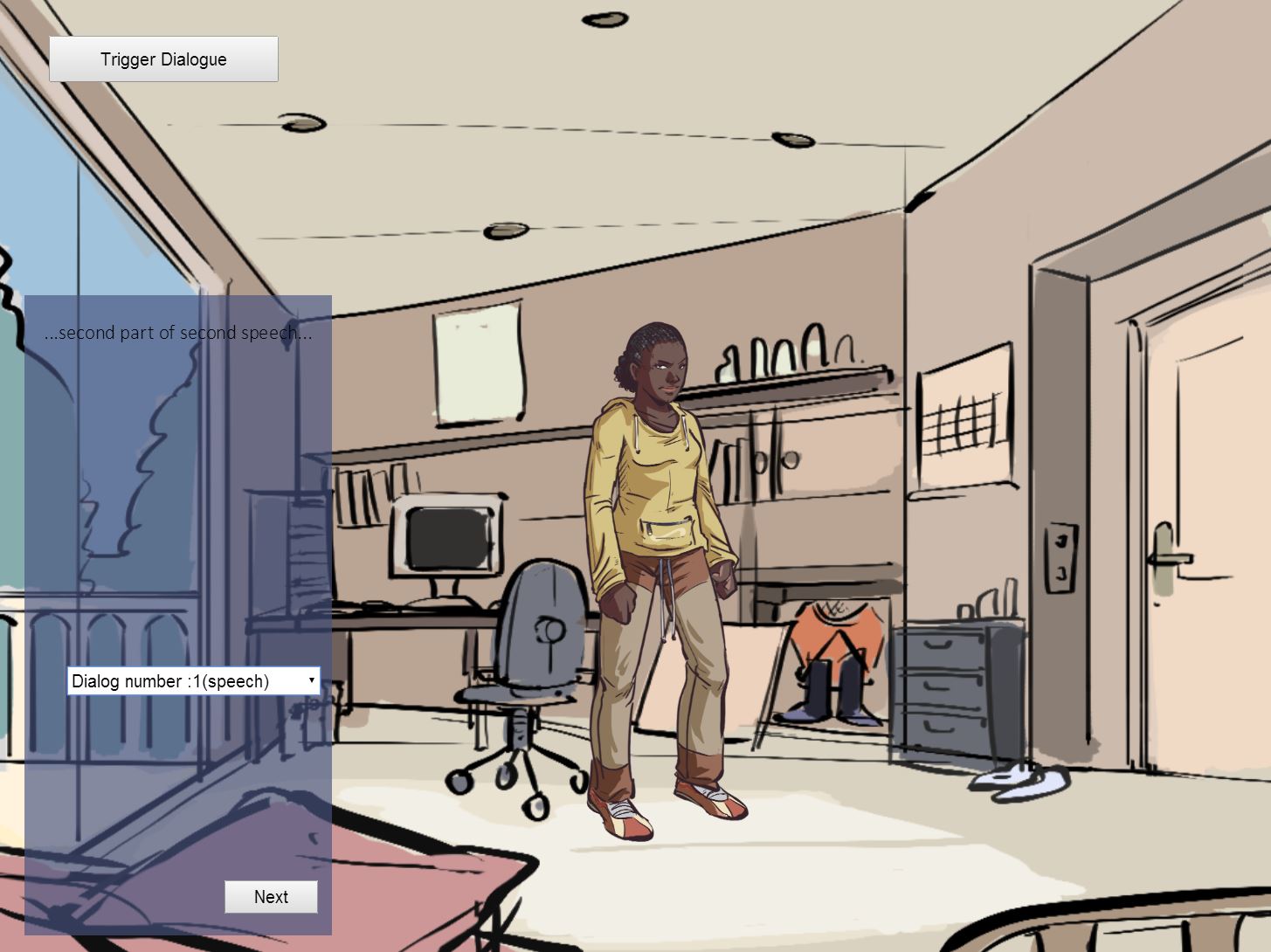 In the scope of a few weeks, I had a working base that represented what I thought would be the entire game I had envisoned in the pitch. I thought making the game wouldn't take that much longer, I planned for 6 more months of development, and started hacking away at a first demo to test player reactions. In the end, this turned out to be just enough time to make a working visual novel system with no script, and a single match versus the first opponent, Little Sun. 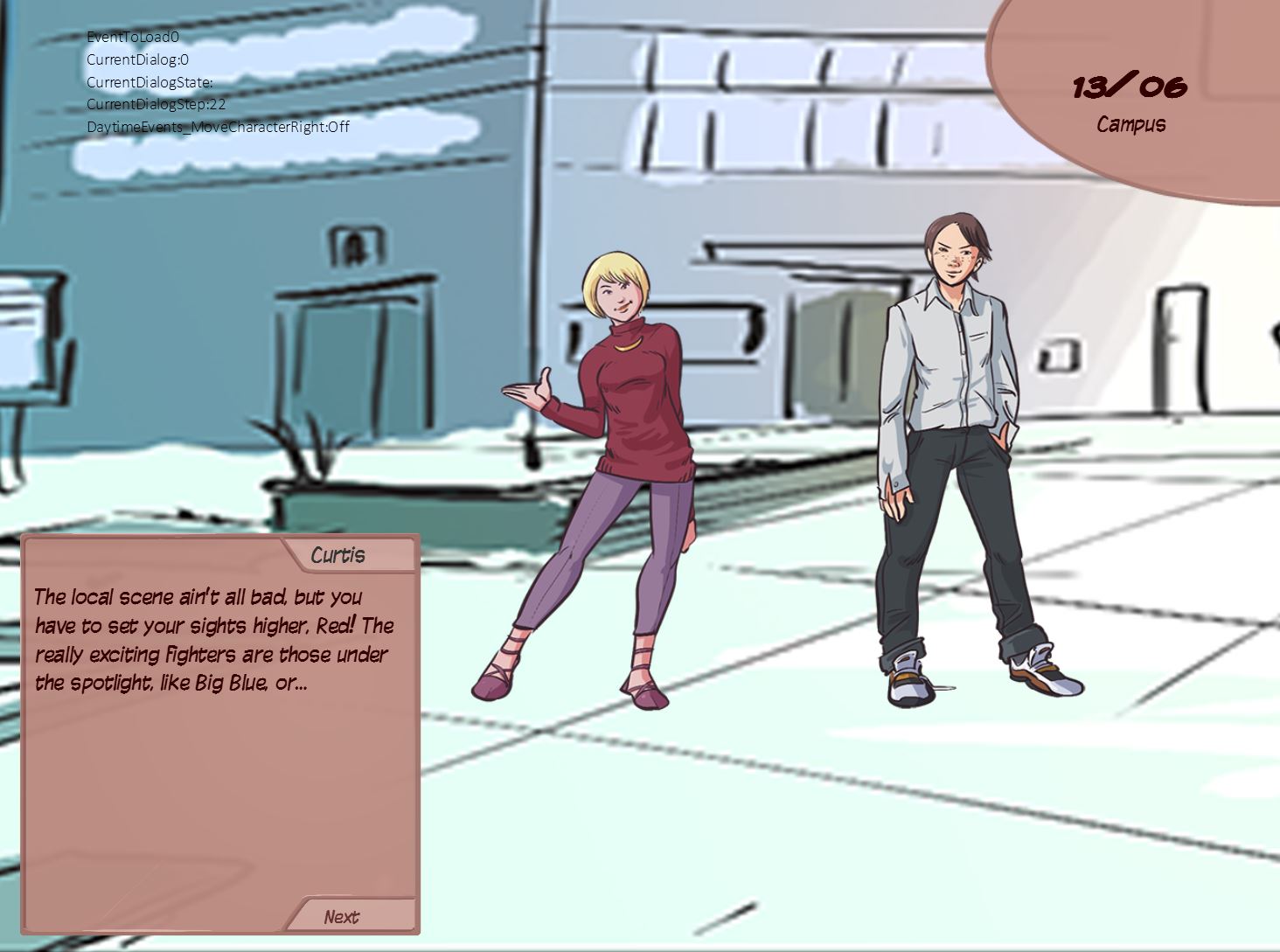 I'll leave the detail of specific design decisions at the time for some other article, but in the end, the demo turned out to work, and proved fun enough for players to enjoy. Honey had turned from a test drive to an actual game I was itching to make. I contacted Morusque to see if he'd work on some tracks for the game... and luckily, he agreed, and everything exploded from there.

I focused next on developing the visual novel half of the game, which grew in importance as what the game was to be about solidified. A more developed story and themes were added to the original intention of only random, short quips and events. The background list grew from a half dozen to over 20.

That is when I began to run into playtesting issues: the game, as it was developing, was getting increasingly incomprehensible. The original idea was to have every information presented in the most diegetic way possible to the player. Everything in visual novel mode would be conveyed through dialog, and everything during fights would be displayed through "health portraits" that would flash during the match - having different animations states would be evidently infeasible, but I thought to discard the classic element of the health bar altogether.

I resolved to turn away from what felt like punitive design, and instead rework the systems to present information in a way that made thematic sense. I added health bars back in the fighting segment, as they're an important feedback and satisfaction loop (and to be honest, I missed their presence), and I developed the status bar for the visual novel mode to convey information to the player. The aim was to offer a general sense of their statistical progress, while still keeping the exact maths and numbers out of sight. 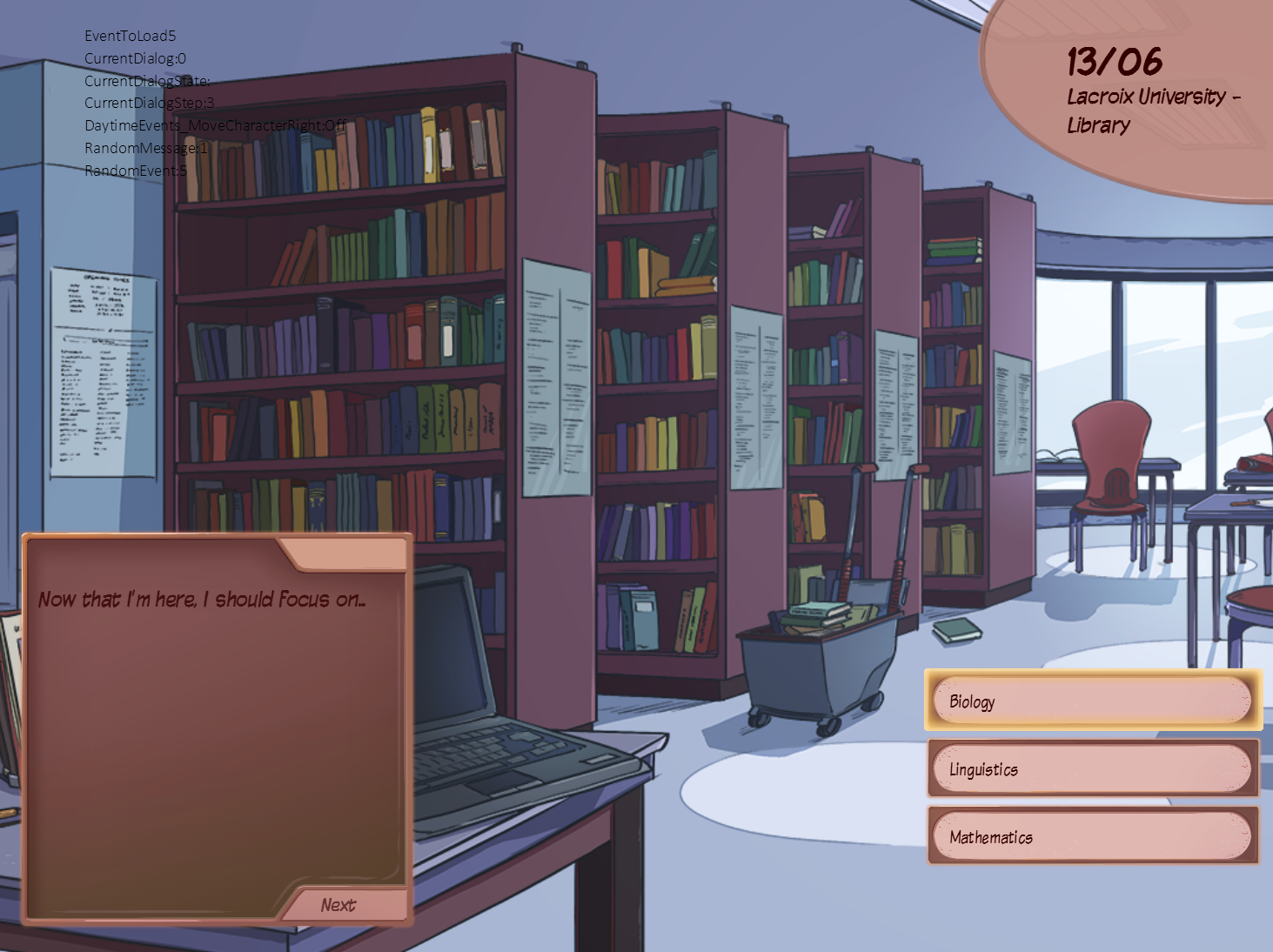 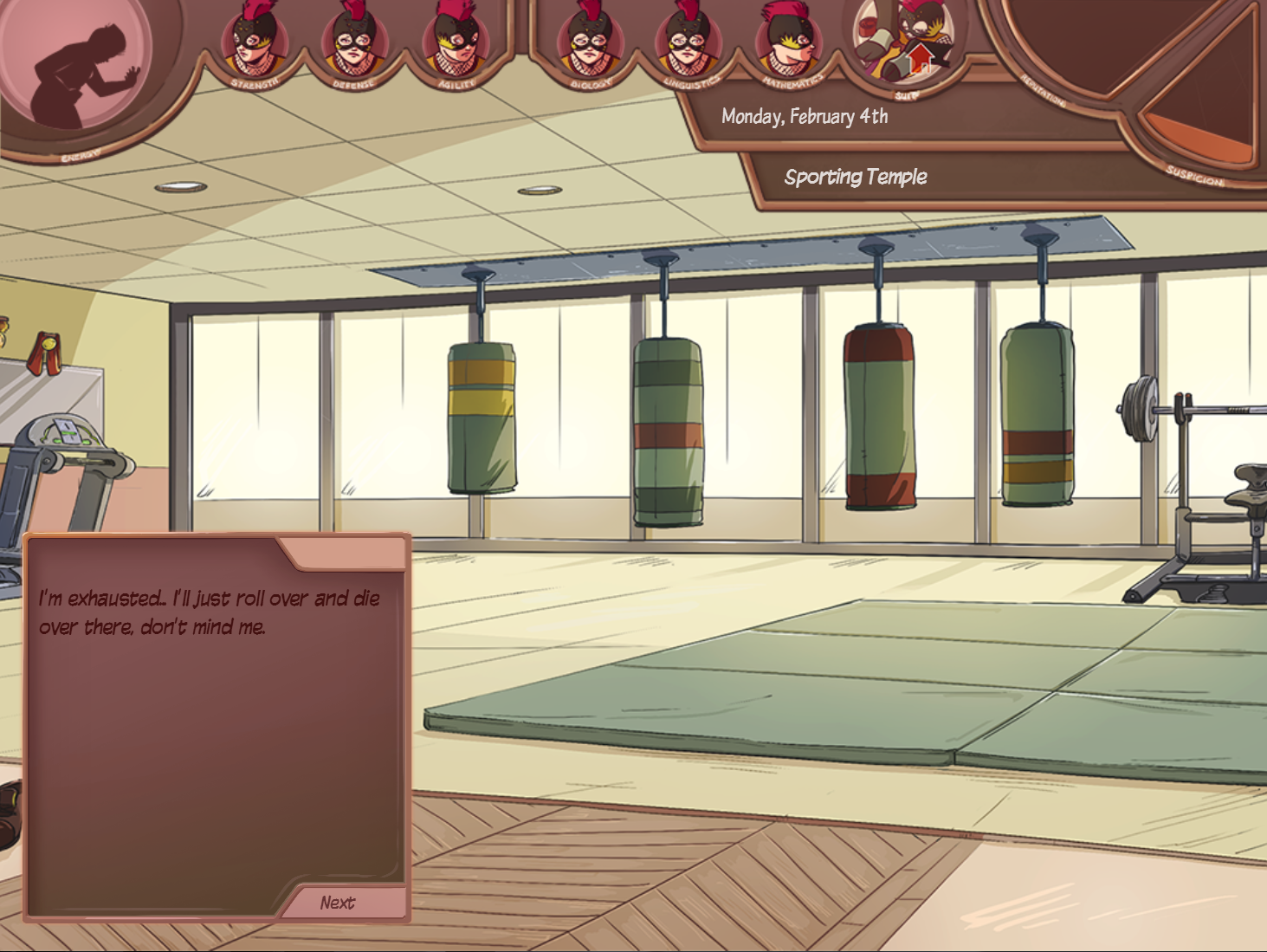 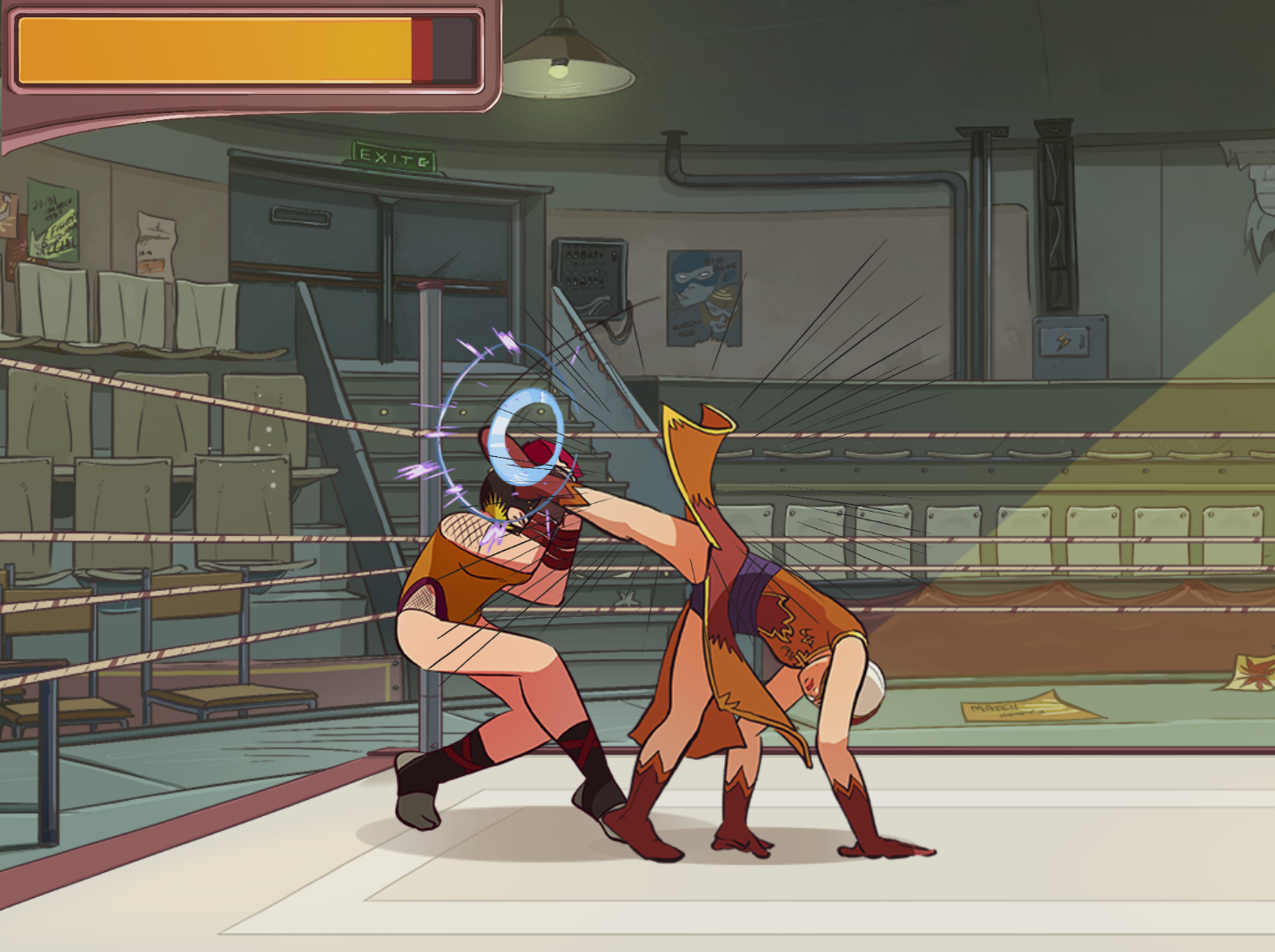 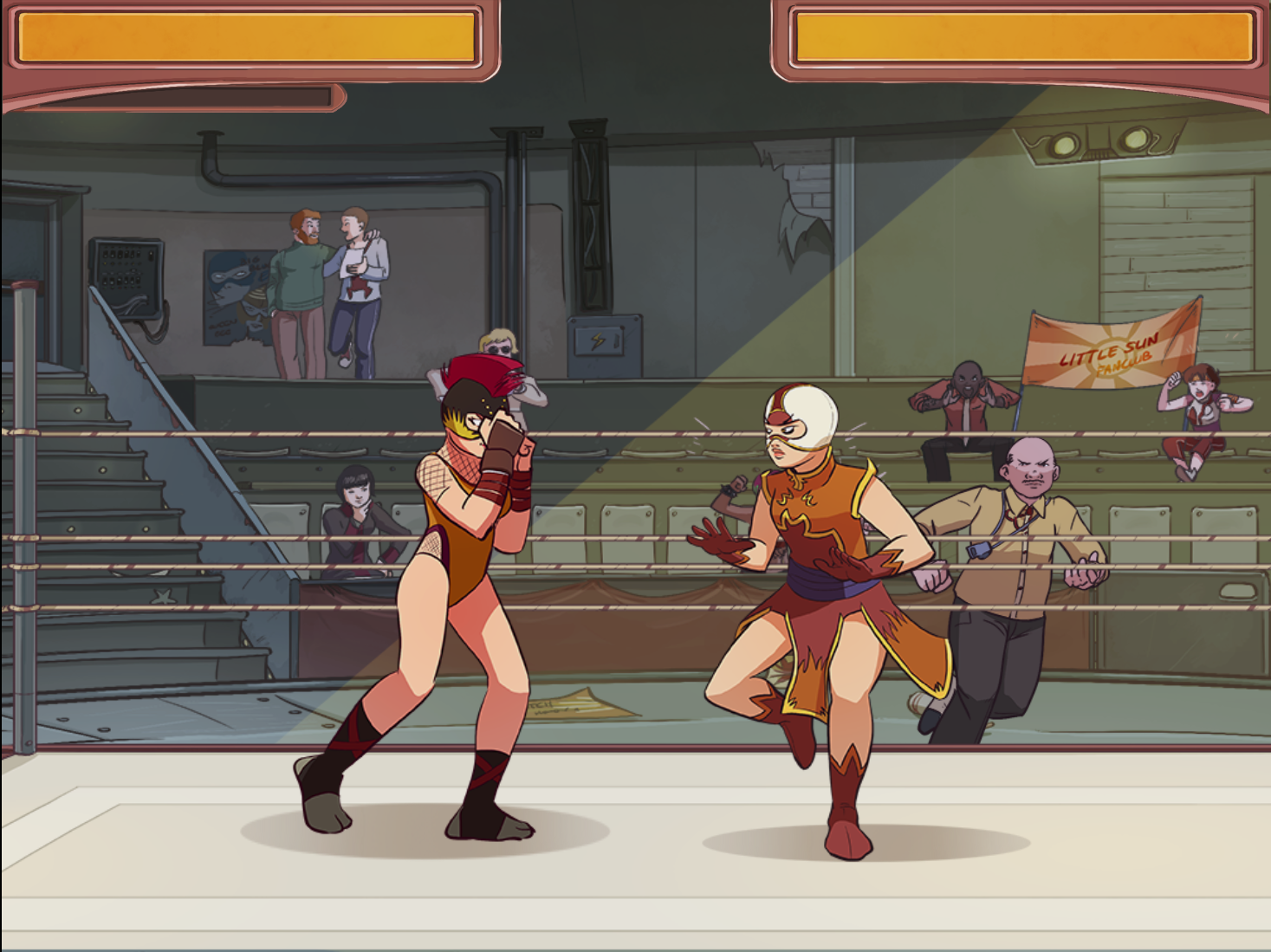 After a whole year of work on a game that was meant for a 6 month development cycle, I realized this was going to take longer than I thought, as I had a visual novel half with 10% of the planned script in, and a single working match.

I started 2015 discarding any hope that the game would be done in a timely fashion, and began working on what I had decided against back when I thought development would be an affair of months: visual novel animation.

This was one of the main criticisms of the 2014 prototypes, as the visual novel segment felt lifeless in comparison to the match, due to the stark disparity in visual presentation: 2D animation for the matches, static character cutouts for the narration. And since one of the original aims of the project was to gain experience in 2D animation, why not got all the way? Thus began the longest 6 months of the project. By mid 2015, the visual novel segment now looked like this:

It was time to go back to developing the fighting segment... where the animations looked dated in comparison to the visual novel ones! So I updated large chunks of them, and worked on the remaining opponents. By the end of the year, I had two new opponents for Honey, characters based on the earlier designs: 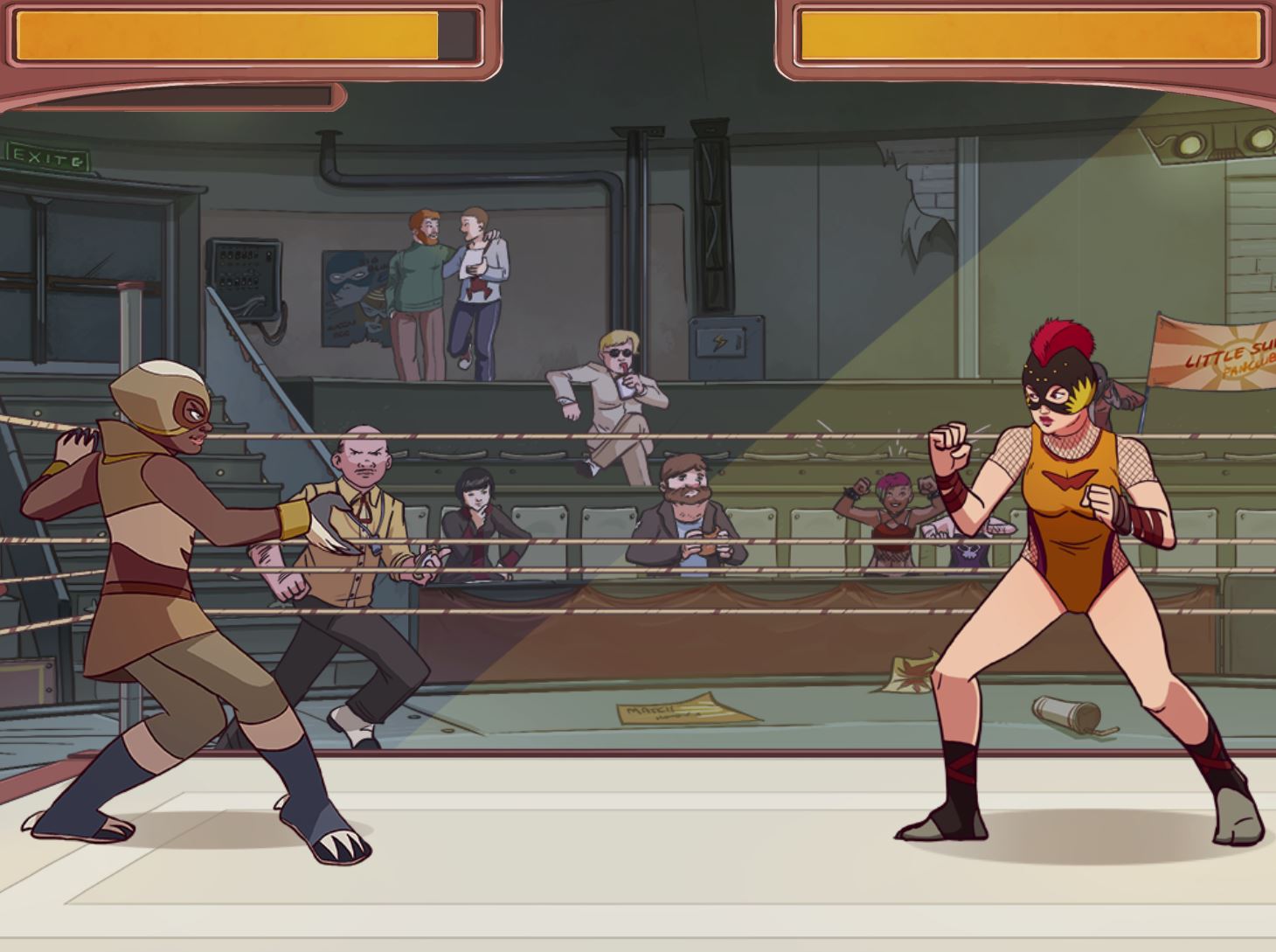 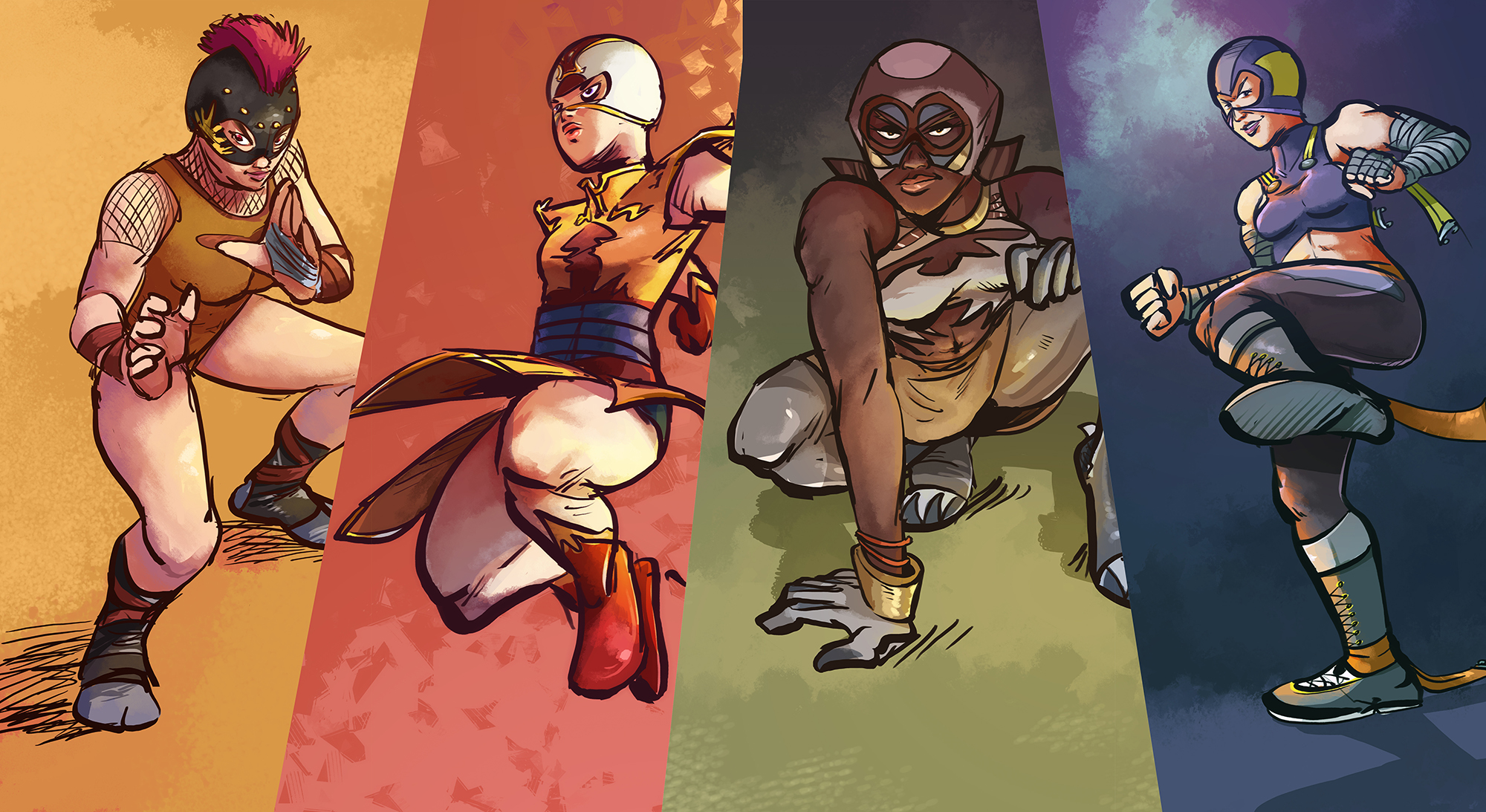 Since there now was enough content to start showing, I built a trailer off the current version of the prototype, and started working on the last remaining unknown of the game: the "one vs. many segment".

This part of the game was intended since the original pitch, pitting Honey against opponents out of the ring, and was meant as a throwback to beat'em alls like Streets of Rage 2, using depth movement, in opposition to the single plane available in 1vs1 fighting games, and the match segment. It was, however, also intended to be a "test arena" for the player to gauge their skill against opponents, to see if they were ready or not for any upcoming match. The two designs were at complete odds, and the first prototypes of this segment, a complete mess. Because I had no clear idea of where I was heading with that segment, I kind of left it up to when I would have no other choice but to tackle it. Eventually, out of options, I tried using the match systems I had developed, and simply pitting Honey against multiple opponents on the same plane. 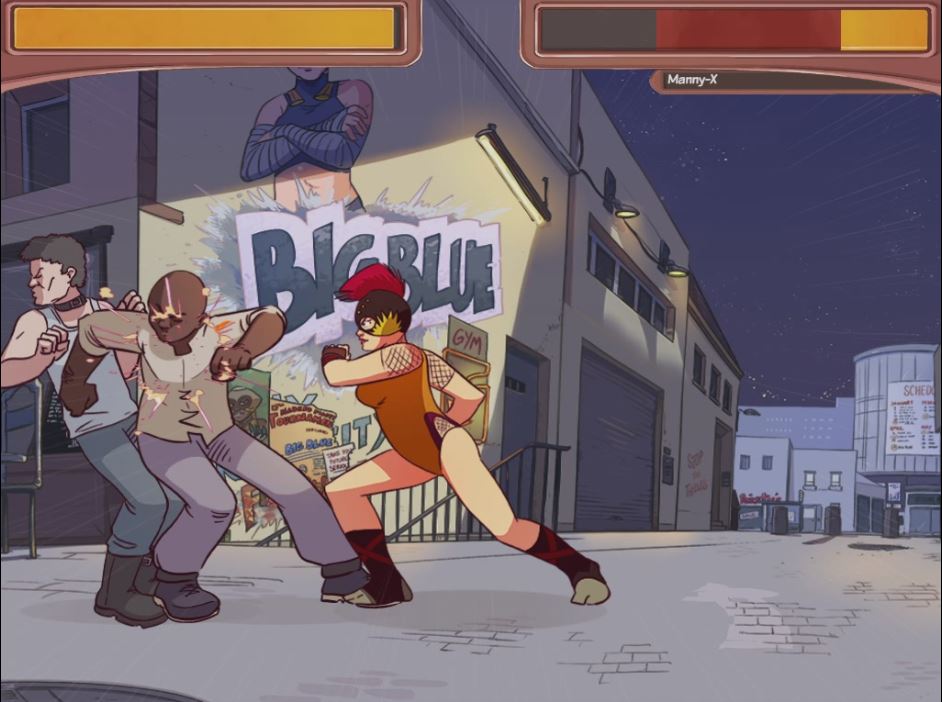 And thus began 2016, with the goal to complete the game sometime during the year. The todo list was simple:

Which really meant finishing the one vs. many segment, complete the visual novel script, and finish the remaining planned matches for the game (which somehow grew from 3 in the original design, to 6 in the actual game).

Cue February 2015, with the completed one vs. many segment:

Leaving the script, and the matches as the biggest challenges yet to overcome.

Cue March 2015, where I decided to overhaul once more the visual novel system, and add typewriting text effect, in addition to writing the rest of the script:

We are now in April... and I'm hoping to finally release Honey this year as a fully fledged, feature complete game! What was once a wishlike idea has turned into a reality, with both the joys and turmoils this entails. Honey is now my day and night job, and I hope when the game is out, the entertainment it will provide will be worth all those sleepless nights! :-D

Huge thanks to Morusque, who agreed to partner with me on this adventure off a barely working prototype and a few ideas and whose contribution to the game have turned it into the experience it is today (seriously, just wait until you hear that soundtrack), to BrossUno whose input and commissions actually started this whole thing, and everyone who supported the game in one way or another since then. The game is still far from done, but I'm inching closer to the finish line with each passing day!

Thats insane! Your journey has let you through a long line of the goods and the bads.

This is practically the last stretch for you! Go for it!! :D

Thanks :-D It hasn't always been fun, but as long as the end result is, it'll have been worth it :-D