It's been three weeks since the last patch, and OH DANG have we got a whopper. This patch brings a huge pile of UI, UX, accessibility, and polish updates. Let's get in there!

It's been three weeks since the last patch, and OH DANG have we got a whopper. This patch brings a huge pile of UI, UX, accessibility, and polish updates. Let's get in there!

Keybinds. We have them. We have A LOT of them. We have so many that it started to cause problems, so we rebuilt the entire keybinding interface and the underlying code infrastructure. You know what that means? It means you can now rebind just about anything you want. 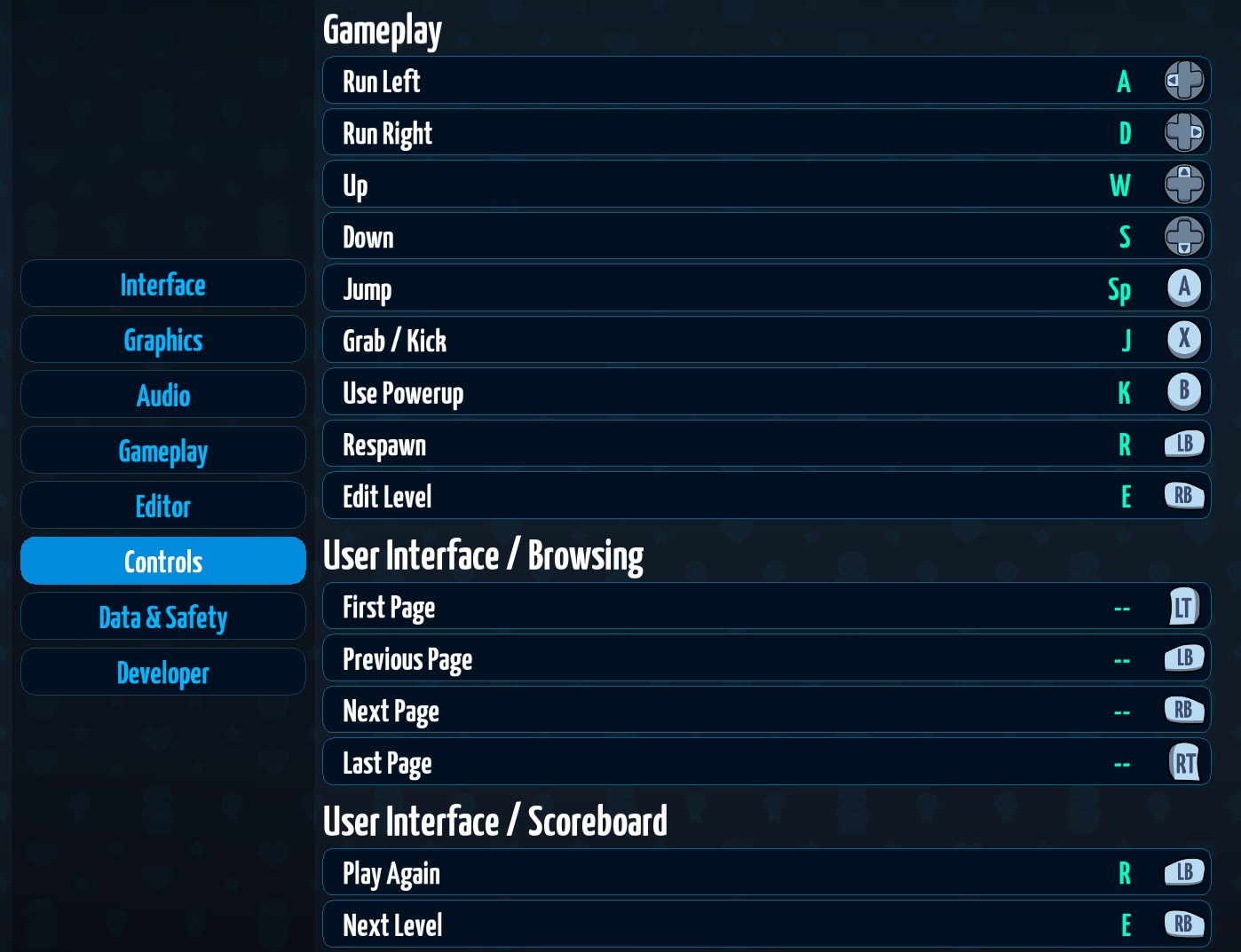 And you can even rebind your CONTROLLER buttons! REJOICE!

We're going to be doing some more work on the default Controller keybinds to make things work better in the editor and in multiplayer, so stay tuned for that in a not-too-distant patch. But whatever happens, you'll generally be able to rebind stuff to whatever you want anyways!

Colors! Some of us can see all of them, but some of us can only see... some of them. Since color can be used to convey a bunch of things in Levelhead, especially in puzzle levels, our colorblind friends have had an increasingly difficult time as we've added more color-heavy features.

We wanted to remedy that, so we added a Colorblind Assistance setting. This setting attaches icons to the major colors in the game, so you can easily distinguish colored Rifts, Arrows, and Hardlights. And we've baked those icons into Keys and their associated items, too.

If you have colorblindness and are having issues with other aspects of the game, please let us know via the feedbag, and we'll try to come up with a solution!

Time to UNBUCKLE YOUR SHOES, because this is going to be an incredibly smooth ride. We've updated several of the game's interfaces to be more obvious, intuitive, and take you where you need to go. OBSERVE!

If you did a search in Levelhead and there were no results, we used to just have an unhelpful message that said, "No results found." This applied even on lists like your own "Following" list, your Favorites, etc...

Now, if you have no results in one of these lists, we'll assume it's because you haven't engaged with that part of the game yet, so we provide you with a helpful link to show you where to go to get started on that thing. For example, if you aren't following anyone and you look at your "Following" list, we point you toward the Creator browser so you can find people to follow. 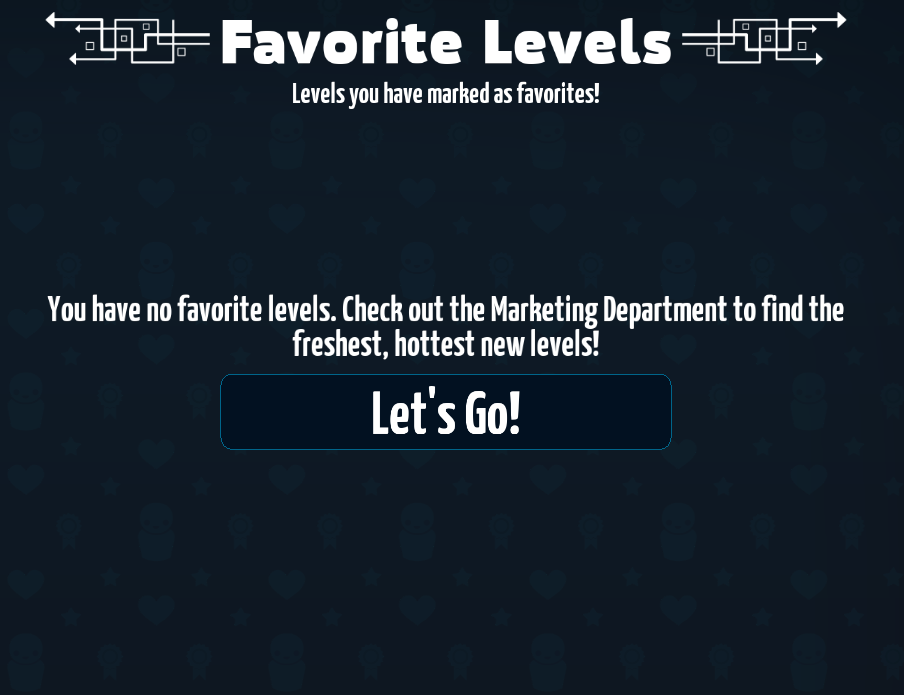 Instead of needing to click "Download" on a level before you play it, you can now just... play it. As a result, all level cards will just have a "Play" button. WOW! But don't worry! If you do want to pre-download levels before you go on a long plane ride, for example, you can just turn on "Download Mode" in the settings!

Our previous login method was a bit too involved, and as a result, a significant proportion of our players never logged in. It's not because they didn't want to, it's just that we never really made it obvious how, where, or why to do it. So, to get more of our players involved in the community, we've rebuilt the game's login flow.

If you boot up the game and you haven't logged in, now you get the login page right away! We also updated the visuals of the Login page to be more "Levelhead-y" instead of Rumpus themed, because there was an extra layer of confusion. "What is Rumpus? Why am I logging into it?" So, overall, this new process should get far more people to log in, and those people should be a lot less confused. 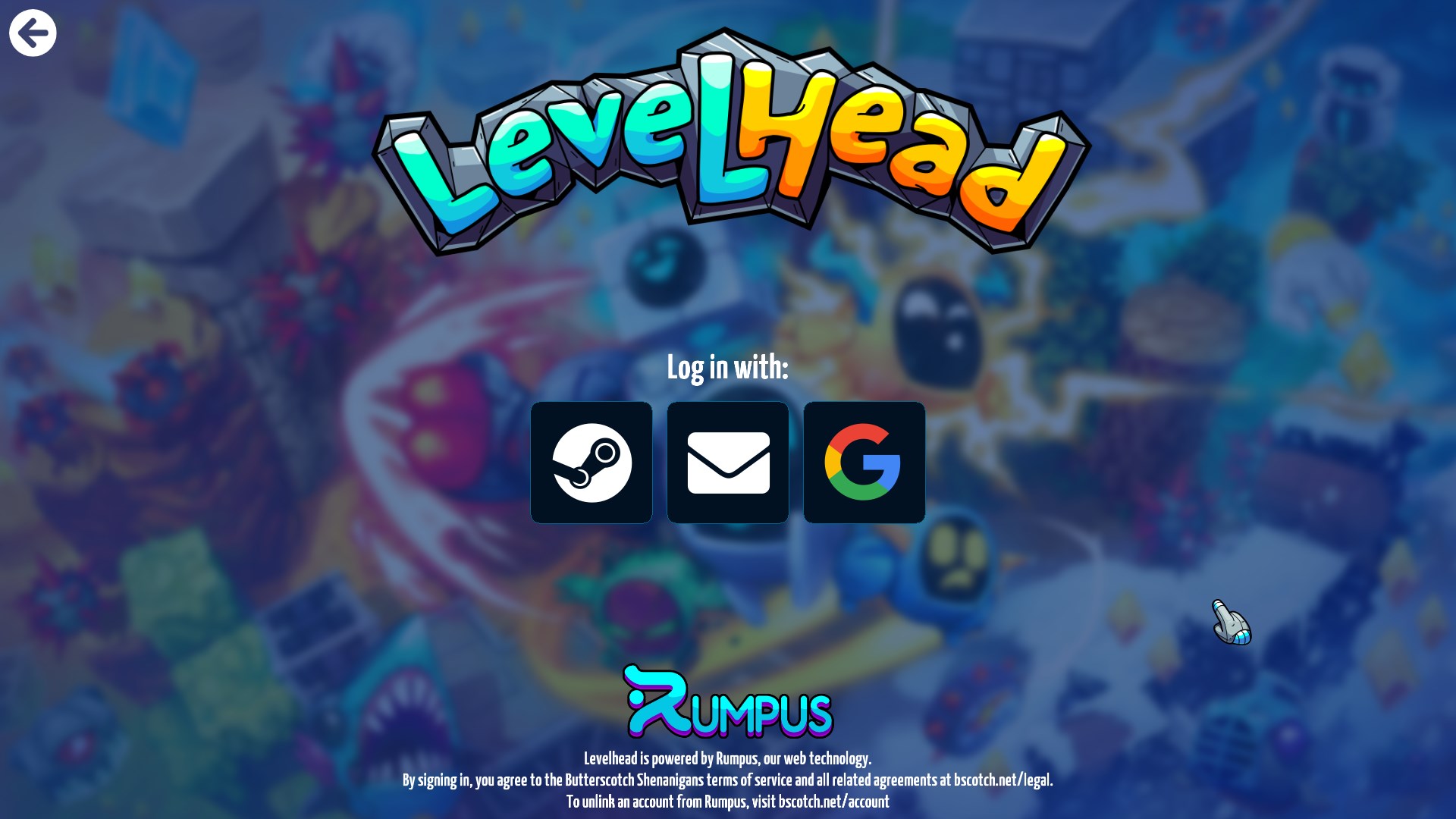 Also, when you first log in, you now pick your alias and your avatar. Say goodbye to the swarms of new players stuck using the Generic Employee avatar!

We're continuing to tweak the Tower's algorithms to make sure there is a nice variety of content in the Featured list and not just a huge number of five-star levels. Right now, things are swinging around a bit while we work to find that "Sweet Spot," but it's getting closer all the time! The result is that the Tower's "Featured" list is starting to generate a decent amount of play. Since the Tower is increasingly being viewed as where you go for "Good Levels", We wanted to make sure it gets even more attention, so we've updated the Tower to just place you directly on the Featured page as soon as you enter. 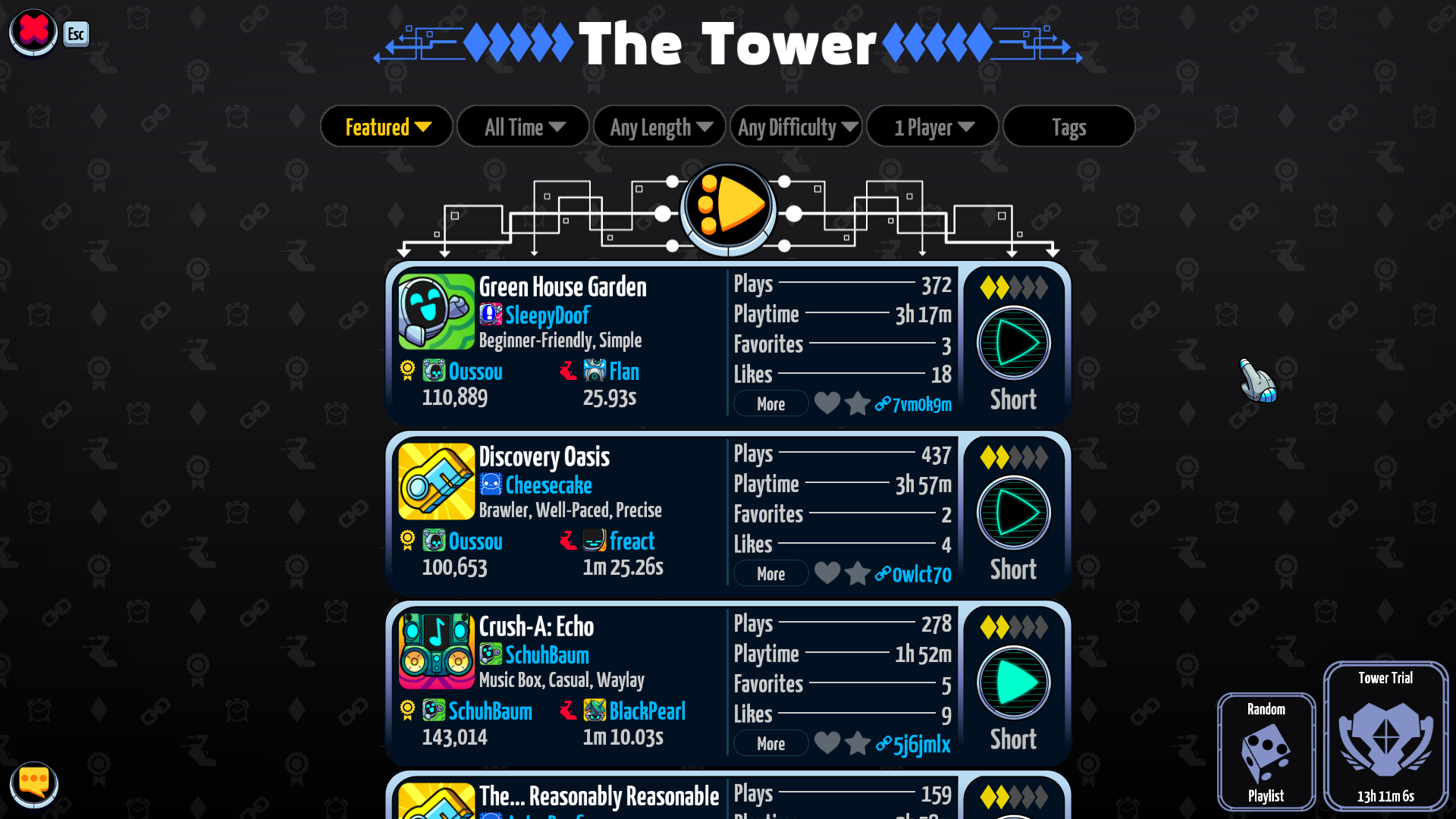 From this page, you can go to the Tower Trial or play a Random playlist. Oh, and speaking of Random Playlists...

Play Whatever You Want... Randomly!

Our original thinking with the Random Playlist was to make it truly random, and only allow you to bracket levels by difficulty. But after some further iteration, we realized it would be more interesting if you could pick whatever filters you wanted, and generate a random playlist out of that! 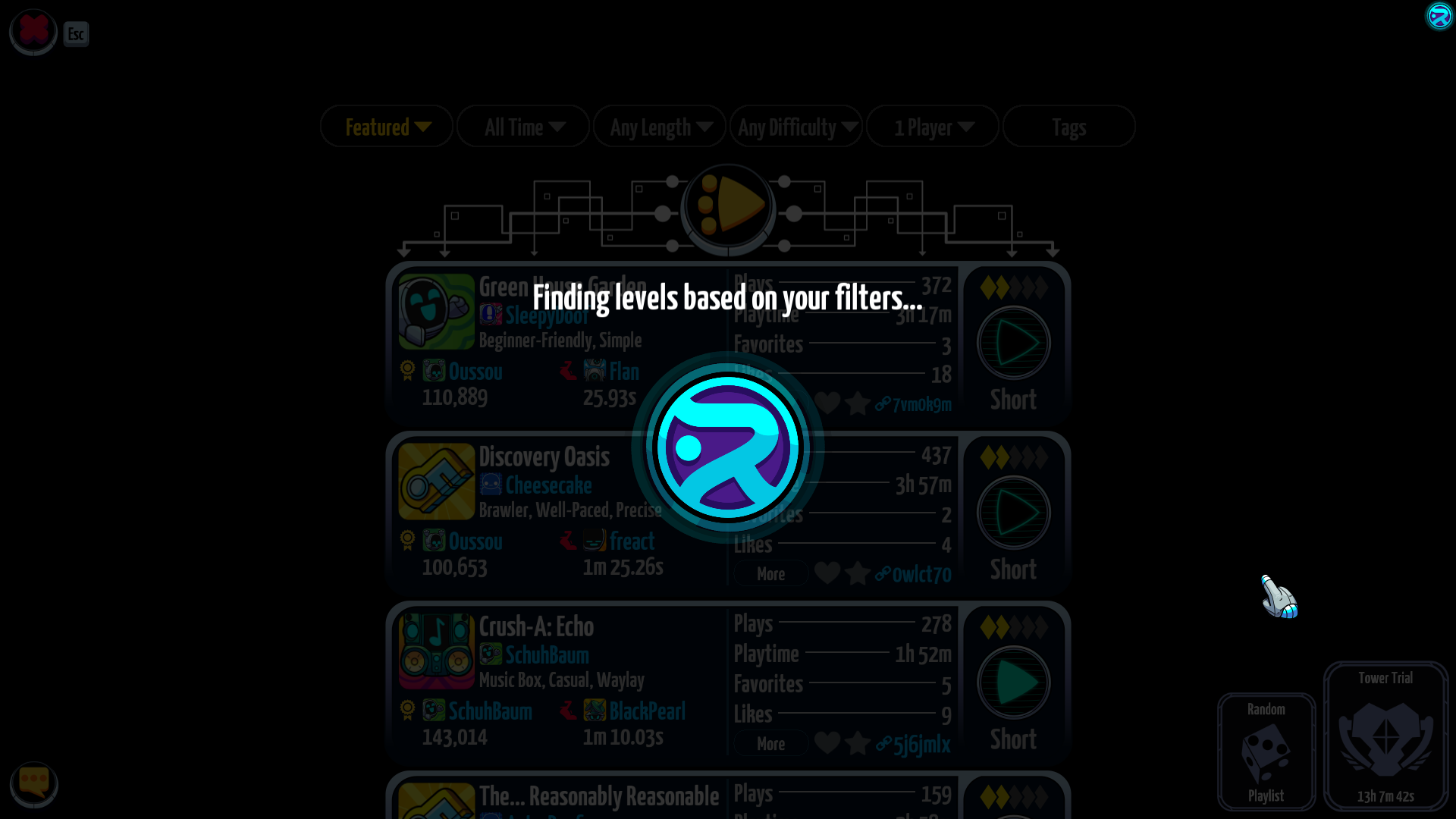 Now, when you click the Random Playlist button, you'll get a random playlist that matches whatever your filters are in the Tower. Want a playlist of just "Short" levels tagged as "beginner-friendly"? Or perhaps a playlist of "Troll" levels? Now you've got it!

We have four colors of GR-18 available for multiplayer, so we thought, why don't we let people just pick one of those colors as their main GR-18 color? In the game's settings, you can now make your GR-18's face Blue, Fuchsia, Gold, or Green!

Plus, GR-18 has some new animations for throwing things downward, and there's even a new flipping animation while sprinting!

We're continuing to iterate on the mobile controls and features to make sure the game is ready for a solid beta test in the coming... time. Many of these features also require separate tutorial steps or mobile-specific instructions, so it has been a bit of an undertaking. But it's coming along!

We'll have more news about the mobile version soon, as well as information on how to get involved in being a beta tester for it!

I gotta get out of here! Want to know more? Read the full patch notes below, or just come into our community Discord and say hi!

See you next Wednesday!