You’re familiar with the redneck, so maybe it’s time you meet the 'electrifying' Seth class...

Hi! I'm Bruno, Community Manager of Cremagames, and I'm here with the twentieth Immortal Redneck's devlog. Given that these past weeks I've shown you some 2D and some 3D art of the game, I thought I might talk about something more specific, like two of the first classes you'll play with. Yes, Immortal Redneck, as both a FPS and a roguelite, needs different approach to shooting, survival and skills, and the class you choose certainly set what you can do.

We have a very clear idea about what Immortal Redneck classes' have to be.

In first place, they are unlockables classes, so they have to feel like a personal achievement when you earn enough gold to buy them in the Literal Skill Tree. It might seem like a way of stretch the hours of play, but don't worry, we don't plan to make it unnatural: you unlock them as if they were new abilities, so you just need to spend some time and play good enough. 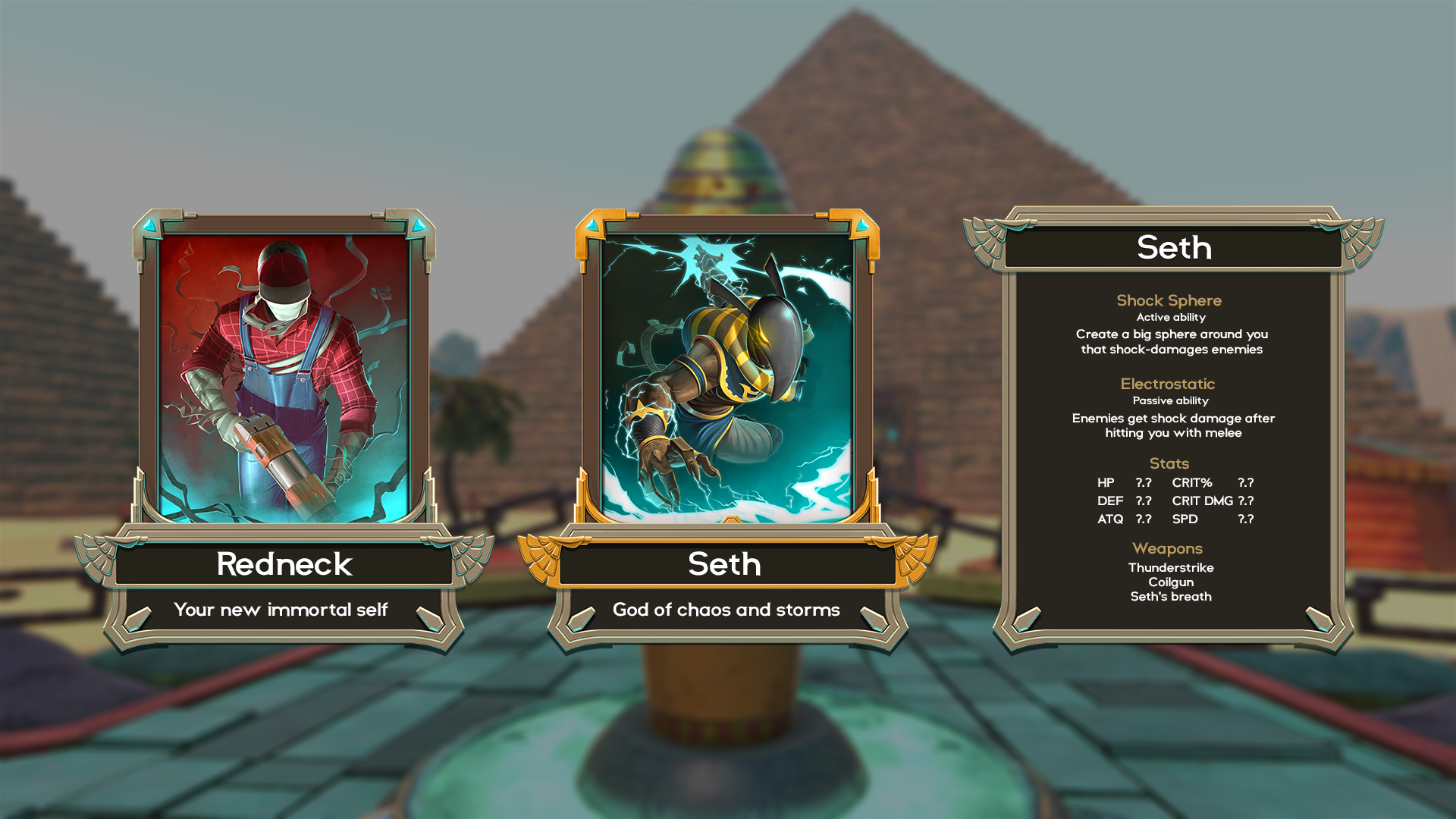 In addition to this, you need to know that you won't be able to play always with the same class. I understand that you might have a favorite one, but what's the fun if you don't try each one of them sometimes? There's fun in trying new things! Obviously, we are not so cruel as to impose one random class with each new run: we make you choose between two of them. This way, you might use one that's not your favorite, but that you also don't hate as much as the other one. Oh, you think two of them are not enough options? Well, there's a skill that let's you choose one of three...

And finally, as you might have assumed already, this classes are godlike blessings based on different deities. If you offer enough gold at the Sacred Tree of Life and Skills, they'll give you some of their powers (different stats), one or a few abilities (active and/or passive) and their favorite weapons. And each time you reborn in your sarcophagus, you'll have two of those blessings at your disposal.

Summarizing: you class will have a huge impact in the way you play, specially in the first minutes of each run. At this moment, there's a total of 9 classes, but today I'm only talking about two of them: Redneck and Seth

Of course the redneck is a class, damn it! It's the most basic one, of course, and does not have any active nor passive ability. It doesn't have any interesting stat configuration, either: they all rank in the middle.

This sounds bland for a redneck that cannot die and that has fights thousand of enemies, but, hey, it's just the standard character. It's strong, fast and their guns are also quite good. You know, sometimes the most balanced option is the best one, even if that means not having some special abilities.

You probably already know about the redneck basic weapons, but I'll show them again.

Grandpa is a handgun and a good balance between damage and range.

Mr. Tickles works better in short distances and makes a lot of damage.

And Dyna is a explosive that hits really, really hard, on contact with an enemy or in an area after a few seconds.

There's a lot of mystery around how our dear southern fella got his powers. We know how he got to Egypt –because he won a trip to Giza–, but how did he end up mummified and immortal? Where the hell is he exactly? And why do all these gods and goddesses care about what he plans to do?

He is after the answers to all these questions, whether those responsible for his curse want it or not. And it seems the only way to find it is by exploring and fighting his way through the three huge pyramids in front of him...

Seth, or Set, is one of the most well-known gods in the Egyptian Pantheon, and one of the first ones to welcome the redneck's tributes. After all, he is the god of foreigners. He reigns over chaos and storms, so earning his electrifying blessing is a good idea.

Some may say that he's kind of a jerk, but it's not like you can turn down any help the gods give you: they are really greedy and also proud. Even if he's not the most trustworthy deity, Seth's powers and weapons adapt to all kinds of situations and their shock damage could make a difference.

As a cunning warrior, Seth loves melee weapons. That's why he hands you over his own sword, Thunderstrike, a steel blade infused with lighting that's perfect for close combat situations.

Since he has no matter with most contemporary weaponry, he also concedes you the Coilgun, a rifle that projects pure lighting bolts that spread through the enemies.

And finally, there's the Seth's Breath, a direct hit of mythological, uh, halitosis that works like a flamethrower, but with electricity.

I can't show you this weapons in action yet – I'm keeping that for a another, really cool devlog –, but I can talk about the ability of the Seth class: the Shock Sphere. And neither that Thunderstrike nor the ability are final, but I had to show something about the Seth in movement!

Every time you use your ability, a bright sphere of pure electricity and magnetism will surround you and expand until it hits a certain distance. At that moment, the sphere will slowly decrease until it disappears. So, for a few seconds the energy of this lighting ball will hit with shock damage all the enemies.

And more to come

And that's it for today. Now you know something about the first two classes of Immortal Redneck. I can't insist enough on how important each one of them are going to be and how much will determine every run into the pyramids. It's not the same to fight your way with a handgun than with a sword, although I can assure you it's fun no matter what class you use.