For this update we want to keep digging into the combat of Bloom a bit more and give everyone a better idea of exactly what we are doing (and more importantly, why).

The Bundle in A Box went up! Bundle-in-a-box.com Looks like some interesting games they have lined up, so definitely worth a few dollars. Also, if you end up getting it, don’t forget to vote for us for the indie dev grant! ;)

For this update I want to keep digging into the combat a bit more and give everyone a better idea of exactly what we are doing (and more importantly, why).

From the outset of designing the combat mechanics we knew we wanted to capture that fast and satisfying combat you find in old school games. The thing is, we weren't happy with just taking mechanics from the past and repackaging them (nostalgia is great, but there is plenty of room for taking these things further!).

We also wanted a type of game that is just “fun” (a mysterious and hard to quantify attribute) and doesn't grow old easily. You know, the type of game that you don’t just throw away when you get to the end or that grows old once you figure out the pattern or ultimate combo that trivializes everything. This is the type of combat you find in older school games, your Castlevania, your Metroid, your Mega Man, even in your Mario’s.

What is the Secret?

So, what exactly is it that makes these games so long lasting? How come we can come back to them so many years later and they are still pretty fun? Basically, each of them has the same “fun” combat that can keep the player on their toes. It is a balance of dodging and attacking which keeps the player engaged, but beyond that, it gives the player a CHALLENGE and makes you work a little bit. We are keeping these things firmly in mind and applying them to make sure the game provides that same level of satisfaction and intrinsic value as you play (basically, each element of game play is fun in itself, instead of us forcing you to jump through hoops to get a story treat or new item).

But again, this isn't about blindly copying the past (as so many seem to do). Our philosophy is to pick apart the WHY, and then try to push it forward and bring it into our world even better. Is the secret to “The Legend of Zelda” the sword and board? Or is it the simplicity and mechanic of needing to time close combat attacks?

How we do it in Bloom

We covered this a bit in the last update, but for Bloom this translates into a heavy emphasis on an ebb and flow combat system. You will be attacking and have access to a range of powerful tools, but these attacks are draining on your life and causes you to need to switch back to defensive fighting to recover. This defensive fighting will require a combination of careful dodging and blocking to survive your weakened state and the enemies left from your first attacks.

Combine this with strategic bonuses to staying near one point or balancing between short range and long range attacks (which we covered with the Bridge and the veins), and suddenly you are left with real choice during battles that can shift moment to moment as the fight evolves.

Another key aspect is our focus on simplicity in our design, while also offering greater depth to game play. Contrary to popular believe, simple design doesn't need to mean shallow game play. An example of this is seen in your very first two abilities in Bloom.

The first ability we created was a short range and light damage pushing attack (the one you see in the video). After we created this we found ourselves faced with a tricky situation that the character lacked a good offensive option. Making this short ranged attack higher damage would have meant players could just use it all the time and ignore all the other abilities in the game... but creating a completely separate ability and throwing it into the 2ndary abilities would start to bog down the design and make things a bit messy. 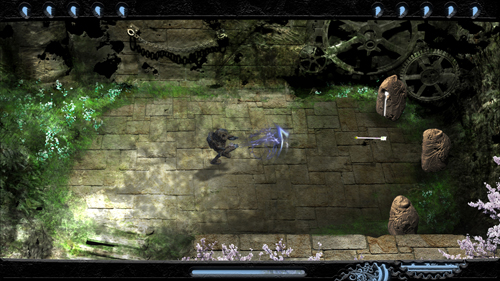 So, we thought a bit and the pretty obvious answer was to simply added the ability to charge your attack to transition it into a longer range and more damaging (along with higher draining) attack. Having this on the same button as your main attack streamlines the design but offers more depth in how you fight. Eventually, you even get a 3rd version of this main attack! Again, with a completely different strategic advantage (at the cost of more energy and time to charge to that level).

This is what we mean by simplicity and is something you might recognize from games like Mega Man (or many games since then). The difference here is instead of blindly upping the damage for a charged attack (as most do), the function here completely changes to offer the player different options in how they fight without encumbering the design or flow of the game.

Pattern recognition and discovering enemy weakness is another big issue which greatly reduces replayability in games. While an enemy that charges at you and is seemingly unstoppable is really fun to fight for the first time... when you discover all you need to do is sidestep it into a wall, suddenly from then on combat is a chore and you become disengaged. This is true for any enemy in the game, if you can uncover their pattern or learn their weakness and they suddenly aren't a challenge, it is bad design.

We plan to go the other way with this. We treat enemies more even handed and make their tactics a constant challenge (even if you know exactly what they are going to do). Knowing that an enemy shoots three arrows in a fan pattern doesn't make it any easier to dodge; the challenge is in tracking multiple enemies while predicting their attacks. 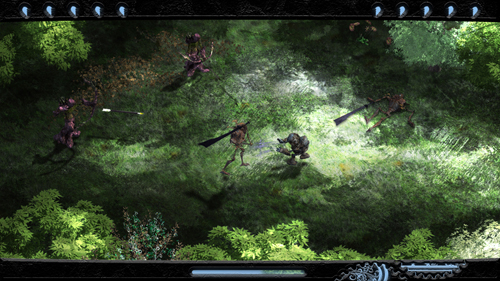 Basically, we want combat to be fun! We want it to challenge you, to make you think, and to be something that you will want to come back to (even if you don’t really have a reason to do it).
Anyhow, hopefully this gives you a little more insight into where we are coming from. As heavy gamers ourselves, we are drawing on a lifetime of experience as we move forward and trying to make sure Bloom captures that “magic” so many of our favorite games had. We don’t want to copy the past, but we definitely want to learn from it.

This looks fantastic!
I love the attention to challenging combat, which is often overlooked by other developers.

Thanks :) Yea, I think the industry is afraid of respecting their player-bases and there is so much hand-holding (even in just how most of them structure their tutorials with popups about everything. It is patronizing.)

We love games and grew up playing them... so Bloom comes from there, not just a "widget" to haphazardly produce before jumping to the next.