This article outlines some of the features of Muffed's custom game engine, why we believe they're important, and why players care about them.

When we set out to create what is now Cymatically Muffed, we had already created a VERY different game with a lot of flaws. We also play a lot of games and take note of things those systems do (or don't do) that bother us. Creating a custom game engine, we knew we would have the power to make our system behave in whatever fashion we believed was best. So, we committed to quality features at the lowest levels, giving us a strong foundation to build on.

Cymatically Muffed was originally a 2D platformer. A single-player-only experience all about point-and-click teleporting. While the narrative/theme/etc have largely carried over, the core gameplay and experience has been entirely rebuilt from the ground up.

This is because the old version was sort of a slapped together project that we were building in our spare time. It had a super clunky level editor that could only really be used by us, its input was a bit laughable, and each level took weeks to design and implement into the system. If we wanted to make a quality game, it was clear something needed to change. There were some other variables that pushed this change into motion, as there often are, and we decided to commit. We scrapped the old system entirely, and decided to re-create Muffed from the ground up. This time, we approached it like designing solid software, and let the game follow. The result is what you can now find on Steam. The following are a few of the core ideas that we built our new system on.

Input in any game is SUPER important. It is the method in which the user interacts with the software. So, it needs to be done right. Muffed's input is intuitive and accessible. Even unexperienced players can usually pick it up and get comfortable within just a few minutes. We wanted to make sure that even though we were creating mechanics that were fairly complex, similar to most first-person shooters, anyone who knows how to use a controller could just pick it up and start playing. To this end, the game has fully customizable input assignments, and native-support for a ton of different devices. You can even play Muffed with your phone. You probably shouldn't, but you can.

Muffed will render device-specific input glyphs and icons for a wide variety of devices. This helps to remove the gap between the player and the gameplay. For example, in most PC games today, if you wanted to use your PS4 gamepad (DualShock4) you'd likely have to run something like DS4Windows to get your DS4 to map to a virtual x-input device. Then, during gameplay, you'd see things like "Press A to jump" even though your controller doesn't have an "A" button. This may not seem like that big of a deal in concept, but as most anyone that has experienced this can tell you, it's one of those small pressure points that can really roughen your experience.

Drop In / Drop Out

This one is really important to us. It's annoying to have to "join" the game for each match that you want to play. After all, it's unlikely the collection of people on your couch has changed from the last match to this match. Therefore, in Muffed, joining and leaving the game happens at the system-level. You can hop in or out at any point. Whether you're starting up a new match, changing game options, or even in the middle of a battle, any player can join or leave. Players can all join and pick their colors and such when the game begins, then never have to bother with it again unless they need to take a phone call or some crap. If so, they can just hold a button and hop out of the game for a while, allowing everyone else to keep on gaming. If you have that one friend who's always late, you can start without them and they can jump in whenever they FINALLY decide to show up.

Every group has that one friend that thinks it's just HILARIOUS to wobble around their analog stick and mess up the menu selections while game settings are being made. While this may not be annoying enough to actually hoof that individual out of your home, it's probably enough to warrant keeping them from doing it. By default, Muffed's menus are only navigable by the first player to join the game (the holy "Player 1"), most commonly the owner of the game. Of course, if you feel this is a bit harsh or just straight-up ridiculous, you can disable this feature in the Options menu. Additionally, you can disable other players' ability to pause the game too. Because, well, you know why.

Knowing this new version of Muffed would have competitive experiences, we wanted to make sure that the collision responses were super accurate. No blaming the game for derpy bullet wizz-bys that should have, or shouldn't have, hit the target. Muffed features advanced polygon-based collision. For those out there that don't know, most 2D games run simple rectangle-based collision. What this means is if you have a circular object and something comes across its corner, it will register a collision even though there shouldn't have been one. This is illustrated pretty well in the images below, so check those out. The gist here is that the game's collision is super-accurate, so you know that your competitive combat experience is skill-oriented, and not luck-oriented. It's really only meant for debugging, and will come with large performance hits, but those curious can actually see this for themselves in-game by enabling the debug options. This can be done by editing your settings.muffed file with a text editor. Just change the chunk that says "EnableDebugMenu":false to "EnableDebugMenu":true

Doing this will enable a "Debug" menu within the options menu, with settings to render collision polygons and such. 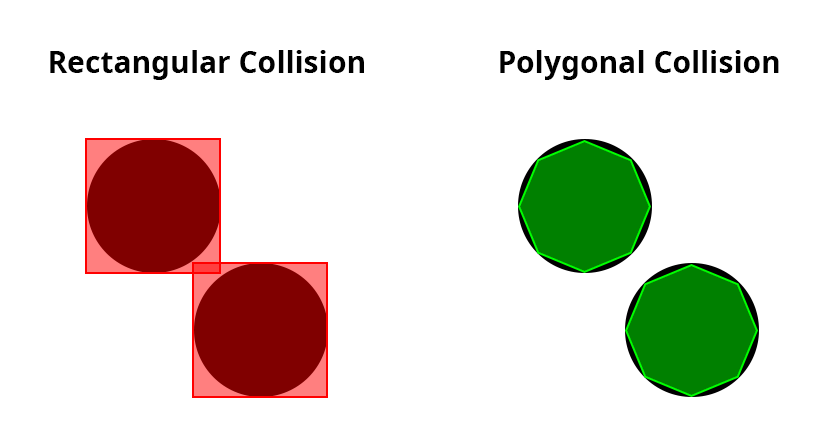 There's really nothing too special about this actually, but it seemed odd to leave it out of this article since we're talking about these types of features. Muffed uses a custom implementation of the A* (a-star) pathfinding algorithm to help AIs traverse their surroundings. This can also be seen in-game by enabling the Debug options. 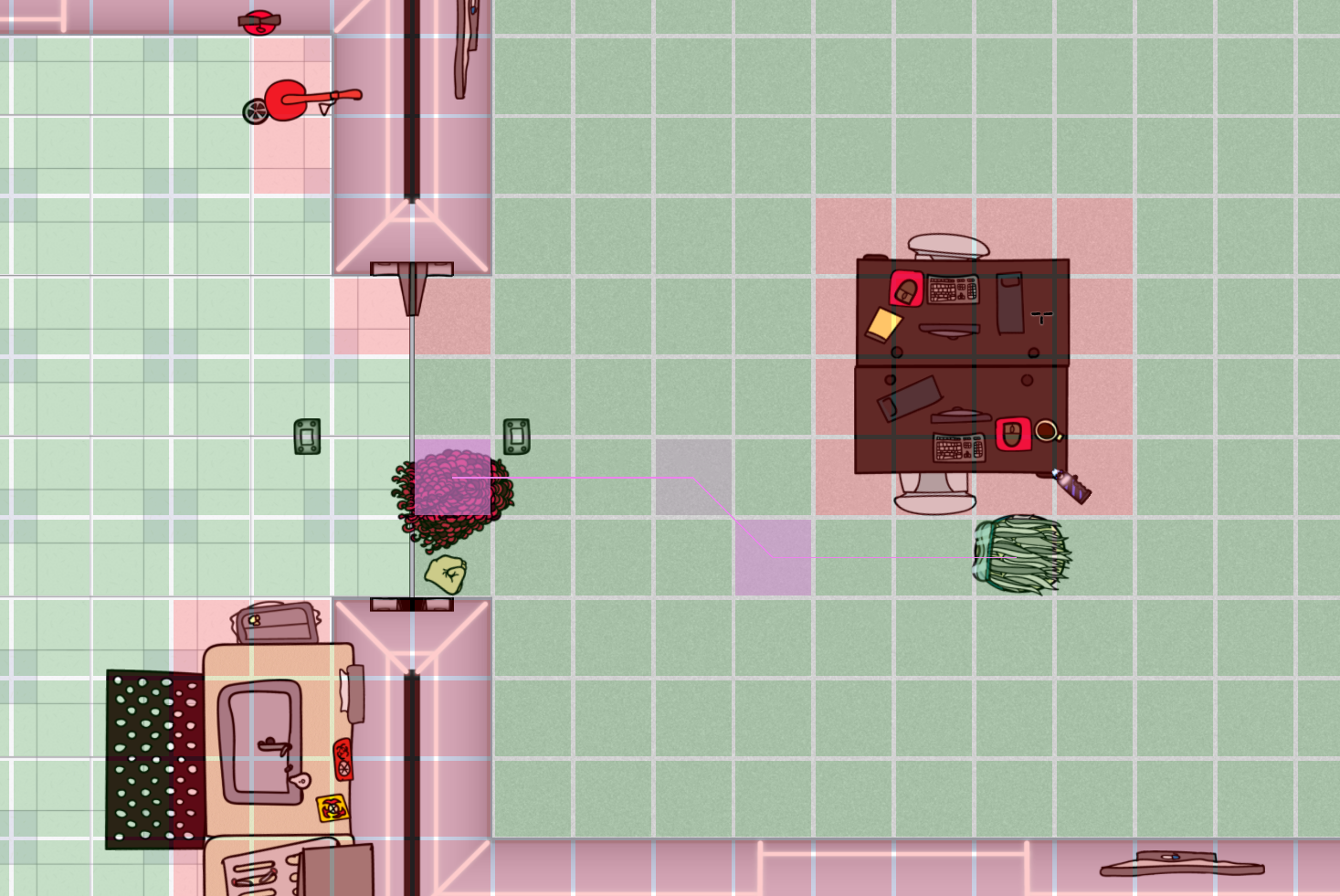 As PC gamers, this one really strikes a cord with us. It's aggravating to have a PC game where you can't customize your graphics settings. So, even though mechanically-speaking Muffed is just a little 2D top-down game, we decided we'd still treat it the same as we would any 3D-engine game. You can set windowed vs fullscreen, set your resolution, enable/disable vsync and antialiasing, the whole 9 yards (what does that phrase even mean lol). Muffed will run on pretty much any resolution that is larger than 1024x768, even on multi-monitor rigs. You can turn off particle effects and a handful of other features as well. The biggest point here is that it's all about "Power to the Players". It's your game, and your PC, so you should be able to run it your way.

You can even customize the way the local-multiplayer rendering works. You can use split screen (the default setting) or shared screen, and each comes with the power to customize how that mode behaves. 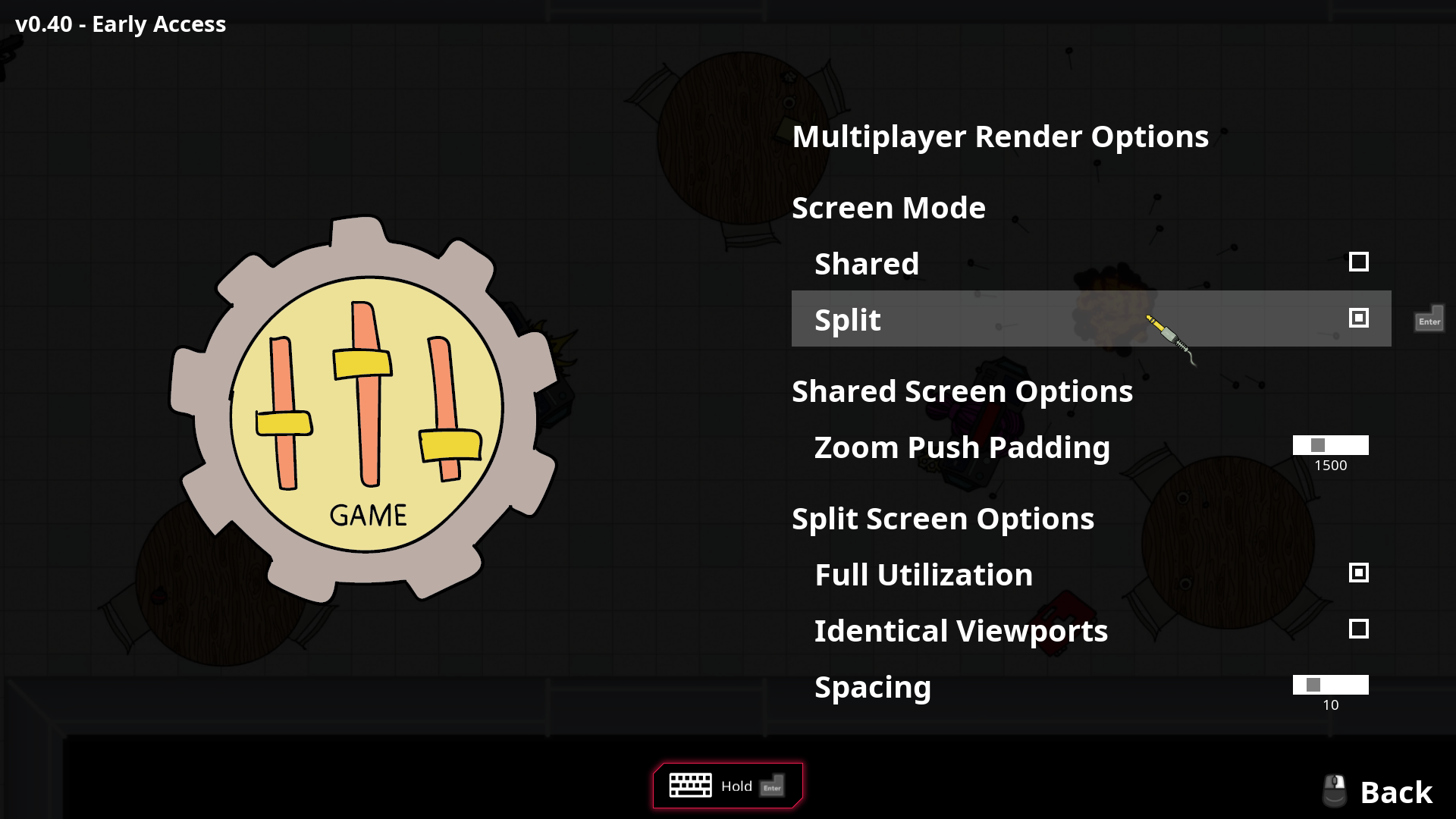 This is more of a big deal in relation to graphics settings, but as with all the other settings in Muffed, any of these options can be altered on-demand (even mid-game) WITHOUT restarting the game. Granted, it's not as though we need to load different texture packs and such based on these settings, as many games do, but this is still a big deal in our opinion.

Replayability, and bringing quality content in general, is super important to us. We're asking for your hard-earned money in exchange for a virtual experience, so we want you to be able to get as much out of it as possible.

The low-hanging fruit for this goal was the Battle Mode. Campaigns usually have a finite number of "fun" playthroughs, because you'll eventually learn exactly where everything is and how it behaves. Battle Mode, however, can be played over and over. Your experiences depend on your friends and the game's content ceiling. So, we've done our best to enable you to change up the Battle Mode experience with a ton of levels, weapons, and most importantly - game modes. The PvP experience in Muffed can be played as standard Death Matches (in various modes - stock lives, time limit, teams, etc), as well as a few other modes including things like Capture the Flag, Cops and Bombers (which is essentially just Counter-Strike Mode), and Puc (a hockey-like mode). Changing up these primary modes, as well as the many sub-settings of Battle Mode, you can ensure a fresh experience each match. 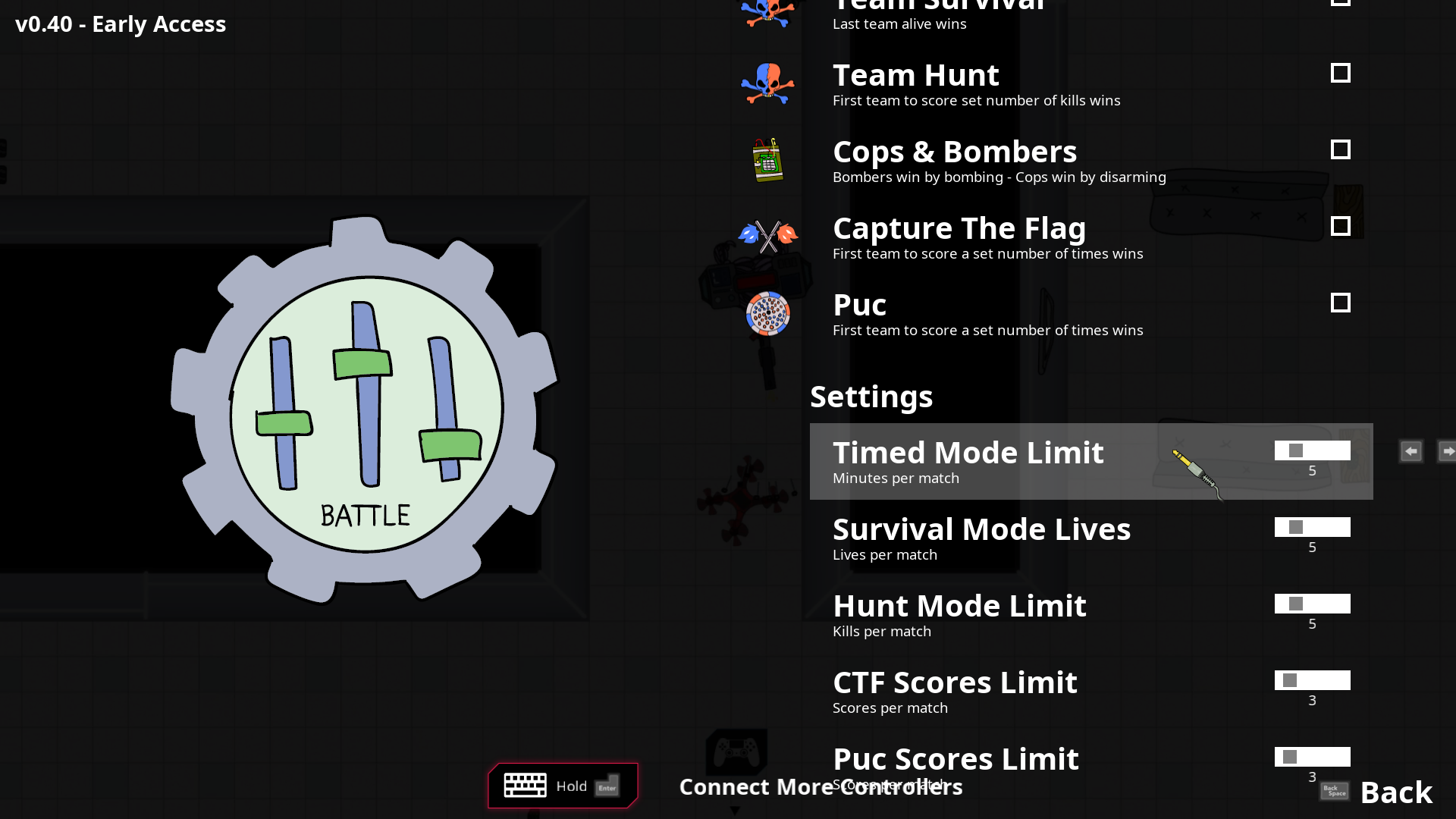 It's a bit outside the scope of this article, but also to this end, we've made our level editor publicly accessible. It runs right in your web browser, and you don't even need to own the game to use it. At least, until you want to test your levels ;) The level editor is designed to be pretty user-friendly, but, as with anything that complex, there are some parts that may need explaining. To find answers to questions about the editor, and even most of the gameplay settings, we've created documentation covering everything we thought might benefit from a more in-depth explanation for those confused or curious.

Using the level editor, you can publish your work to our server if you like. Other players can then download and play them. Published levels can be found in-game, in the Workshop section. We've really tried to do everything we can to go the extra mile with the editor as well. It's pretty tedious, but you can even use the editor on your phone (it is touch-friendly). This is useful when you just want to get some ideas outlined while you're away from your computer. For those that are privacy-conscious, you can create a user account without an email address when publishing levels to the workshop. The editor saves level data in human-readable JSON that you can download/upload locally without having an account at all. Again, Power to the Players :) 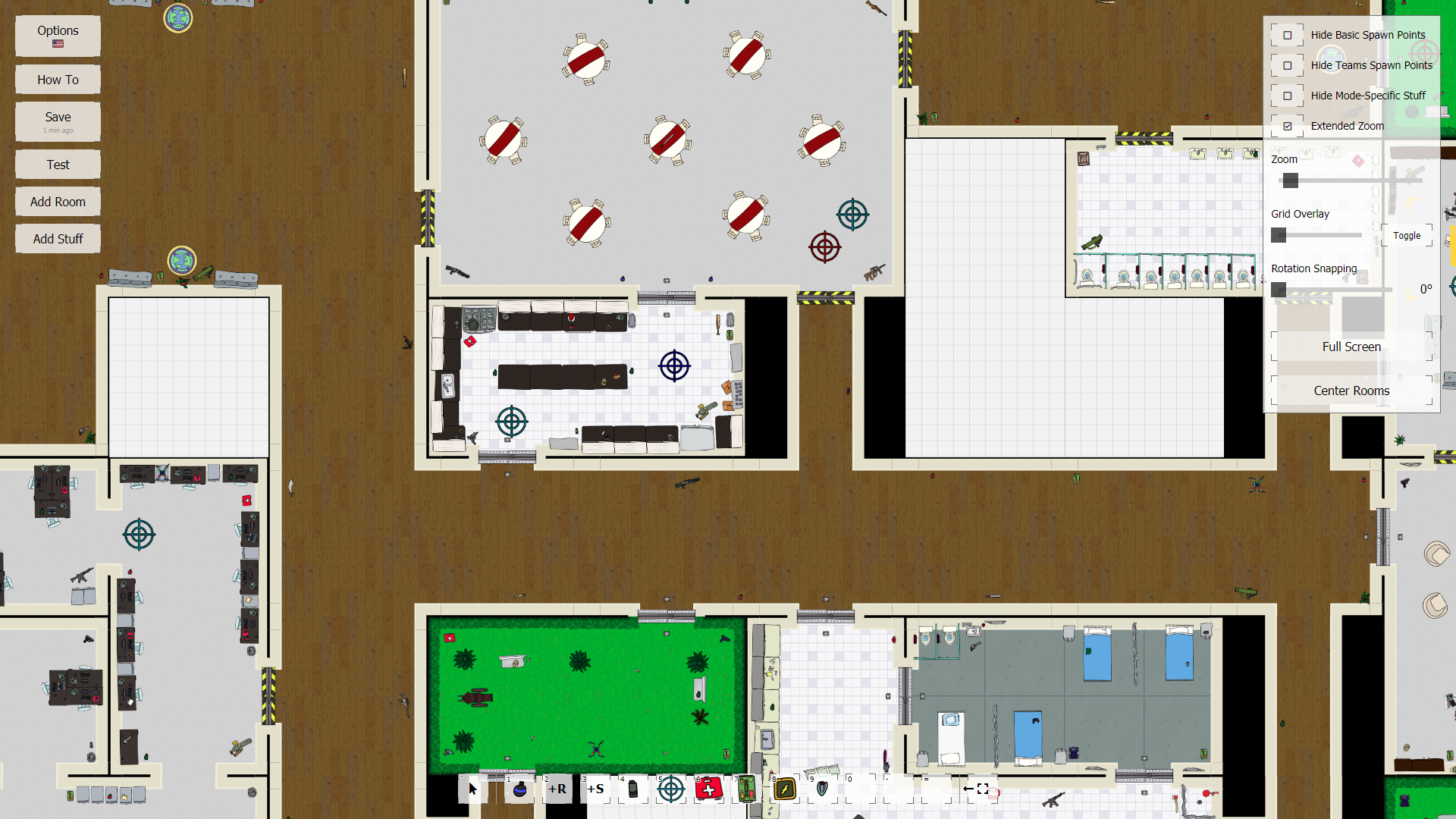 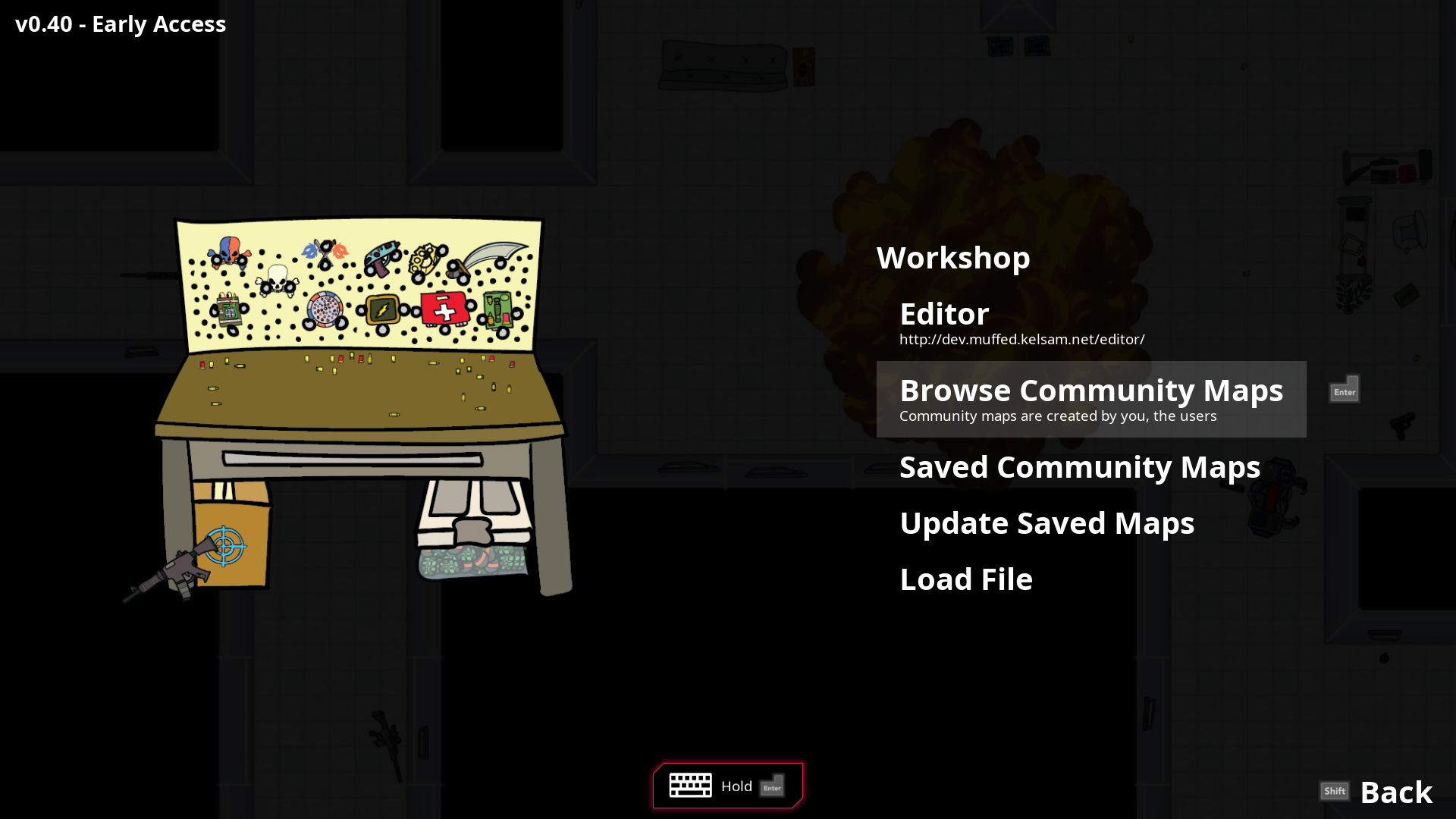 The game loads all assets when it is launched, while you see the "Cymatically Muffed" splash screen. It is small enough that everything can be stored in memory, so levels/menus/etc can be "loaded" instantly in-game, never slowing you down.

Hopefully through reading this article, you can see that we've poured all our passion into this game, and have made serious efforts to make it as good as it can be. Cymatically Muffed is available in Early Access on Steam in 9 languages, and is on sale all week, celebrating the recent release of campaign gameplay! 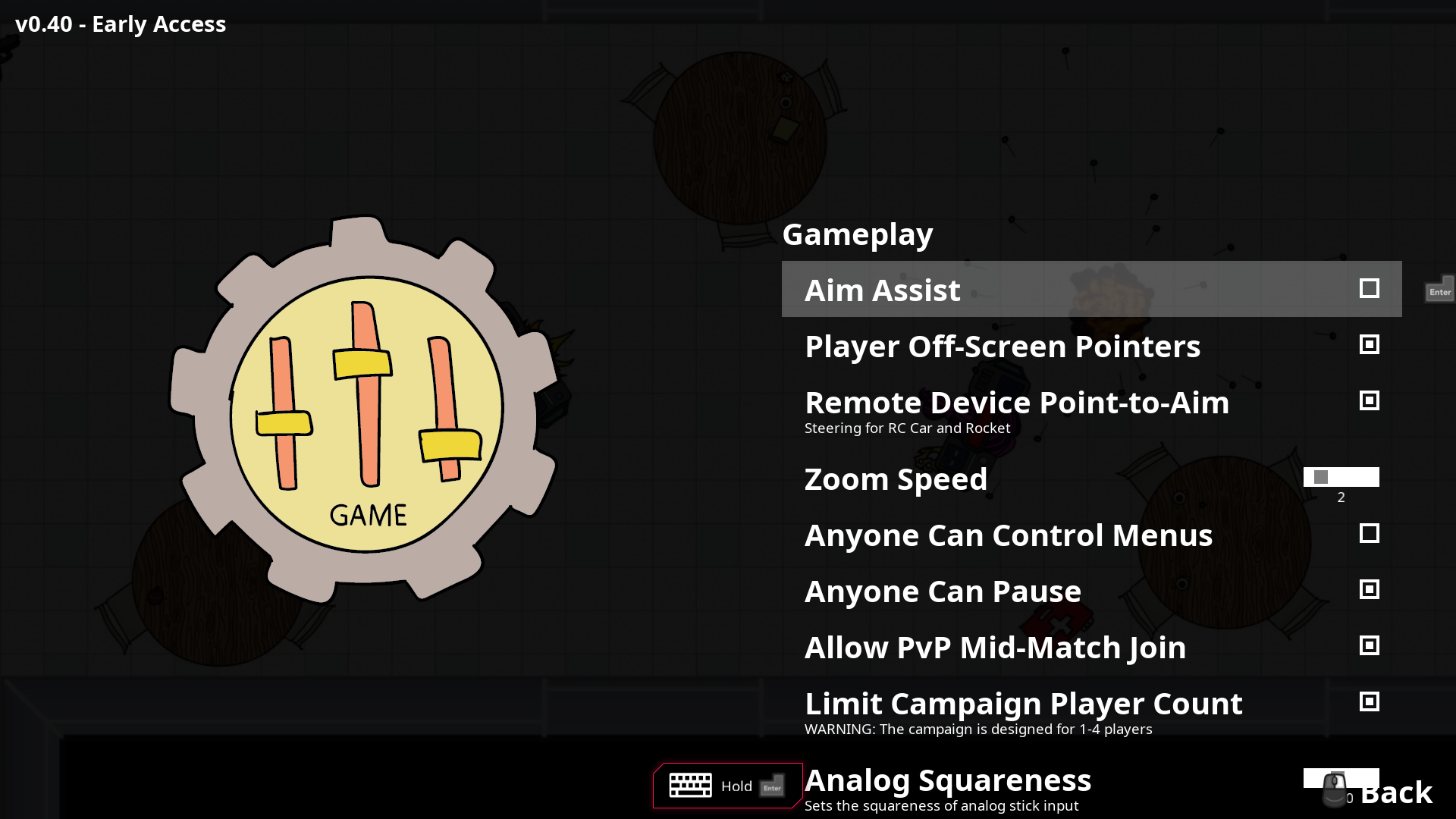