A detailed look at the first and last two weeks of a new Sci-Fi real time strategy / tactics game -- Starlink.

The story begins, as always, with an idea: wouldn't it be cool to have a game where there is a procedurally generated star map, and you get to explore it, discovering how the stars are connected, what resources they have, and fight other sentient races in the process?

I thought "heck yeah, that'd be so sweet!" and started prototyping things. Knowing that I wanted a game that would be perfect for mobile devices this time around, I kept the graphics pretty simple -- no fancy 3D at all. I created all the logic for stars, how they are able to create ships, how they are connected by hyperspace routes, and how the player can direct ships to capture other stars. Easy stuff. In just four days, I had this: 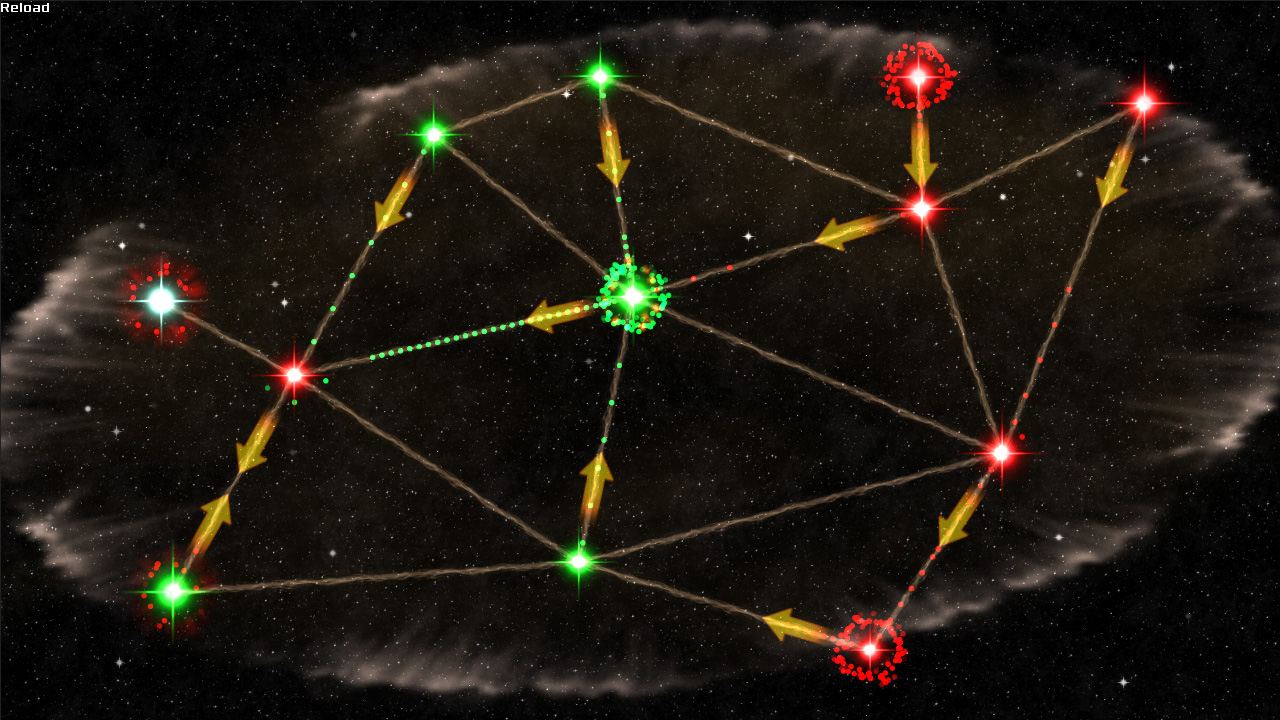 Now at this point the game had no AI and no procedural generation yet, but I had some fun playing with myself, controlling both factions at the same time. It wasn't until I built the game for my Android tablet that I truly realized that "hey, this can be fun as-is!" with two people sitting on opposite sides of the table, playing on the same device.

Of course there was no "winning" yet either. One faction could take over the other, but the game would never end. That was my first task to tackle after the initial play session. Two days later I had an actual 2-player hotseat style game with winning conditions and not-so-useful statistics at the end. 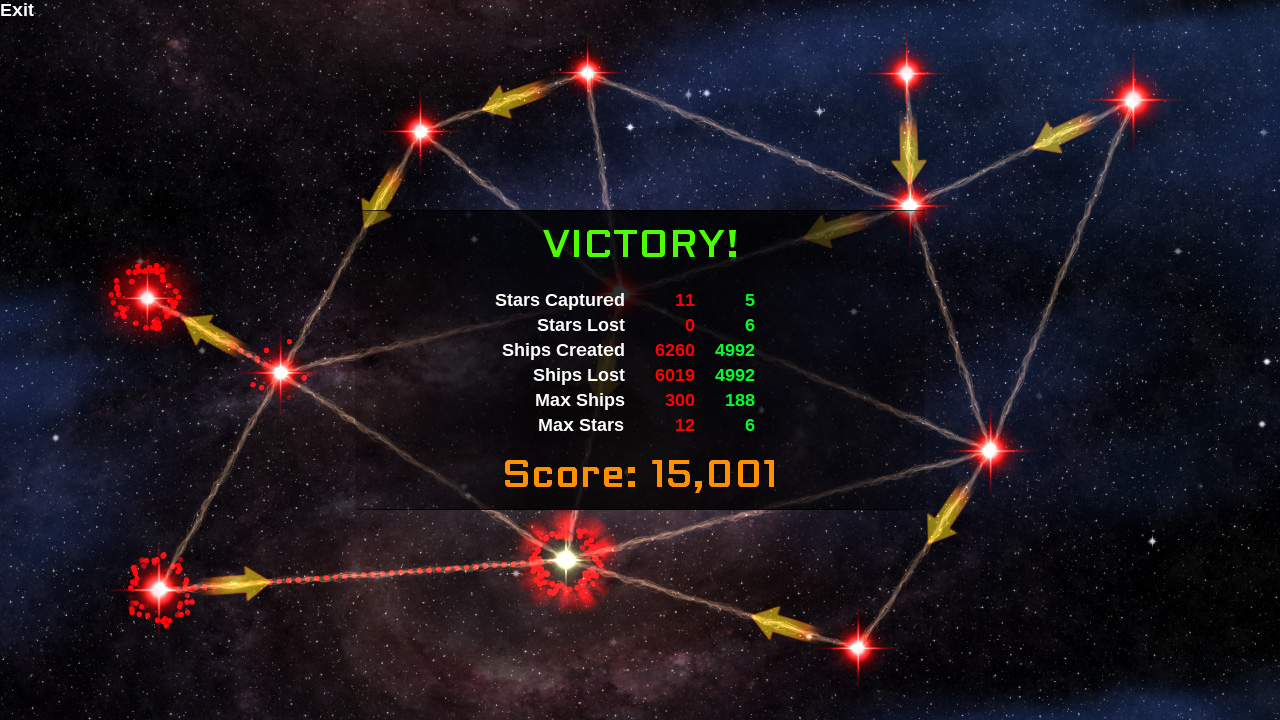 Fun as it was playing with myself, I knew the game needed a lot more to be fun for others, and so the next day was spent adding AI, as well as a simple fog of war. The game became far more interesting at this point as the galaxy was no longer visible from the get-go. The player actually had to discover it one star at a time. Now if only the map was actually procedurally generated and not static, eh? 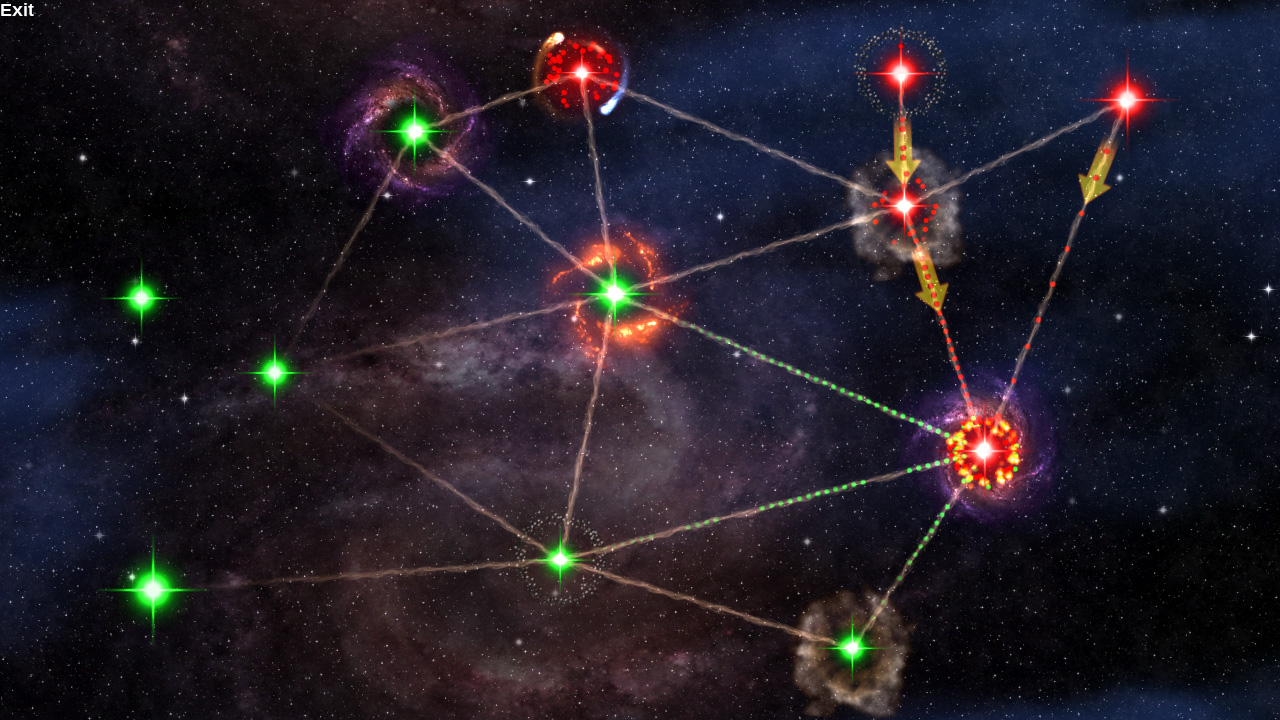 The next step wasn't procedural generation either. Not just yet. I decided to take a short break from development and focus on something more creative -- star anomalies. I came up with a bunch of anomalies that can be given to stars at random that would have positive or negative effects for that star. One would make it easier to defend, another -- increase ship production, and the like. The maps became less boring at this point as anomalies changed the playing field, creating choke points and strategic resource stars that must be captured first. 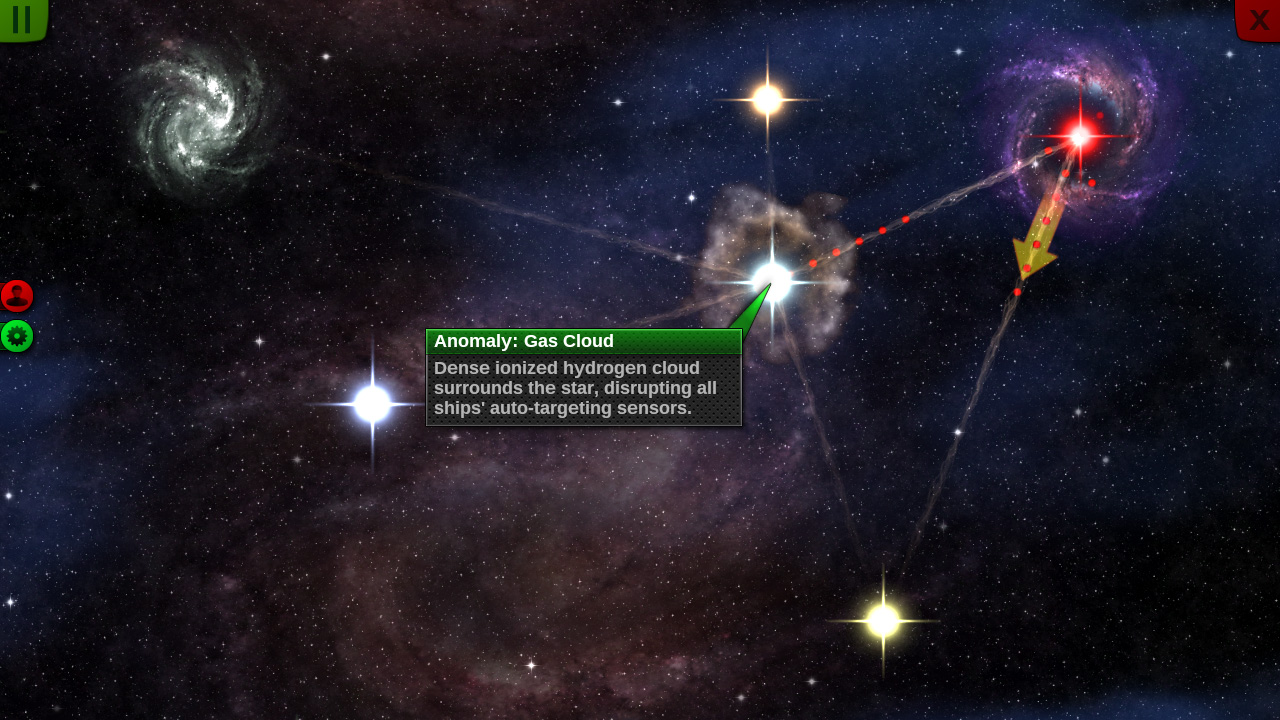 Going back to development, Day 9 was focused exclusively on multiplayer -- complete with a proper chat window (not that anyone would have time to use it during the fast-paced matches!). I think I spent half of this day playing... er.. "testing" the game with friends. It was a very fun and useful session that revealed a lot. Apparently the game was too easy to "turtle", where neither side would have an advantage. Hurr. 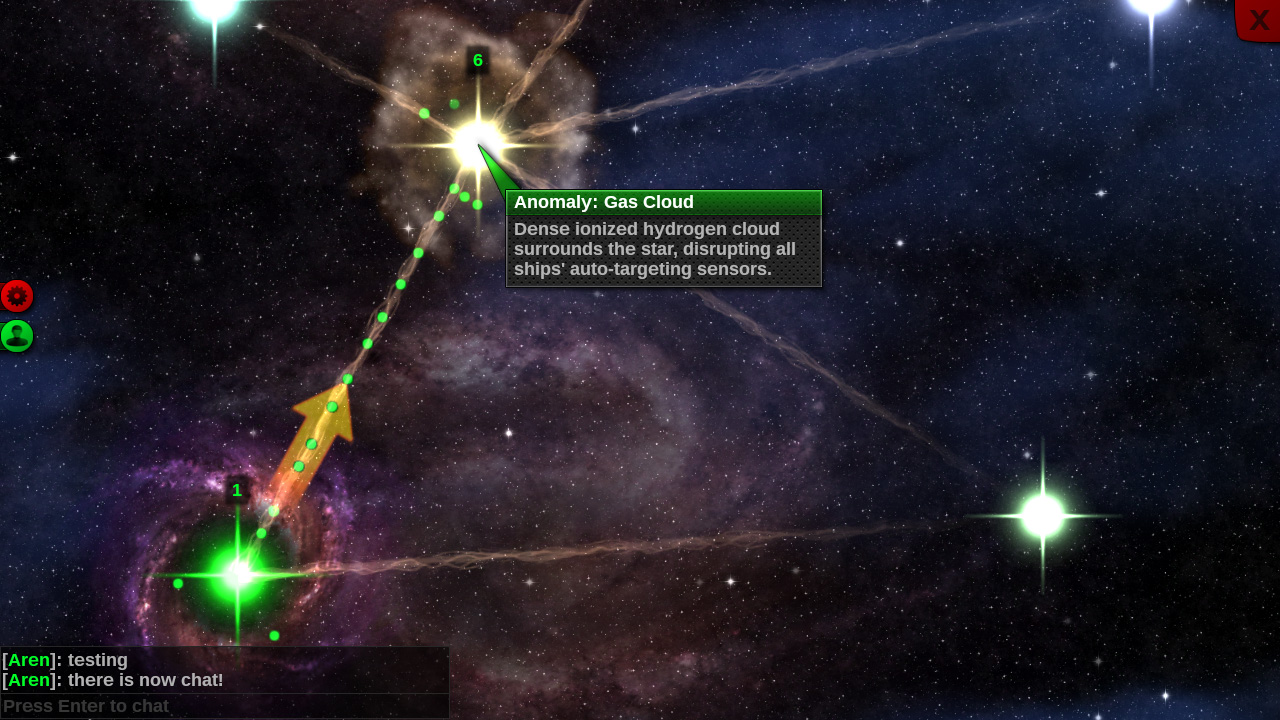 On the bright side, the following day's work was obvious -- I had to add abilities (which I originally called "cards"). I figured -- stalemates will happen, but if there was some skill the player could use to break them up, and if this skill was on a long cooldown timer to make it balanced... it might just solve the problem quite well. One day turned into two... but the skills were a-go! 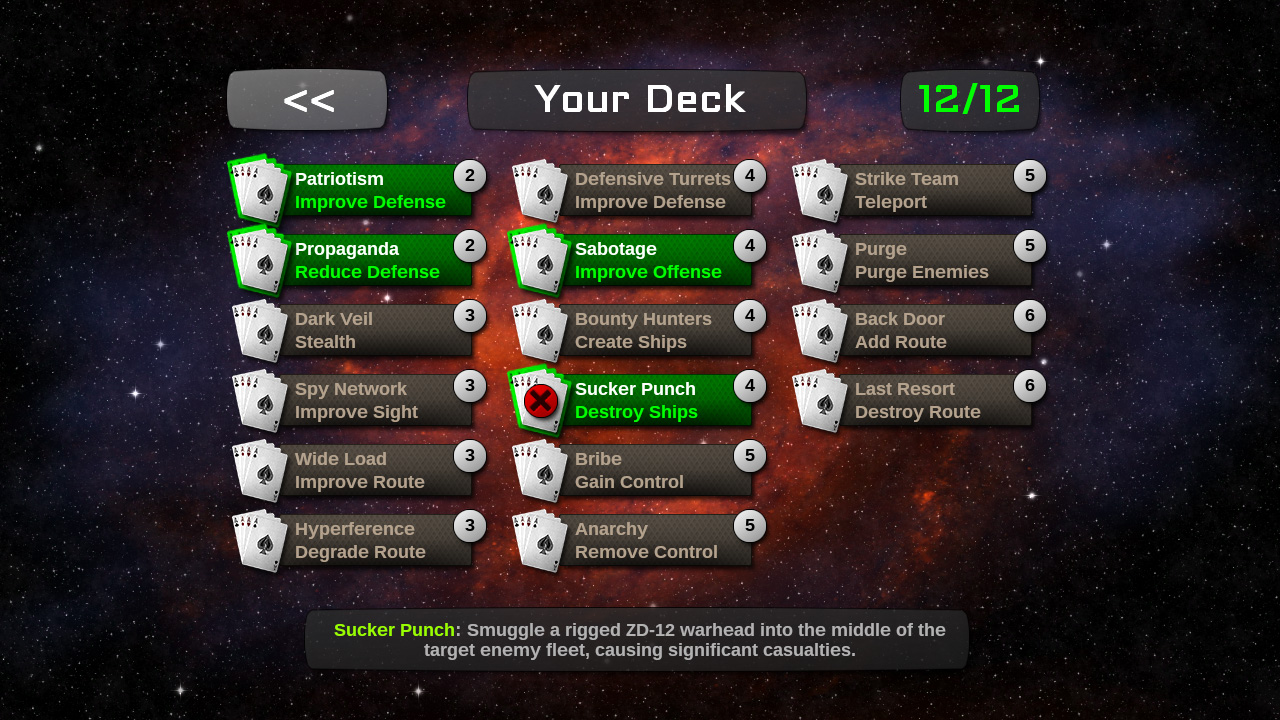 The games became a lot more fun, and far less predictable. Each player could choose their own set of abilities to bring into the match -- and the opponents wouldn't see what they were until the player actually used them. It's at this point that I decided to finally add procedural generation to the star maps, instantly boosting replayability factor by several orders of magnitude. Adding a third faction was a simple task as well, and the game became 2 vs 2 vs 2 -- supporting up to 6 players in total. 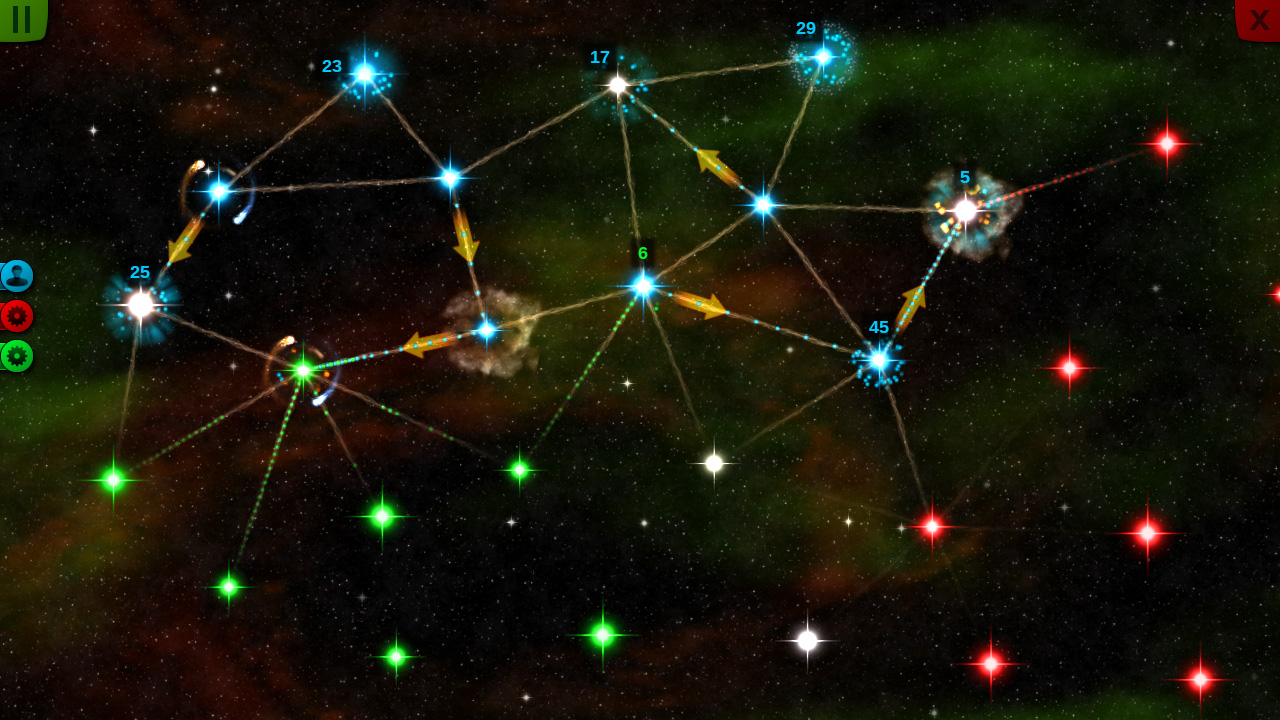 I spent quite a bit of time playing the game with friends at this point -- finding bugs, fixing them, finding more bugs... Fun times. Since the game had no timer limit on it back then, at one point I had a match last 84 minutes before we finally won a co-operative game. That was pretty... epic, I have to admit. And tiring. Very, very tiring. The AI really put up a fight in that one. We circled the galaxy taking each other's stars twice over!

And so ended the first two weeks of heavily-inspired development. Holidays came to an abrupt end and it was time to focus on work-work again. Oh well. I am pretty sure I spent more time playing the game than I spent making it over the following two and a half months -- which is actually good sign. And yes, it took me those two and a half months of evening-and-weekend work to get the game to a point where I would consider it to be "gold".

The last kick in the right direction was GDC. I ended up spending quite a few hours playing the game cooperatively (and competitively!) with random people... After all, it's one thing when the developer believes the game is fun, but when others do and spend hours of their important time proving it... well -- that's the real "gold" right there.

And now the game is done-ish. It features Internet, LAN and Direct IP multiplayer, leaderboards and statistics tracking, progression with experience gain leading to ability unlocks, difficulty levels for AI (and oh man were the "easy" difficultied needed!), a variety of procedural map generation presets for different kinds of maps, and 6 different factions to play -- whether cooperatively with friends, or against them, and a variety of interesting abilities that can be combined together for even greater effects.

But despite all that, at its core it's still the same simple game it was in the first two weeks of development -- a multiplayer (ideally cooperative) game to play with your friends using (but not limited to) mobile devices.

If you are curious enough to check it out, you can find it on Google Play, or play it freely right in your browser: Starlink.tasharen.com

Stand-alone PC/Mac/Linux versions coming soon to a Desura web page near you...