I'm aware of the reported bugs with diplomacy in the first version of patch 3.04. However, there wasn't anything I could do about it since it was a problem in V2 itself. For the upcoming version of HPM though I managed to pin down a few problems.

The first one and quite an old one, a ghost CB bug. It happened in every game: NGF and then Germany formed and they were never, ever, able to ally with Austria/Austria-Hungary because of a casus-belli. The problem was caused by a humiliation_unificaiton CB given to Austria when NGF formed. The CB was invalid but Austria kept it anyway, for some reason, forever hating Germany without having a CB on them. That's fixed for now.

To the left, the old problem. No CB given but the -100 modifier was always there.

To the right, the xied problem.

There's a few more problems, mainly dealing with rebels that could potentially cause a lot of trouble, that were fixed, as well as come events or decisions that could end broken.

Between that several tweaks and balances were made: factories save more money, distribute more money to their workers, the LR of SE Asia were changed from vanilla to allow pop growth, to name a few of them, but one of the most important changes was the overseas maintenance costs. 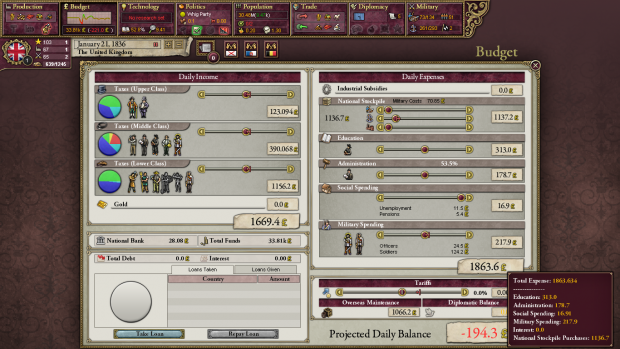 A draft of the changes of the budget screen, trying to highly overseas maintenance costs.

It was eventually scrapped.

Before, each overseas province (defined in the game as a province in another continent without a land connection to the capital) at the beginning of the game costed around 0.6£ to the controlling country in supplies. The value is easily paid even by taxes in the sahara desert which made it mostly a symbolic value. Overseas maintenance now costs 10 times that value. So the UK used to start paying 106£ for its overseas provinces, now that value is 1006£. The objective is to make, at least some colonial provinces, unprofitable. Colonies are costly endeavors and maintaining a colonial empire consisting of nothing but isolated islands was a very cheap endeavor.

There's a small problem with the game definition of overseas province though. Sea straits (the one units can walk over and can be blocked by ships) count as a continuation, so the Gibraltar strait allows Spain to control all of africa paying absolutely no maintenance. Or Russia to stretch from Europe to Japan without paying anything. The same-continent limitation also creates a few problems for big continents, like Europe or Asia. The UK doesn't pay any maintenance for Heligoland, Gibraltar, Malta, Cyprus. Japan doesn't pay for anything for owning polynesia, India or Australia.

To solve that problem, two new continents were done. They work as de facto continents, but are treated as regions since they don't have a button to search in the diplomacy tab. Oceania - which encompasses Australia and New Zealand and Polynesia, which encompasses all of Polynesia, Melanesia and Micronesia. This means that any asiatic (or any country, with a few exceptions) power will have to pay overseas maintenance over these provinces. That's mostly OK because these regions contain just a potential tags, so missing them from the diplomacy tab isn't a big deal. The second change was a restructure of a few straits to try and avoid land connections and the Tangier Protocol to break Spain's land connection with Africa. This can be easily bypassed but it's a start.

There's still a few problematic regions, namely the british islands, the japanese ones and the caribbean. Ideally, each one would be its own "continent": the UK would have to pay maintenance for all its provinces outside of the islands, so would Japan, and so would any nation with provinces in the caribbean, including the USA. The opposite is also true, where any nation outside the islands conquering the UK would have to pay for the provinces there. Japan, thanks to one strait connecting Sakhalin to Asia, would still suffer the problem of not paying maintenance even if it was made a continent. Those are problems I didn't address yet and I'm still not sure on how to deal with.

The last big feature of this update is the fate of the Congo, an event chain SPs can trigger vying for the control of the Congo. 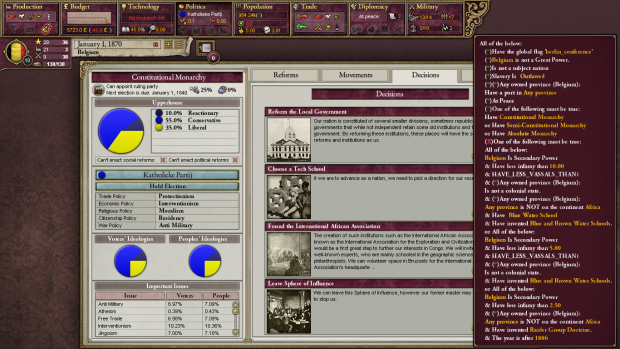 This picture reminds me I still have vanilla localization to fix

Qualifiable SPs can take the decision, which triggers a vote. If the requesting country gets enough votes, they will be given the Congo. Just as a reminder: the decision and event chain is not exclusive to Belgium, you just need to qualify for it. It is exclusive to european nations though. 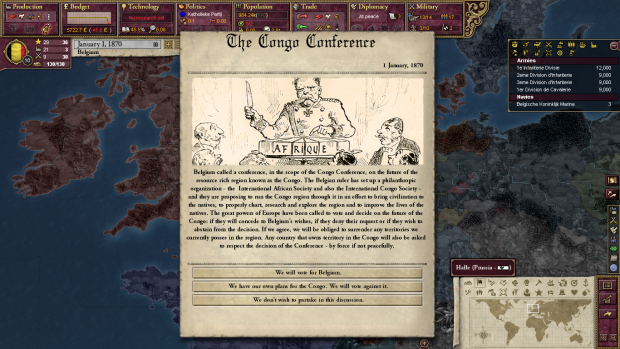 This is the event that GPs get when deciding to vote for, against or not in the Congo question.

Getting the Congo furthers the event, but you get it as a state under a personal union: controlled by the King. 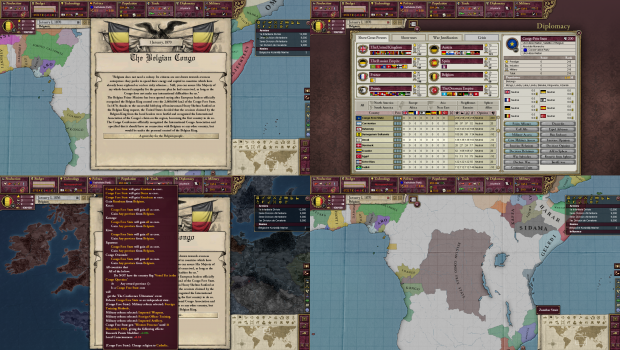 Getting the Congo is just the beginning

Nations that hold any cores of the Congo will receive an ultimatum to give the provinces to the Congo. This can result in war. Colonizing the Congo before will also make the decision go away. 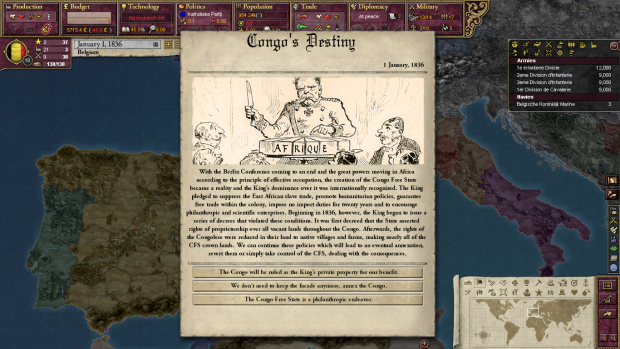 The first option, the historical one, gives you a chance of getting the Congo as a direct colony infamy-free.

Each decision carries advantages or disadvantages. Running the Congo as a philanthropic endeavor is mostly for roleplaying purposes: the nation will keep being a puppet. Integrating it can bring retaliation from the GPs. Going for the historical option will allow you to rule the congo: people may die, you get money, aristocrats get rich. 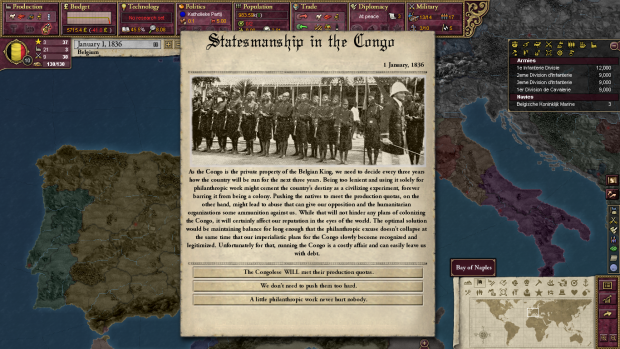 Depending on how you run the country three different endings can happen. Beware though, too much philanthropic work and the Congo will be forever outside your reach, becoming a puppet for life. The other two options will always lead to integration: either the historical option or one ahistorically, with no infamy involved and only advantages. You need to balance administration and have a bit of luck to get it though, things can get out of hand quickly. 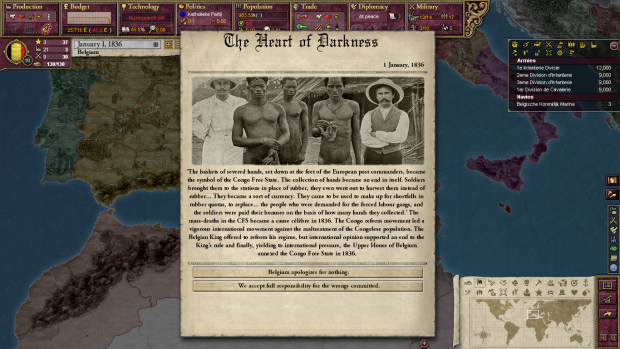 One of the three endings for the Congo

Finally, for the event chain to make some sense, I fixed the pops in the Congo. I changed a few of the "african minor" pops in their own cultures and adjusted the number of pops to the estimates of around 20 million people. Previously, the Congo started the region with 10 million people, which is the number after the Congo Free State was over, in 1924.

That's basically it. There's a few tweaks for the Congo event chain ahead and a word of warning: if you want to play as the Congo, make sure to not pick the philanthropic option. Next version you will be able to pick them without having to save and reload.

That's all for now. I have a few things like commentaries and messages to reply to, sorry if I took too long, I prefer to spend more time working on the mod than doing it. Here's the full changelog:

Where is Portuguese Diu, Daman and French Chandernagar?

Assimilation mechanic is all messed up. Turks dont assimiliate and when controlled by orthodox nations the orthodox still assimilate to islam. WTF?

Thank you for spending your time on this huge work and quickly react to changes!

Are you planing to move the mod to the paradox forum?

No pls let it stay here available for everybody.