The ‘Fort Douaumont’ Verdun sector is almost ready for testing with the detail-passes and scene-building in the levels being done at this very moment. Further Douaumont teasers will follow soon, but for now to whet your appetite here are two further work in progress shots from Fort Douaumont. 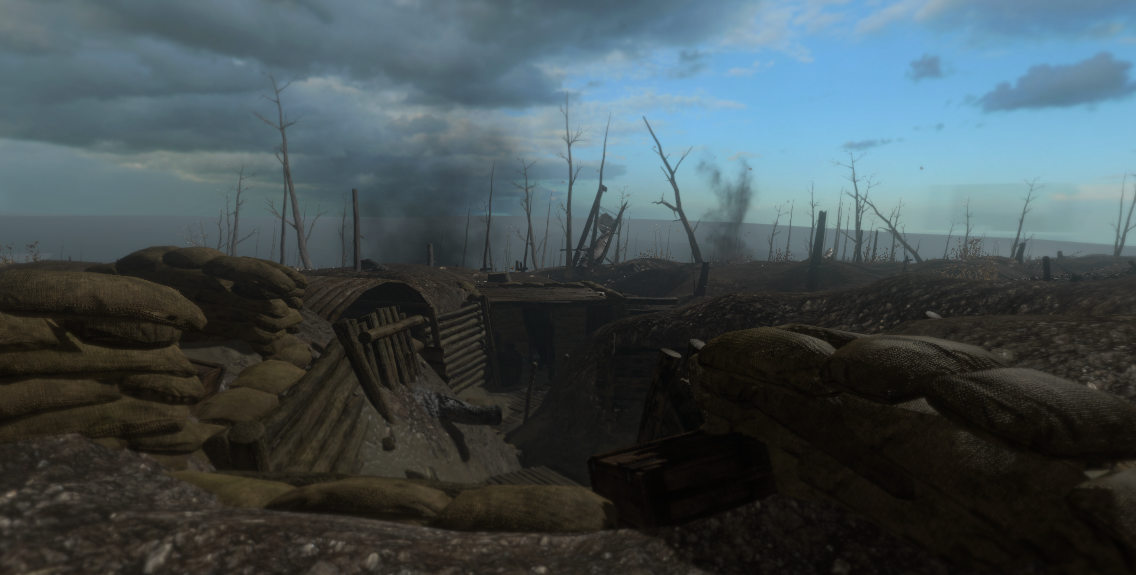 “La Caillette”, the remnants of the woods on the south slope approaching the fort. This will be the French jump-off position. 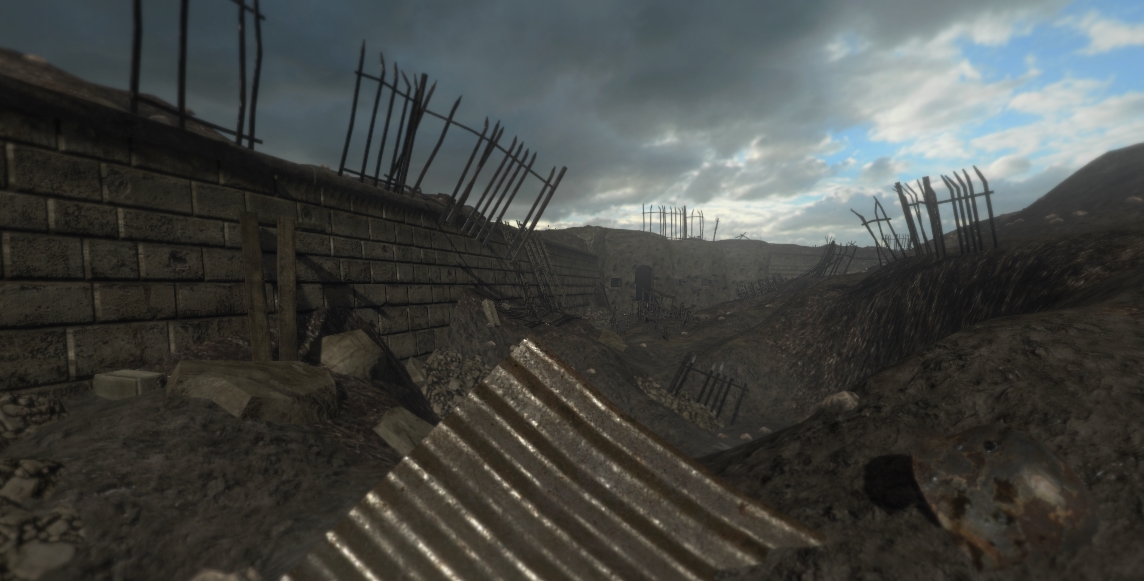 “La Gorge”, view of the “counterscarp gallery” a bunker in the northernmost part of the fosse moat.

Work is also progressing nicely on a new game mode we are proud to announce “offensive’ that will go live in the horrors of war update. One of the features of this historical mode is that the context in which battles took place is explained when loading the level. We anticipate to share more information about this game mode in the upcoming weeks. Loading screens in general will also see an overhaul, when loading the player will be presented with a loading screen of historical images, a map of the region and in-game action packed screenshots. The updated loading screens should see deployment in a patch before the Horrors of War free DLC update.

The new loading screen for argonne, Work In Progress.

The U.S entered the war with little in the way of automatic firearms, most were either too large are too small to be comparable to the use of the rifle. Being issued to troops near the end of the Great War, the BAR proved its worth during the Meuse-Argonne offensive, providing U.S troops with a far more reliable automatic firearm (when compared to the french Chauchat LMG’s) The BAR’s impact on the overall war was small, but it the brief action is saw it was so successful that many countries would go on the place orders of the firearm during and after the war ( With france requesting some 15,000 to replace the underperforming Chauchat) 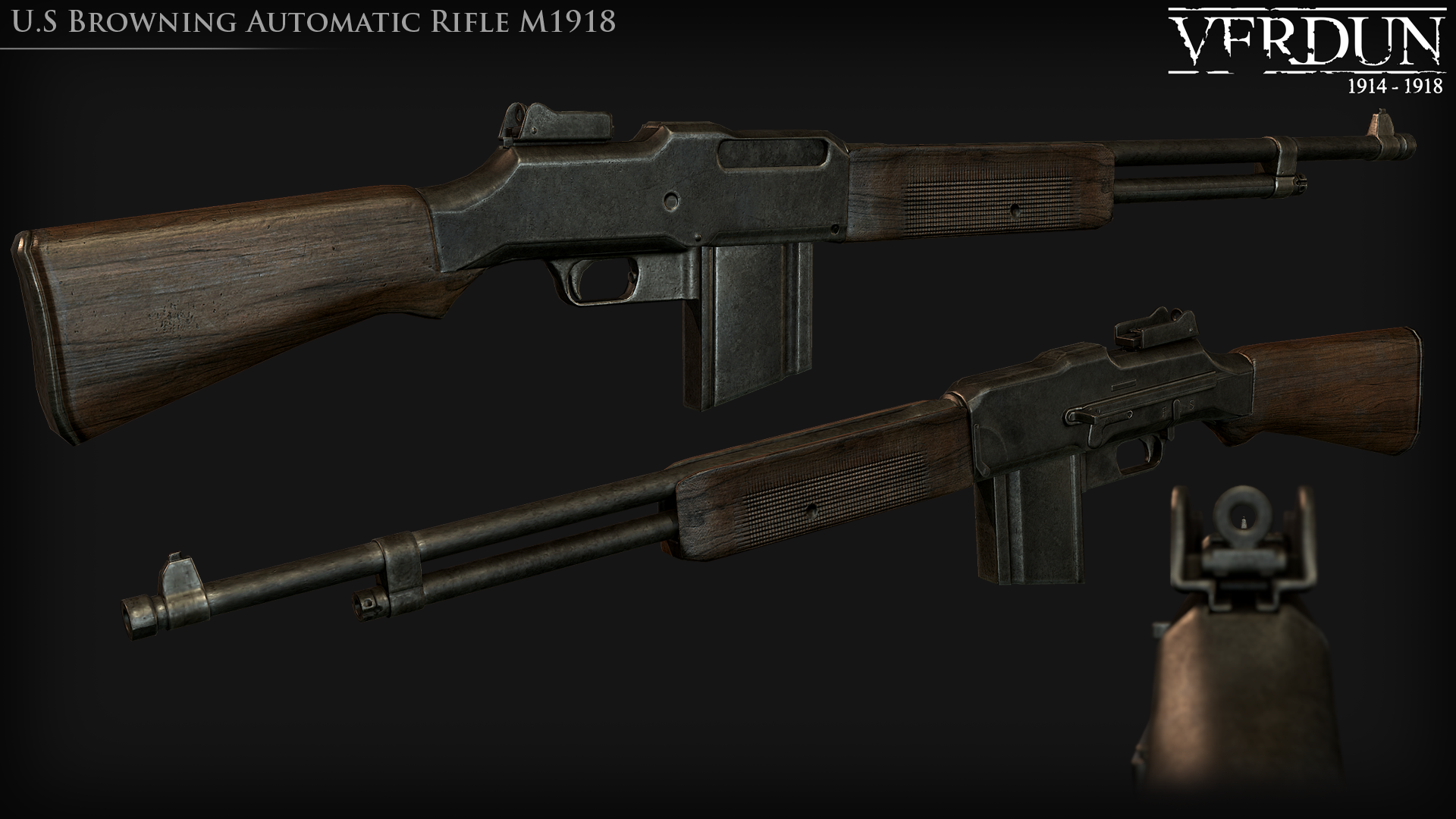 The BAR will see use with the U.S Doughboy squads in Verdun. With an effective rate of fire and reasonable handling, the BAR will be inhibited by its small magazine capacity. In the right hands this piece of kit should prove to be as effective as it did in it’s brief action of the war. A brief action which lead to nearly a half a century of action.

Soldiers left to their own devices will often create their own devices. This weapon is a perfect example of men adapting to a new war they must now fight. Little official information exists in regards these sawn down rifles - as defacing your equipment was a punishable offence … thusly soldiers converting these modifications were rather quiet about it. The sawn down SMLE was a popular weapon amongst british tunnelers and trench raiding parties. Come WW2, a number resistance fighters could be found using these sawn down rifles. This leads to the assumption that, rather than face the wrath of the quartermaster, the soldiers in ownership of these modified rifles simply sold them to the local populace. The weapon also saw use as in improvised grenade launching device. 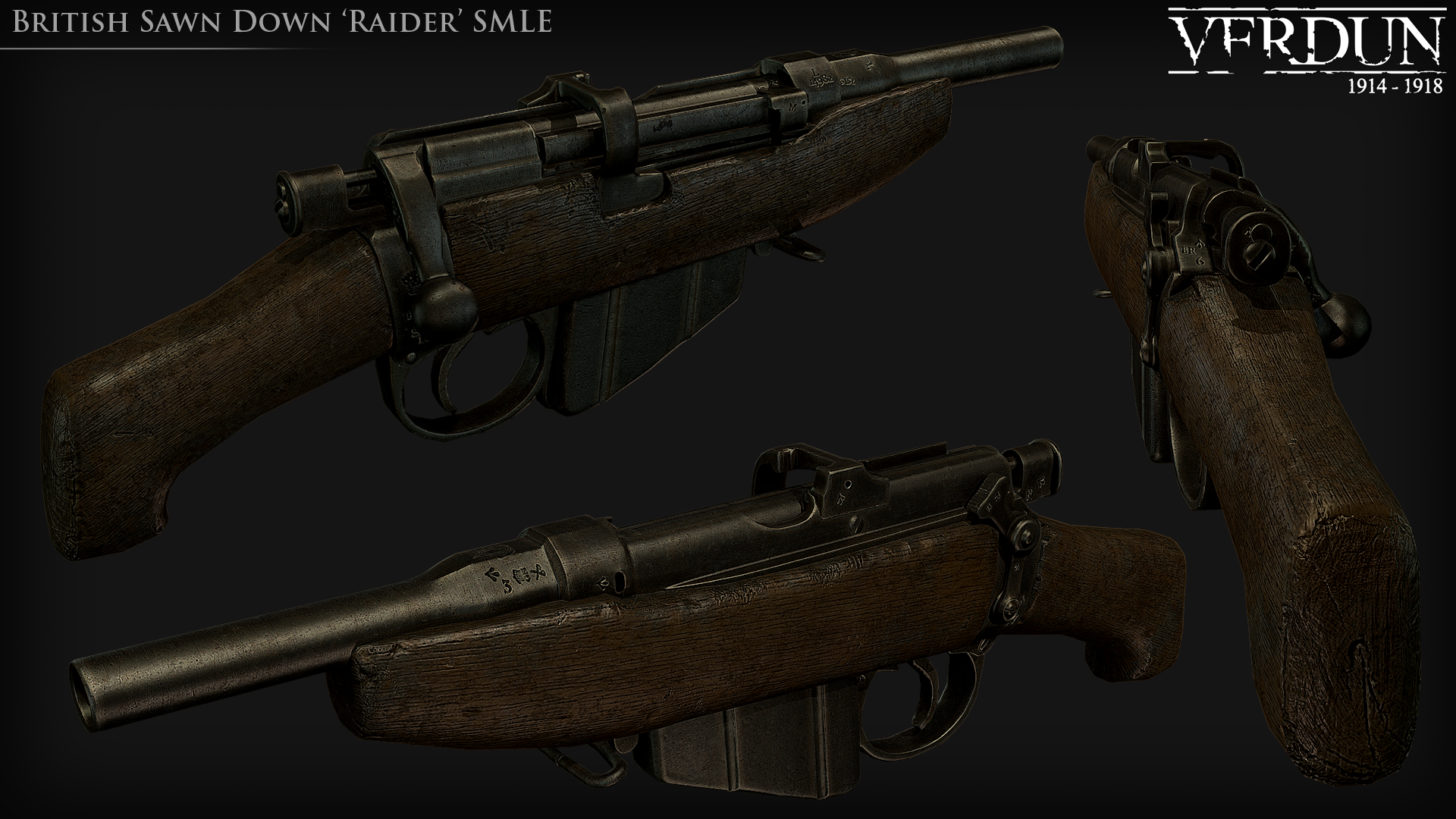 The SMLE ‘sawn off’ in game will be issued to troops whose role it is to storm trenches, and will be an interesting addition to ‘Attrition’. Very difficult to hit anything with at a far to medium distance, in close quarters the accuracy will still be questionable. The benefit of having 10 hard hitting rounds will come in handy, if the user is fortunate enough to hit his targets.

In preparation of the great spring offensive of 1918 the Germans looked at upgrading their infantry's assault capabilities. One of many innovations undertaken was modifying the heavy and cumbersome MG08/15 (which itself was a lighter version of the MG08 HMG) The water cooled barrel was replaced by an air cooled variant and a carrying handle was fitted, making the weapons much lighter and easier to handle. Very few eventually saw action on the front, with most being used to counter the Allied 100-day offensive in 1918. 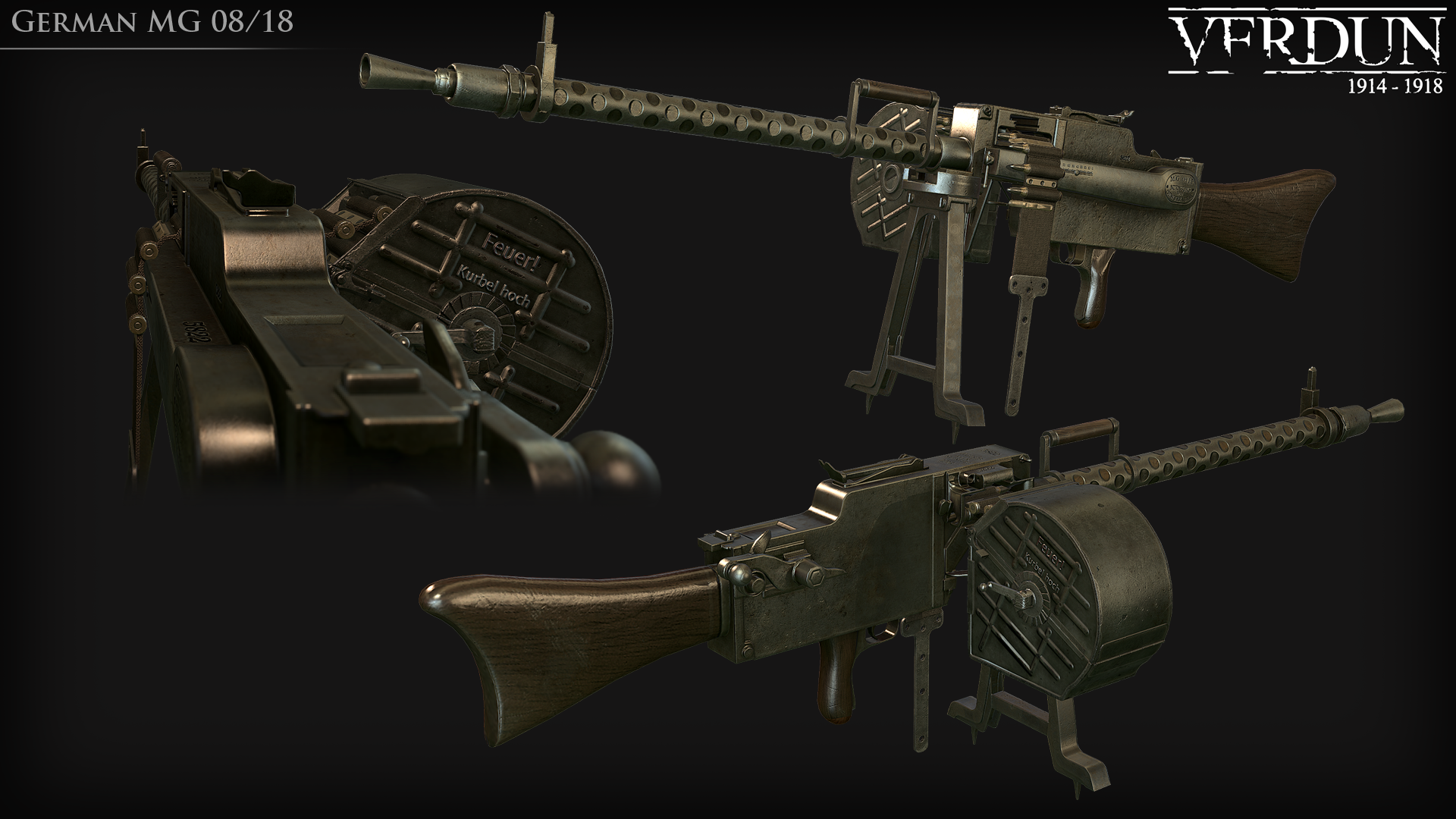 The MG08/18 will see reduced accuracy to simulate the loss of performance of the gun due to barrel overheating (the air cooled barrel wasn’t particularly effective vs a watercooled one). With the lighter weight the recoil will be a little more aggressive when compared with the mg08/15, however overall handling will be slightly better.

When the U.S joined the war in 1917, they arrived in France with a wide arsenal of weaponry. They did not, however, arrive with the necessary experience needed for the ‘modern war’, trench warfare. Throughout the conflict, European armies had never really looked into using shotguns, such weapons were seen as cruel, and military leaders on both sides considered shotgun use to be ‘barbaric’. The generals of the European forces prefered the bayonet, the rifle, the machinegun as a less ‘barbaric’ weapons. German forces would often execute U.S soldiers caught with shotguns or shotgun ammunition, as the weapon was utterly devastating when used within an enemy trench. 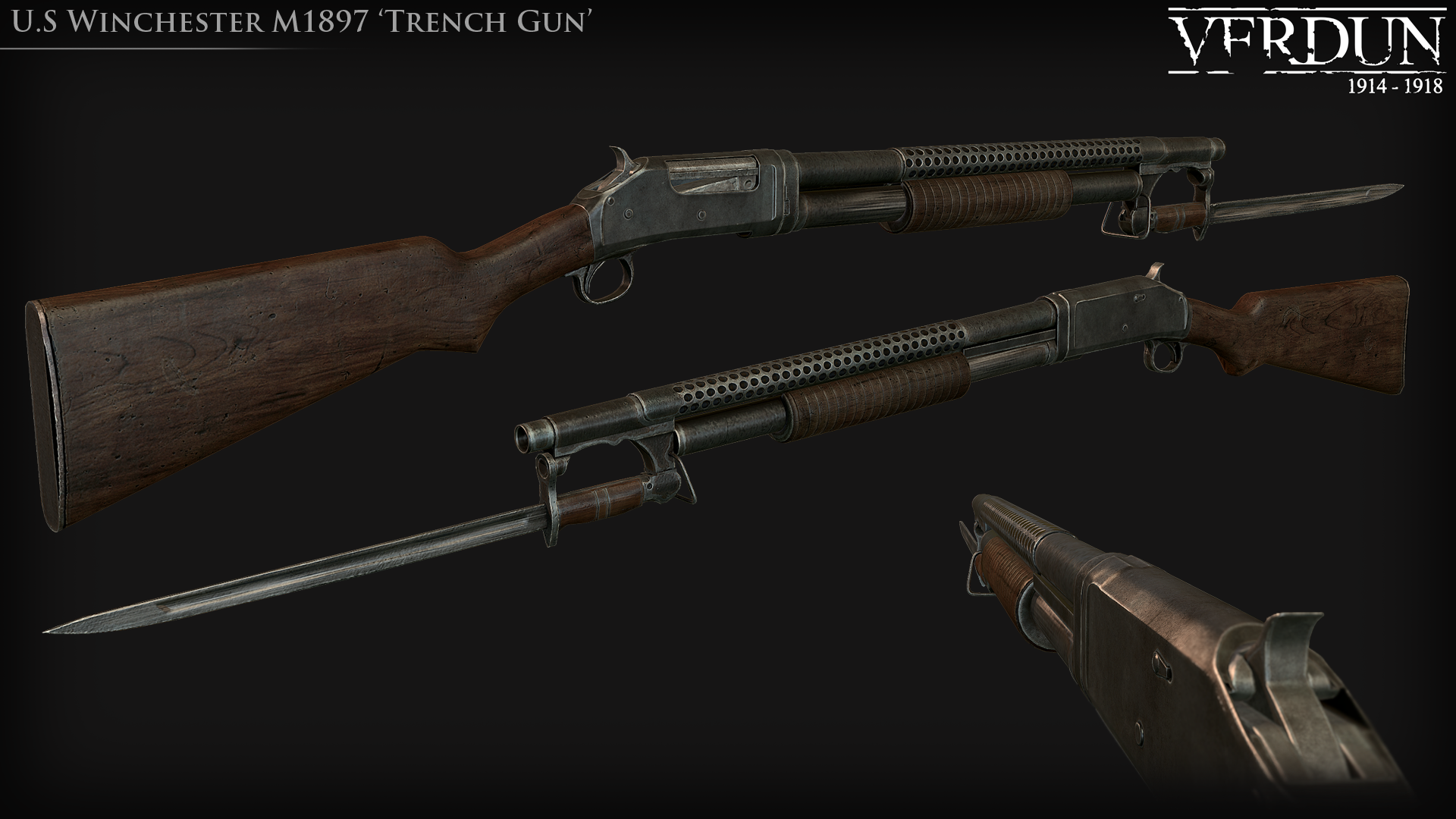 The M1897 will be a weapon choice for one of the US marine squad roles, it will be the duty of the soldier to use their weapon to reduce entrenched defenders to nothing. The shotgun will be extremely effective in the confined spaces of the trenches, but will be almost useless at mid-long range. It will be contrasted with the German close range assault weapon, the flamethrower.

Work again continues on the optimization. We are currently redoing the way in which the game handles the level of detail (LoD) system. The basic system in unity makes elements pop in-and-out of existence and this can become noticeable pretty quickly. What we intend to do is make a more seamless transition to the lower detail pieces, using random patterns and fading techniques. Doing this will have a dramatic impact on the performance and we expect good results to come out of this by the end of the week. We are also exploring optimisation of materials and some other aspects of the game world that might impact performance.

Stosstruppen raid in the Argonne, again supplied by community member echo1. We love browsing the screenshots you guys take! so please keep hit the f12 key! 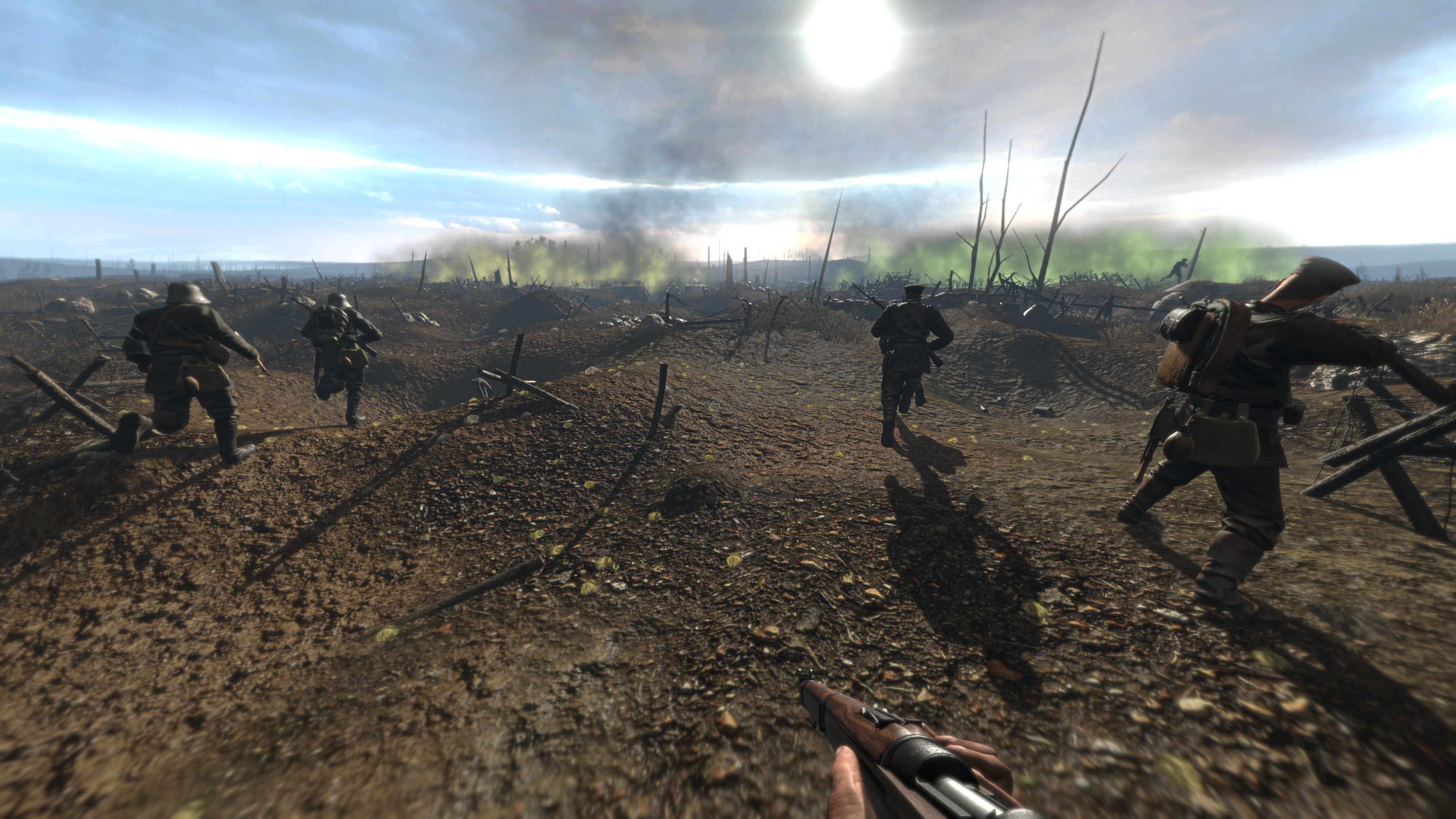 So, again, do stay tuned for next week’s update and thanks for tuning in! Next week we will introduce some imperial veterans!