In this article i will give some spoilers about the factions and their troops, architectur, history and culture. 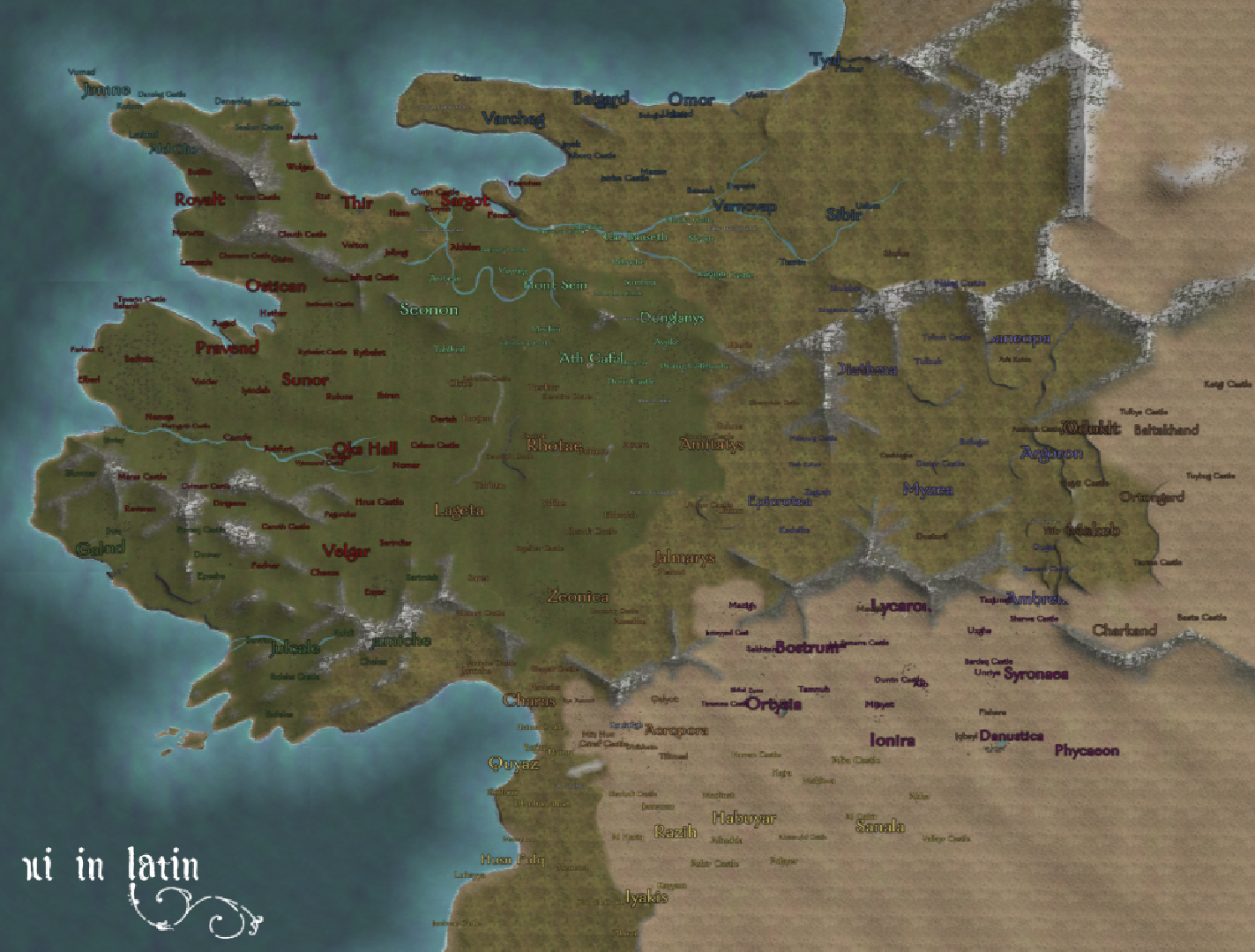 Calradia is 1043 fragmented into 10 factions. In the heartland, the empire rules, in the west the Vlandians seek to gain control of the country's entire west coast by conquering the highlands of the Rhodoks, who have lived as small clan communities since the retreat of the Empire from the area. To the northwest is the island of Jumne, a trading hub that connects the south and north of Calradia and is now more of a shadow of its old glory. Their most important trading partners are Sturgians, a people that stretches across the entire north coast. South, in the great forest of Calradia, is the ancient kingdom of the Battanians, whose talented archers teach the Imperial anxiety and terror. In the Far East, the Khuzaits have gathered all the rider tribes under the charismatic Monchug Khagan, willing to lead them to the west. But that is not the only danger, the desert has spawned a tough warrior people ready to leave their desolate deserts and colonize the fertile plains of the Empire. A massive war is brewing on the continent. Will you turn the fortunes of the kingdom on war or peace?

Since the Vlandians were able to take over the breadbasket of Calradia, Swadia, their empire was full of prosperity and power. Their armored horsemen, called knights, are everywhere feared. Your feudal system is very efficient over time. Now that the Empire is once again in civil war, the Vlandians are determined to secure and consolidate their claim to the west of Calradia for all.
Their army consists of a partly light, but also mailed heavy infanerie. Their ranged fighters are to be laughed at in the telegraph, not least because they use both armband and bow alike. They can not compete with the Battanians. The enemy lines are easily broken by their knights and gallants.
The lazy and lethargic King Derthert Meroc, however, does not really know how to make good use of the overflowing resources of his empire. Many big houses like the Thirs, Arromancs or Jelinds like to dance the king on the nose. However, his successor, Prince Bryon, is already working on a plan to lay the dog work for his incompetent father ...

Inspired by the Franks and western europe

For hundreds of years, peoples living in the deep forests have called themselves the Battlans. A tough, partly nomadic people who can score with their talented archers in every battle. Your King, Caladog Derngil is an old and wise man who prefers to do the fortunes of the Empire with diplomacy rather than force. Their cities are sometimes even made up of the ruins of Californian buildings that left the empire here hundreds of years ago, at the height of Californian power. After the recapture of their land, the Battiers could consolidate their claim to the great forest, and show the rest of the continent that a legion of emperors can not even do anything against them in their forests. Their infantry and archers are tough and feared, cavalry are used, but little attention is paid in the struggles of a dense forest.

Inspired by Anglo Saxons and Welsh

The Calradian emperors could only be stopped by a little. One, however, was the wide steppes of the East. where infrastructure ceased and grazing landscapes did not seem to end, even the caladas failed. In this country live numerous equestrian tribes, which have been united for some years now under the banner of Monchug Kahagan. These barbarian hordes pose a threat to all civilized peoples of the west. Their light mounted archer can not be caught by any cavalry, their bows are a deadly weapon, deadly at 200 feet. Her heavy cavalry is equipped with alien weapons and sabers, against which a Californian Legion, designed to fight foot soldiers, is powerless. In the open field, they throw away all understanding of warfare

Inspired by Turkic peoples and Mongols

The Sturgians live on the northern coast of Calradia. They are an amalgamation of numerous clans and principalities that share power in the area. The king of Balgard rules over a realm of eternal fir forests and torrents. The region is home to large wild animals, which is why the traders come from all parts of Calradia because of their fur. Their warriors are known throughout Calradia for their size and fighting strength. Even a small ammount of their soldiers make up a powerful party. They mostly come across the sea, driven by prey and blood, and sometimes massacre themselves deep into the valley of the Vlandians.

Inspired by the Vikings, Lithuanians and Rus

In the recent centuries, the Calradia have been able to control almost all of Calradia. They ruled over a vast empire, from the Western Sea to the uninhabitable borders of the continent in the east. Only the northernmost kingdoms could fend them off. But Normans invasions or the strengthening of the Vlandians could not stand the empire, which had long been overstretched. One crisis chased the next, the republic gave way to the dictatorship that was to become a monarchy. These 3 forms of government will also flare up in their new civil war, and that will be richly third.

Their army is incredibly strong, disciplined and well equipped. Their legions were the backbone for centuries of dominance on the continent. They all carry large shields, depending on the climatic plates or lamellar armor, and fight with crossbows and long spears. The Praetrian is the country's elite unit, they are the Empress's bodyguard, and are the best unit in the game.

The Vlandians have shared the Chalbek peninsula for ages with the Northmen, a small volk who are known for their fast ships and their extensive trade networks. But they are also fierce warriors, and their highlevel infantry can defeat large numbers of armies.

This faction does not exist in Bannerlord. Unfortunately there are no Vikings in Bannerlord and I really liked the Nords. In addition, this small faction has its own shame to breathe life into the peninsula. I noticed that the northern regions of Vlandia are quite boring and offer a retreat in the event of a war because no army can get this far. So I changed that. The Northmen have an alliance with the Vlandians, if one day it should break, the strongest faction in the game would effortlessly roll over them ...

For centuries, wild tribes have lived in the mountains of the south, which until now could only subdue the empire. However, the Rhodoks have recently waged a war against a new enemy: the Vlandians from the north.

There are also no Rhodoks in Bannerlord. In the old version of the mod, there were also the Rhodoks, because I think they fit the scenario very well. The Rhodoks in the mod are very different. Many have suspected that the Vladians in Bannerlord are a mixture of the Swadians and Rhodoks from native, that is, crossbowmen, lancers and knights. But that's not true. Bunduk tells us that the Rhodoks once belonged to Swadien and rebelled against the foreign regime about 40 years ago, becoming independent. But who conquered the Rhodoks back then? And how? I made some things right here. The Rhodoks were conquered by the Vlandians, the predecessor of Swadia, before the Nords could conquer the home of the Vlandians, Sargot and Thir. (This allowed the Swadians as the largest ethnic group to take over the government of the empire, because a Vlandian Realm without Vlandians is not a Vlandia) At that time, the Rhodoks were not using crossbows and lances. These weapons were only used when an effective weapon was brought up against the Swadic Cavalry. And after 200 years there was finally enough know-how in the country to implement something like this. But that wasn't the case at the time of XI in Latin. The Rhodoks are a wild bunch that doesn't really work together, but is divided into clans. In addition, they must have used more primitive weapons, because the Rhodoks would never have been subjected to broken arms and spears. So in XI in Latin they use completely different weapons, weapons that are used in the mountains. Short and quick bows and short swords and axes, plus small shields. These weapons make the Rhodoks serious infantry, but everything is hopeless against cavalry. Rhodoks are overrun by cavalry.

The Rhodoks are based on the Scots. They are fighting a Gurellia war against the Vlandians. Without the player's influence, they are hopelessly put down. a few years later, in the Banner Lord scenario, the Rhodoks are subjugated and the Vlandians can turn their eyes to the east ...